91mobiles.com
Home News WhatsApp now has over two billion users around the world 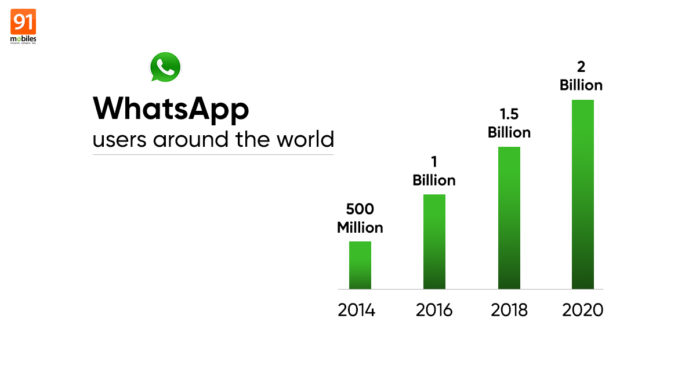 “WhatsApp has added over 1.5 billion users since its acquisition by Facebook for almost $21.8 billion in 2014”

WhatsApp has over 2 billion users across the world, the company announced in its blog post. The social messaging platform, which was acquired by Facebook for almost $21.8 billion back in 2014, had only 500 million users. It touched 1 billion users in 2016 and 1.5 billion in 2018. WhatsApp is now just behind its parent company Facebook, which has 2.5 billion users – per The Wall Street Journal report. WhatsApp’s sister company Instagram, meanwhile, has a little over 1 million users, based on a report from June 2018.

WhatsApp used the milestone to remind us of the importance of end-to-end encrypted messages. “Message(s) sent using WhatsApp is secured with end-to-end encryption by default. Strong encryption acts like an unbreakable digital lock that keeps the information you send over WhatsApp secure, helping protect you from hackers and criminals. Messages are only kept on your phone, and no one in between can read your messages or listen to your calls, not even us,” the company said in its blog.

“Strong encryption is a necessity in modern life. We will not compromise on security because that would make people less safe. For even more protection, we work with top security experts, employ industry-leading technology to stop misuse as well as provide controls and ways to report issues — without sacrificing privacy,” it added.

In related news, WhatsApp is all set to launch its UPI service in India. It recently received the approval from the Nation Payments Corporation of India (NPCI) to launch WhatsApp Pay in India after trying for over two years. The service, which is in trial period at the moment, will allow users to make payments without leaving the app.