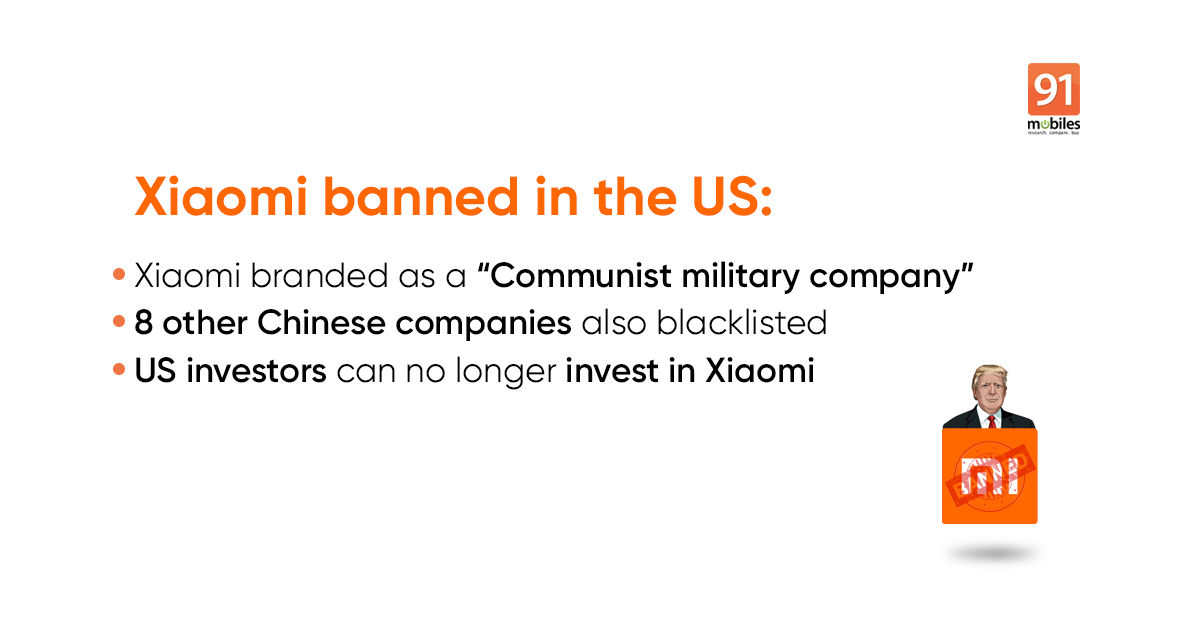 Xiaomi Corporation has been branded as a “Communist military company” by the US Department of Defense (DOD), leading to the company being blacklisted in the country. Eight other Chinese companies have also been blacklisted by the Donald Trump-led US government, including China’s state-owned plane manufacturer Commercial Aircraft Corp. of China (Comac). The US DOD claims these companies are a part of China’s “Military-Civil Fusion development strategy”, through which the Chinese military uses the technologies and expertise acquired and developed by civilian companies, universities, and research programs.

Xiaomi does not sell any smartphones in the US, and only sells internet-connected air purifiers, security cameras, bulbs, plugs, projectors, TV streaming sticks, etc.

Xiaomi Corp. shares plunged more than 11 percent after the news was released. Xiaomi is one of China’s biggest technology companies and competes with Huawei Technology Co. for the title of the No. 1 Chinese mobile device brand. Alongside smartphones, the company makes wearables, audio products, electric scooters, laptops, and more. Previously, the Trump administration had also blacklisted Chinese smartphone and telecom giant Huawei and Semiconductor Manufacturing International Corp., which is China’s largest chipmaker.

Read more: What does the US ban mean for Huawei, and more importantly, for Indian smartphone buyers

Following this move, US investors can no longer invest in Xiaomi or any of the other 8 companies. Not only are people banned from purchasing new securities and shares of these companies, but those who hold existing holdings will have to divest the same by November 11, 2011.

The eight other companies banned by the US DOD include:

A US Department of Defense release stated, “The Department is determined to highlight and counter the People’s Republic of China’s (PRC) Military-Civil Fusion development strategy, which supports the modernization goals of the People’s Liberation Army (PLA) by ensuring its access to advanced technologies and expertise acquired and developed by even those PRC companies, universities, and research programs that appear to be civilian entities.”

Xiaomi says it “has been in compliance with law and operating in compliance with the relevant laws and regulations of jurisdictions where it conducts its businesses. The company reiterates that it provides products and services for civilian and commercial use. The company confirms that it is not owned, controlled, or affiliated with the Chinese military, and is not a “Communist Chinese Military Company” defined under the NDAA. The Company will take appropriate course of actions to protect the interests of the company and its shareholders. The company is reviewing the potential consequences of this to develop a fuller understanding of its impact on the group. The company will make further announcements as and when appropriate.”