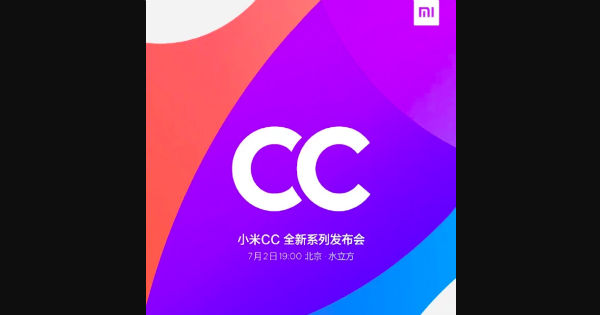 Last week, Xiaomi announced a new smartphone series called CC, though there was no mention of any particular model or when it would be launched. Now, the brand in a Weibo post has announced that the first Xiaomi CC series smartphones will be launched on July 2nd. Along with that, the specifications of Xiaomi CC9 and CC9e smartphones have been leaked in their entirety, showing the two handsets will be mid-range devices. Moreover, the prices of the variants of the two Xiaomi CC9 series smartphones have been revealed too thanks to the leak. This comes soon after the first live image of the CC9 handset leaked online, revealing an all-screen front panel. 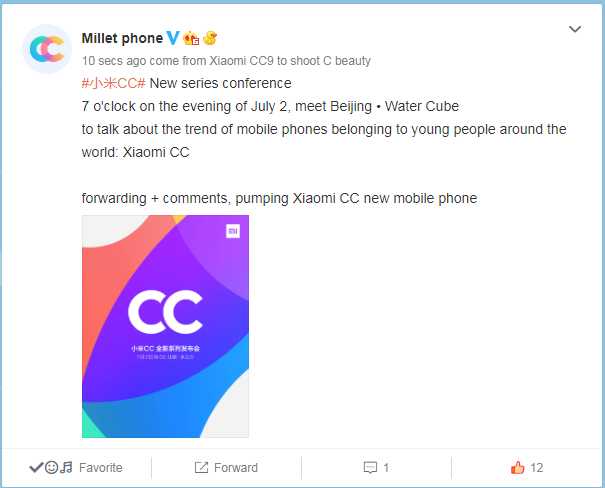 In a Weibo post, the official Mi account said the company plans to launch the first Xiaomi CC series smartphones at 7pm on July 2nd. The event will be held in Beijing, but the official names of the phones that will be unveiled hasn’t been revealed yet. To recall, the brand last week said CC stands for ‘Colourful and Creative’ and is aimed at the youth. We can expect multiple colour options and unique designs on the handsets. In fact, the first leaked teaser poster had revealed a device with flip camera module, similar to what we have seen on the ASUS 6Z in the past.

Separately, tipster Mukul Sharma has revealed the Xiaomi CC9 and CC9e prices and specifications. According to an image shared on Twitter, the latter will feature a 5.97-inch AMOLED full-HD+ display with 1,080 X 2,340 pixels resolution and a waterdrop notch. It has been listed with the Snapdragon 710 SoC, paired with up to 8GB RAM and 128GB (eMMC 5.1) storage. In terms of optics, the Xiaomi CC9e is said to feature triple rear cameras with 48-megapixel Sony IMX582 primary sensor, an 8-megapixel secondary sensor and a third 5-megapixel lens. A 32MP Samsung GD1 front-facing shooter is on board for selfies. A 3,500mAh battery with 18W fast charging support fuels the phone. The handset is likely to boot Android 9.0 Pie with MIUI 10 custom skin on top.

On the other hand, the Xiaomi CC9 will reportedly ship with a larger 6.39-inch AMOLED full-HD+ display with 1,080 X 2,340 pixels resolution and could be powered by the octa-core Snapdragon 730 SoC. It is said to come in three variants — 6GB + 128GB, 8GB + 128GB, 8GB + 256GB storage. As for the cameras, the handset is said to feature triple rear cameras with 48-megapixel Sony IMX586 primary sensor, a 16-megapixel secondary sensor and a third 12-megapixel lens. A 32MP GD1 front-facing shooter is on board for selfies. A 4,000mAh battery with 27W fast charging support fuels the phone. It is also expected to run on Android 9.0 Pie with MIUI 10 custom skin on top.