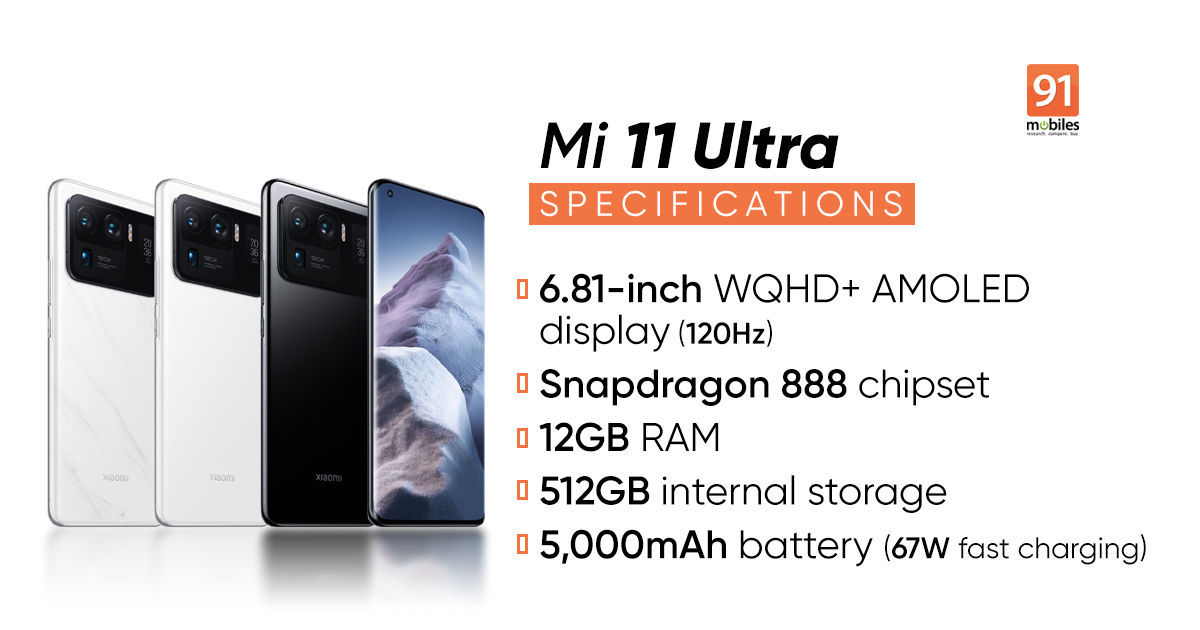 Xiaomi Mi 11 Ultra will make its India debut next week on Friday, April 23rd. The so-called “Superphone” from the brand was globally announced in China a few weeks back. The company is now bringing the Mi 11 Ultra to the Indian market to compete with the likes of Apple and Samsung in the premium segment. As you might be aware, the Mi 11 Ultra features a unique rear camera setup that comprises a secondary screen. It also sports a 120Hz 2K resolution screen and is powered by the latest Snapdragon 888 chipset. So before the phone makes its way to the country, here is a quick roundup of the smartphone, its expected specifications, and price in India.

Also read: Xiaomi Mi 11 Ultra and Mi Band 5 have this feature in common

Xiaomi has officially confirmed that Mi 11 Ultra will make its debut in India on April 23rd. The launch event of the new Xiaomi smartphone is expected to be live-streamed online. We still don’t have exact details of the event, and the launch timings.

While the official Mi 11 Ultra price in India will be announced on April 23rd, we can closely compare its price in China to get an idea. The phone has launched in China with a starting price of RMB 5,999 (approx. 67,000) for the base variant of 8GB RAM and 256GB storage. You also have a 12GB RAM variant that comes with 256GB and 512GB internal storage options. These two variants are priced at RMB 6,499 (approx. 72,500) and RMB 6,999 (approx. 78,100), respectively. All these figures, and going by the overall features on offer, it is easy to suggest the Mi 11 Ultra price in India will be upwards of Rs 70,000 in India. Anything below that, and Mi 11 Ultra will be on a lot of people’s buying list.

Since the Mi 11 Ultra has launched in China, we have a good idea about its capabilities. The Mi 11 Ultra features a 6.81-inch AMOLED display with support for 2K screen resolution, 120Hz refresh rate, and HDR10+ Dolby Vision. It gets Corning Gorilla Glass Victus for protection. The device is powered by the octa-core Snapdragon 888 chipset that comes paired with up to 12GB RAM and offers 512GB internal storage. The handset includes a 5,000mAh battery with support for 67W fast wired and wireless charging. On the software front, Mi 11 Ultra runs on MIUI 12 version built over the Android 11 operating system.

The most unique part about the device is its camera. The Mi 11 Ultra comes with a small secondary screen at the back with the camera module. This screen acts as a viewfinder and allows people to use the rear camera to click selfies. As far as the imaging prowess of the phone is concerned, Mi 11 Ultra gets a 50MP primary camera, a 48MP telephoto camera with 120x digital zoom support, and a 48MP wide-angle sensor. On the front, you have a 20MP camera.