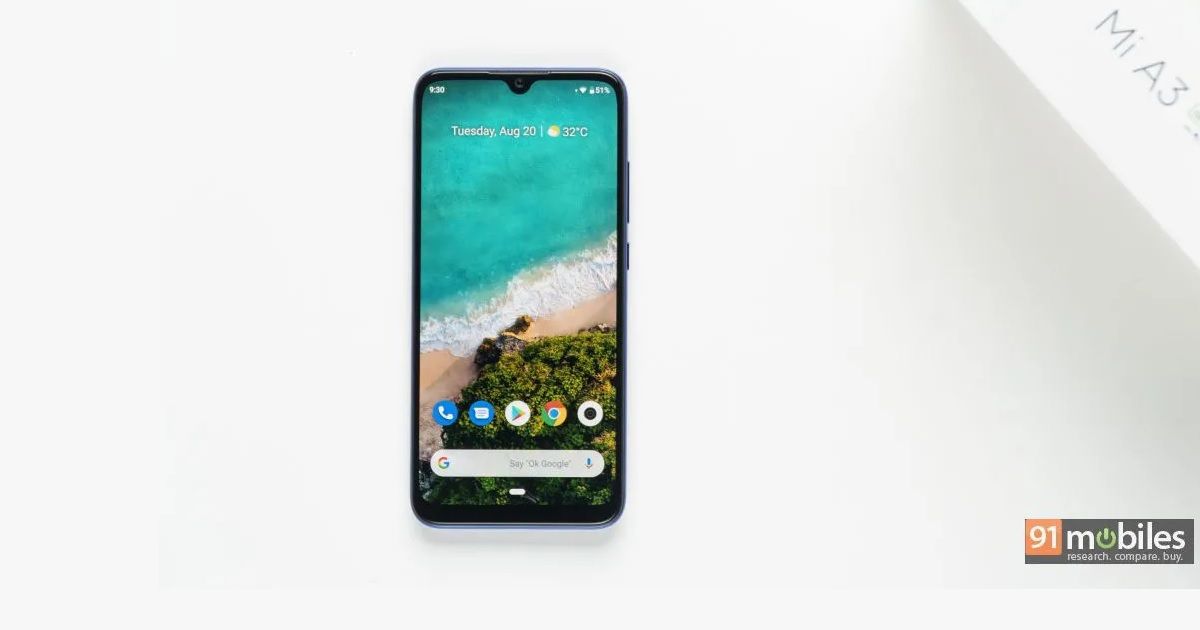 “The Xiaomi Mi A3 is a huge upgrade over its predecessor as it comes with an under-display fingerprint sensor, triple rear cameras and a beefier battery”

Chinese electronics giant Xiaomi introduced its first Android One series phone called the Mi A1 around two years ago. Today, the company has launched its third such offering, aptly dubbed the Xiaomi Mi A3 in India. The successor to the Mi A2 (review) brings a handful of upgrades over its predecessor. In fact, the A3 marks a lot of firsts for the brand’s Android One series of devices, including an in-display fingerprint sensor, a triple-camera setup at the rear, and a waterdrop notch. I got a chance to play with the Xiaomi Mi A3 for a while, and here are my first impressions of the phone.

Inside the retail packaging of the Xiaomi Mi A3, you’ll find a TPU case, a wall charger, a USB Type-C cable, a SIM ejector tool, some documentation, and the phone itself. Sadly, the brand hasn’t bundled a set of earphones.

Starting with the design, the Xiaomi Mi A3 sports a solid build quality. Not only does it ship with Corning Gorilla Glass 5 at the front and back, but it also protects the rear camera module with the same coating. The phone also looks quite premium as it features a glossy finish at the back which coupled with the curved edges on the rear, offer good ergonomics too. The smartphone’s triple rear camera setup is placed vertically on the top left corner, while the power and volume rocker are placed on the right side. Notably, the phone brings back the 3.5mm headphone socket, which was axed on its predecessor. There’s also an infrared sensor on top. It’s also worth mentioning that the handset also sports P2i nano-coating for splash resistance.

Moving on, the Xiaomi Mi A3 offers a 6.08-inch Super AMOLED display with a layer of Corning’s Gorilla Glass 5 and a Dot Drop notch. Unfortunately, the screen offers HD+ resolution, while similarly-priced phones offer at least full HD+ screens. But the phone does features Widevine L1 support, so you can stream HD content from apps like Netflix. The under-display fingerprint sensor of the phone unlocks it pretty quickly too, which is great.

Software-wise, the Mi A3 boots vanilla Android 9 Pie out of the box. Thanks to the pure Android experience, there’s no bloatware onboard the smartphone. It comes with features like Google Assistant and Digital Wellbeing. As part of the Android One program, Xiaomi’s latest can be expected to receive guaranteed software updates for at least two upcoming versions of Android, including the Android Q and R updates.

Talking about the performance, the Xiaomi Mi A3 is powered by the Qualcomm Snapdragon 665 processor, making it the second phone in the country after the Realme 5 with this chipset. The 11nm processor offers a clock speed of up to 2.0GHz, and is accompanied by an Adreno 610 processor. The phone comes in two RAM and storage variants – 4GB + 64GB and 6GB + 128GB. During our quick usage of the device, it performed very well without any lag or so whatever.

In terms of imaging, Xiaomi’s Mi A3 features a 48MP primary camera at the rear, which offers PDAF and 4-in-1 Super Pixel. There’s also an 8MP ultra-wide-angle secondary snapper and a 2MP depth-sensing camera. The phone supports 4K video recording at 30fps, and offers EIS. For selfies, there’s a 32MP AI camera housed in the notch, which offers full HD video recording at 30fps and AI face unlock capabilities. The connectivity options are standard. Lastly, a 4,030mAh battery with support for Quick Charge 3.0 18W fast charging technology completes the list of the specs.

The Xiaomi Mi A3 price in India starts at Rs 12,999, making it a decent mid-range smartphone with the vanilla Android 9 Pie experience. However, it will face stiff competition from the likes of the Realme 5 (review), which is available starting at just Rs 9,999 with four rear cameras and the Snapdragon 665 SoC.