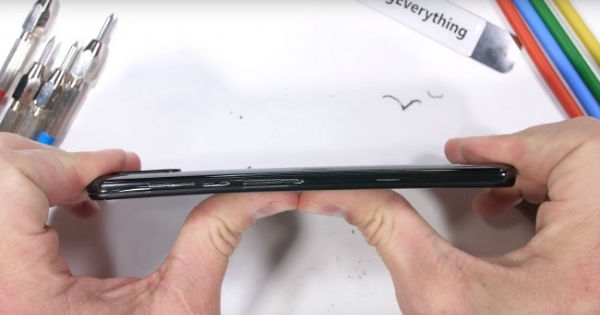 The first wave of manual sliding smartphones is in and the Xiaomi Mi Mix 3 (first impressions) happens to be one of the most anticipated phone since its launch in China last year. As is the case with all sliding smartphones, the durability of the manual slider and the phone has been under question. As usual, the popular YouTuber Zeck Nelson of JerryRigsEverything fame has taken it upon himself to put the smartphone through his brutal battery of durability tests.

As usual, the YouTuber starts by unboxing the Mi Mix 3 and giving a brief introduction of the handset. He then proceeds to pit the display against his signature Moh’s pick test for scratches. Xiaomi has equipped the Mi Mix 3 with a layer of Corning Gorilla Glass 5 and as expected, the screen develops scratches at level 6 and deeper grooves at Level 7. What this means is that while the display is protected against your everyday carry like keys and coins, sand particles and pocket lint might still leave a mark on it. Nelson then takes his razor all over the smartphone revealing that the side of the top part is crafted from plastic, while the main chassis has metal. The front cameras, flash, metal earpiece, rear ceramic panel and camera also came out unscathed against the razor as expected. However, the ceramic panel on the back does get scratched with Moh’s pick number 6.

Moving on, Nelson picks up his gas lighter to test the display against open flame. The screen panel lasts a good 20 seconds before turning white. However, the panel doesn’t completely recover from the damage as the white spot gets dull but doesn’t disappear. The most brutal of all, the bend test was reserved for last but the Mi Mix 3 handled the pressure like a champ. The smartphone did not even slightly give in while Nelson was pushing on the display and the back panel with all his might. This goes on to show that the higher production costs for Mi Mix 3 series are actually worth it. However, the YouTuber made an interesting observation in the beginning of the video. Holding the smartphone against a light source reveals that there is a considerable gap between the top and bottom part of the sliding mechanism, which means that there are changes of dust particles and lint getting stuck in between the two layers and obstructing the mobility over time.

The smartphone is yet to be launched globally. However, Xiaomi has announced an event at the upcoming MWC 2019 on February 24th and we have our hopes high.