There’s still a fair amount of time before the Xiaomi Mi 4 (unboxing and first impressions) reaches our shores. We don’t have an inkling of the outlay involved yet, but if the Mi 3’s pricing is any indication, the latest flagship should also be priced quite aggressively. And we all know how that’s likely to play out, don’t we? Considering the loaded specs it offers, the Mi 4 is certainly a scorcher, and should take anything head-on when it comes to performance. Just to remind you, the Mi 4 is powered by a quad-core Snapdragon 801 processor clocked at 2.5GHz, mated to 3GB of RAM. However, it remains to be seen how the competitive landscape changes when the device actually lands in India. That said, we’re still quite keen to figure out how it performs. We have a unit with us, and decided to run a few standard benchmarks to see how it fares. Each benchmark was run thrice, after a fresh reboot to clear out the memory, and the best results taken into consideration. Here are the results.

AnTuTu is one of the most popular Android benchmarks, and is widely regarded as an industry standard while comparing different devices powered by Google’s mobile OS. The programs comprehensively tests all aspects, including CPU, RAM, graphics, generating a total score at the end which can be used as a comparison metric. Handily, it also ranks the currently tested device against others already in its database. Here’s how the Xiaomi Mi 4 stacked up. 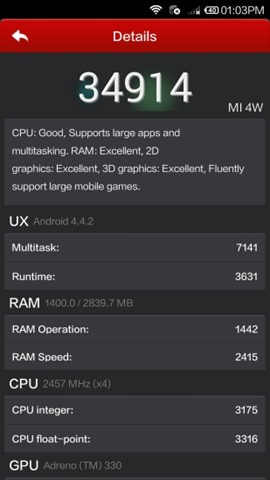 The Mi 4 scores 34,914 in AnTuTu, which puts it in the league of super-premium flagships such as the HTC One M8 (review) and the Samsung Galaxy S5 (review).

Yet another popular benchmarking too, Vellamo’s mainstay is its prowess at testing the CPU performance, among other things. The Metal chapter of the benchmark evaluates the pure number-crunching abilities of the device under testing, covering integer and floating point operations, memory read/write and peak bandwidth. The Mi 4 rules this one… take a look. 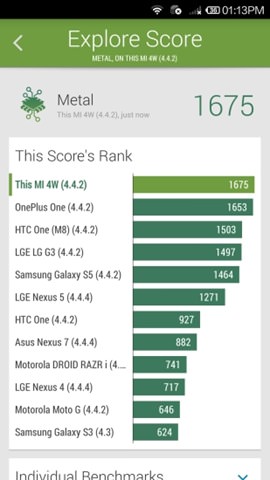 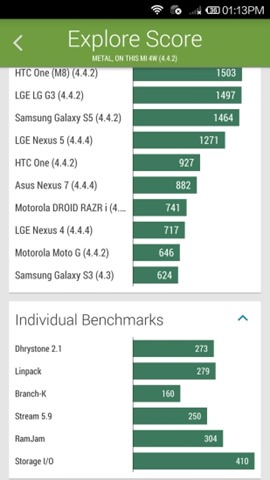 With an overall score of 1675, the Mi 4 manages to trump everything else in the chart, including the likes of the OnePlus One and the HTC One (M8).

Vellamo also includes a new Multicore chapter that tests the synergy between multiple CPU cores, quite apt for mobile devices these days that all come with two to eight cores. Here’s a look at the Mi 4’s prowess in this test. 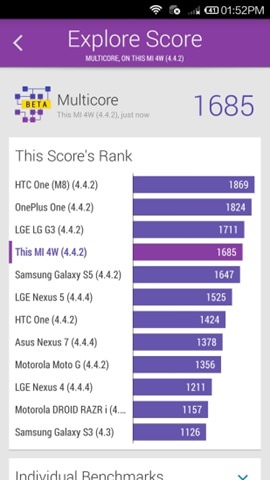 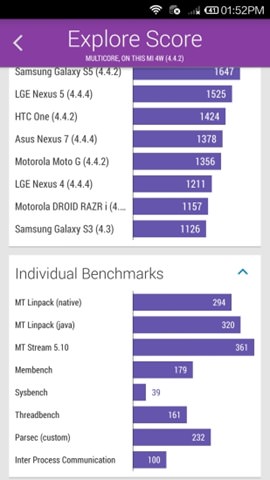 The Mi 4 doesn’t shine as brightly when it comes to multicore performance, but is still placed pretty high on the list.

Designed to test out processor performance by simulating real-world scenarios, Geekbench works across multiple platforms and is multicore-aware, meaning it can evaluate the performance of multiple cores of a processor. The benchmarking tool also features stress tests to determine device stability. Let’s see how the Mi 4 handles this one. 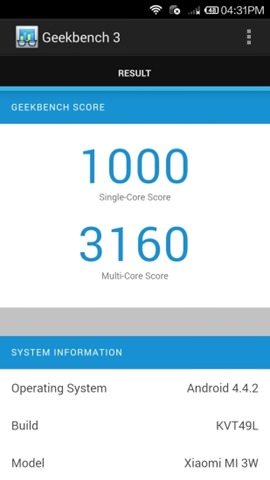 While the benchmark incorrectly detected our device as a Mi 3, it picked up the specs accurately and generated a score of 1,000 for single-core and 3,160 for multi-core performance. In comparison, the HTC One (M8) scores about 996 and 2,757 respectively, while the Sony Xperia Z2 (review) scores 942 and 2,556. The Mi 4 manages to beat both these stalwarts comprehensively.

The ability to render graphics is a key aspect of any mobile device, affecting things like gaming, among other things. GFXBench does exactly that, running a series of intensive tests to figure out how the device being tested stacks up. We ran this cross-platform  benchmark on the Xiaomi Mi 4 too, and the report card is right here. 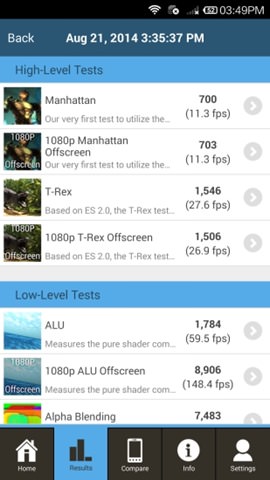 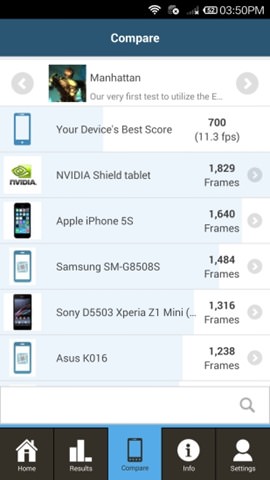 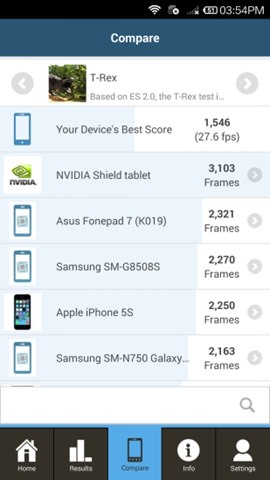 Taking into account the Manhattan and T-Rex values, both of which are high-level graphics tests available as part of the suit, the Mi 4 fares very well. Just for the sake of comparison, the Mi 4 scores 700 in Manhattan, as against the Sony Xperia Z2 that scores in the region of 770. In the T-Rex test, the Mi 4 racks up a score of 1,546, just marginally lower than the Xperia Z2 that scores 1,622, as per the GFXBench database.

While we don’t really use benchmarking alone to gauge the true performance of a device and feel that real-world usage matters more, the above scores are a good indication of the Mi 4’s capabilities. Our full review will separate the wheat from the chaff anyway, so keep your eyes peeled.

Qualcomm Snapdragon 865 benchmarks: a look at how powerful 2020 Android flagships can be expected to be