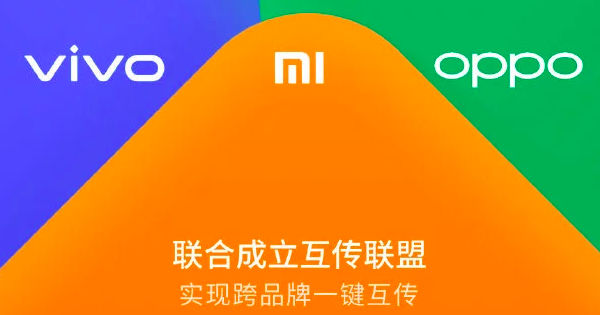 “The cross-brand file transfer feature will be capable of transferring files at up to 20Mbps without any third-party app from Xiaomi, OPPO, and Vivo smartphones”

Xiaomi, OPPO, and Vivo, fiercest arch-rivals of the modern smartphones era, have come together for a cross-brand file transfer platform. The OEMs have announced that they are together working on a feature that’ll allow users to seamlessly transfer files from the smartphones at up to 20Mbps without any third-party app. It’ll be similar to Apple’s AirDrop feature that allows file sharing among supported Macintosh computers and iOS devices over Wi-Fi and Bluetooth. However, unlike AirDrop, the cross-brand file transfer will not be limited to an ecosystem. It’ll enable one-click file transfer between smartphones from Xiaomi, OPPO, and Vivo.

The cross-brand file transfer is said to support multiple file formats such as photos, videos, songs, documents, and much more. It’ll offer a stable and power-efficient connection and transfer speed of up to 20Mbps. The move is likely to benefit the majority of customers as all the three phone makers have a substantial base. Xiaomi, OPPO, and Vivo have a market share of almost 50 percent combined in China, and they’re growing at a similar pace in India and other markets as well.

There is no exact launch date yet, but the cross-brand file transfer feature is expected to go into public beta by the end of this month. While the feature sounds interesting, it’ll be tough to implement as each OEM uses its flavour of Android on its smartphones. Xiaomi has its devices running MIUI skin atop the Android version whereas the BBK-owned Vivo and OPPO uses FunTouchOS and ColorOS UIs respectively.