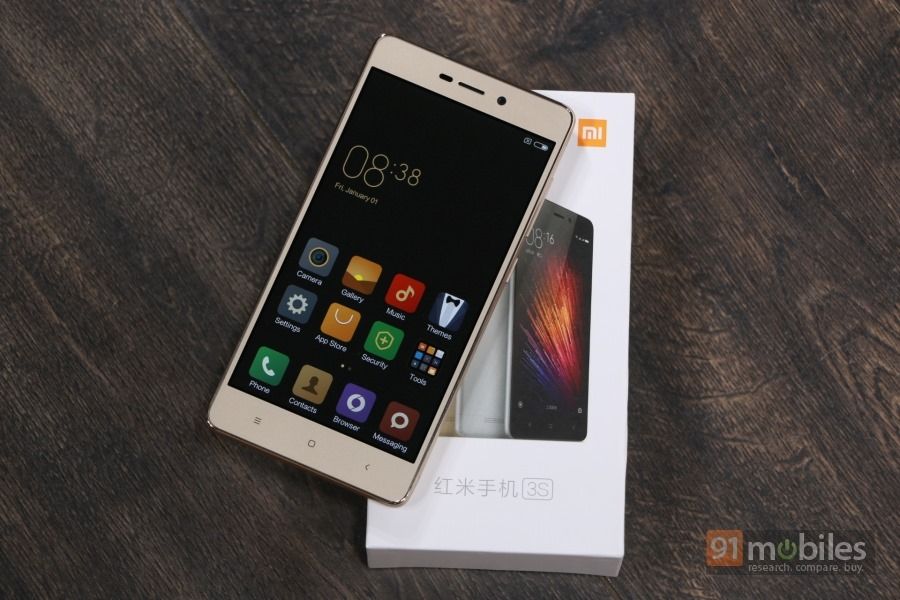 It’s been a while since Xiaomi launched a new model in the budget smartphone segment in India, and the Redmi 3s looks like a prime contender. While the recently-launched Redmi Pro has been hogging the headlines lately, it could be a while before it reached our shores, and when it does, its pricing in China indicates it won’t fall into the budget space. The Redmi 3s however, could be ideal for heating up the market in the sub-Rs 8,000 price category. We managed to acquire the base variant of the Redmi 3s from China, where it was launched just last month, and here are our first impressions. 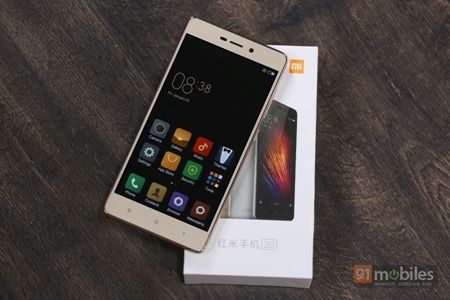 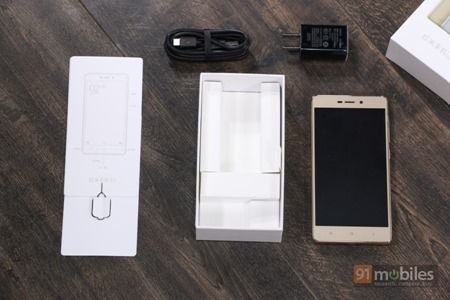 The Chinese retail box of the Redmi 3s looks pretty standard in terms of contents, containing the usual wall charger and USB cable, apart from the documentation. As usual, don’t expect a wired headset. 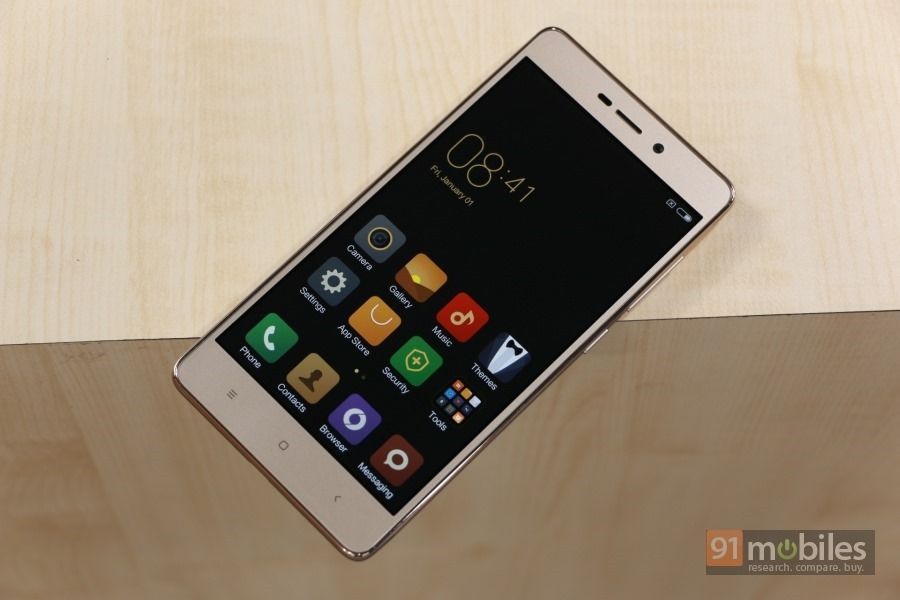 Coming to the phone, it’s pretty compact owing to its 5-inch display, and at first glance, looks like a shrunken version of the Redmi Note 3 (review). Encased in a curvy metal body, the phone feels quite premium, defying its budget pricing (699 RMB or ~ Rs 7,000). We have a gold unit, which looks quite stylish, and a slim, glossy strip that runs around the edges at the front adds to the classy looks. The phone is also available in silver and dark grey options. 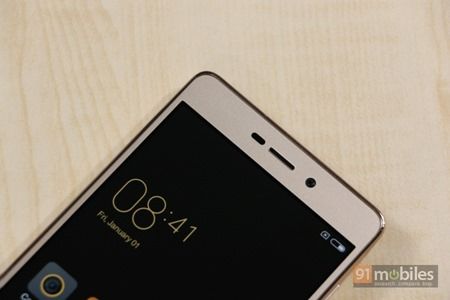 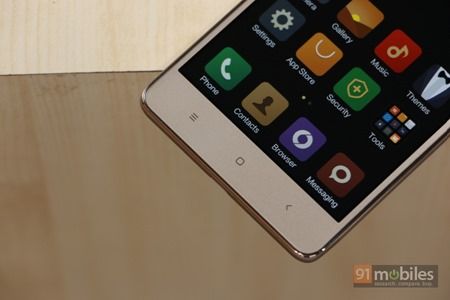 The 5-inch HD screen looks quite sharp, and on the fascia, you’ll see the usual elements such as the earpiece, sensors and front camera on top, and a row of capacitive navigation keys at the bottom. The navigation keys aren’t backlit, which is a bummer. 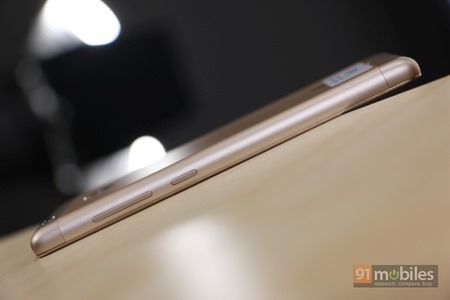 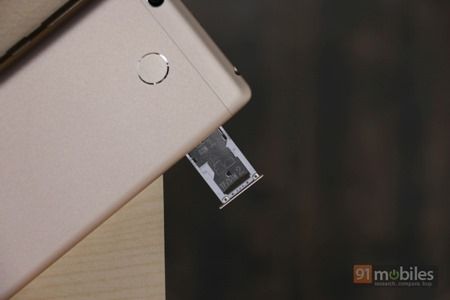 On the left, you’ll find an ejectable tray that gobbles up a pair of SIMs – a micro and a nano. The secondary slot can also accept a microSD card in  place of a nano-SIM to expand storage, since the Redmi 3s is a hybrid dual-SIM device. The volume rocker and power key are on the right. 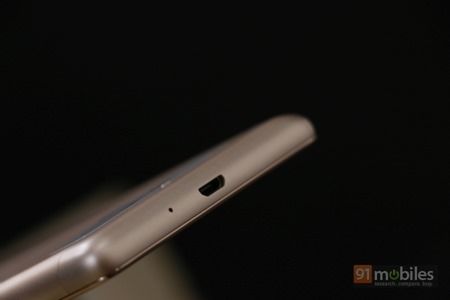 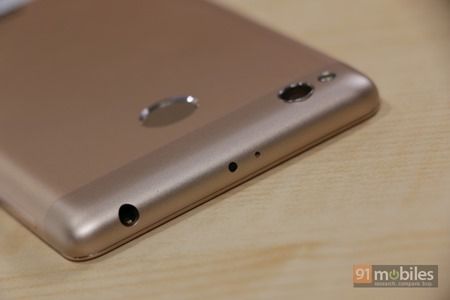 The bottom of the phone is home to a micro-USB port, while the top is where you’ll see a headphone socket along with an infrared blaster. Seems the latter is becoming a standard feature in most Xiaomi phones, so don’t be surprised to see random people switching channels on TVs located at places like airports and restaurants at will. 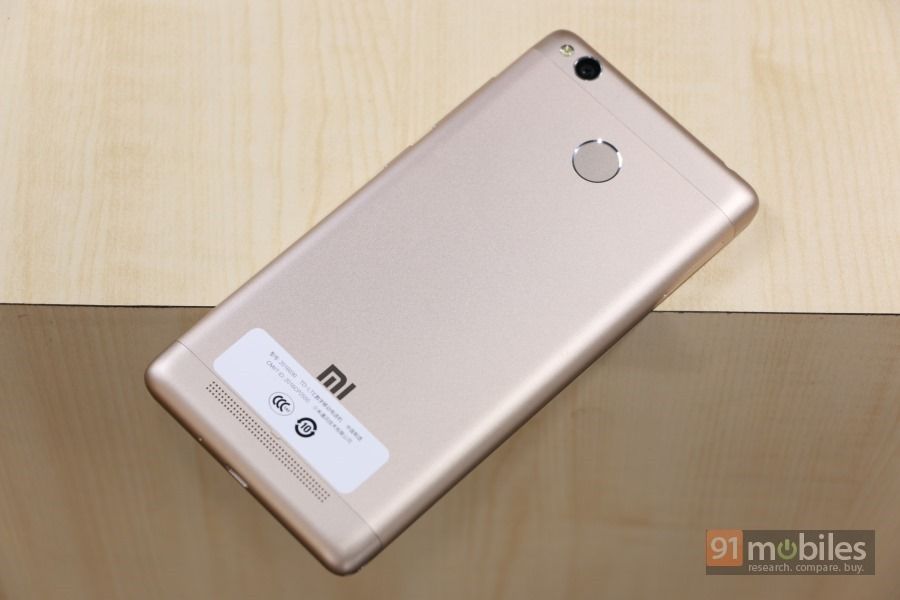 Switching to the rear, the back panel is almost entirely crafted out of metal, save for the two plastic caps on the top and bottom. At the rear, you’ll find the primary shooter along with an LED flash at top left. A circular fingerprint scanner can also be seen, along with Mi branding. The speaker grille is located close to the bottom. The placement of the speaker is less than ideal, since just like the Redmi Note 3, the sound could get muffled when the phone is lying on its back. As usual, a tiny protrusion has been placed next to the speaker to prevent the sound from getting muffled, and while that does work to some extent when the phone is kept atop hard surfaces like tables, it doesn’t really do the trick on softer surfaces like your bed, for example. Inside ticks an octa-core Snapdragon 430 processor, which is mated to 2 gigs of RAM. Almost 9GB was available out of the 16GB internal memory on first boot. You should note that ours is a Chinese unit so the platform build and the preloaded apps aren’t the same as what we’d find on a Xiaomi phone which is officially available in India. Therefore, if this phone ever comes to India, the available storage could a tad different. Notably, the Redmi 3s also comes in another variant which offers 3GB RAM and 32GB storage, and it remains to be seen if Xiaomi will launch both variants in India or just one – if this phone ever reaches our shores that is. In our brief usage, we didn’t encounter any lags or freezes, which means the Redmi 3s should work out to be a very capable budget phone. Of course, a more extensive review will show how well it works as a daily driver. 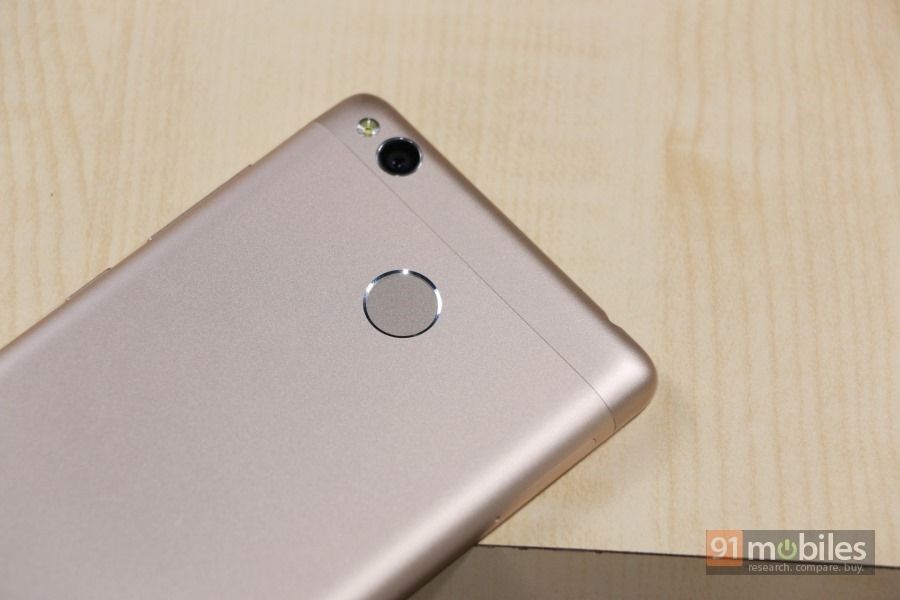 For shooting, you get a 13MP primary camera, while selfies are taken care of by a 5-meg sensor at front. The camera app offers expected modes like manual, beautify, handheld twilight and a bunch of scene presets, covering the likes of landscape, sports and night. The phone is capable of recording video at full HD resolution, and even offers a time-lapse mode. Again, an in-depth camera review is in the pipeline as you read this, and that would reveal if it’s a capable shooter. A couple of test we took indicate fast focussing speeds and pretty decent image quality. In terms of software, you get Xiaomi’s MIUI 7, which uses Android Marshmallow as base. We don’t have Google’s suit of apps and Play services on our unit, but all of those should be present on Indian units once the Redmi 3s gets launched here. Otherwise, the set of preloaded apps looks pretty standard, and also includes a few China-specific apps on our unit. All the usual MIUI features we know and love are present, including a Lite mode, the Security suite (that integrates a cleaner, blocker, battery manager, data monitor, virus scanner and a permissions manager), and the extensive support for themes. 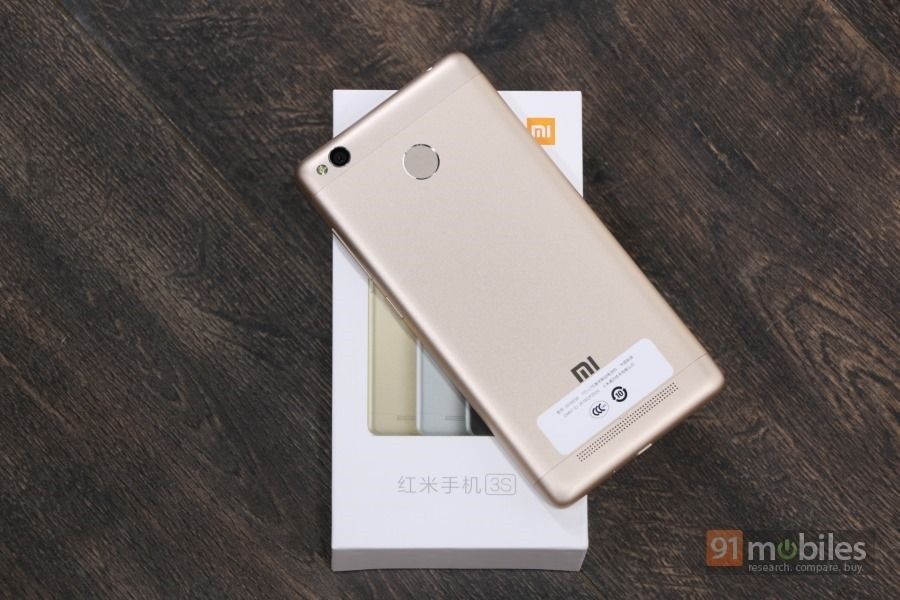 In recent times, most of the action in the VFM smartphone space has moved to the Rs 10,000 to Rs 13,000 price band, which is where the likes of Xiaomi’s own Redmi Note 3, LeEco Le 2, Lenovo ZUK Z1 (review) and Honor 5C (review) currently play. In the Rs 6,000-Rs 8,000 category, the Coolpad Note 3 Lite (first impressions) rules, with likes of the Swipe Elite Plus also being notable options. In such a scenario, the Redmi 3s is bound to garner massive interest, with its base variant coming in at around the Rs 7,000 mark. Each of those rivals we mentioned have their own pluses – the Coolpad Note 3 Lite boasts 3GB RAM, while the Swipe Elite Plus rocks a full HD display and a Snapdragon 615 processor. However, the Redmi 3s seems like an all-rounder, with a solid blend of compelling factors like a metal body, fingerprint scanner, decent cameras and promise of smooth performance. That said, if there’s one area where the Redmi 3s will blow everyone else out of the water, it has to be its beefy battery. The Xiaomi Redmi 3s packs in a 4,100mAh sealed battery, which should keep its proud owner away from a power source for long periods of time – and that’s really the big feather in its cap. Now all we can do is hope Xiaomi brings it to India soon. Photos by Raj Rout
ShareTweetShare