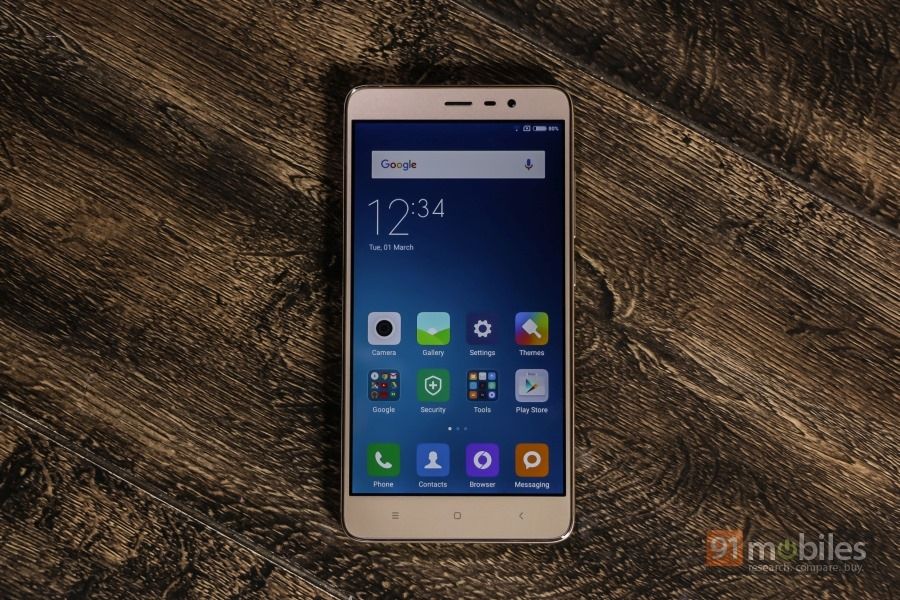 “All you wanted to know about the new blockbuster from Xiaomi”

Xiaomi is the brand that pioneered the concept of flash sales in India, and has been quite popular among smartphone buyers in the country. That’s mainly due to the fact that most of its phones offer great value for money, and defy the usual price vs specs ratio. In the recent few months, its thunder has been stolen by a few other brands, and while it has had a few new offerings, there hasn’t been a lot of buzz around them. That looks set to change with the new Redmi Note 3 however, and in a big way. 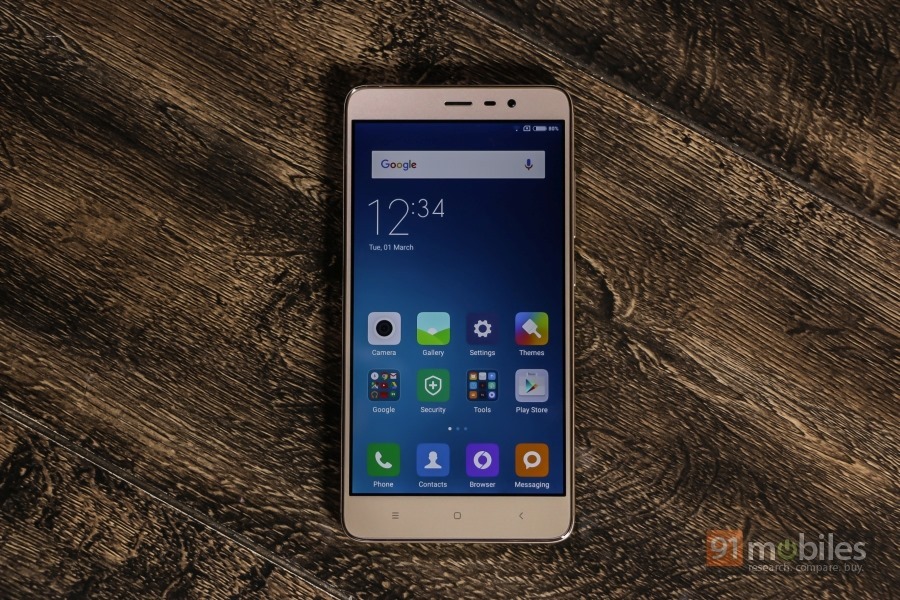 The Redmi Note 3 (first impressions) is a phone that promises to be yet another chartbuster from Xiaomi, but it isn’t as if it brings anything special with it in terms of capabilities or features. It does however, seem to be a solid all-rounder and one that doesn’t break the bank – which is exactly what most of us are looking for in a daily driver anyway. We’re here to clear all the cobwebs you may have in your minds regarding the new phone, so here goes…

Can you start with the specs?

Absolutely. Xiaomi launched the Redmi Note 3 in China with a MediaTek Helio X10 processor, and later introduced a Pro version powered by Snapdragon 650. The latter is the one making its way to us, but the brand seems to have ditched the Pro in the moniker, and is calling it simply the Redmi Note 3. So the phone you’d be able to buy officially in India sports a 5.5-inch full HD LCD display (~403 ppi), with a hexa-core Snapdragon 650 chip ticking inside. Graphics are handled by an Adreno 510 GPU. There’s 2GB or 3GB of RAM depending upon the variant you buy. The one with 2GB of RAM comes with 16GB storage, while the other offers 32 gigs. Measuring 150 x 76 x 8.7mm, the Redmi Note 3 tips the scales at 164 grams, and for shooting shenanigans, offers a 16-megapixel primary camera with phase detection autofocus and a dual-tone flash. The front shooter has a 5MP sensor. One of the mainstays of the smartphone is its powerful battery, and with its 4,000mAh rating (4,050mAh to be precise), promises solid battery life.

Can you throw more light on the design?

Of course. The phone comes clad in metal, and is actually the first all-metal smartphone from Xiaomi. The colours available include silver, grey and champagne gold. The unibody phone feels quite compact considering its 5.5-inch screen size and boasts a high screen-to-body ratio. 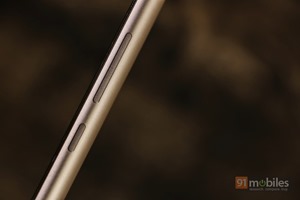 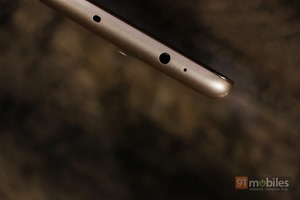 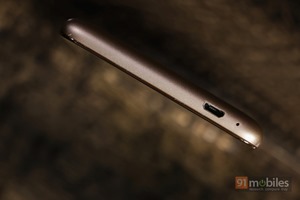 Below the screen, you’ll find the usual row of backlit capacitive navigation keys, with the earpiece, sensors, front camera and a notification LED on top. On the left is an ejectable SIM tray, while the volume rocker and power key are placed towards the right. On top, you’ll find the headset socket and an IR blaster, while the bottom is home to a micro-USB port. 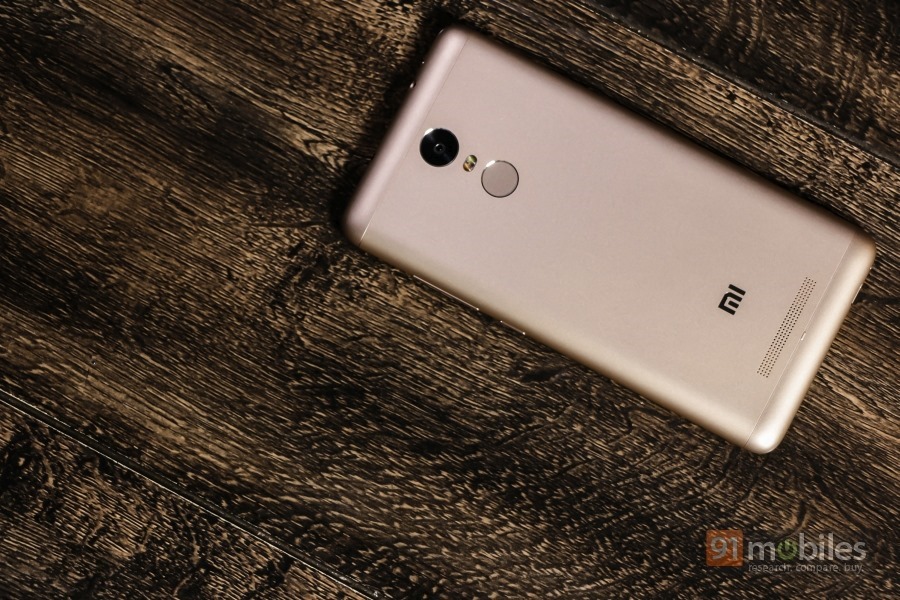 At the rear, you’ll see the circular lens for the primary shooter, the dual-tone flash, a round fingerprint scanner, and if you shift your gaze lower, a Mi logo and a speaker grille. All these elements are placed vertically, dead in the centre. There’s also a tiny bit of metal that juts out of the body right below the speaker grille, and this is meant to keep the audio from the speaker from getting muffled when the phone’s lying on its back atop a flat surface. The handset looks pretty good and feels solidly built, but on the flipside, the smooth metal body and rounded edges mean its prone to slippage.

Is there a layer of Gorilla Glass on the Redmi Note 3’s display?

The Redmi Note 3 does have a protective layer atop the screen, but we can’t confirm at the moment whether it’s Gorilla Glass. We’ll update this as soon as we have more clarity.

What SIM card(s) does the Redmi Note 3 accept? 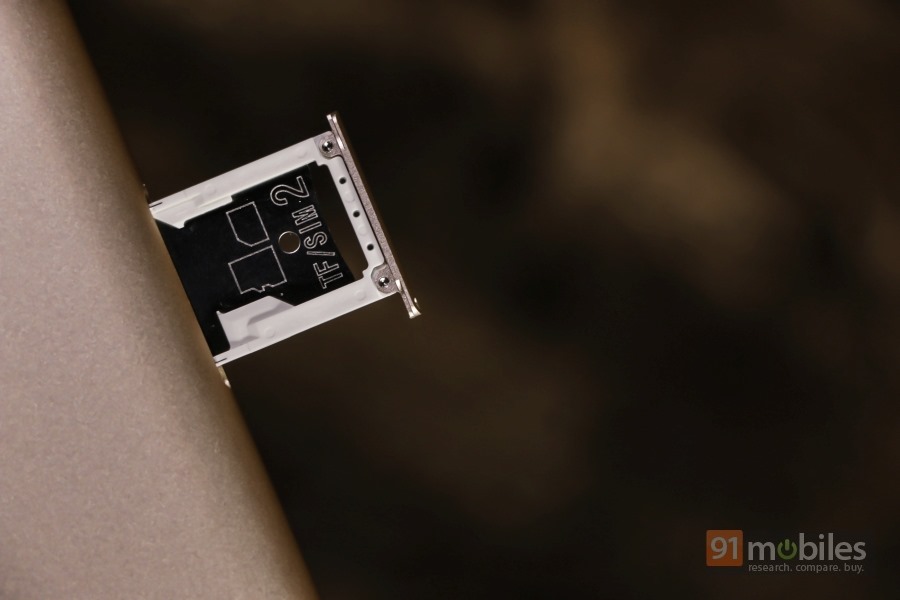 The Redmi Note 3 is a hybrid dual-SIM device, and accepts a micro-SIM in the primary slot. The secondary slot can take either a nano-SIM or a microSD card.

Is there support for 4G? What about the other connectivity options?

Yup, 4G is supported. In fact, the Redmi Note 3 also features VoLTE, and the bands supported include support for Band 5, which promises to improve indoor coverage. The other connectivity options include dual-band Wi-Fi (including 802.11ac), Wi-Fi Direct, Bluetooth, A-GPS and wireless display mirroring.

How much storage does the Redmi Note 3 offer? Can I add more? 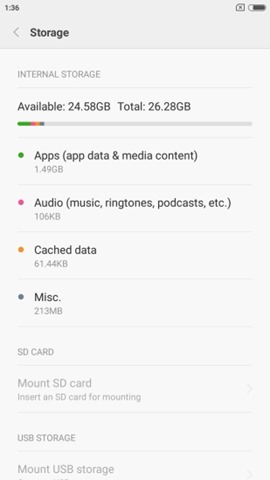 Our 32GB review unit had about 24.5GB free on first boot, though this could change slightly depending upon the preloaded apps the retail units come with. The secondary SIM slot (which doubles up as a memory expansion slot) can accept microSD cards up to 128GB in capacity.

You bet. You can connect flash drives and other supported peripherals via USB OTG directly to the phone if you wish.

Alas, NFC isn’t there… something to keep in mind in case you’re looking specifically for this feature.

What about available sensors?

The list of available sensors include fingerprint, accelerometer, gyro, proximity and compass.

What can you tell me about the camera?

Lots actually, though you should probably check out our camera review for the full lowdown. The camera app is quite clean, and apart from letting you switch between photo and video modes and allowing you to jump to the gallery, also offers control over the flash, a toggle for the front camera and an option to toggle HDR as well. 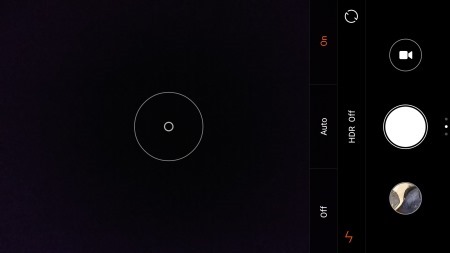 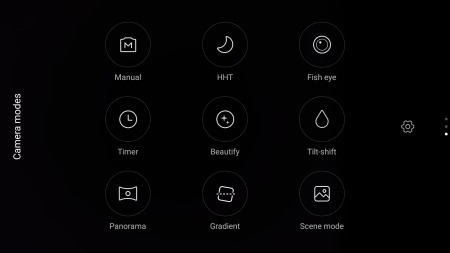 You can also switch between the front and rear cameras by swiping up or down on the viewfinder. A tap on the viewfinder throws up an exposure ring, and you can tap in its centre to shoot. Swiping from right to left throws a bunch of colour filters with real-time previews, while swiping in the opposite direction displays the available shooting modes. These include panorama, handheld twilight, beautify, timer, manual (lets you tweak white balance and ISO), and fish eye, along with a scene mode option that includes presets like sports, night, snow, sunset, beach and fireworks. There’s a gradient mode that crops the captured image the right way even if you shoot with the phone tilted in your hand, plus a tilt-shift mode that keeps the middle part of the image in focus and blurs the rest. Thanks to PDAF, the 16-meg primary shooter focusses quite fast, and can shoot lovely pics, especially in daylight. The low-light shots turn out pretty decent too.

Got any details about the software platform and features?

Sure. The Redmi Note 3 runs MIUI v7, the same platform we’ve seen earlier on Xiaomi’s phones. At the base, MIUI utilises Android Lollipop 5.1.1. Overall, you won’t find the interface or features any different when you compare this with other phones running MIUI 7, but we’ll give you a quick overview. 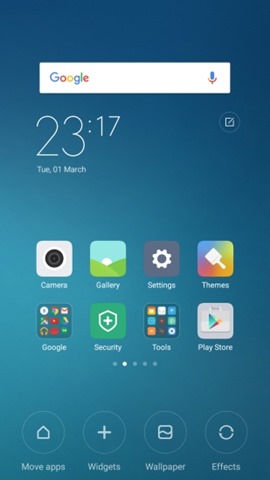 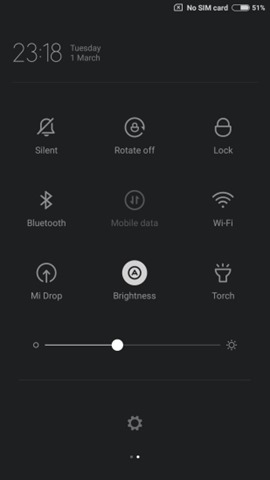 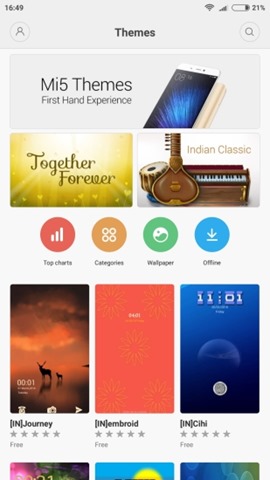 There’s no dedicated app drawer, but you get extensive theme support, along with a feature-rich Security Center that includes a cleaner, a data monitor, a blocklist, a battery manager, a virus scanner and a permissions manager. The text size can be tweaked as per your preferences, and you can also tweak the display in terms of colours and contrast. There’s a special reading mode available as well, and this adjusts the display to make it easy on the eyes if you like browsing or reading news at night. The Lite mode we saw earlier on Redmi phones earlier is there too, letting you boot into a simplified user interface that uses large tiles and fonts to make the phone easier to use for newbies and the elderly. 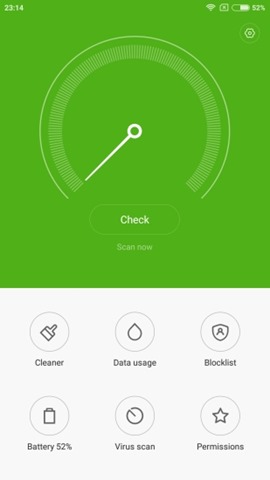 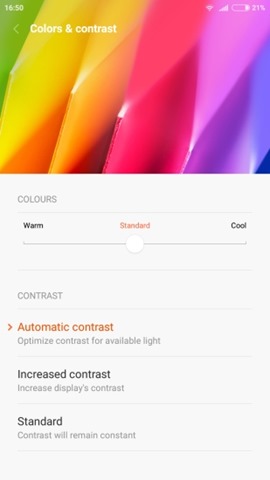 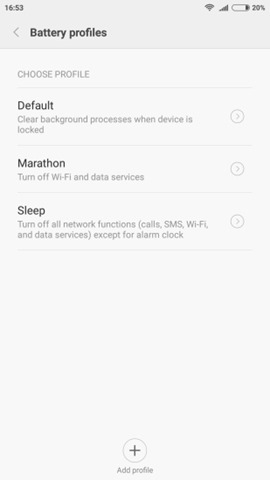 The other available features include a built-in call recorder, a child mode, a private area for personal content in the file manager, a private area for SMSes, and a daily lockscreen that updates lockscreen wallpapers automatically. For prolonging battery life, you get customisable profiles and you can set them to be activated based on remaining battery levels or time of day. MIUI saves battery power in the background by default by restricting background access to location and the network, but you can turn this off or set it to restrict all background activity. This can even be set on a per-app level. Another feature we discovered while capturing screenshots for this article is that the device automatically renames the image files as per the app the screenshots come from. So if you capture a screenshot of the home screen, the file will be named something like “Screenshot_2016-03-01-23-17-49_com.miui.home.png”. Pretty handy, especially for us reviewers.

Can the fingerprint scanner be used for anything else apart from just unlocking the phone? 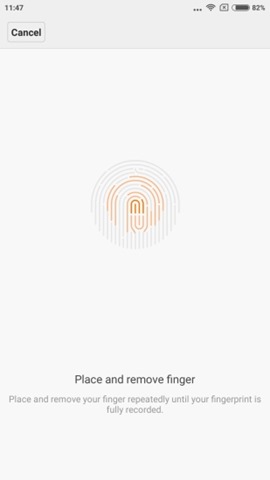 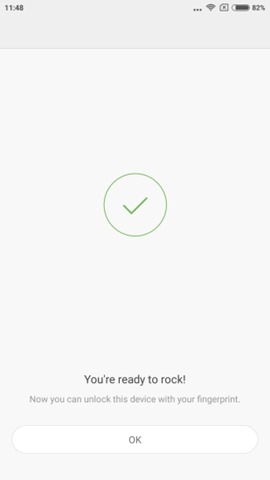 Apart from unlocking the phone, the fingerprint scanner can also be used to exit child mode and to access the private area in the default file manager. It can be used to access App Lock and Hidden Folder on MIUI, and also functions as a shutter button for both the front and rear cameras. You can register up to five fingerprints, and the setup process is simple and straightforward.

What’s included in the retail box? The box doesn’t have anything worth speaking about – Xiaomi doesn’t even include earphones. So you just get a wall charger and a USB to micro-USB cable, apart from some documentation and a SIM eject tool.

So how much do I need to shell out to call myself a proud owner of a Xiaomi Redmi Note 3? Where can I buy one?

As usual, Xiaomi will be selling the Redmi Note 3 online via flash sales, and you should be able to buy it on Amazon and Mi.com starting March 9th. The 2GB RAM/16GB storage variant of the Redmi Note 3 will set you back by Rs 9,999, while the higher end model with 3GB RAM and 32 gig storage can be yours for Rs 11,999.