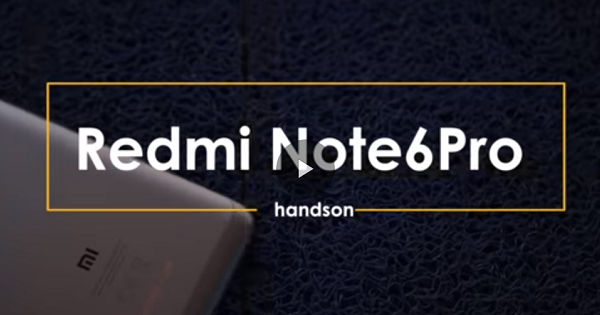 We just recently reported a leaked image of a Xiaomi Redmi Note 6 Pro with its protective film that disclosed a lot about the phone. Well, that’s nothing compared to what you’re about to see, as a YouTuber seems to have gotten hold of an actual Redmi Note 6 Pro unit and claims to reveal all the details.

The video gives an overview of the design of the handset, which is more or less the same as the Note 5 Pro except for the front. The front of the Note 6 Pro bears a notch on the top and has the same thick chin on the bottom of the device. Everything else is exactly the same.

As for specifications, the Redmi Note 6 Pro is likely to sport a 6.26-inch full HD+ display with a 19:9 aspect ratio. One of the few changes you’ll see on the Note 6 Pro is the front camera setup, which will probably include dual snappers. It’s a 20MP + 2MP setup, while the rear comes with no changes from last year’s twin cameras on the Note 5 Pro. There’s a 4,000mAh battery inside, which is also not much of a surprise and the processor also seems to be the same as its predecessor — the Snapdragon 636 SoC.

The leaked video seems legit, and the device showcases was a fully working unit that had MIUI.

Recently, famous tipster Roland Quandt tweeted that the Redmi Note 6 Pro could come in 3GB RAM + 32GB storage and 4GB RAM + 64GB variants. We could see different colour options such as gold, blue or black and a price between 200-250 Euros. There’s still no official word or even a teaser for the launch of the Redmi Note 6 Pro by Xiaomi. The brand is expected to launch the Mi Max 3 in India in the coming weeks.