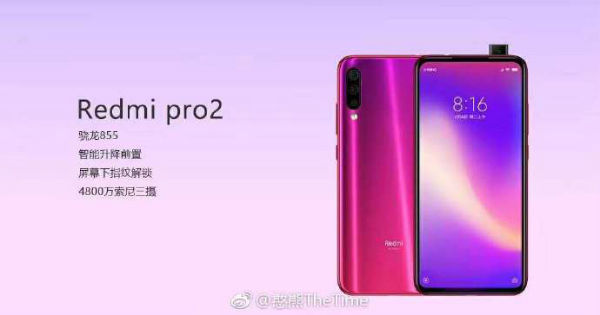 “The Redmi Pro 2 is said to be a flagship offering with a 6.39-inch FHD+ display and a 48MP primary rear camera”

Xiaomi’s sub-brand Redmi recently confirmed that its new smartphone will be called the Redmi K20. The phone is expected to be unveiled at an event in the brand’s home market of China today. Meanwhile, specs of yet another Redmi phone, allegedly called the Redmi Pro 2, have hit the interwebs. In addition, a render of the device has also been leaked, revealing its design alongside the specs sheet. 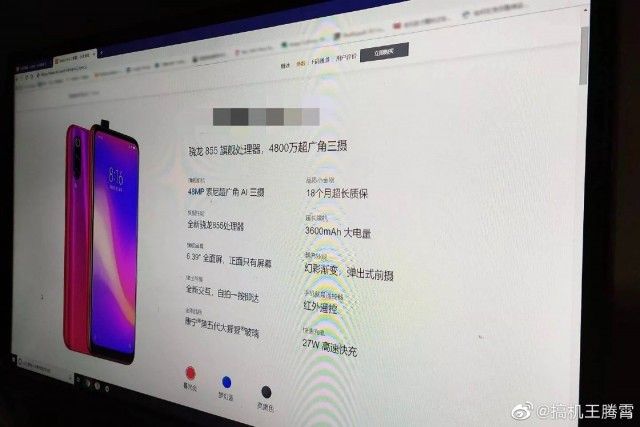 An image posted by a tipster on the Chinese social networking website Weibo shows that the Redmi Pro 2 will have a design similar to the Redmi Note 7. However, the former will be featuring an all-screen fascia, sans any notch, thanks to a pop-up selfie camera module. From the photo, it looks like the handset has slim bezels on the side but its bottom chin is a tad large. At the rear, a triple camera module is also visible, which is placed vertically alongside an LED flash unit.

Coming to the specs, the leak suggests that the Redmi Pro 2 will feature a 6.39-inch full-HD+ display with a layer of Corning’s Gorilla Glass 5 on top. The fingerprint sensor of the handset will be placed under the screen itself. Powering the phone will be Qualcomm’s latest top-notch flagship Snapdragon 855 processor. For imaging, the handset is said to flaunt a 48-megapixel AI-powered primary shooter at the rear, but there’s no word regarding its other two sensors at the moment. For selfies, the upcoming Redmi offering will sport a 20-megapixel camera.

Furthermore, the leaked specs sheet suggests that the Redmi Pro 2 could be fuelled by a 3,600mAh battery that will support 27W fast charging. The smartphone is said to come with an IR blaster, which can be found on most of the Redmi series phones. Lastly, the leak indicates that the handset will be available in three hues – black, red, and blue.

Unfortunately, there’s no word regarding the launch date of the Redmi Pro 2 at the moment. Notably, there’s a possibility that this leaked specs sheet is of the Redmi K20 that’s launching today, and the Redmi Pro 2 model doesn’t exist at all. However, as it goes with all leaks, we will have to wait for the company’s official announcement for any confirmation.