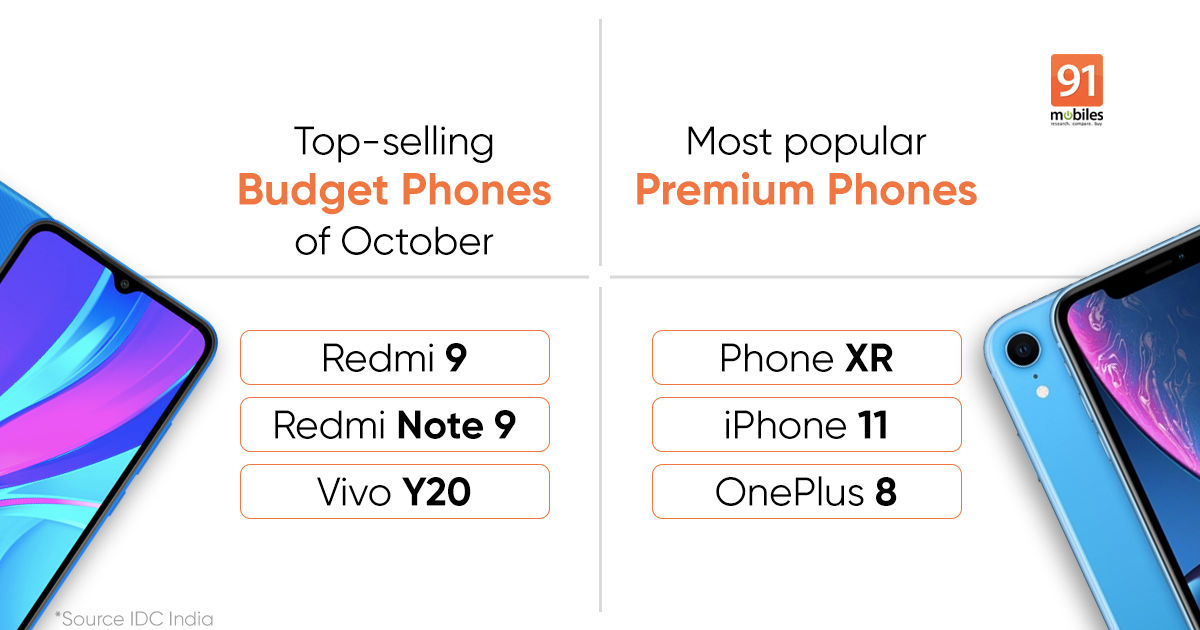 Xiaomi has retained the top spot in the Indian smartphone market in October, according to the latest data from IDC. The data shows the company has shipped a total of 5.5 million units in the month, compared to 3.9 million units during the same month last year. It has secured a 24.8 percent market share and witnessed a growth of 38.1 percent YoY. Samsung is in second place with a 20.6 percent market share despite strong growth of 42.2 percent and has shipped 4.5 million units. The overall Indian smartphone shipments grew by 42 percent YoY in October, with a total of 21 million units shipped.

According to IDC, Vivo is at the third spot with 3.9 million units in October, compared to 2.9 million from 2019. Realme is in fourth place as it could ship 3.0 million units, which registered a 48.2 percent growth in October and is also the highest among all the brands. OPPO came in fifth position with 2.7 million units, a YoY growth of 40.2 percent. Other brands accounted for 2.4 million units. IDC says the growth in India was due to the increase in online sales and high demand in the third quarter of this year. Notably, the units shipped in India happens to the highest-ever for October month and second-highest for a single month after 23 million units in September this year.

IDC says the growth in India was due to the increase in online sales and high demand in the third quarter of the year.

The report further says phone purchases between Rs 8000 to Rs 16,000 grew by 60 percent YoY. Redmi 9, Redmi Note 9, and Vivo Y20 were the top-selling models in the segment. Apple led the premium segment (Rs 35,000 to Rs 50,000) in India, with a growth of 16 percent YoY in October. iPhone XR, iPhone 11, and OnePlus 8 were the most popular models in this segment, with sales driven by affordability schemes and offers.

5G smartphones was sales of 5,00,000 units in October, with 80 percent of the units purchased in the top 10 cities. IDC India Market Analyst Sachin Mehta in the report said “uncertainties on spectrum availability, clear use cases, and high prices” might limit the sales of 5G smartphones in a few big cities.

Cities such as New Delhi, Mumbai, Bengaluru, Chennai, and Kolkata accounted for as much as 25 percent of the sales, with e-learning driving demand in the bigger cities. Sales in Jaipur, Gurgaon, Chandigarh, Lucknow, Bhopal, and Coimbatore grew by 50 percent. However, other regions only saw an average of 25 percent increase in demand due to economic concerns and consumer spending focussing only on essentials. The top 50 cities were responsible for 55 percent of the national demand.

Online platforms were the major source of smartphones sale as they accounted for 50 percent of the total sales. This is a 23 percent YoY growth. Supply chain restrictions offline sales as a result of fewer walk-ins during the October month.