Samsung and Huawei (along with its subsidiary Honor) introduced punch-hole camera inside the screen back in December 2018. The design seems to be gaining traction, and we could see more OEMs launching their own version of punch-hole display smartphones in the future. Chinese phonemaker Xiaomi could be among them. As reported by LetsGoDigital, the company has allegedly been granted a patent for the handset that’ll have not just one but two holes on the display. 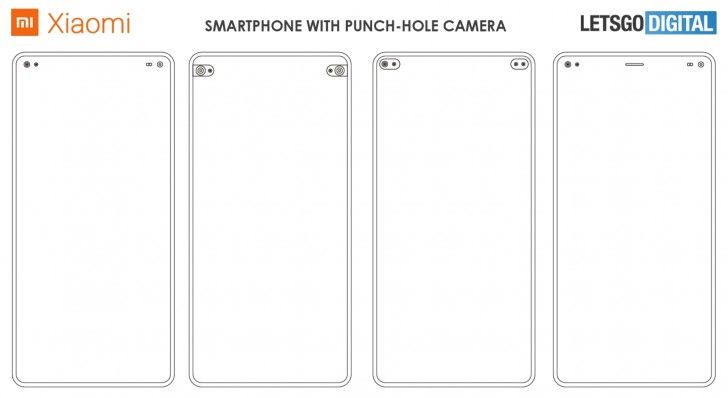 The patented image (above) reveals Xiaomi’s implementation is a bit different than what is expected on the upcoming Galaxy S10+. While Samsung’s handset will reportedly have a pill-shape cut-out at the top-right corner for dual selfie camera, the unknown Xiaomi seems to have two separates hole on either side of the display. It’s not clear, but the second hole is speculated for a secondary front camera or notifications light and proximity sensor.

Notably, this is just one of the 24 different designs Xiaomi had applied for. The vendor could also opt for either both cameras on one side, or one on the left and the other on the right, or two elliptical holes on opposite ends up top. We expect to know which route Xiaomi will take (design-wise) for its first punch-hole display smartphone along with its specifications in the coming days.

Meanwhile, Xiaomi recently teased its first foldable display smartphone. The handset will come running a custom MIUI skin atop the Android that’ll automatically adjust the content depending on the display aspect ratio you’re using. The exact launch date of the device is yet to be revealed, however, there’re speculations that Xiaomi could unveil it at an event in Barcelona later this month.