Zomato has quietly rolled out its online grocery delivery service, called Zomato Market, in India. The service from the Indian restaurant aggregator will focus on doorstep delivery of groceries. This will come as a boon during the lockdown in India that has increased the demand for online grocery services like Big Basket, Grofers, Amazon Pantry and so on. Zomato Market feature, which is now live on the Zomato app, and is displayed on the main page above the food deliver options. You will see a few grocery stores listed based on your location. The service is said to be live in only in Delhi, Kerala, and Punjab. 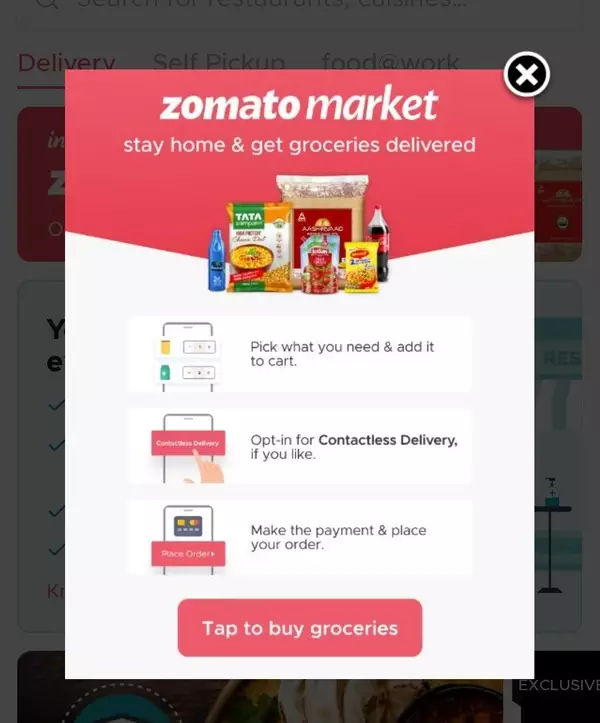 Zomato Market will let you opt-in for contactless delivery so that buyers can maintain social distancing while accepting orders from the rider. As per a report by Inc42, offline stores which work with Grofers will be listed on Zomato’s app. The launch of Zomato Market should ease some of the congestion being faced by Big Basket, Grofers, Amazon and Flipkart, who have been struggling in fulfilling orders.

Politician Shashi Tharoor was first to announce the launch of Zomato Market. In a tweet, Tharoor said that Zomato has partnered with SupplyCo. Operations to deliver groceries in Kochi, Trivandrum, Kottayam and Thrissur. In Delhi, the Zomato Market is said to be available in limited areas at the moment. Other than grocery delivery, Zomato’s food delivery service has been running ever since the lockdown was initiated. The aggregator says that the restaurant kitchens have been sanitised as per WHO advisory, and it has started contactless deliveries, daily temperature checks, and hand wash stations for riders.

Having said that, Zomato isn’t the first to foray into the grocery delivery market. Its arch-rival Swiggy is doing it for over a year. In fact, the hyperlocal delivery of Swiggy is said to be operating at a significant scale even when compared Swiggy’s food delivery volumes in the city. Bengaluru-based player Dunzo, meanwhile, has been delivering groceries online for four years now. It started as a personal task management platform in Bengaluru on WhatsApp and is now a full-fledged automated, app-based service running in four other cities – Gurugram, Hyderabad, Chennai, and Pune.