When Nokia announced a comeback into the smartphone market under the umbrella of HMD Global, I have to admit I was pretty stoked. The fact that the new Nokia smartphones would come equipped with Android made the deal even sweeter, and I couldn’t wait to see what the Finnish brand had in store. At MWC in February this year, I got the chance to spend a short time with Nokia’s Android lineup in the form of the Nokia 3 (first impressions), Nokia 5 (first impressions) and Nokia 6 (review). At the time, I was impressed by the solid build and use of stock Android on the devices. Fast forward to a few months later, and the Nokia smartphone range is now available in India. I’ve had the chance to use the Nokia 5 extensively over the last month, to really see how the device holds up when compared to the competition. Suffice to say, things aren’t what they seemed at the outset. Read on to find out if I think the Nokia 5 makes a worthy purchase.

The Nokia 5 has two main factors working in its favour – the pure interface with timely Android security and system updates, and the build quality which is one of the best in its price range. Unfortunately, areas like performance and cameras aren’t up to the mark when you consider the competition. If a Nokia smartphone is what you’ve set your heart on though, we suggest opting for the slightly more expensive Nokia 6.

Design and display: keeping it in the family 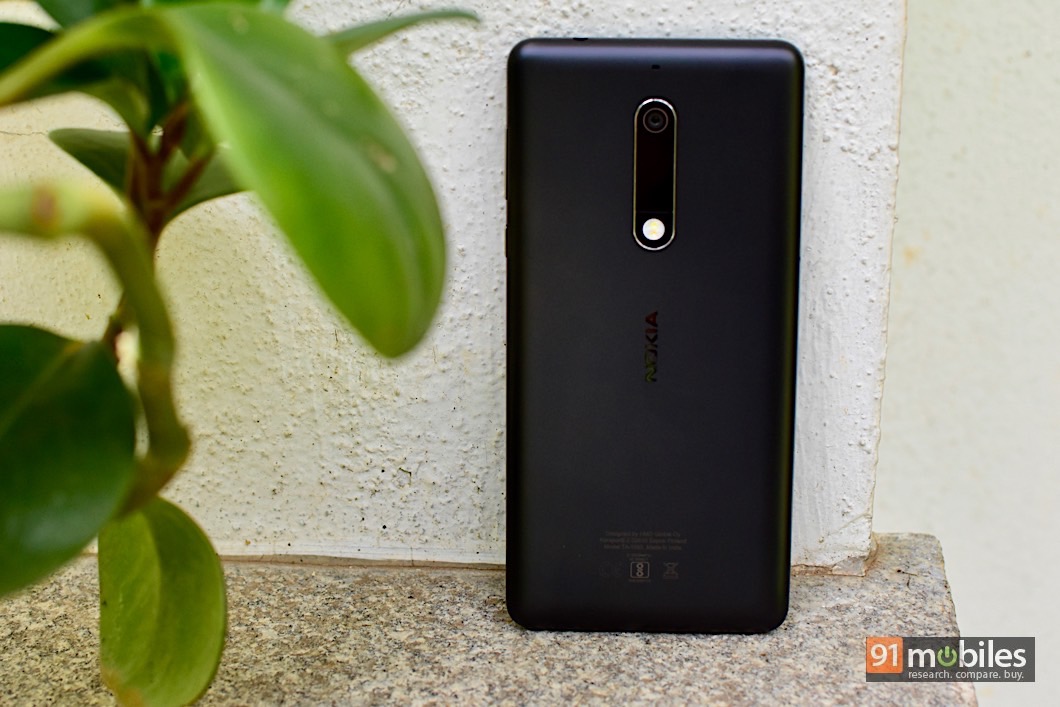 Nokia smartphones of yore have been commended for their sturdy design, and HMD Global has continued this philosophy with the Nokia Android lineup. The Nokia 5 is possibly one of the best constructed devices you’ll see in this price range, with an all metal unibody design, precisely drilled ports and well crafted buttons with good tactile feedback. That said, the design of the phone itself is nothing to write home about. The smartphone features prominent bezels all around the screen. Below the display you’ll find two capacitive backlit Android navigation keys, with a slim fingerprint sensor/ home button wedged in between. The fingerprint sensor works well for the most part, but ended up not recognising my fingerprint on more than one occasion. I also noticed a slight delay while unlocking the screen.

While the metal construction of the Nokia 5 is solid, the edges tend to get scratched fairly easily – after a few weeks of use the phone was quite scuffed along the sides, although the back panel remained free of marks. The rear is where you’ll find the trademark Nokia camera module, consisting of an oval shaped piece of glass that houses the camera lens and flash.

The Nokia 5 sports a 5.2-inch display with HD resolution and Gorilla Glass protection. The screen is sharp with vivid colours. Since the display is polarised, reflections aren’t a problem and sunlight legibility is decent too. I did find that the auto brightness tended to veer towards the brighter side though, and I often ended up having to tone it down manually. 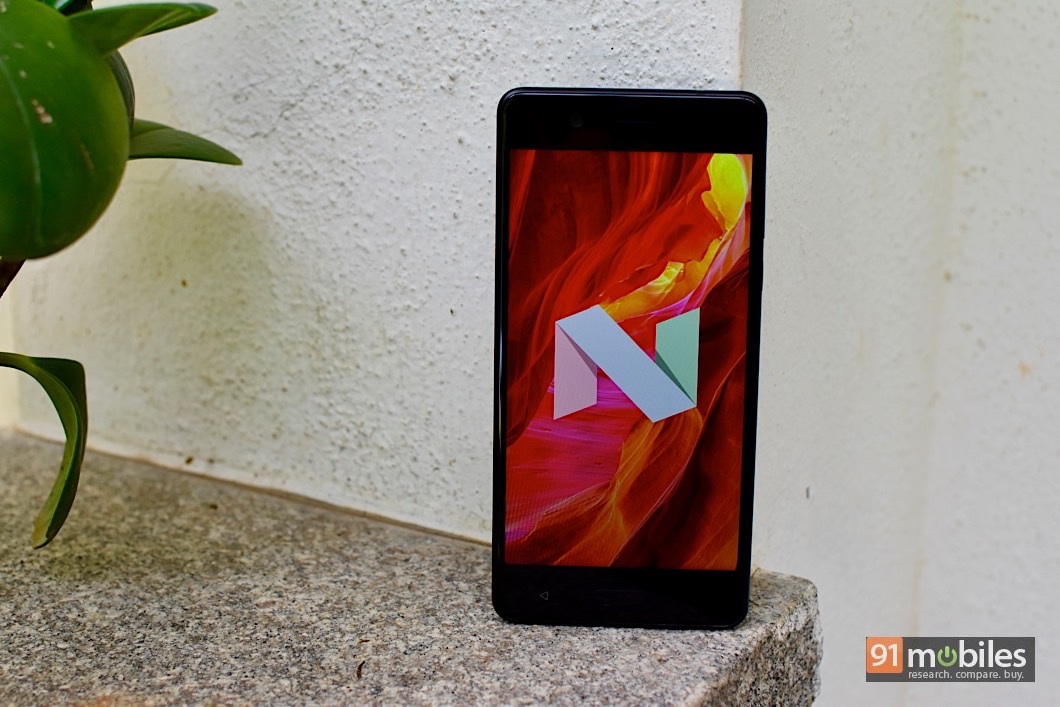 The stock Android software is one of the perks of the Nokia 5. Not only does it run Android 7.1.1, but you also get the monthly Android security patches bang on time ­– in some cases even before Google’s own Pixel smartphones. The benefit of stock Android is that the phone is entirely free of bloatware, although users who want some of the extras we’ve come to enjoy from custom ROMs like OxygenOS and MIUI might be left wanting for more. For example, basic stuff like displaying battery percentage isn’t enabled by default, and you’ll have to enable the System UI tuner (press and hold the settings icon in the drop down menu for 10 seconds) to get this feature.

I did notice an odd glitch on the Nokia 5’s software front though – my Gmail and calendar apps kept displaying unread notifications, even when there were none. The issue persisted even after clearing the cache for the individual apps, so this looks like a bug HMD Global will need to sort out. That said, it’s refreshing to see vanilla Android on a device at this price, and HMD Global’s commitment to updates means the Nokia 5 will be among the first mid-range devices to get the upgrade to Oreo.

Cameras: not the best in class 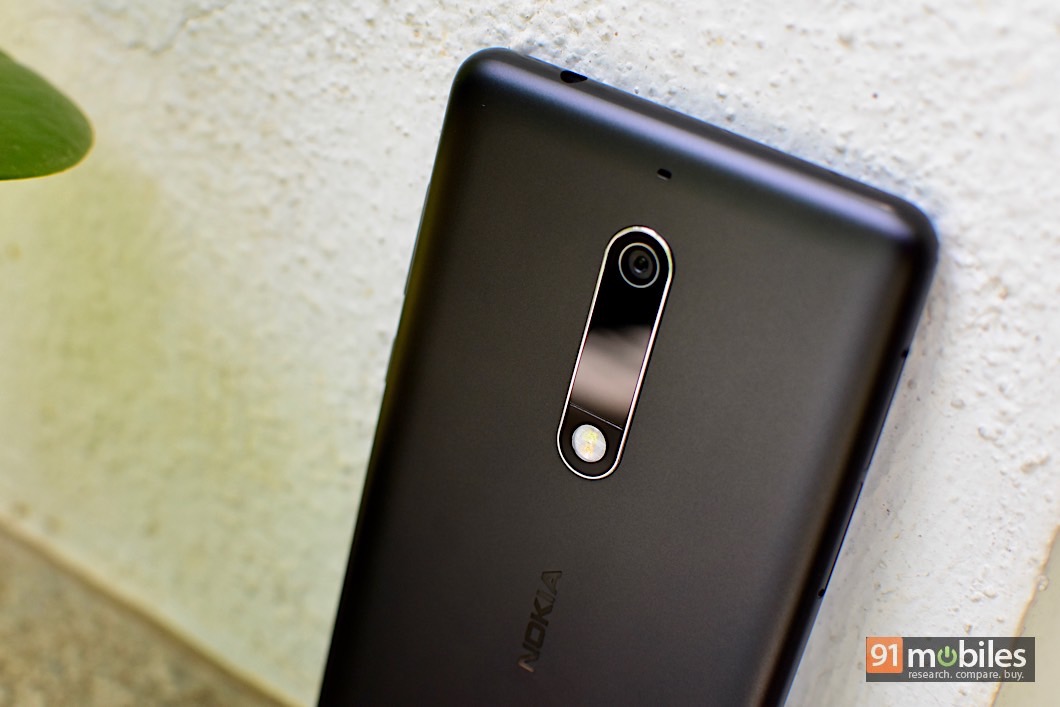 The Nokia 5 comes equipped with a 13MP rear camera with PDAF, f/2.0 aperture and a dual-LED flash. In the front, it gets an 8MP selfie camera, which surprisingly comes with autofocus – a rarity even on flagship cameras. The camera interface is a barebones affair without any bells and whistles. You get the basics like HDR, Panorama and Beautify, but not much else. In a way, this simplifies the shooting process, but some folks might prefer a richer experience. As far as the image quality goes, the Nokia 5 can take decent images in bright daylight, but indoors and in low-lighting, it struggles. I ended up with a lot of noisy images and blurred shots, so this isn’t a device I would consider if a good camera is one of your pre-requisites. Having autofocus on the front camera is a nice touch, but again, you get usable selfies only in bright lighting. Take a look at some of the image samples below to see what I mean.

Performance: gets the job done 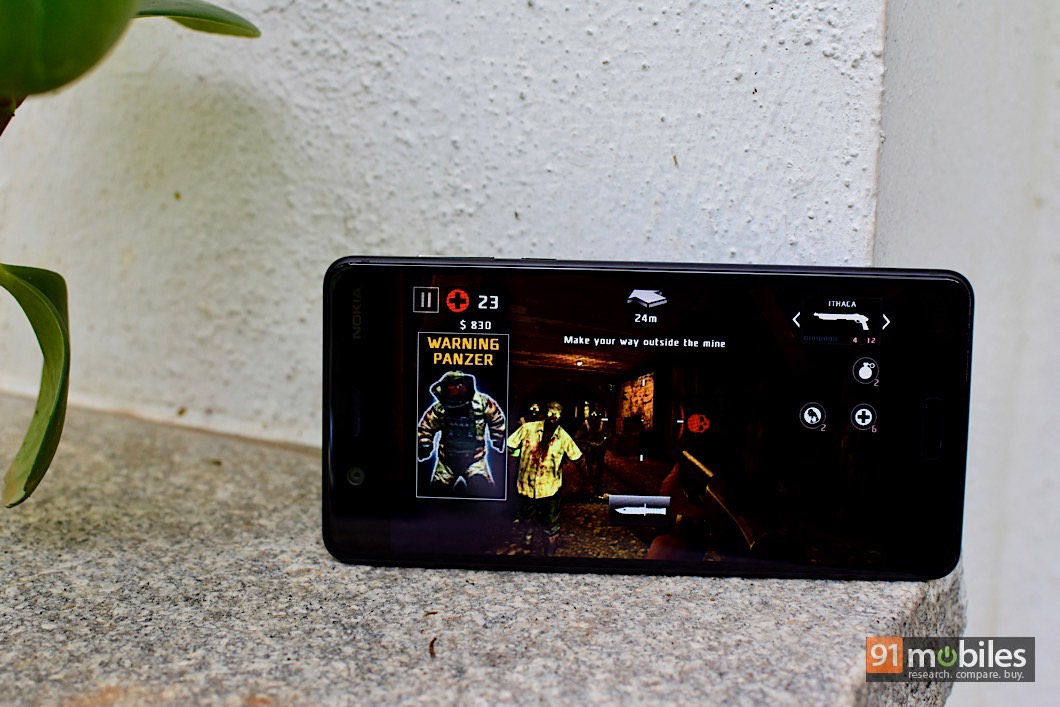 The Nokia 5 is powered by Qualcomm’s budget Snapdragon 430 SoC and Adreno 505 GPU, paired with just 2GB of RAM. By contrast, most of the competition in that price range, including the formidable Xiaomi Redmi Note 4, get the capable Snapdragon 625, which is one of the most reliable SoCs currently available. While the stock Android interface helps to some extent, I found the Nokia 5 to be a bit on the sluggish side in daily usage. You’ll find delays while opening some apps and multi-tasking, and a bit of lag while gaming as well. This could be a concern if you’re a power user, but for the more casual customer, it shouldn’t be a deal breaker.

The storage is disappointing at just 16GB, out of which around 8.5GB is available out of the box. This fills up pretty quickly after you install apps and games. The presence of a dedicated microSD card slot (up to 128GB) is a welcome addition though, since you don’t have to worry about losing one of the SIM card slots if you want to expand the storage.

The battery on the Nokia 5 is a 3,000mAh unit, and battery life was enough for a day’s usage, provided you’re not a heavy user. I managed a little under four hours of screen-on time on most days. In the 91mobiles battery drain test, the Nokia 5 lasted for just 10 hours and 15 minutes before running out of juice, which is quite disappointing. Recharging the device completely using the bundled charger took 2 hours and 21 minutes. 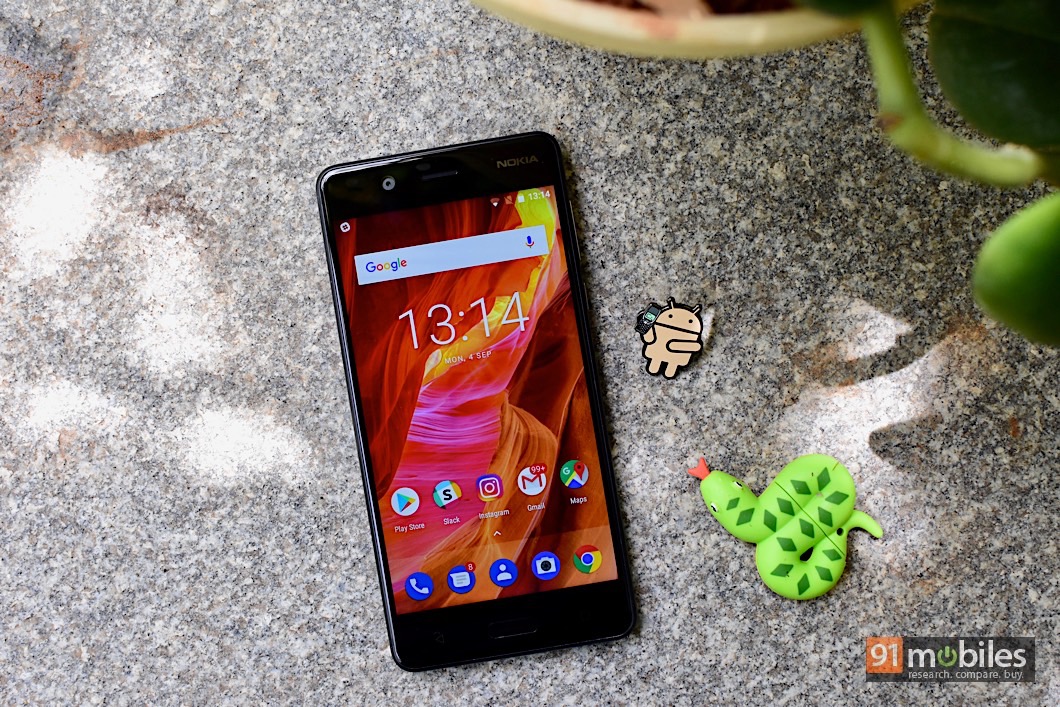 With the Nokia 5, HMD Global has gone back to the basics, and the mainstays of the device are the stock Android software and solid build quality. However, the smartphone lacks in other critical departments. Performance is sub-par for its category – the Snapdragon 430 SoC and 2GB RAM, even with the no-frills interface, are just not enough to ensure a lag-free user experience. The cameras are nothing to write home about either. At Rs 12,499, the Nokia 5 has a fair bit of competition from the Xiaomi Redmi Note 4 (review), Lenovo K8 Note (review) and Moto G5S – all capable devices that demand little compromise at their prices. The Nokia 5 should be on your shortlist if you’re interested in a pure Android interface with timely security patches and updates, but if a powerful daily driver is more suitable, I’d advise you to look elsewhere.