Realme was officially established as a brand in May this year and the first handset from the company, the Realme 1 (review), managed to attract a lot of attention due to its power-packed features and an attractive design, available at an affordable price. Just a few months later, the brand has now gone ahead and unveiled the successor to the original smartphone, aptly called the Realme 2, in India. Considering that we called the Realme 1 a promising start for the brand, read our detailed review of the Realme 2 to figure out if the new offering manages to follow in the footsteps or not.

If it ain’t broken, don’t fix it. Realme got a positive response for the diamond cut pattern on the first handset and the brand has kept the design on the back of the new phone almost similar to the original offering. While we are still talking about the back of the smartphone, the most notable addition needs to be pointed out — a fingerprint sensor. We wrote in the review of its predecessor that the absence of a fingerprint reader does stand out like a sore thumb (pun intended). The brand has taken the feedback seriously and introduced a fingerprint scanner on the back of the handset. The index finger lands comfortably on the sensor but interestingly, the module doesn’t feel very tactile. 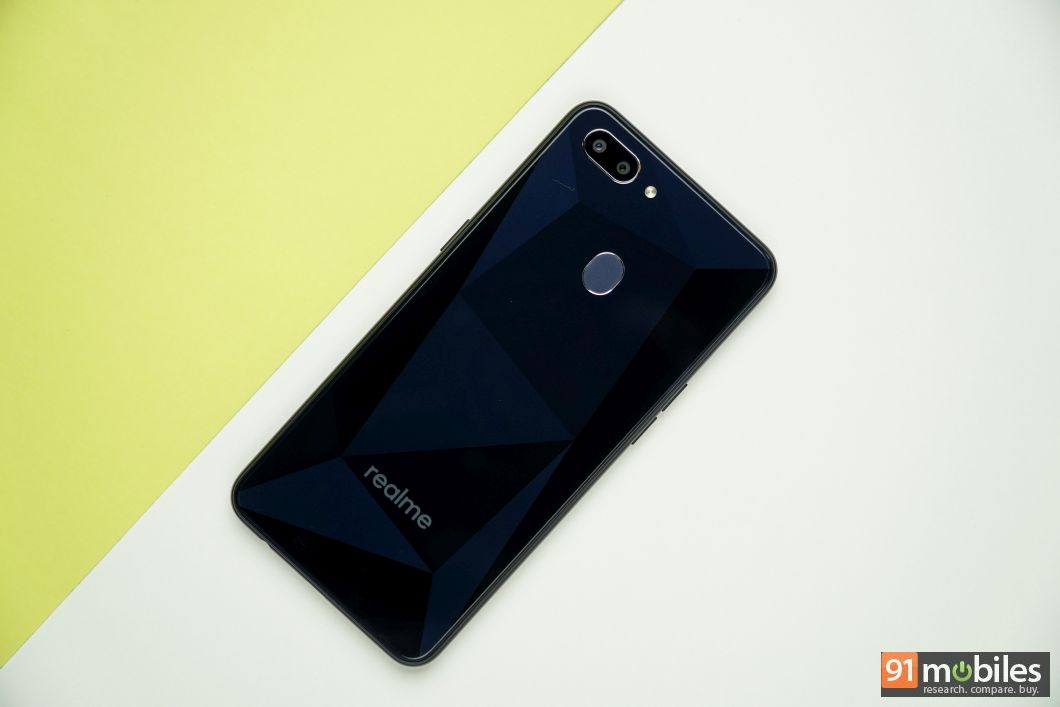 On our first few attempts, we didn’t even realise when exactly our fingerprints got registered. However, after spending some time with the smartphone, this becomes a non-issue. The phonemaker has kept the design minimal and there is just the brand name at the bottom with the dual-camera setup in a horizontal orientation on the top left.

Thanks to the matte finish on the sides of the handset, the Realme 2 never feels slippery in the hand, despite the glass-sandwich design. The power button is located on the right side of the smartphone and the volume buttons are located on the left spine below the SIM-card slot. All these buttons are easily accessible, even when using the smartphone with one hand. The handset packs in a large display but the overall body does not feel too large, as the brand has opted for a notch display which reduces the top bezel to a mere cut-out. That said, the bottom bezel is still reasonably thick, but hopefully, the brand will get rid of it in the next iteration of the phone.

At the bottom, you get the speaker grille, a micro-USB charging port, and a 3.5mm audio socket. The overall design of the Realme 2 is fairly clean and minimal. As the camera bump is not noticeable, the handset does not wobble when kept on the table, unlike other phones with protruding camera modules at the back. 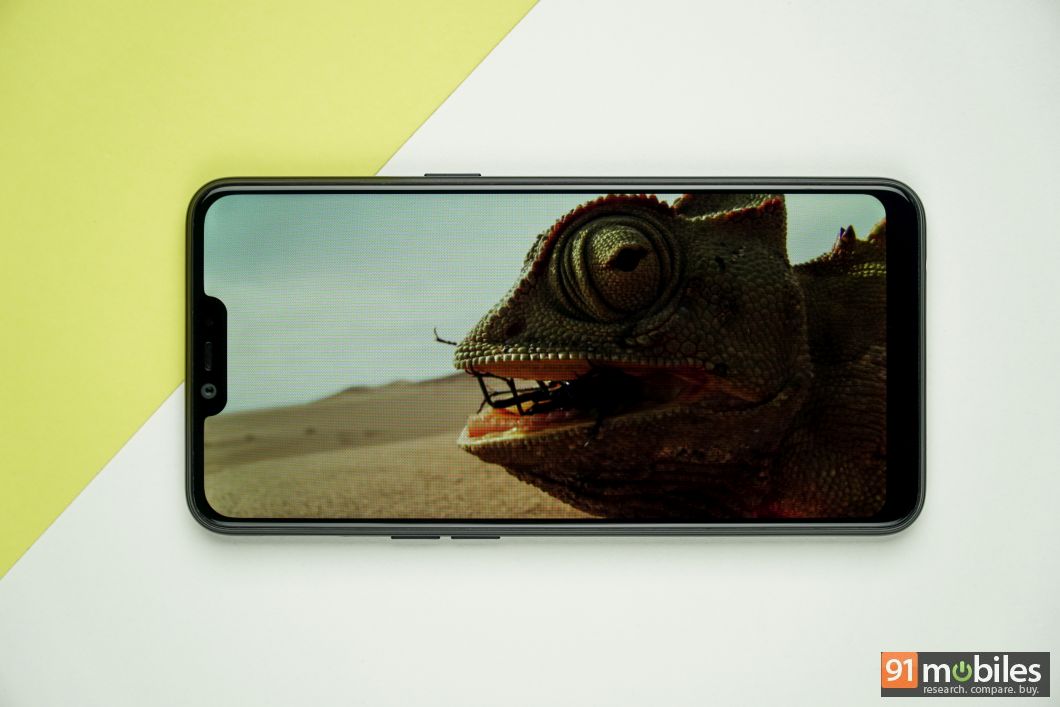 The Realme 2 ships with a 6.2-inch HD+ IPS LCD display with an aspect ratio of 19:9 to accommodate the notch at the top. The cut-out houses the front camera and a proximity sensor. The display appears quite vibrant in general and the viewing angles are mostly good. However, we were not particularly impressed with the maximum brightness levels offered by the display. In outdoor conditions, you can often find yourself adjusting the handset to make out the content on the screen. It’s also worth noting that the handset seems like a downgrade when compared to the debut offering from the brand as the Realme 1 sports a sharper full HD+ resolution. The newer iteration however, makes up for that in the next section…

One of the noteworthy upgrades for the Realme 2 has come in the optics department. The first generation handset featured just a single camera at the rear, but its successor features a dual-camera array. The rear camera module comprises a 13MP primary shooter and a 2MP depth sensor with f/2.2 and f/2.4 aperture, respectively. At the front, there’s an 8MP snapper to click selfies. 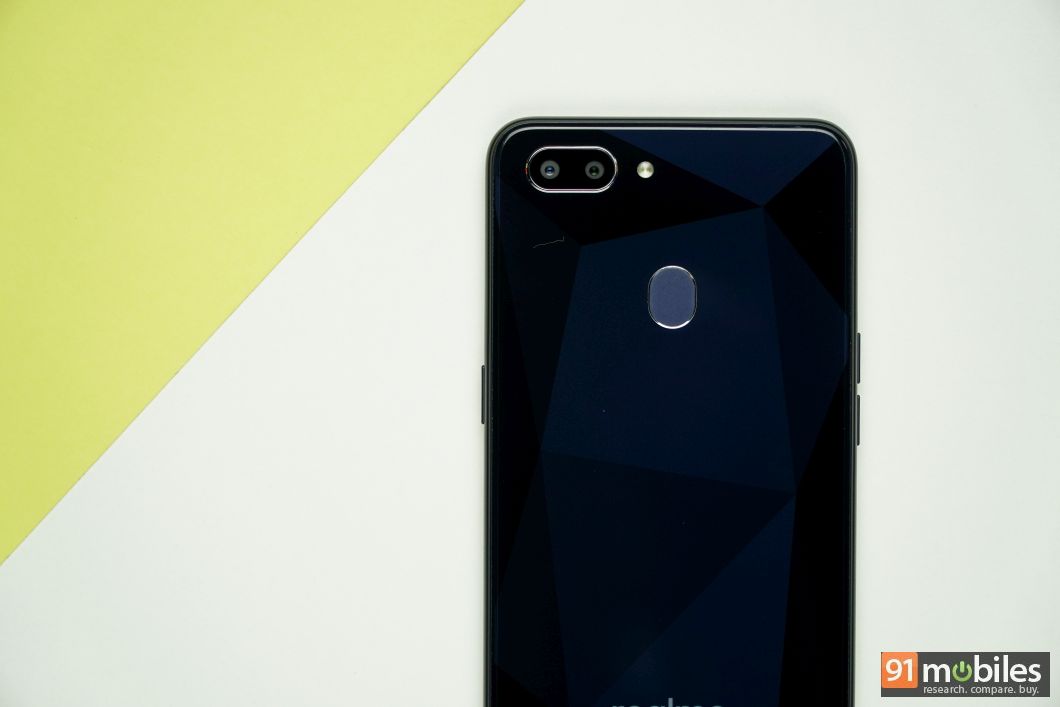 The camera app on the Realme 2 offers several camera modes, including Time-Lapse, Portrait, Sticker, and Panorama. There’s a dedicated option for HDR mode, available right from the home screen. The handset offers a beauty mode with adjustable levels from 1 to 6, which smoothen the skin to get rid of any blemishes. You also get the flash options from the top left on the screen. In the video mode, you can shoot videos at up to 1080p resolution.

Coming to the camera performance, the Realme 2 turned out to be a hit-and-miss affair during our testing. The colour reproduction offered by the handset was not accurate and the images appeared to be washed out in certain cases. However, it needs to be pointed out that the dual-camera setup manages to capture details really well. In low-light conditions, while there was plenty of noise in the pictures, the handset managed to show a high level of details. In the portrait mode, we struggled to get the focus right but when this mode worked, the images offered good depth-of-field effects. Coming to the selfies, the 8MP shooter manages to take decent pictures. Here’s a closer look at the imaging capabilities of the Realme 2 with the help of its camera samples.

In sum, the Realme 2 is one of the better camera smartphones available in the market under Rs 10,000. However, the higher-end variant of the handset does fall short when compared with the competition. 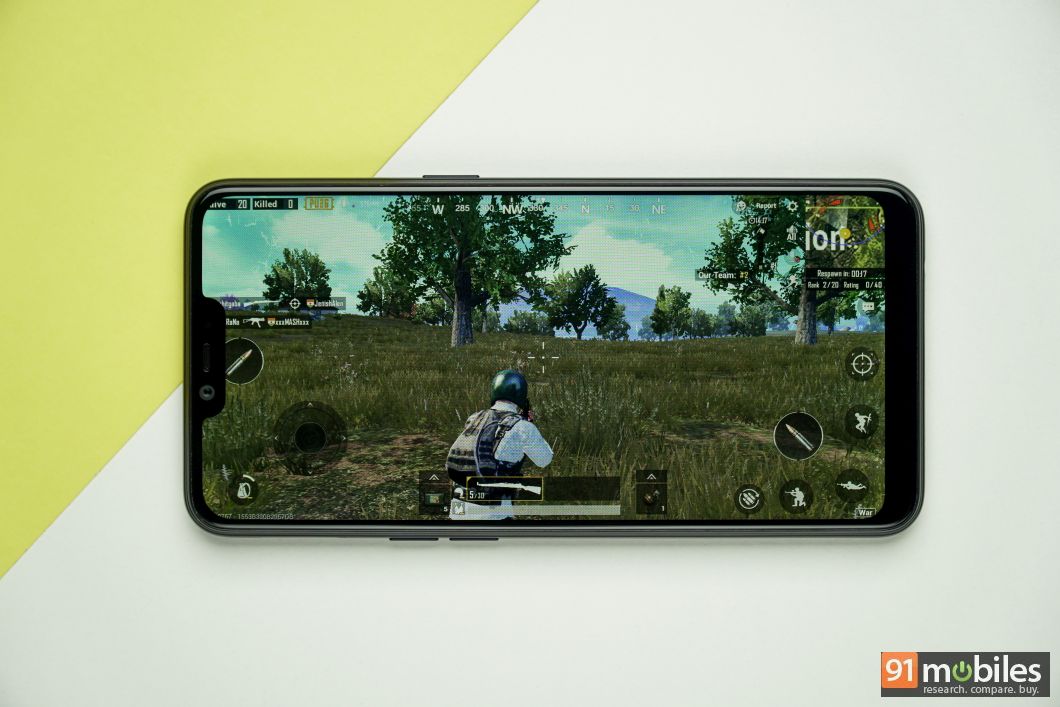 The new handset from Realme comes with some interesting changes under the hood. The Realme 2 is powered by Snapdragon 450 coupled with either 3GB or 4GB of RAM. There’s 32GB or 64GB of built-in storage — depending upon the RAM variant — which is further expandable via a microSD card. To recall, the Realme 1 was fuelled by the Helio P60 processor, which brought in some AI goodness. Now, the Snapdragon 450 is no slouch and has proved to be a popular choice for OEMs in this price range over the last year. However, without the dedicated AI features that the MediaTek SoC brought along, the new processor does feel like a step in the backward direction for the successor.

With the SD450, as you might expect, the handset Realme 2 to tackle some of the less intensive apps and games with ease, but finds itself struggling when it comes to the more demanding tasks. Multitasking was smooth however, thanks to our 4-gigs of RAM available on our review unit. Notably, we did not face any lags or stutter issues while navigating through the UI. To keep it short and sweet, if you are looking for a smartphone for gaming, there are better options available out there. 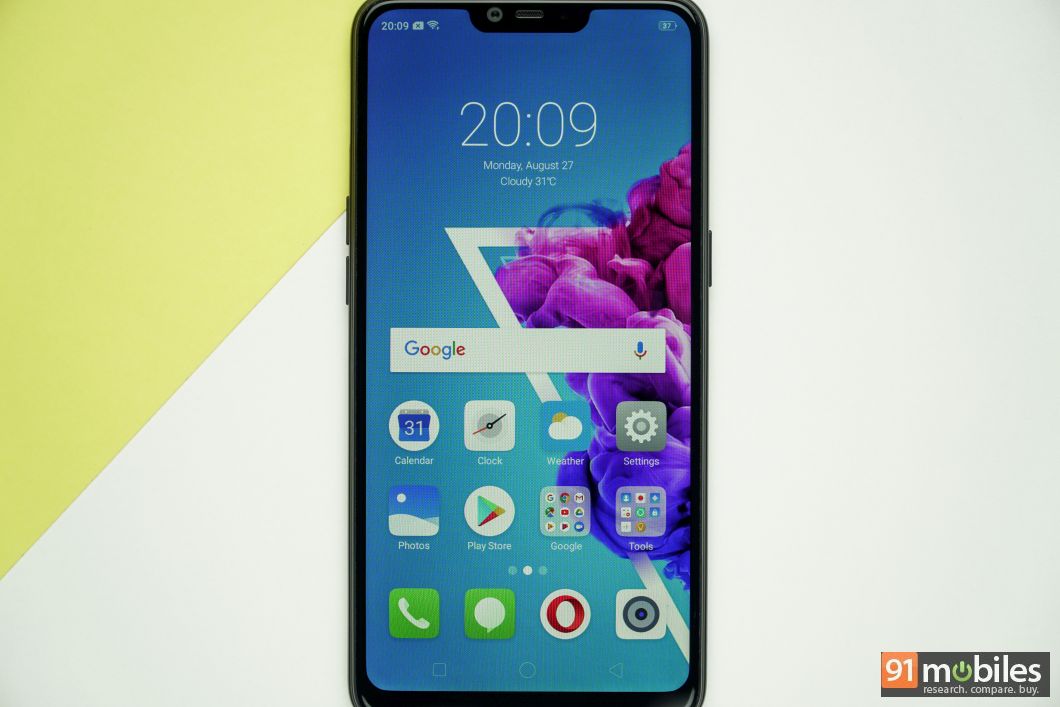 If we talk about the software, the Realme 2 runs Android 8.1 Oreo-based ColorOS 5.1 out of the box. There are no drastic changes in this department and you still get the features like an assistive ball, which works just like the Assistive Touch on iOS. There is a Smart Assistant feature that provides you with a quick view of the important information from certain apps like weather, steps tracker, and provides an easy access to quick functions. This option can be accessed by simply swiping towards the right on the home screen. In case you are bothered by it, you can also choose to switch it off from the settings menu.

There’s app lock, Kids Space, and Private Safe features, which means you get utility apps from the UI itself. You don’t necessarily need to head to Google Play and download third-party applications. The overall interface feels clean and in case you are into multitasking, you can take the help of features like Full Screen Multitasking to get things done in an efficient manner. 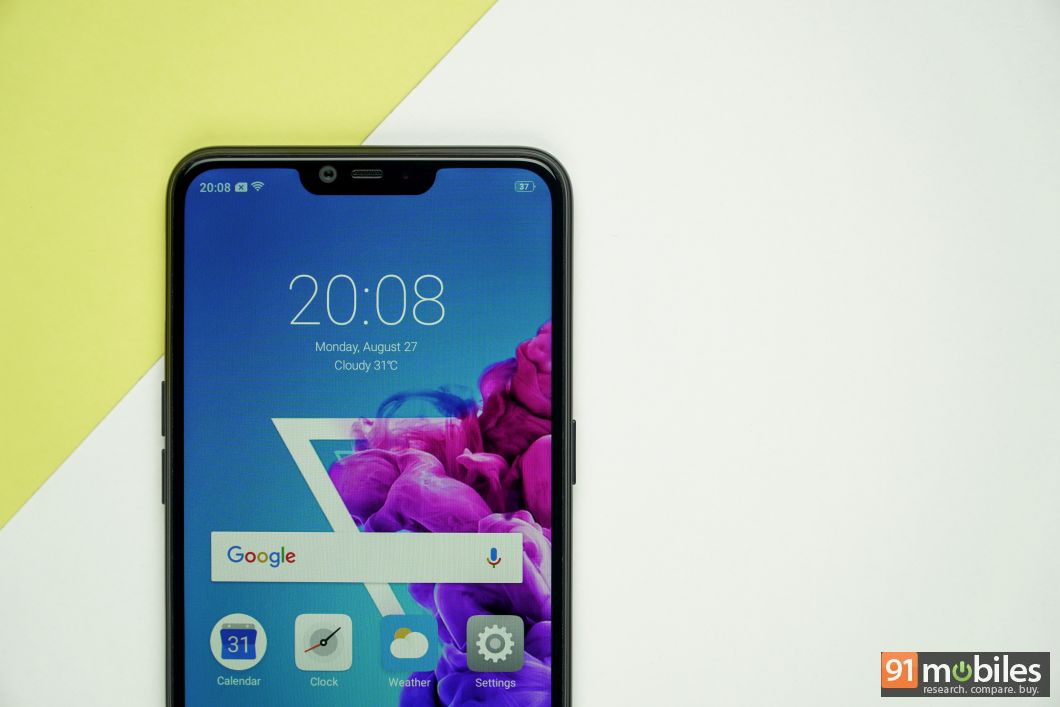 The Realme 1 shipped with a 3,410mAh battery and we did not have any issues with the backup offered by the smartphone. However, the company has surprised us by including a massive 4,230mAh battery this time around. In regular usage, the Realme 2 managed to easily last for a day and a half for us. In 91mobiles’ HD video loop test, the smartphone just dropped down to 50 percent levels in around 12 hours, which is extremely impressive by all means.

If you are the sort of person who likes to consume a lot of multimedia content on your handset and play a lot of games, the battery backup offered by the Realme 2 will ensure that you do not run out of juice by the end of the day. This is definitely one of the strongest upgrades and going to be a huge selling point for the smartphone.

The 3GB RAM variant of the Realme 2 has been priced at Rs 8,999, while the higher-end model will set you back by Rs 10,999. Considering the price is the same as the Realme 1, the choice of processor leaves us with mixed feelings. Especially if you consider the 4GB RAM version, which faces stiff competition from the likes of the ASUS ZenFone Max Pro M1 (review) and Honor 9N (review). While the ASUS handset comes powered by a more powerful processor and battery, the 9N also ships with a stunning glass-sandwich design along with sporting a better chipset. The competitors also offer sharper displays with full HD resolution.

If we talk about the affordable variant of the two, then things get better for the Realme 2 and it comes across as a stand-out offering. The first handset was recommended by us as one of the best options available in the price range and with the new offering, you get better cameras and longer battery life as well. Even though the processor choice serves as a bit of letdown — especially because its predecessor set a new benchmark in the sub-Rs 10k segment — the other improvements certainly make the Realme 2’s base model a compelling offering. The smartphone also comes across as a better buy in comparison to rivals like the Xiaomi Redmi Y2 (review) and Redmi Note 5 (review).

Honor 20i review: an affordable smartphone with flagship imaging prowess

Nokia 3.2 review: a bigger display at a lower price