The numero uno phone maker is basking in the glory of its latest flagships, the S8 and S8 Plus (review), but that doesn’t mean it’s losing its sight on the other segments. In fact, currently, Samsung remains the only full-range player with its smart phones available from Rs 5,000 going all the way up to Rs 65,000. Sitting almost in the middle of its range is the C series, which can be considered as the brands foray into the burgeoning flagship killer segment, for it brings top-notch specs to the mid-range. While we have already reviewed the Galaxy C9 Pro, it’s smaller sibling, the C7 Pro (first impressions) was launched recently in India. Priced at Rs 27,999, the device goes up directly against the popular OnePlus 3T, but can it succeed? Let’s find out in our in-depth review. 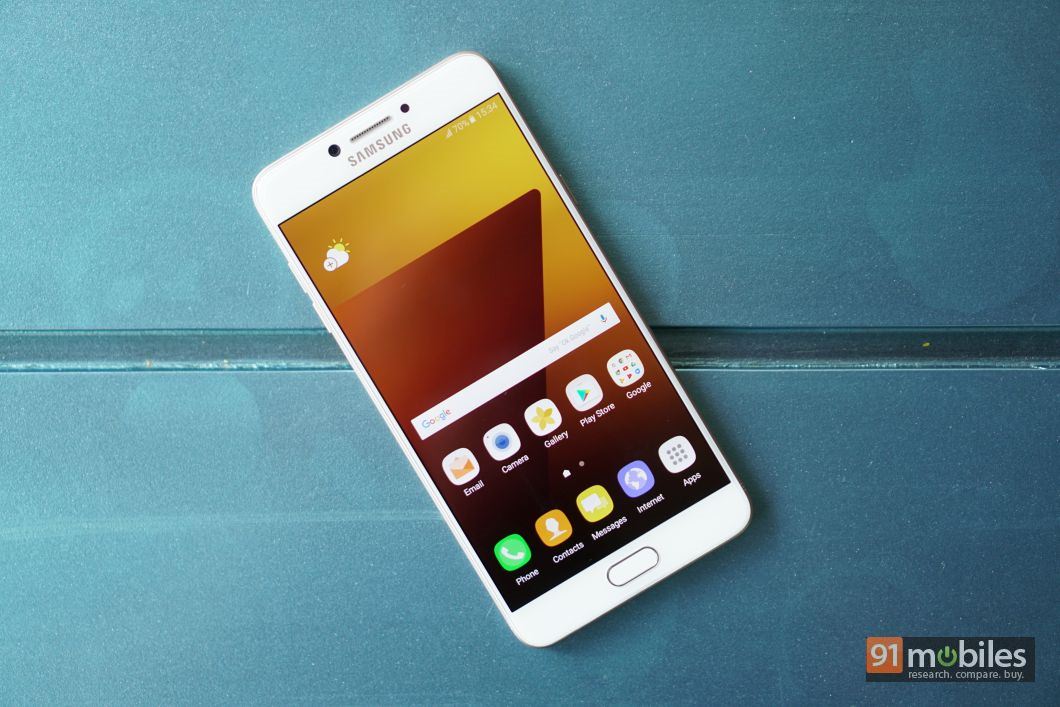 While we’re seeing a reversal of trends as manufacturers are moving back towards compact smartphones, the C series from Samsung caters to phablet enthusiasts. While the C9 Pro sports a massive 6-inch display, the Samsung Galaxy C7 Pro features a relatively smaller 5.7-inch screen. That doesn’t mean that it can be operated single-handedly though, because it still has a large footprint measuring 156.5 x 77.2mm in terms of height and width. Your thumb won’t reach the corners unless you perform finger gymnastics, and hence it requires two hands to use it. 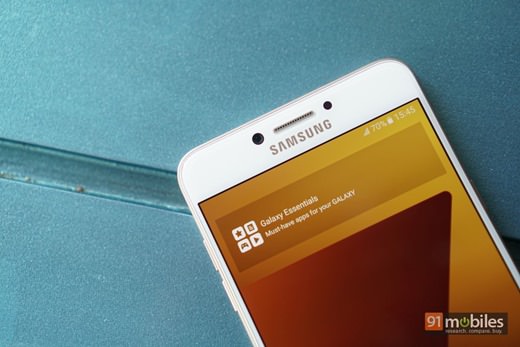 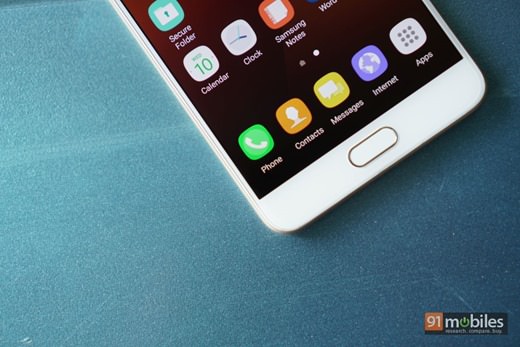 Design wise, it’s interesting that the Korean behemoth is giving a different treatment to devices in different series. The C7 Pros design differs from the smartphones in the Galaxy A range or the mid-range J series. Its front is dominated by the display panel, which is flanked by an earpiece, a couple of sensors, a secondary shooter and Samsungs logo above, and a physical home button below, which is accompanied by the overview button and the return key. The home button hides the fingerprint sensor underneath, which unlocks the handset quickly, and is quite accurate too.

The display gets a 2.5D glass which curves towards the edges, and adds to the charm of the Samsung Galaxy C7 Pro. The placement of buttons and ports is nothing surprising, though it’s interesting to see that both the 3.5mm audio socket and the USB-Type C port have been placed at the base. 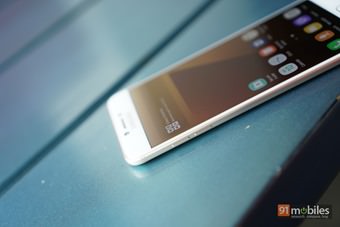 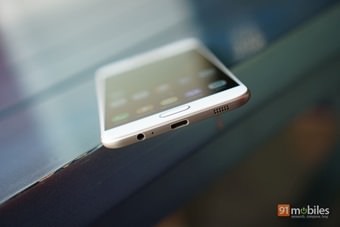 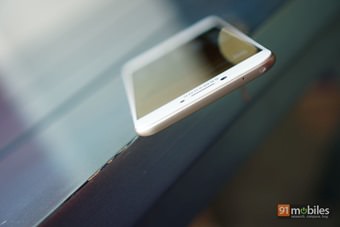 The rear panel also features dual curves, which aids handling. The primary camera juts out slightly and is accompanied by a dual-tone LED flash. Our review unit sports a premium gold finish, and the back plate sports an embossed Samsung logo, which adds to its classy looks. The Samsung Galaxy C7 Pro will also be sold in an all-black hue. To ensure that the antenna bands don’t spoil the uniformity, the device has three antenna lines at the top and bottom, which many manufacturers refer to as a six-string design. 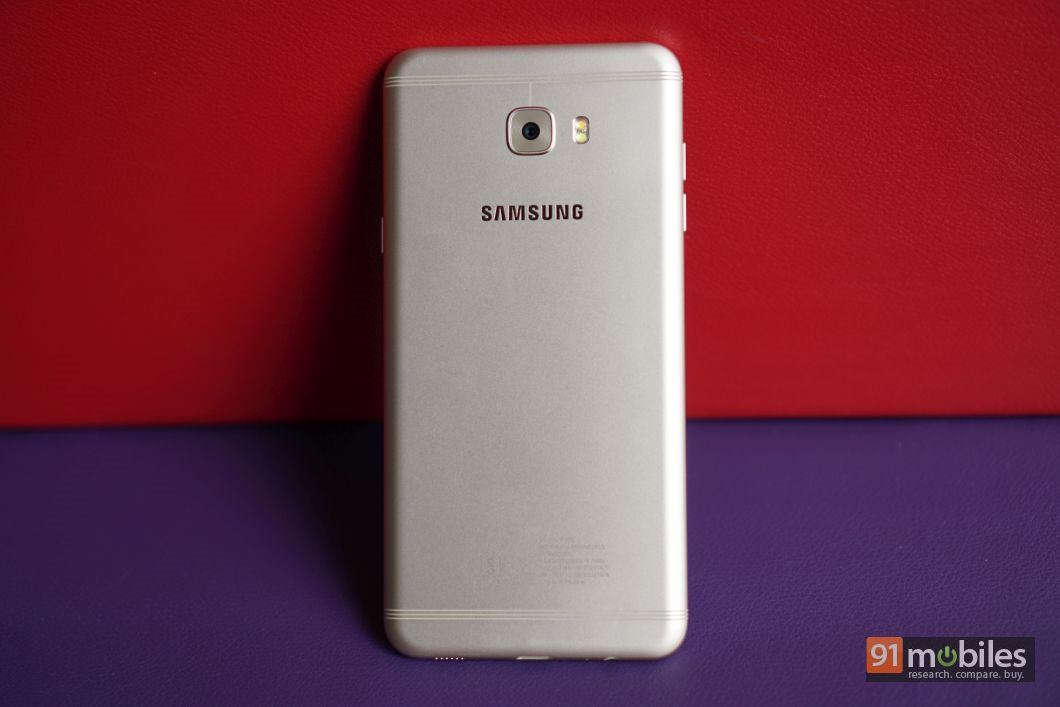 The 5.7-inch AMOLED panel offers vibrant and punchy colours, which is sharp as well with a pixel density of 386ppi. The brightness levels are adequate too, for reading it outdoors. We also liked the blue-light filter, which when enabled in dim environments, reduces eye strain. The C7 Pro also gets the always-on display feature, which ensures that you don’t have the FOMO as it displays missed notifications without the need of unlocking it. 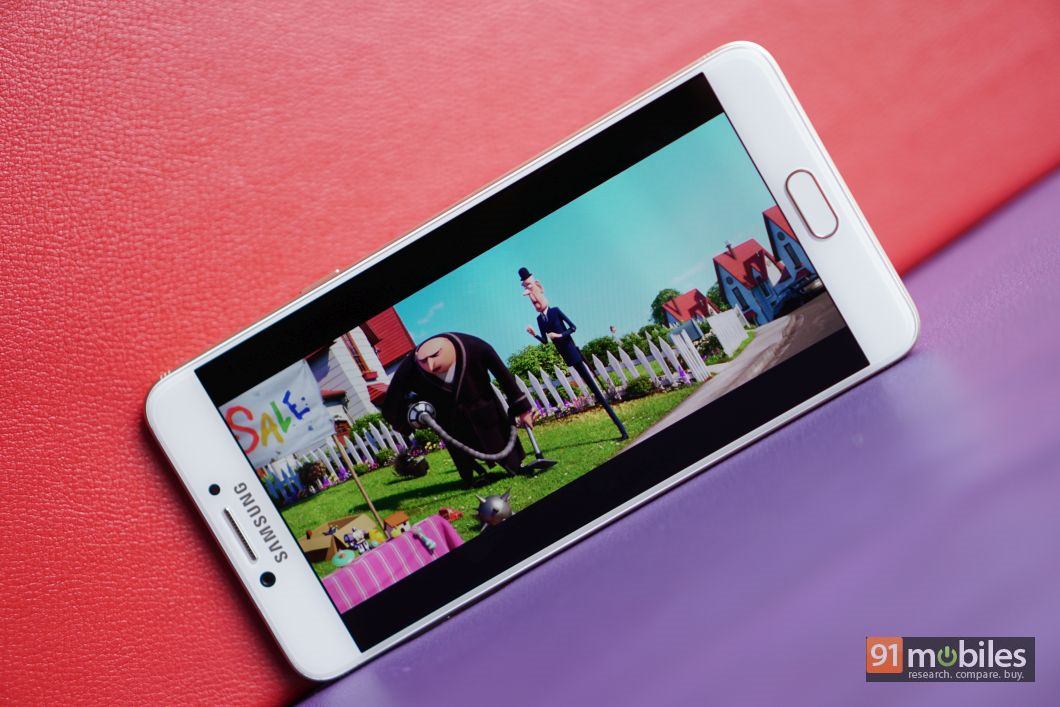 Camera: sweet 16, from both the back and front 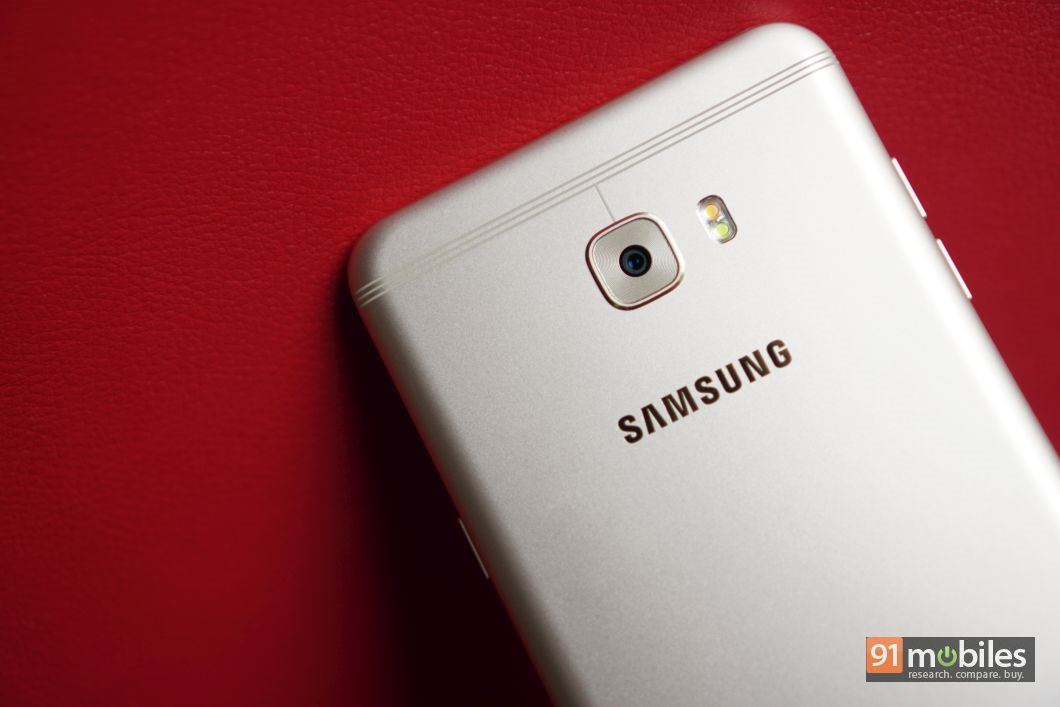 Similar to its bigger brother, the Samsung Galaxy C7 Pro boasts 16-meg snappers, at the back as well as the front. Both the cameras have an aperture of f/1.9, to allow more light to enter the CMOS sensor. The default camera app is typically Samsung-esque.. with all the options present up front. In the portrait mode, you get the ability to capture images, record a video or preview your clicks with the controls available at the bottom. The top panel has a settings button, a flash toggle and the option to switch to the front camera. To see different modes and filters, you can swipe to the left or right respectively. The Gallery app on the phone also follows the footprints of Google Photos, as it automatically makes collages, videos or stories based on certain themes by combining the images captured by you. 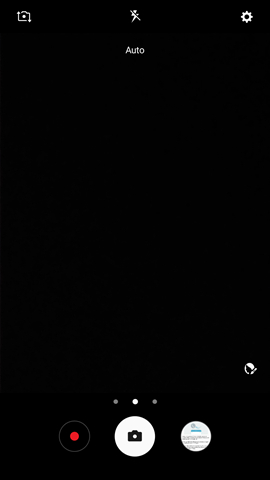 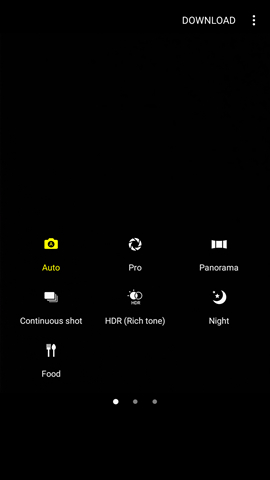 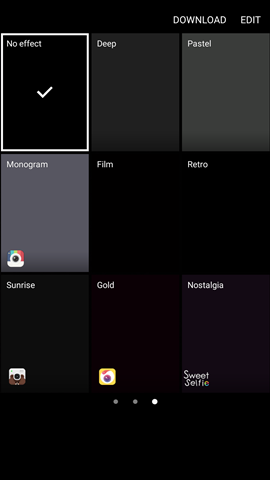 Quality-wise, the Galaxy C7 Pro manages to deliver good output in daylight. The images have good details and fairly accurate colour reproduction. The HDR mode is effective too, as it enhances the contrast, while close-up images show a bit of bokeh effect, adding to their charm. In low light, the phablet is able to click decent images even though they’re noticeably grainy. The dual-tone LED flash does help in illuminating the scene uniformly. The selfies are incredibly sharp, and thanks to the screen flash, you can capture them irrespective of lighting conditions. Here are a few camera samples.

In terms of video recording, the phone can shoot some really good footage. Sadly though, the max resolution maxes out at 1080p, which is disappointing considering 4k recording is now becoming a norm even in the budget segment.

Hardware and software: races ahead with speed and efficiency

At the core of the Galaxy C7 Pro ticks the Snapdragon 626 processor, which is a minor upgrade to our favourite mid-range SD625 chipset. The SoCs eight cores are clocked at 2.2GHz. In our usage, it ensured smooth navigation and quick opening of apps. Gaming wasn’t an issue either, with the Adreno 506 graphics engine running at 650MHz. We loved the off-roading experience onAsphalt Extreme. Thanks to 4GB RAM, multitasking isn’t an issue either, although apps do take some time in returning to their previous state when you switch back to them. 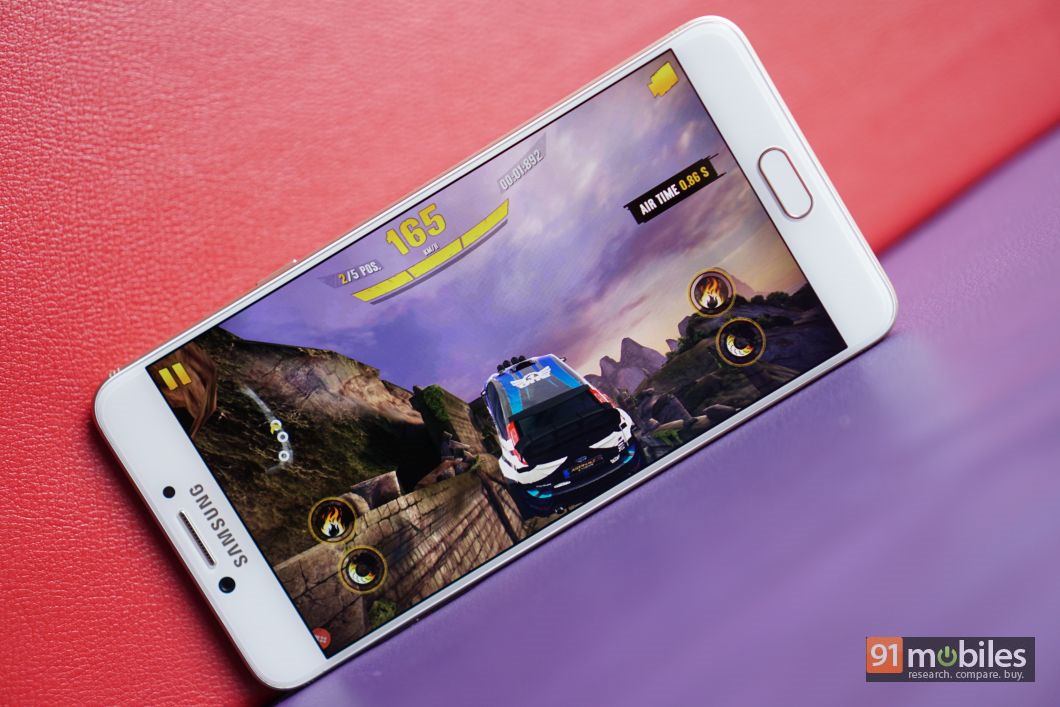 The Snapdragon 625 isn’t known for heating up, and the same is the case with its successor. Even after long sessions of gaming or using GPS for navigation, the phone only got slightly warm.

The Samsung Galaxy C7 Pro ships with an ample 64GB storage, which offers around 51.5GB to the end user. If that’s not enough, you can also add more storage using a microSD card. 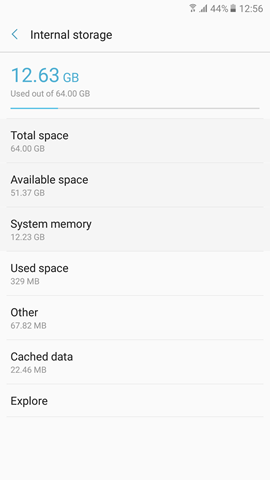 In the software department, the C7 Pro boots Android Marshmallow, with the proprietary skin on top. The device comes with quite a few preloaded apps including Facebook, Opera Max, and Microsofts app suite. Otherwise, the interface is similar to other offerings from the Chaebol a dedicated home screen for Briefing and features like multi-window and pop-up window.Secure Folder is quite useful as it lets one store apps, photos, etc. privately and hidden from others. There’s Secure WiFi too, which lets you connect to public Wi-Fi networks securely as it encrypts your details while accessing websites or social media. 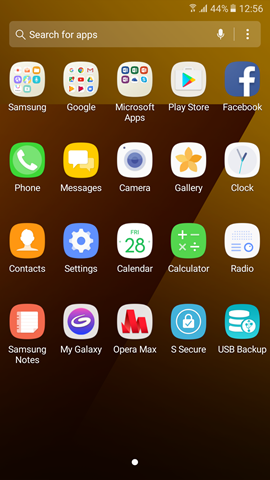 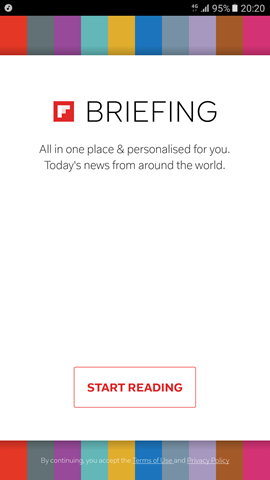 Battery and more: all set for the marathon

The Samsung Galaxy C7 Pro is quite slim at 7mm, and yet the company has managed to pack in a 3,300mAh battery inside. Coupled with the power-efficient silicon, the handset is able to stay live for long periods without needing a charge. Charged fully at 5 am in the morning, it was able to go on until the next day with extensive usage of calls and messages, capturing photos, internet surfing, listening to music, and a little bit of gaming. If you use it more judiciously, then it’ll surely won’t require juicing up before the next day. Normally, it should be able to deliver a screen-on time of four hours. In our battery test, wherein we play a 720p video on loop with both the brightness and volume set at 50 percent, the C7 Pro was able to last almost 20 hours a result which even beats the figures from phones with as much as 4,000mAh batteries. 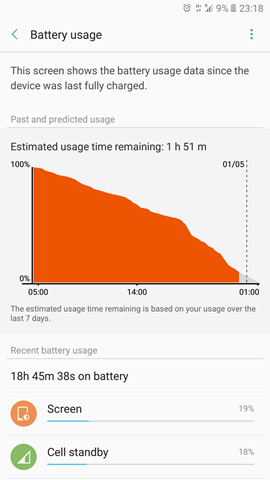 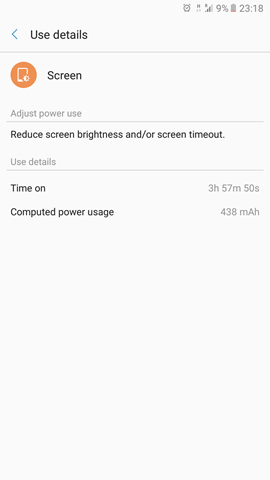 Like its siblings, you can extend the battery life by choosing between medium or maximum power saving modes. With the bundled adapter, you can juice up the Samsung Galaxy C7 Pro in about an hour and a half, as it supports Qualcomm’s Quick Charge 2.0.

The C7 Pro features a dual hybrid slot with support for 4G, and the other connectivity options include Wi-Fi, Bluetooth, NFC and GPS. While the phone has Near Field Communication, its strange that it doesn’t support Samsung Pay, which the company recently launched in India. The phablet has a single speaker, which offers decent output. It’s not extremely loud, but delivers crisp audio.

At a time when flagship killers have started to reign the smartphone market, it seems that Samsung is also venturing into the segment so that it can disrupt itself before the competition does that. The Samsung Galaxy C7 Pro is a wholesome package with a slim metallic build, large and crisp display, decent cameras, and powerful performance that lasts a day with ease.

However, if you consider its pricing of Rs 27,999, then it seems to be slightly on the higher side considering the features on offer, especially since its available to buy only online. Add to it the fact that it goes right up against the company which can be considered as the progenitor of flagship killer term. Its biggest challenger is the OnePlus 3T (review) which trumps it in terms of the raw performance with the top-tier Snapdragon 821 and 6GB RAM. The C7 Pro also faces competition from its own sibling, the Galaxy A5 (2017) (review), which many might consider as more premium-looking, not to mention that the latter is also dust- and water-proof. If a large-screen phablet is what you’re after, then the OPPO F3 Plus (review) is also an excellent choice, which is now available around Rs 28,000 thanks to various discounts. 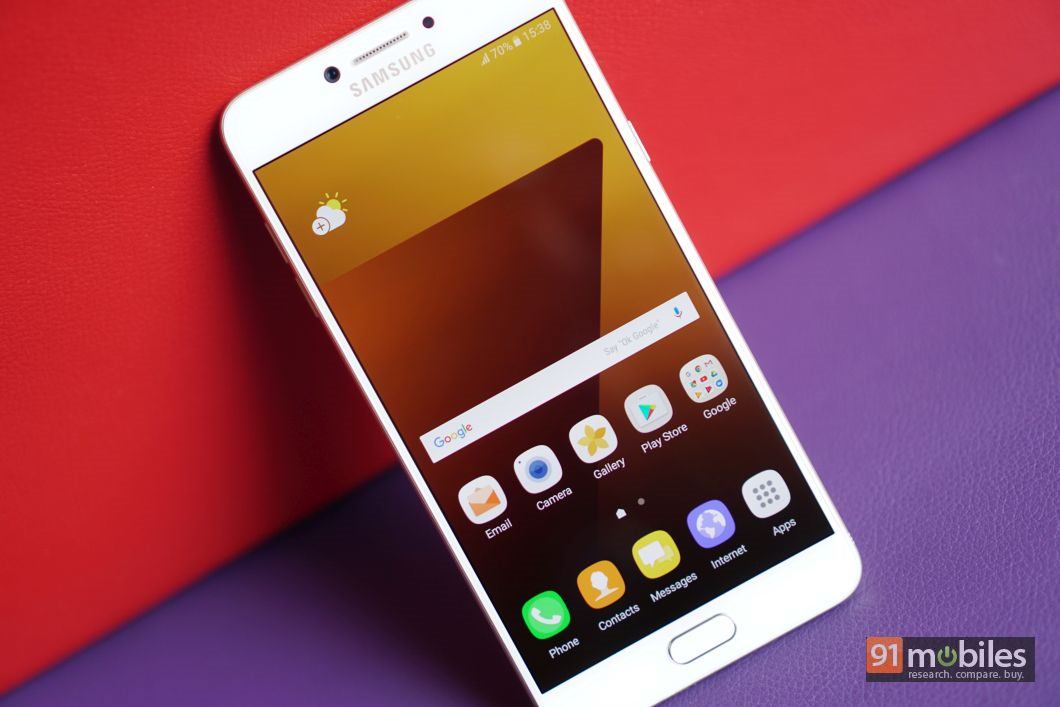 To conclude, the Samsung Galaxy C7 Pro would have been the phone to beat if it was priced in the region of Rs 25,000. But for now, you might want to consider other alternatives available in this price bracket.