For a company like Samsung, innovation can take different forms. The South Korean brand has introduced some cutting-edge features through its premium Galaxy lineup, but of late, the company’s flagship features are transcending to the mid-range. In fact, lately, the company has taken a more adventurous route with mid-range offerings as compared to its flagship models. Case in point, the Galaxy A8+ (review). Launched earlier this year, it became the first handset from the company to feature a front-facing dual-camera setup. And the recently-unveiled Galaxy A7 (2018) (first impressions) became the first Samsung phone to ship with triple shooters at the back.

Carrying forward this trend, the company has now launched the Galaxy J6+ (first impressions), which features a side-mounted fingerprint sensor. Considering that this is a bold design choice from the company, does the rest of the phone hold up well with the novelty factor? Read our detailed review to find out. 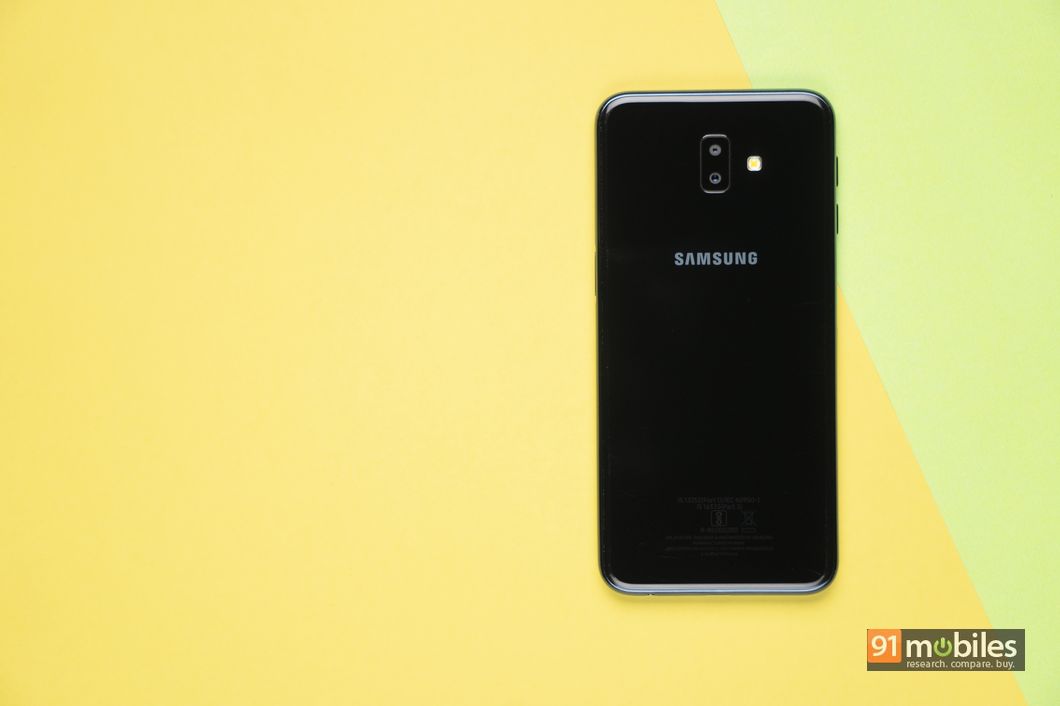 Without wasting any time, let’s directly address the elephant in the room, i.e. the side-mounted power button with an integrated fingerprint sensor. If you are wondering why the company decided to shift the fingerprint sensor from its usual position at the back to the right spine of the Samsung Galaxy J6+, Samsung says that the new placement helps you unlock the handset more quickly and with convenience. Does the claim hold up? The answer is quite obvious. As most of us wake up our handsets with the power button before unlocking, the location of the fingerprint sensor is quite convenient on the J6+. Unfortunately, the power button itself is not very tactile and almost blends into the side frame of the handset. While this offers a clean design, in actual usage, you might take some time to get used to it. However, the fingerprint sensor works well and unlocks the handset in no time once you get into the habit of placing your thumb/finger correctly. 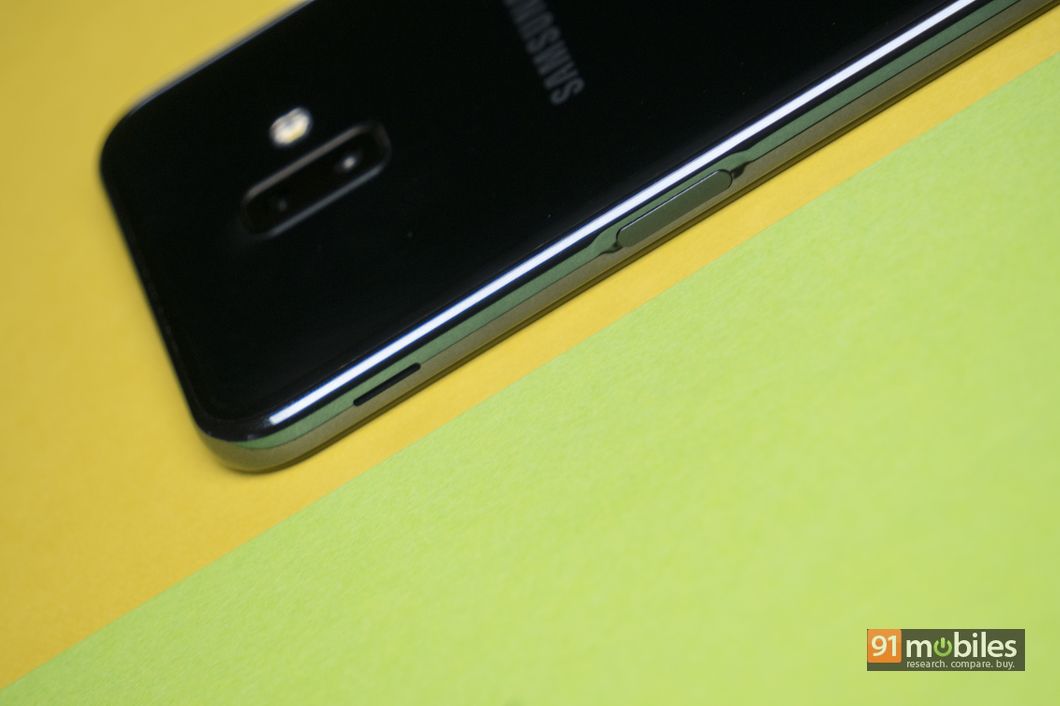 Moving on to other aspects of the design, Samsung’s Galaxy J6+ comes with a glass-sandwich design, which means that the back is a magnet for fingerprints and smudges. At this point, most manufacturers have implemented glass backs on their offerings and we have frankly gotten used to it. Sans the fingerprint sensor, the rear panel of the handset looks unusually clean. There is a dual-camera setup in a vertical orientation at top-centre, assisted by an LED flash module. There’s the Samsung branding right in the middle, followed by some regulatory information in the lower half but, thankfully, the font colour is so subdued that it’s hardly noticeable. You can have a closer look at the phone through the design gallery embedded below.

As you can see, on the right spine, the loudspeaker is located right above the power button/fingerprint sensor. To put things simply, this is not the ideal location for the speaker. While playing games, we unintentionally managed to cover the speaker with our hands every now and then. The left edge is home to the slot for the primary SIM card and then there is another slot for the secondary SIM card and microSD card. The volume buttons are located on the top part of the left spine but are easily accessible when using the phone with one hand. The 3.5mm audio socket and the micro-USB charging port form the base of the smartphone and there are no controls on the top. We would have loved to have the USB Type-C charging port in the phone, however. 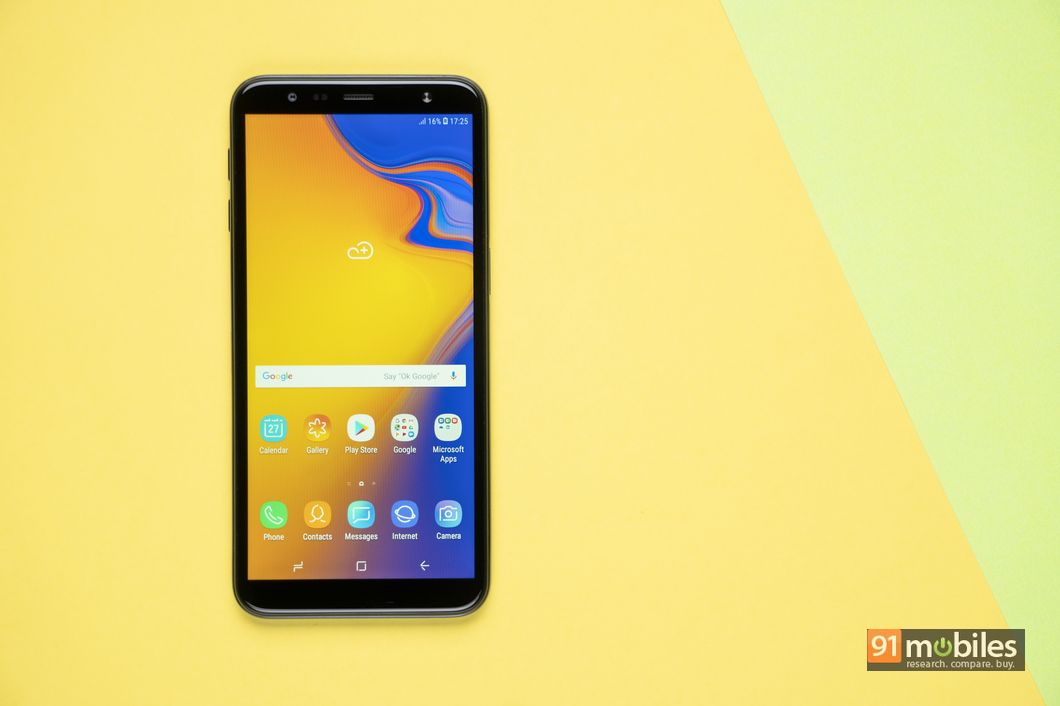 Coming to the display, the Galaxy J6+ ships with a 6-inch HD+ Infinity Display with an 18.5:9 aspect ratio. Samsung has a reputation for offering some of the best displays on the market and even though you don’t get quite the same quality as flagship offerings, the display panel is good for the price range. You will not face any difficulties using the handset in outdoor conditions as the peak brightness level is impressive. We did not face any issues with the viewing angles as well, though the screen isn’t exactly sharp. 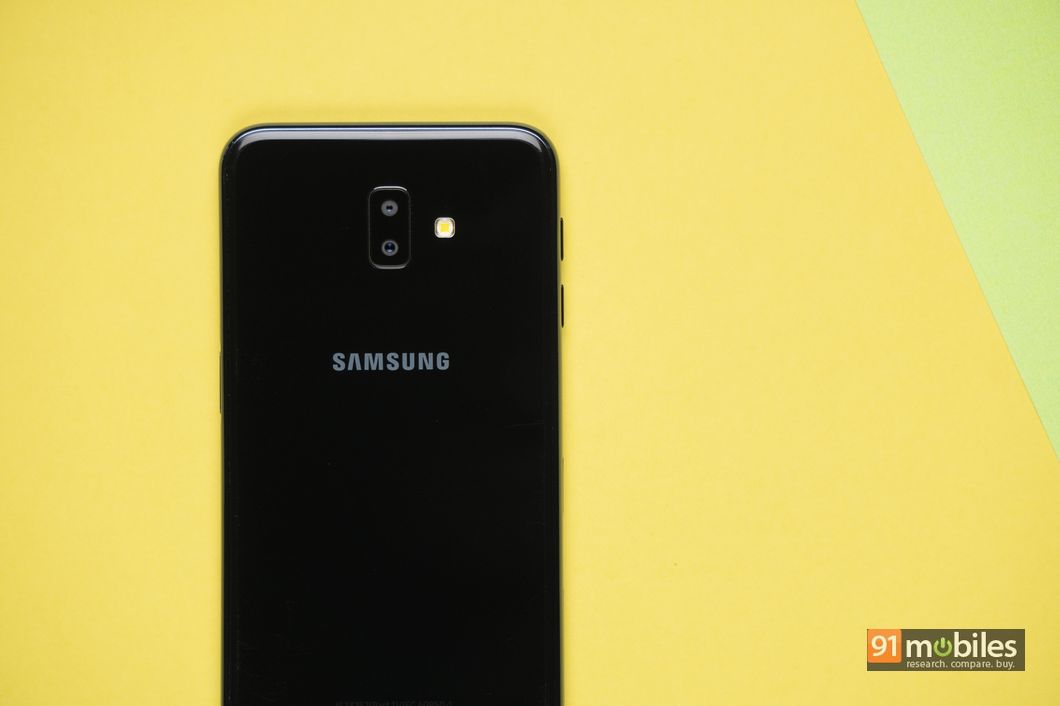 In the default camera app, you get the option to click pictures in beauty mode, Panorama mode, continuous shot, and with stickers. There is also the Live Focus mode, which essentially allows you to take photos with the bokeh mode and adjust the background blur even after clicking the picture. With the Pro mode, as you might expect, you will get the option to adjust the ISO levels and white balance.

While its good to see the Chaebol bringing dual cameras to the mid-tier segment, that doesn’t translate into the quality. Images captured in daylight are about average in terms of sharpness levels, and the phone struggles in low-light conditions too. In ample lighting conditions, colour reproduction seems to be accurate, but zoom into them and you’ll find them to be quite grainy. The same remains to be the case in dim settings as well. In the video mode, you get the option to shoot videos in up to 1080p resolution, however the quality is nothing to write home about. With the secondary depth sensor, the  Galaxy J6+ manages to offer a good depth-of-field effect, provided the conditions are apt. Although, it’s a hit-and-miss affair with the shooter unable to separate the edges of the subject from the background. 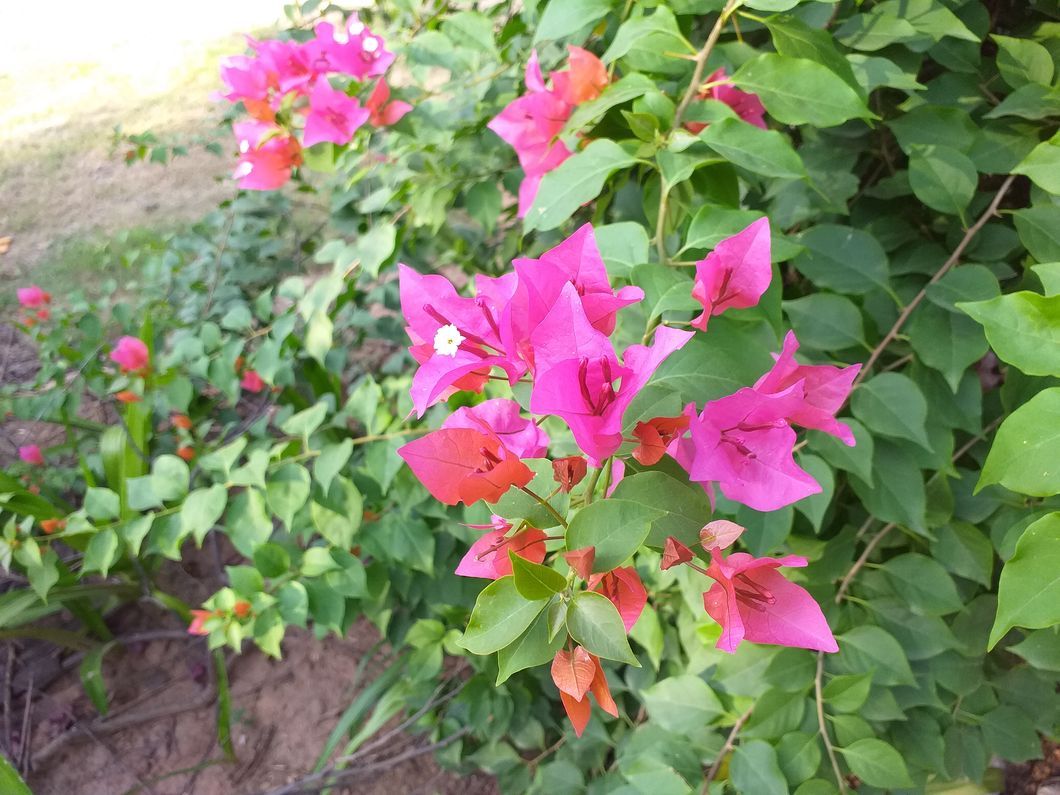 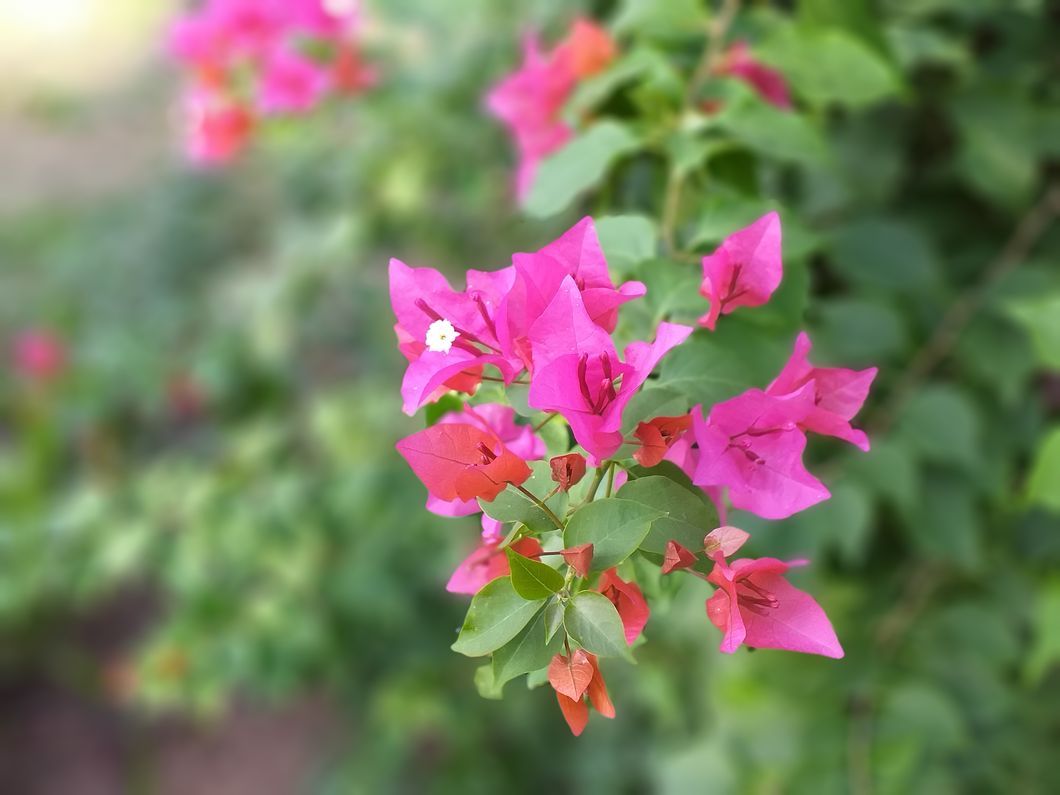 The story doesn’t change for selfies either, with the images lacking on detail. Thanks to software processing, you do get the option to click bokeh shots with Selfie Focus feature. However, the skin appears to be on smoother side, and the subject’s edges appear blurred-out. Take a dekko at the camera samples of the Samsung Galaxy J6+.

The Galaxy J6+ runs the Android 8.1 Oreo-based Experience UI 9.5 out of the box. This means you also get some of the company’s proprietary features preloaded into the handset. The phone comes preinstalled with Samsung Mall, Samsung Pay mini, and Samsung Max. For those who are unaware, Samsung Mall is an app that helps users discover items across e-commerce platforms, while Pay mini is the stripped-down version of the company’s payments app. There is the Bixby digital assistant on the phone as well, minus the dedicated button (thank you, Samsung). You can access the assistant by swiping right on the home screen. However, I never felt the need to summon the digital assistant in my daily usage. 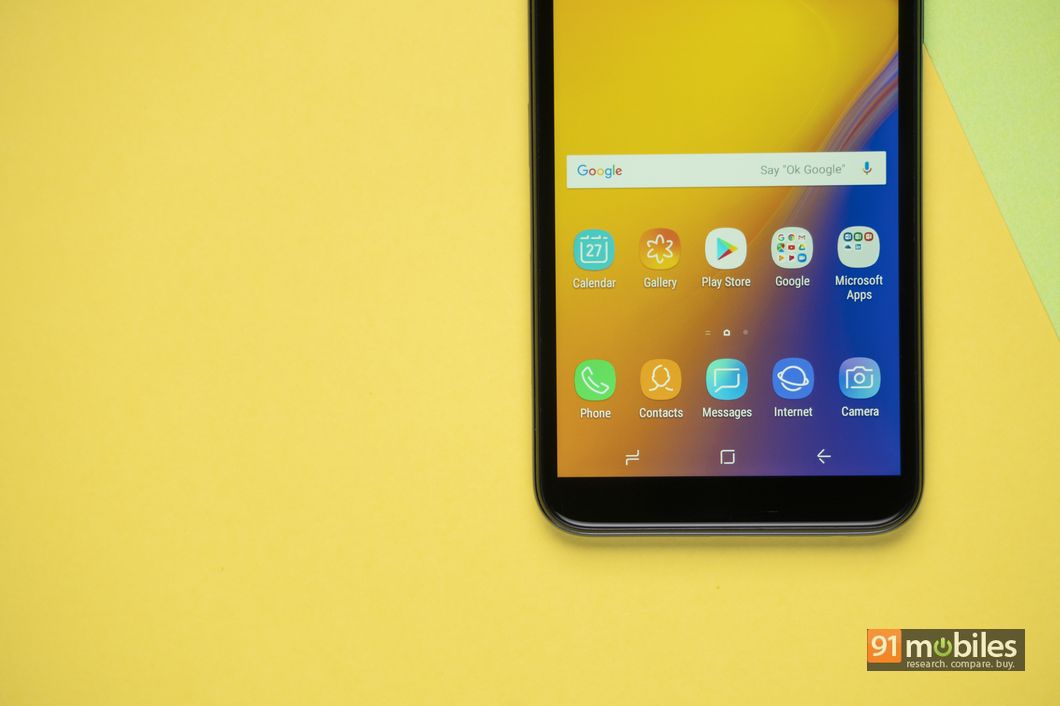 There is an Emotify feature for chats that allows users to create their own digital avatar. We found this feature to be amusing, but the novelty factor dries up fast. Notably, the Galaxy J6+ also lets you directly install the applications to your microSD card, which is quite useful. With Finger Sensor Gestures, you can use the fingerprint reader to bring down the notification shade by swiping down.

Coming to possibly the weakest point of the handset, the Samsung Galaxy J6+ is powered by the Snapdragon 425  SoC, coupled with 4GB of RAM and 64GB of storage. The choice of the chipset can’t be described as ideal, especially considering that some of the other brands are currently offering the Snapdragon 660 processor in this segment. Having said that, we didn’t face any major issues with the smartphone in the day-to-day usage. Of course, you should not expect the phone to excel at running graphically-intensive games like PUBG, though light games and apps run perfectly well. We did not face any stutter or lag issues navigating within the platform as well. Thanks to the 4 gigs of RAM, multitasking was also smooth.

The Samsung Galaxy J6+ sips juice from a 3,300mAh battery. Even though this capacity doesn’t appear massive on paper, the phone’s real-life performance in this department is quite impressive. The handset owes this performance partly to the HD+ panel and a power-efficient chipset. 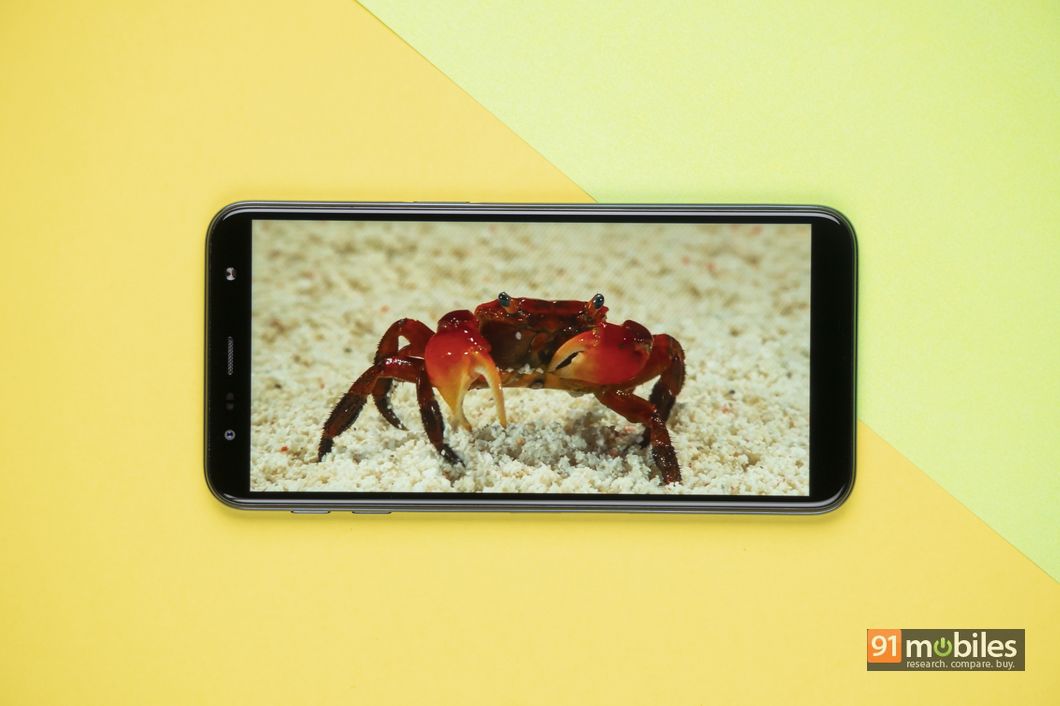 In our daily use, the phone managed to easily last a full day with ease. For light users, the handset might manage to last more than a day as well. For reference, the smartphone was able to playback an HD video on loop for a little more than 13 hours and 30 minutes, which is quite impressive.

Samsung is one of the biggest players in the market and a go-to choice for users who prefer known brands with reliable customer service. For these customers, the Galaxy J6+ is an impressive upgrade that brings modern design elements at a reasonably affordable price of Rs 15,990. The impressive battery life definitely makes the handset more appealing as well.

However, for those of you who want more horsepower in your smartphone, there are other choices in the market that offer better value for money like the Realme 2 Pro (review), Motorola One Power (review), and ASUS Zenfone Max Pro M1 (review). All of these handsets come with full HD+ displays, powerful chipsets in the SD6xx series, better shooters and beefier battery capacities.

Samsung Student Advantage Program is back with the best deals you can get on phones, laptops, and more