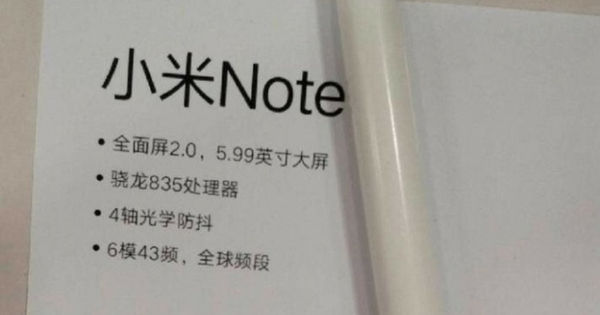 Xiaomi is all set to host its 2018 Annual Product Launch Event in China on May 31st. The brand has already confirmed that the event is likely to witness multiple product launches, including the flagship smartphone, the Xiaomi Mi 8, and Mi Band 3. Now, it seems that the company might launch a mid-tier offering as well. An alleged marketing material of Xiaomi Mi Note 5 has been spotted on Chinese social media, revealing some of the key specs and price. 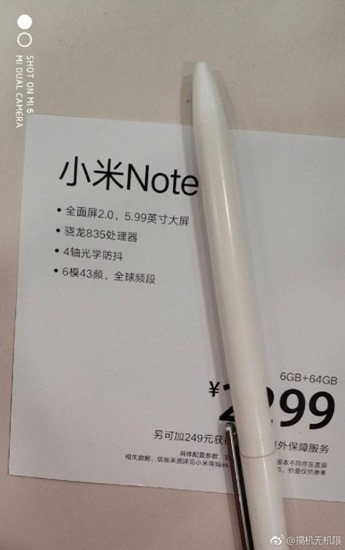 The leaked image from China suggests that the upcoming smartphone will come flaunting 5.99-inch display with Full Screen 2.0 design, which was most recently spotted on Xiaomi Mi Mix 2s. This means we can expect the same three sides bezel-less form factor on the Mi Note 5. Further, the image reveals that the smartphone will be powered by Snapdragon 835 processor backed by 6GB RAM and 64GB storage. The spec sheet also suggests that there will be 4-axis optical stabilisation support onboard for the camera. The smartphone will also offer support for 43 frequency bands across the globe. However, this spec sheet seems to be slightly sketchy so we suggest taking it with a pinch of salt.

While the name of the smartphone is hidden in the new leak, Mi Note 5 was recently spotted on the Eurasian certification website as well. Thus it is safe to assume that the new leak could be of the same handset. The new image also has the price hidden by the pen, but it seems to be RMB 2,299 (~Rs 24,500). However, considering that the Mi Note series hasn’t seen a new launch in a while and the Snapdragon 835 is more than an year old, it’s quite possible that the device may never see the light of the day.