I loathe commencing a review on a bad note but, in case you were wondering, GPU prices are still nowhere close to stabilising. Thankfully, there is a silver lining (of sorts) – the market is ripe with excellent, well-priced gaming laptops that make use of the latest silicon from AMD and Intel and pair it up with Nvidia’s brand-new RTX 30-series cards. Case in point, the ASUS ROG Strix G15 which, for all intents and purposes, is a fantastic gaming machine. I’ve been using the laptop for the better part of two weeks and here’s why I think it could elevate your gaming experience tenfold.

ASUS’ ROG Strix G15 looks the part of a gaming laptop – it’s thick, bulky, ships with a ton of RGB and features gamer-y accents all around its chassis. That said, unlike most gaming laptops, the Strix 15’s decals don’t appear gaudy and even the unit’s RGB layout only adds to the laptop’s aesthetics. Rest assured, while I don’t see many people using the machine in a boardroom setting, the laptop’s good looks will not go unnoticed by PC enthusiasts. 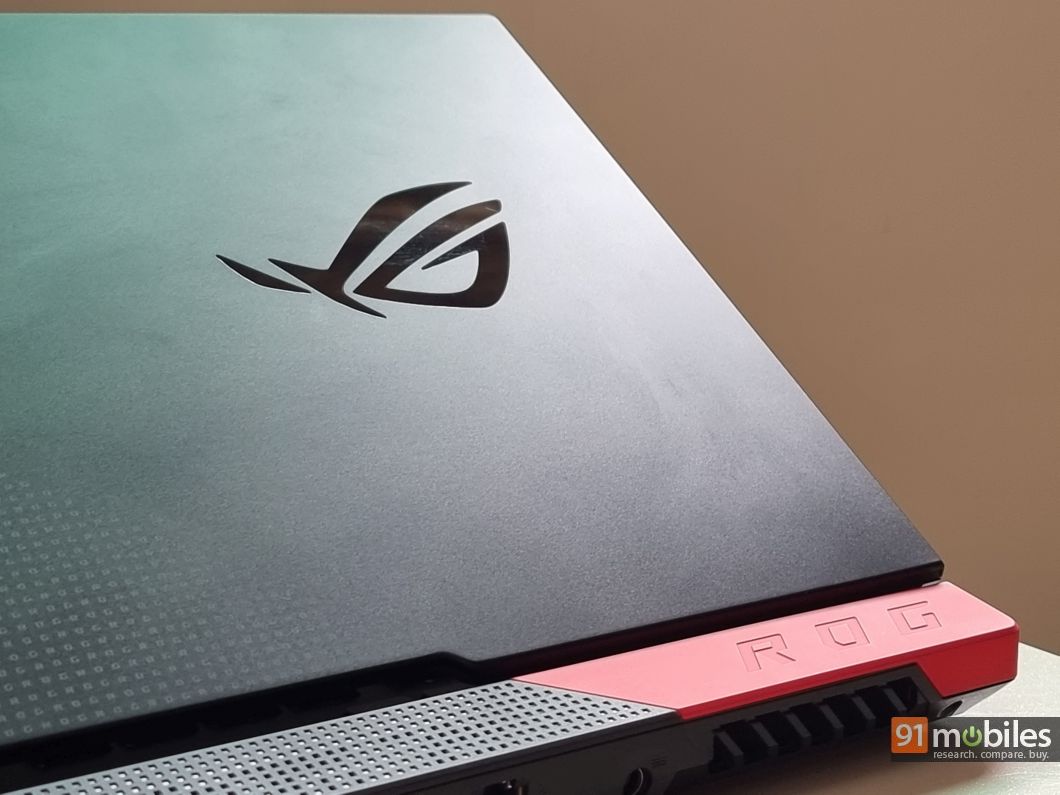 Speaking of which, in traditional Strix fashion, the G15 also ships with an RGB band running across the base of the unit which adds a gorgeous underglow akin to a modded sports car. I suppose the analogy fits, as the Strix 15 is quite fast (and loud). More on that later, though. The device also ships with per-key RGB lighting which you can colour-match with the RGB strip at the bottom or other ASUS peripherals. You should also know that the laptop has been built like a tank and the chassis doesn’t offer any give. 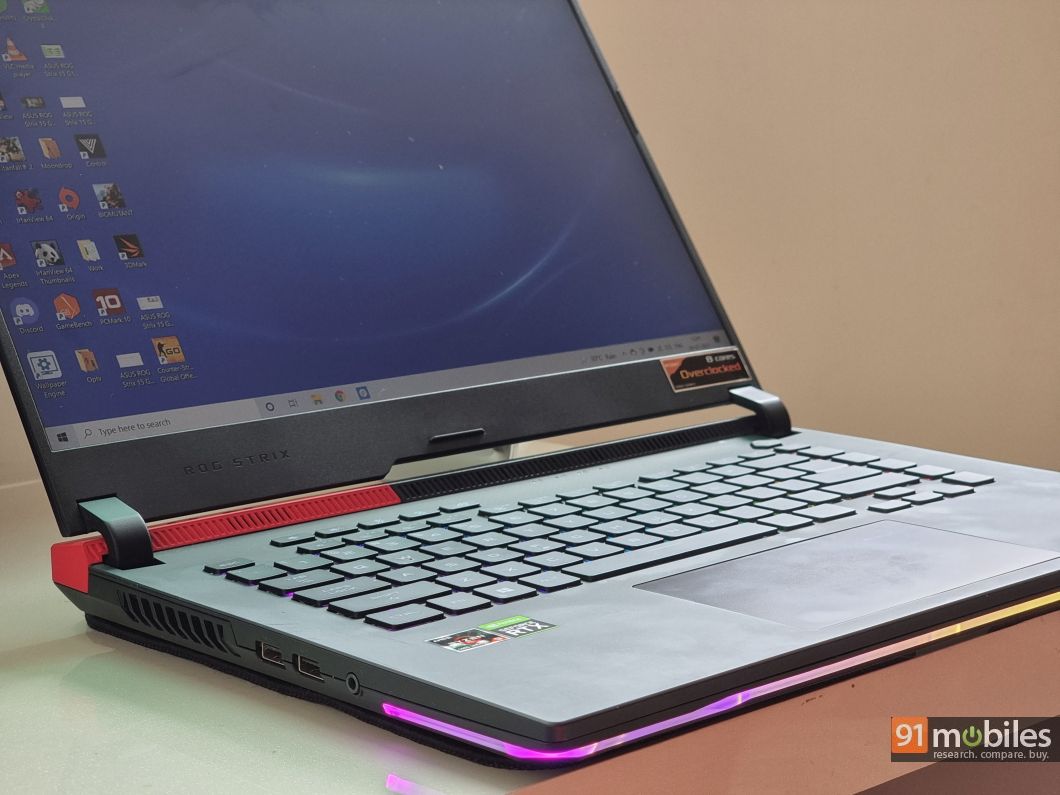 The hinge mechanism offers ample friction too, ensuring the screen doesn’t wobble when the laptop is in use. And, sure enough, you can open the lid with just one hand as well. I’d also like to add that at 2.3kg, the Strix 15 might appear heavy, but, the device is among the lighter gaming laptops in the market. As for the ports, the laptop ships with three USB 3.2 Type-A ports, an RJ45 Ethernet port, a headphone jack, an HDMI 2.0 socket, a barrel-style charging connector, and a USB 3.2 Type-C port which by the way, also doubles up as a DisplayPort and supports USB Power Delivery too. 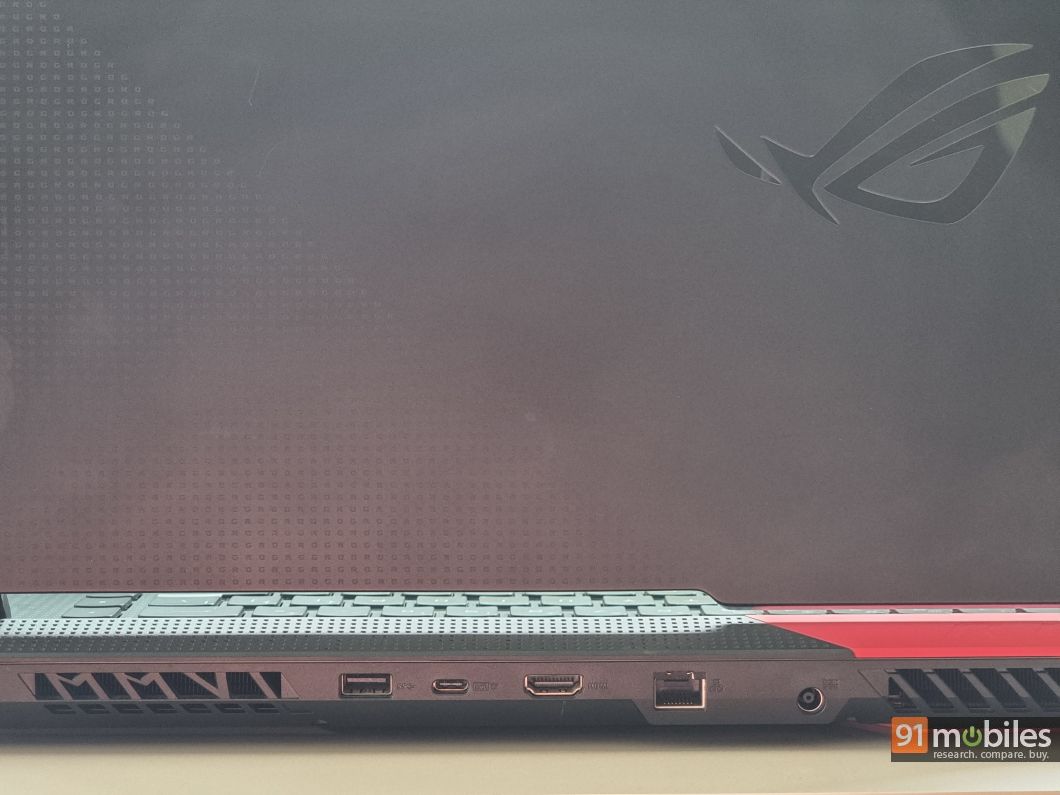 The icing on the cake is that most of the ports have been positioned towards the back of the unit. Consequently, you won’t run into any cable-management hassles with the laptop. Unfortunately, the machine doesn’t ship with a ThunderBolt 4 connector, which is a bummer.

The ASUS ROG Strix G15 ships with a 15.6-inch, Full HD, IPS panel. The display offers 100-percent sRGB coverage and ships with an anti-glare coating on top. Consequently, the panel should stave off any unnecessary glares if you are gaming in a well-lit room. More importantly, the screen offers a blazing fast refresh rate of 300Hz, along with a response time of just 3ms. 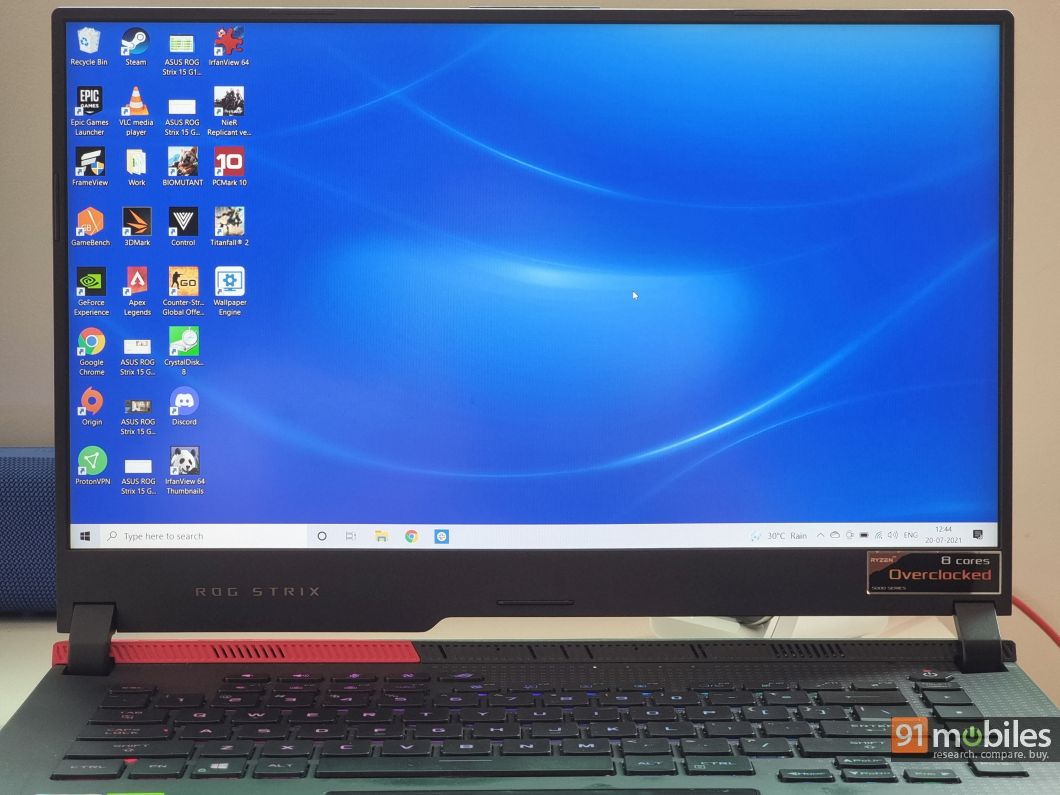 It goes without saying then that the display is a godsend for gamers and content creators. Now, realistically, most games might not push beyond the 300fps mark. However, the display should acclimate well to titles hovering over 100fps too. Not to mention, the UI animations feel buttery smooth on a 300Hz screen. Add to that the display’s razor-thin bezels and the Strix G15 might just have the most complete display on any gaming laptop in the market. On the flip side, the Strix G15 doesn’t ship with a built-in webcam, though the company does bundle one as an accessory with the retail unit of the laptop. 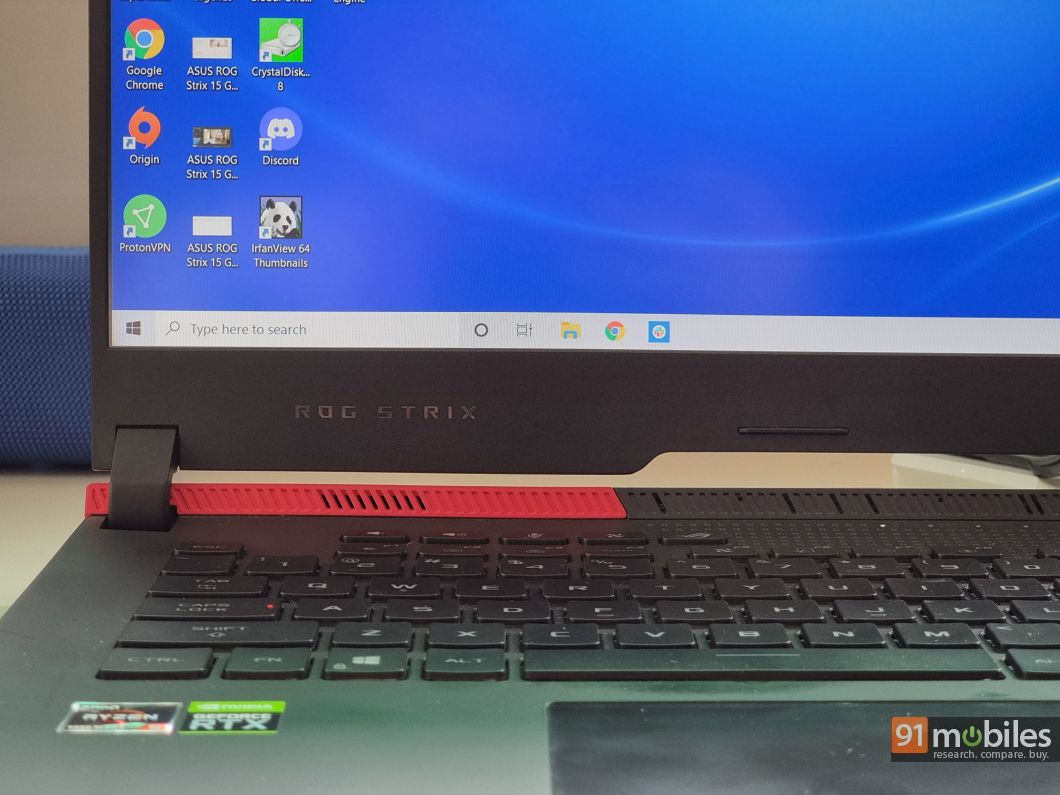 Depending on which side of the fence you’re on, this may or may not be a dealbreaker for you. I for one was more than happy with the bundled webcam. As for audio, the laptop ships with two 4W speakers that get reasonably loud. The pair should suffice for watching a movie on the fly, but you might want to keep your expectations in check.

The ROG Strix G15 makes use of a chiclet-style, backlit keyboard which, as prefaced previously, features per-key RGB lighting as well. You can customise the RGB effects by going into the laptop’s Armoury Crate app and even synchronise the colour profile to match other  ASUS components by using Aura Sync, which can also be accessed via the Armoury Crate app. The keyboard deck is quite spacious and the keys have an adequate separation between them too. 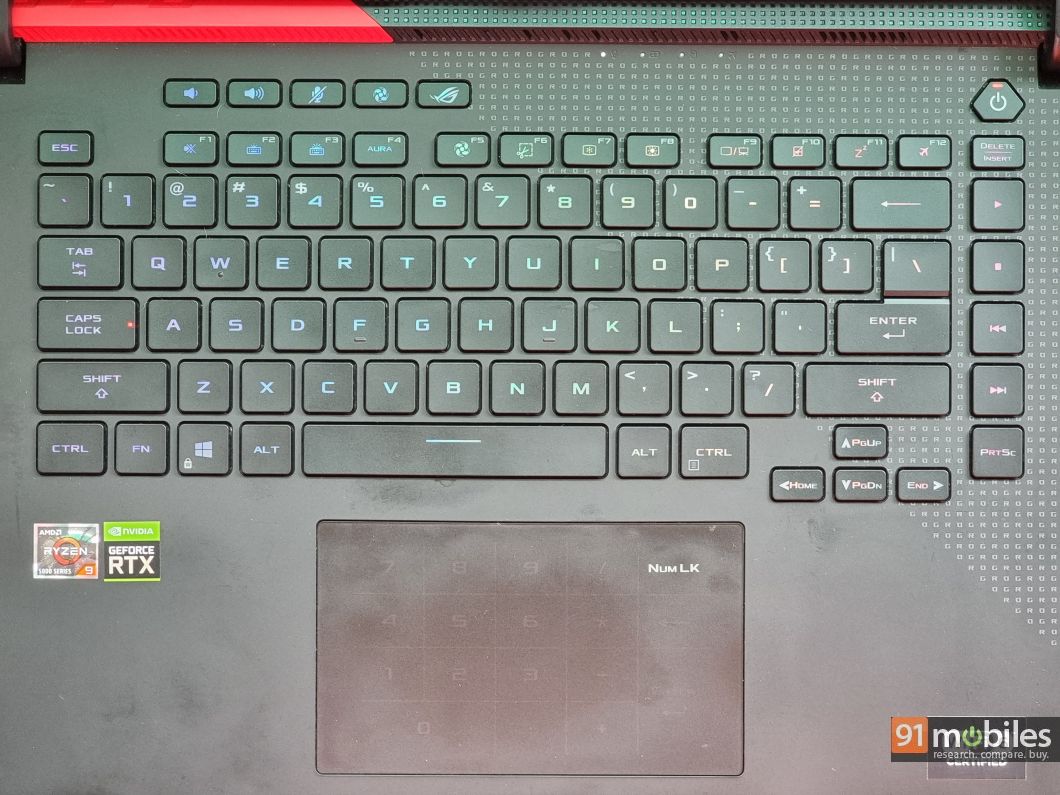 What’s more, I was more than content with the key travel on offer here as well, and at no point did the keys strike me as mushy. The company also offers five hotkeys above the function row that should help you change the audio levels as well as the fan speed on the fly. And, fret not as the palm rest is quite accommodating, so you should have a joyous time gaming or typing on the Strix G15’s keyboard. 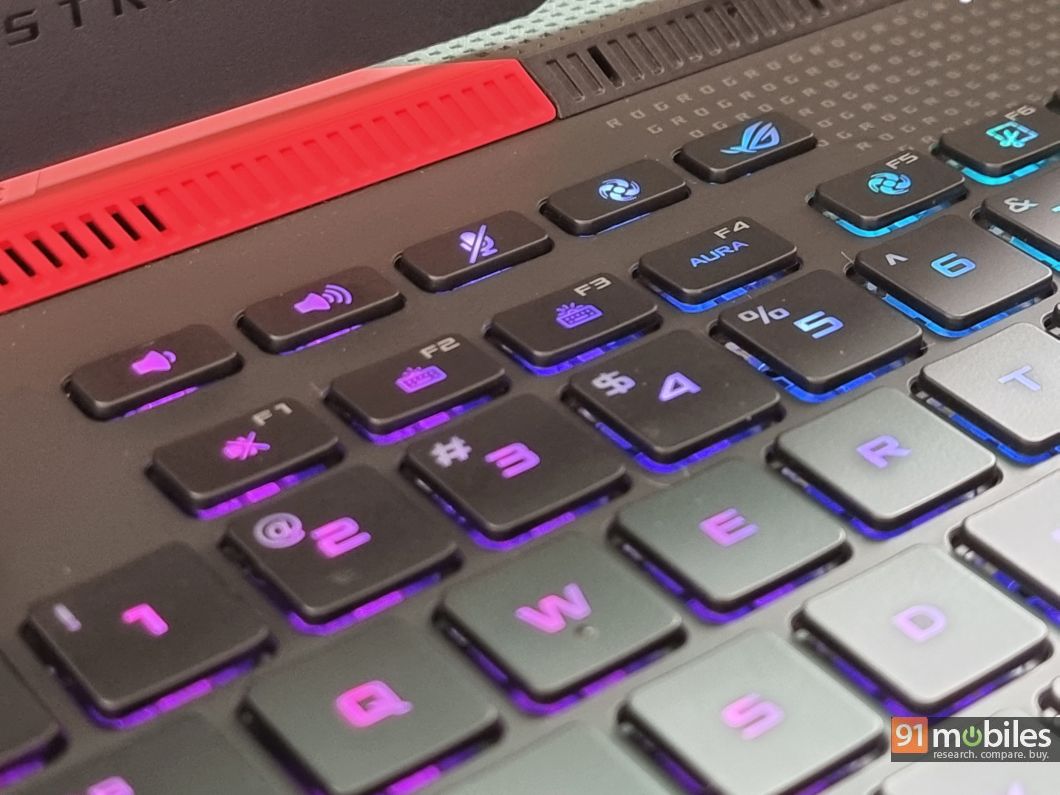 As for the trackpad, the Strix G15 offers a matte glass touchpad that is smooth to the touch and supports Windows Precision Drivers. You’ll also get a capacitive NumPad embedded within the trackpad’s surface which can be enabled with the tap of a button. So if you dabble with a lot of excel sheets, you’ll definitely fancy the laptop’s trackpad.

Coming to the meat of the matter, the ASUS ROG Strix G15 ships with AMD’s Ryzen 5900HX processor. For the uninitiated, the CPU makes use of AMD’s brand-new Zen 3 architecture and promises a 19 percent IPC uplift when compared to the previous generation. In a nutshell, the CPU can, in theory, squeeze out around 19 percent more performance from every MHz of CPU frequency. Factoring in the chipset’s eight cores and sixteen threads, you’re looking at bountiful horsepower under the hood of the new Strix G15. 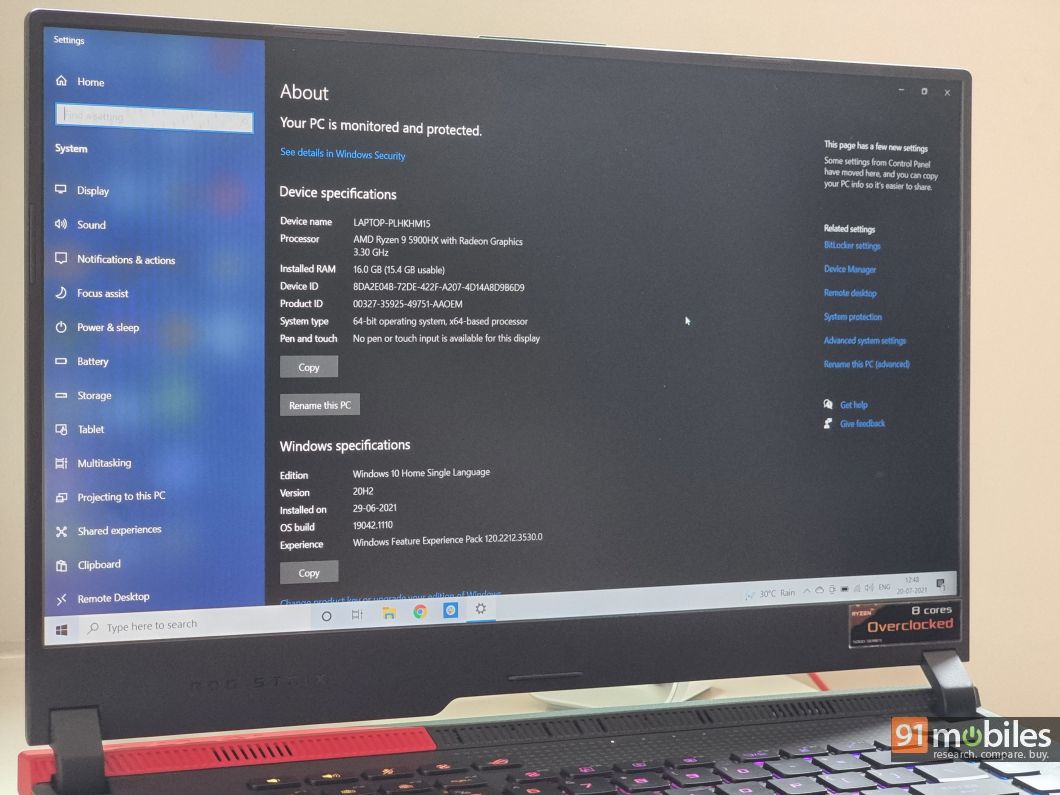 The CPU has been paired with Nvidia’s RTX 3070 GPU with a TGP of 115W. That said, the laptop can provide more power to the GPU (dynamic boost up to 130W) as well. For RAM, the laptop ships with 16GB of DDR4 memory clocked at 3200MHz, with an option to expand the memory up to 32GB. In terms of storage, the device features a 1TB, M.2 NVMe SSD. Clearly, the ROG Strix G15 is quite loaded and therefore, it should come as little surprise that the device can plow through any task you throw at it with ease. I didn’t run into any performance issues whilst using the laptop day in and day out for my office chores. To that note, I always had over a dozen Chrome tabs open, along with social media apps like WhatsApp, Slack, etc running in the background. Rest assured, my workload was barely enough to get the laptop’s cores to turbo, so, let’s take a look at how the laptop fares with more strenuous tasks. Starting off, the ASUS ROG Strix G15 performed admirably in numerous benchmarking applications. In the CineBench R23 multi-core test, the Strix G15 outputted a score of 11,049 points, which is the highest I’ve seen any laptop bench, yet. Turn the page over to PCMark 10 and 3DMark and you’ll get a similar result. With an aggregate score of 6,957 points in the former and 9,617 points in the latter, the Strix G15 is clearly shooting for the moon. I was more than happy with the laptop’s SSD speeds too and the machine boasts sequential read and write speeds of 3,595MB/s and 2953MB/s respectively.

As for gaming, I did run a slurry of games on the laptop, and the machine performed as advertised. To give you a better picture, I could max out all the graphics settings in Apex Legends and despite that, the laptop managed to churn out around 144fps. While the frame rate did dip to 120-130fps at times, I am positive that users can, in fact, net constant 144fps with the machine by dropping a couple of graphics settings. Turn the page over to a more graphically intensive title like Control and here, the laptop managed to output well over 60fps and that’s with all the settings maxed out. What’s more, I even had all the ray tracing presets enabled and set to high and despite that, the laptop showed no signs of slowing down. The same goes for Neir Replicant and Biomutant, two vast open-world titles that ran flawlessly with all the settings maxed out. 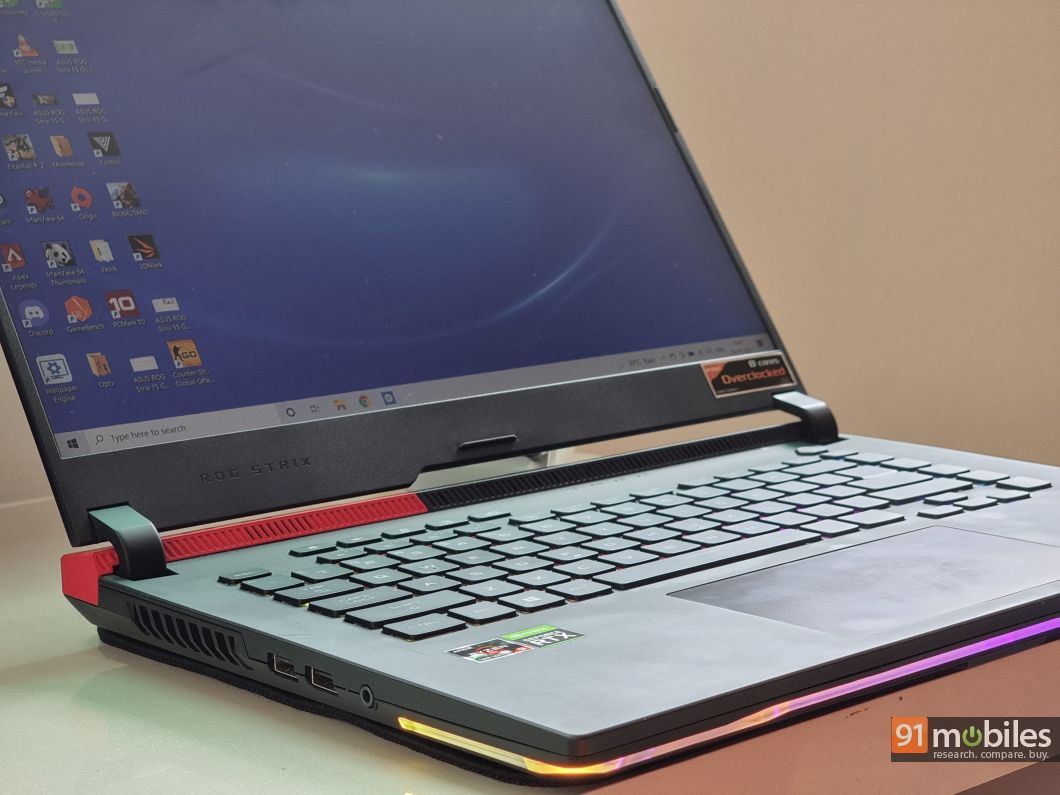 I did map out the CPU’s core speeds and sure enough, the chipset did turbo all the way up to 4.3GHz when I was playing Apex and other games on the machine. Much to my surprise, the laptop didn’t thermal throttle and the CPU, as well as the GPU temperatures, were well within the operating limit. In fact, even after an hour of gaming, the CPU temps didn’t touch the 95-degree mark and the GPU temps were well under the 90-degree mark too. Unsurprisingly, the fans can get quite loud, especially when you have the laptop’s performance set to turbo mode. But, so long as the fans keep the laptop from thermal throttling, I don’t mind the noise all that much. As for the battery life, the Strix G15 managed to last me a little over four hours off a single charge. The laptop’s battery backup is on par with most other gaming machines out there, so no complaints here.

The ASUS Strix G15 retails for Rs 1,57,990 and for the price, gets a lot right. The laptop performs well, offers a fantastic screen, is relatively lightweight, and has been priced competitively too. Rest assured, buyers looking to get into PC gaming should consider picking up the Strix G15 – the laptop will not disappoint you.