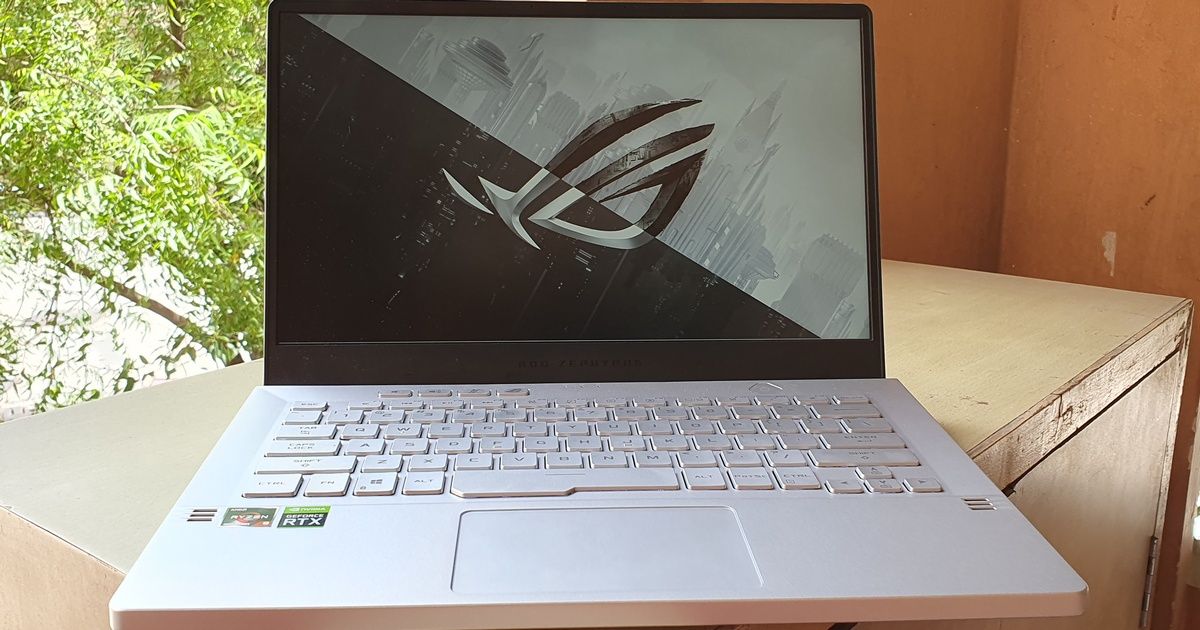 Taiwanese electronics giant ASUS is no stranger to the world of gaming. Whether it is PCs, laptops and smartphones, ASUS just knows what clicks to give the best-in-class performance and has been lauded for the same. The Republic of Gamers (ROG) lineup has been delivering on the demands of gamers for a long time, whether it is the premium Strix series and Zephyrus series or the budget-oriented TUF series. Today the company has announced its latest product called the ROG Zephyrus G14, and the new gaming laptop is quite interesting for a couple of reasons. ASUS has opted for AMD’s new Ryzen 4000-series processors as opposed to Intel’s 10th-gen chipsets. The top-end variant packs in the RTX 2060 GPU implementing a Max-Q design to fit everything inside a remarkably thin chassis. Launched at a price of Rs 80,990 (non-AniMe Matrix) the Zephyrus G14 is certainly worth exploring as an ultra-portable gaming machine that can also be used for professional purposes. Read on to find out more in this detailed review. 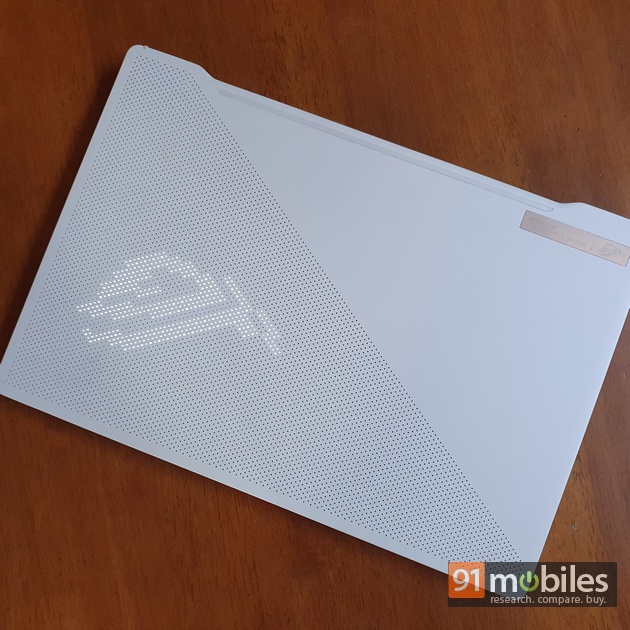 ASUS has once again delivered on a prime gaming experience on a laptop mixed with stellar battery life. The quirky AniMe Matrix design on the lid is fun to play with but in the interest of functionality, there is no real use case for it except for aesthetics. The Zephyrus G14 is extremely portable and light which makes it handy for professional use and AMD’s latest Ryzen 4000-series can give Intel a run for its money.

The very first thing that I noticed while unpacking the Zephyrus G14 is how slim and light the laptop is. This was in stark contrast to the heavy-duty internals that ASUS had packed in the device. There are two colours options which are Moonlight White and Eclipse Grey, and I have received the former. In my opinion, the white colour does make for a unique-looking device especially since it is gaming-centred, but it just as easily is prone to staining. The colour variant is a combination of a silver chassis, keyboard and vents with a clear white lid covered with thousands of small LED lights to give out an aesthetically-pleasing look. The LED lights in question are part of ASUS’ AniMe Matrix design and this is the first time we get to see it. They occupy about half of the lid’s backside in the form of a triangle and light up to display different patterns, images, animations and more. It is a nifty little feature which does make the G14 stand out, but there a non-AniMe Matrix version of the laptop as well. More on that later in the review. 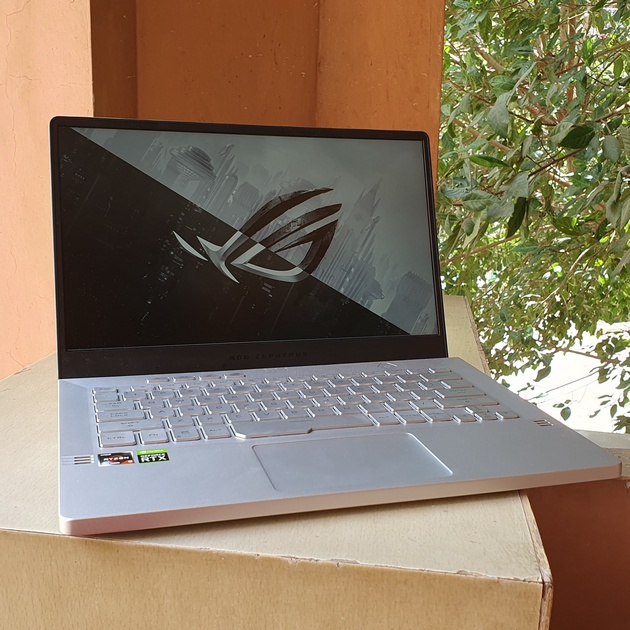 The laptop tips the scales at about 1.7kg (1.6kg for the non-AniMe Matrix version) and has a thickness of 1.79cm which makes it very portable. Asus has also implemented the Ergolift design which is quite prominent in its Vivobook series. The hinge raises the body of the laptop by a certain angle when you open the lid to give a more thermal outflow, an easier typing experience and create a small sound chamber below the machine for better acoustics from the speaker. The magnesium-alloy chassis feels polished and refined with the finish specifically designed to resist fingerprints. 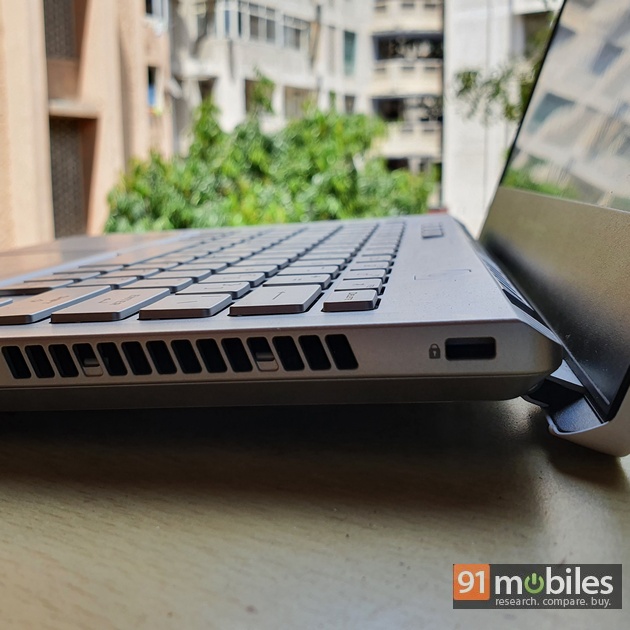 As far as ports go, you get all the major ones. These include the standard 2 X USB 3.2 Type-A ports, 1 X HDMI 2.0 port, 1 X USB 3.2 Type-C, 1 X USB 3.2 Type-C with DisplayPort 1.4 and charging capabilities and 1 X 3.5mm headphone jack. For its price point, I was disappointed not to see either of the Type-C ports supporting Thunderbolt 3.0, although to be fair Intel reserves the right for the certification. Another omission from the G14 is the lack of an integrated webcam which could pose problems to people in this day and age of Zoom calls. 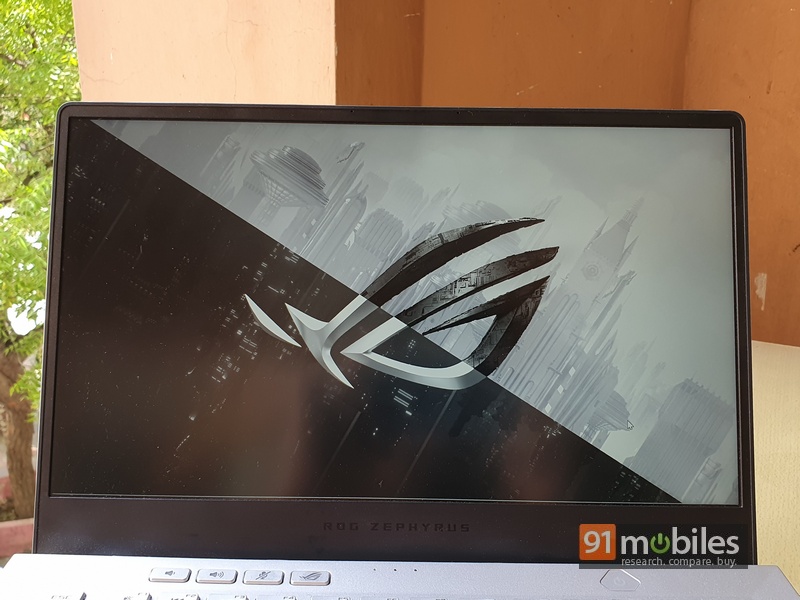 The display happens to be another area that the ROG lineup has excelled time and time again. The G14 has a 14-inch IPS LCD panel with an FHD (1,080 x 1,920) resolution and a 120Hz refresh rate. However, the model they have sent for review purposes has a 1440p WQHD display locked at 60Hz. As a personal preference, I do give more weight to a higher refresh rate display than a higher resolution. Even so, the G14 has one of the better colour calibrated displays in its price segment. It had a healthy 113 percent coverage of the sRGB colour gamut and one of the brightest panels out there. Shades and textures on the walls, while I was decimating a couple of aliens in Destiny 2, were balanced. Colours never looked washed out or too saturated which was easy on the eyes.

While a 14-inch frame can be a bit congested, the Zephyrus G14 manages to pack in a keyboard with good spacing. At first, my fingers took time to adjust to the keys but once I got used to it, the experience was quite delightful. The keys have a good amount of travel and offer a generally good typing experience akin to a full-sized keyboard. There are also separate keys on the top for controlling the volume and opening the ROG Control Panel. 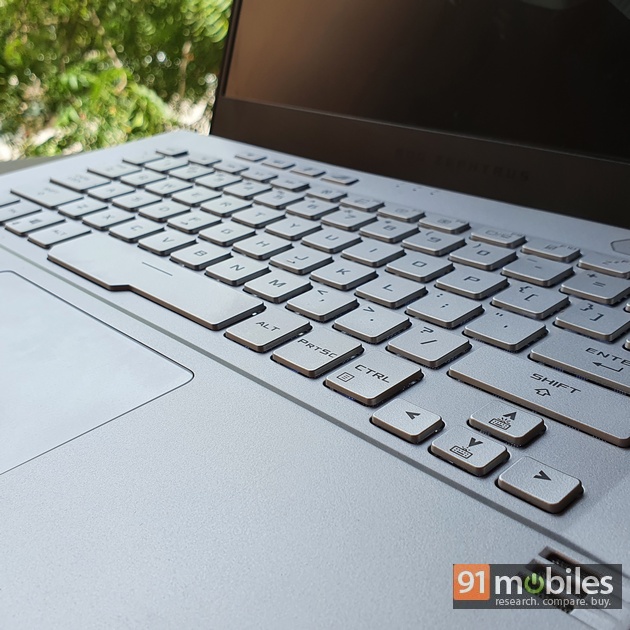 The backlight, however, feels quite poorly implemented. While the light happens to have three levels of brightness, the letters on the keys do not allow sufficient light to pass through. Add to that is the fact that the colour of the letters is very similar to the laptop’s colour which also makes a dent in the ability of the backlight to make the keys more legible. Consequently, sometimes the keys are visible better with the backlighting turned off. Fortunately, my usage has been in well-lit conditions and at night the backlight works well. For authentication the G14 also has a fingerprint sensor as well.

My experience with the trackpad was also quite satisfactory. The surface was smooth and the didn’t require a hard push to press the button. I was pleased with the smooth response to the gestures and accurate detection of left and right clicks. However, this being a gaming laptop, almost anyone purchasing it will also get a good mouse to go along. Even so, for daily usage such as browsing or using Microsoft Office tools, the trackpad is good even if its area is slightly small.

Asus’ ROG line and great performance go hand-in-hand. The decision to opt-out of Intel’s 10th-gen chipsets was a calculated one. AMD had been bragging about bringing its Zen 2 architecture from PCs to a mobile version and the Zephyrus G14 is one of the first to implement it. Powered by the octa-core 4000-series Ryzen 9 4900H with 16 threads, the G14 is one of the most processor-heavy laptops in its price range. Combined with 16GB of DDR4 RAM and 1TB of PCIe SSD, almost no task seems too big for the laptop. In the graphics department the thin chassis packs in an NVIDIA RTX2060 Max-Q GPU with 6GB of VRAM. 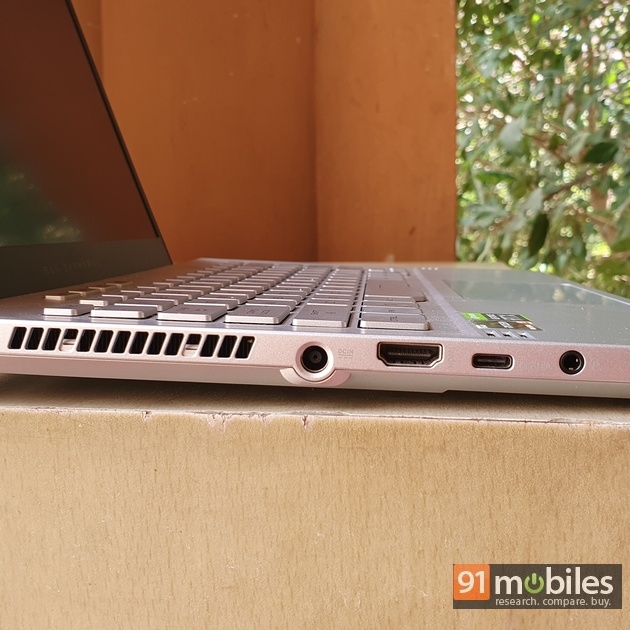 Gaming on the device was a breeze and with the laptop handling even the most intensive titles with ease. I tested out a few very common games to see how well they ran on the device and was quite impressed. Call of Duty: Warzone and APEX Legends, two massively multiplayer and popular FPS titles cranked an impressive 110 fps but that is to be expected since both don’t strain the GPU a lot. More intensive games such as Shadow of the Tomb Raider and Far Cry 5 ran at 54fps and 49fps respectively at the highest settings which I was quite happy to see. Even under a lot of sustained gaming, lasting for about 1-2 hours, the G14 manages to remain cool with temperatures not crossing the 82-degree mark, an impressive feat given the thin design. ASUS has done a very good job of thermal management and the Ergolift hinge adds on to it. 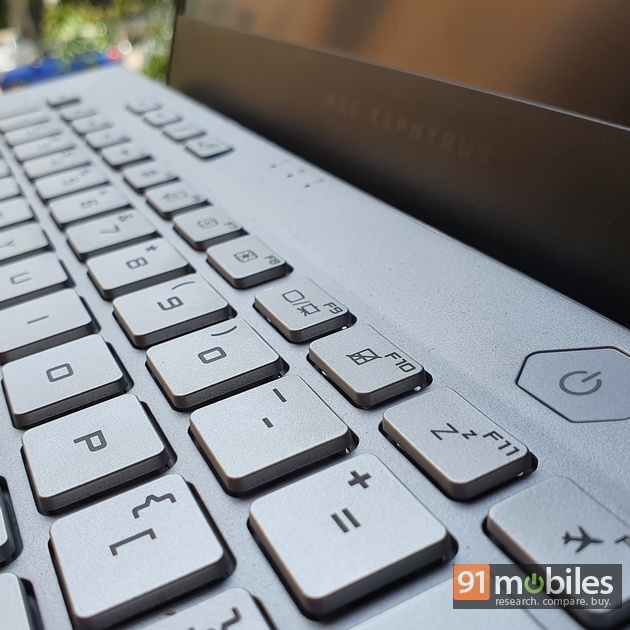 Benchmarks are a quantitative method to judge the performance of a device. To gauge the CPU performance of the device I ran Geekbench 5 and the laptop gave back an impressive multi-core and single-core score of 1134 and 6595. For checking the device’s capabilities under sustained load Cinebench R20 was the testing ground and the device scored a healthy 4085 points. A measure of the device’s graphical capabilities was shown in 3DMark’s Time Spy test 5,659 which is what you can expect from an RTX2060 with the Max-Q architecture. The benchmark for everyday usage on a laptop can be measured through PCMark’s Work Test in which the laptop scores 5,203. All these scores are taken without activating the Turbo mode in ASUS’ Control Center. However, when turning it on the scores increased only marginally but the fans started making a lot of din. I would recommend turning the mode off. The ROG Zephyrus G14 brags of 2.5-watt quad-speakers which offer decent volume and acceptable base. I would’ve prefered the device to be louder but the clarity and depth make up for it. The sound is powered by Dolby Atmos and the app allows for customisations to be made based on what mode you are using the laptop in. The presets include Game, Dynamic, Music and Movie. You can also customise the presets according to your own needs. 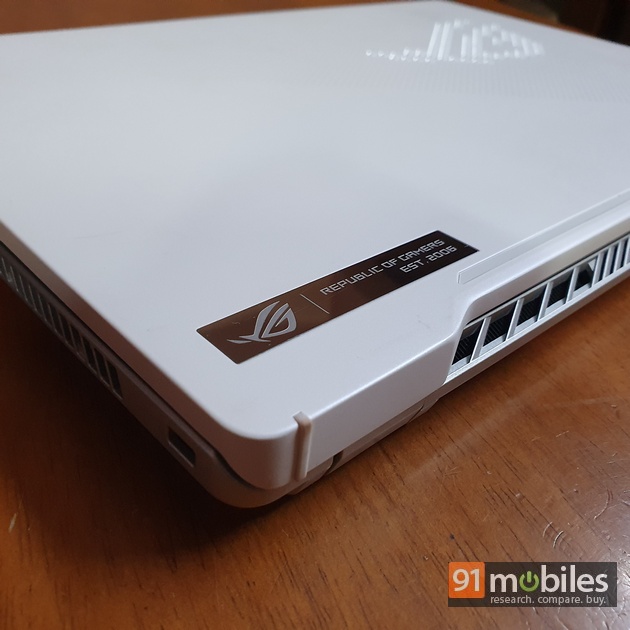 In terms of battery life, Asus claimed that the G14 can last up to 11 hours on a single charge with its  76WHr cell and I had to use it to believe it. I kept the laptop of any power source after charging it to 100 percent and I saw it last up to the whole day with about 30 percent battery left. Usage involved righting this review and also browsing a lot of Netflix for a total screen-on time of nearly 7 hours at 75 percent brightness. For gaming, users are quite likely to only use the laptop when it is hooked on to a power source for the optimum experience. 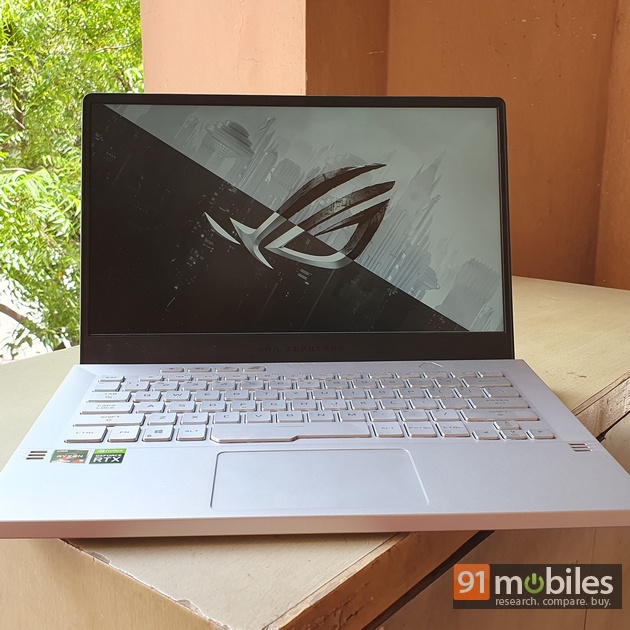 The ROG Zephyrus G14 is undoubtedly one of the finest pieces of machinery for gaming enthusiasts. It is sleek and processor-heavy at the same time, giving great performance and backing it up with best-in-class battery. There are kinks in the laptop’s backlighting but the Zephyrus G14 is still an easy recommendation. There are many configurations that the laptop is available in and my review unit is the specced out version that will set you back Rs 1,61,990. At that price, ASUS and even MSI have a lot of compelling options as well, such as the ROG Strix Scar III or the MSI GP65 with 9th-gen and 10th-gen Intel H-series processors respectively. However, for the starting price of Rs 99,990 for the AniMe Matrix-version, the Zephyrus G14 looks really good against the competition. I would, also recommend the G14 model without AniMe Matrix, which costs Rs 80,990.