“Our two cents on BlackBerry’s latest smartphone, the KEY2 LE”

I was watching Ocean’s 13 recently and there was a line from the movie which struck a chord with me – much like Danny and Rusty, the BlackBerry KEY2 (review) is also an analogue watch in a digital age. While the entire smartphone industry is shifting in favour of all-screen smartphones, BlackBerry is still clinging to the past, and the company’s KEY2 ships with a full-sized QWERTY keyboard and a compact display.

Now, to the company’s credit, the KEY2 isn’t a bad smartphone per se, and it does have a lot of things going for it. However, the smartphone’s stickier price of Rs 42,000 makes it a tough pill to swallow, even for the handful of BlackBerry loyalists out there. Enter the BlackBerry KEY2 LE, a stripped-down version of the KEY2 which offers the same core experience without costing as much. I managed to get my hands on the smartphone and here’s what I make of it.

At first glance, the BlackBerry KEY2 LE looks identical to its pricier sibling, which is a good thing. But, to cut costs, the company has employed a polycarbonate shell to construct the KEY2 LE which doesn’t feel as premium in the hand as the Series-7000 aluminium toting KEY2. On the bright side, the KEY2 LE is considerably lighter and you won’t put a dent on the device if you accidentally drop it. Come to think of it, I doubt anyone will lose their grip on the phone as the polycarbonate finish and the rubberised texture on the smartphone’s back does wonders for the grip.

Other than that, most of the design elements remain the same across the two models and both the devices feature a boxy appearance with sharp edges and flat borders. The convenience key makes a welcome return on the KEY2 LE, which lets users access up to three shortcuts in the blink of an eye. Moreover, despite cutting corners on the quality of the materials, the company has retained the USB Type-C port for fast charging on the KEY2 LE. Additionally, if you were reminiscing about the peppy hues of the BlackBerrys of the past, then you can snag the KEY2 LE in two new vibrant shades of Atomic Red and Champagne Blue. Unfortunately, I was sent the all-black colourway of the device for review, but if you do decide to pick one up, I’ll recommend you opt for the red colour as it looks really cool.

Now, the keyboard on the smartphone remains mostly unchanged, barring one pivotal feature – the KEY2 LE doesn’t ship with a touch-sensitive keyboard and therefore, you won’t be able to scroll through webpages or lists. That’s a huge bummer and it makes using the KEY2 LE all the more difficult with just one hand. Thankfully, the smartphone still comes with the Speed key, which lets you cook up innumerable permutations and combinations for shortcuts and commands on the smartphone.

For instance, if you are hooked to Instagram, then you can press the speed key followed by ‘I’ on the keyboard (doesn’t necessarily have to be ‘I’) to quickly access the app from anywhere in the UI. Furthermore, the fingerprint sensor also makes a comeback, which has been cleverly positioned inside the spacebar key. During my testing, I didn’t come across any issues with the sensor’s accuracy or speed and I was able to unlock the device in a jiffy.

Now, I’ve been using touch-screen smartphones for a hot minute now and therefore, I couldn’t get fully accustomed to a physical keyboard during my time with the device. However, I am confident that with a bit of practice, users will be able to build up their typing speed on the KEY2 LE. I’d also like to point out that the keys on the keyboard have a satisfactory tactile feedback and the layout is quite spacious too. Therefore, you should be able to comfortably type on the device, even if you have pudgy fingers.

As for the display, BlackBerry is using the exact same panel on the KEY2 LE as the KEY2. The display stretches across a 4.5-inch canvas and boasts a resolution of 1,080 x 1,620 pixels. While the panel has excellent viewing angles and exudes vibrant colours, it’s not ideal for media consumption owing to its relatively small size and a unique 3:2 aspect ratio. Therefore, most of the content on applications like YouTube is trimmed to fit the smartphone’s already miniaturised display.

The BlackBerry KEY2 wasn’t a sharp shooter (pun intended) by any stretch of the imagination. Therefore, it comes as no surprise that the KEY2 LE which comes with inferior cameras struggles to capture tasteful images either. On paper, the handset ships with two rear-facing cameras, comprising a pair of 13MP and 5MP sensors with f/2.2 and f/2.4 aperture respectively. For selfies, you’ll be smiling into an 8MP front shooter.

On the face of it, the KEY2 LE shoots decent pictures with vibrant colours and good dynamic range. To me, the smartphone has a great Instagram camera. However, upon zooming in, I noticed that the smartphone struggled to retain details and even at a 20 percent crop, I started noticing grains and noise pop up in the images. That’s quite disappointing as it leaves no room for photographers to pick and choose a part of the image to share. What’s more, the smartphone scrambles to retain details in the shadows too and therefore, any picture I took with the HDR mode enabled felt as if I’d slapped an ND filter on the device. In layman’s terms, shadows appeared darker than they should and the details were absolutely nowhere to be seen.

And it doesn’t end there. The smartphone’s cameras take their sweet time to focus on a subject, especially in situations where you’d want to leverage the portrait mode. Lest I forget, the blur effect isn’t as convincing as what you might get with some other smartphones either. As for lowlight, well, the story remains unchanged. While the images look good on the handset’s display, you’ll notice a ton of smoothening and noise upon zooming in.

Thankfully, there’s light at the end of the tunnel for the KEY2 LE. The selfie camera on the device clicks decent pictures with good details under ideal lighting scenarios. Unfortunately, you won’t be able to click portrait selfies as the smartphone doesn’t support it. However, selfies taken in a pub at night aren’t that bad, thanks to the presence of a screen-flash functionality.

The ‘mini’ or ‘light’ version of a smartphone often comes with less powerful innards and the KEY2 LE is no exception to this. The smartphone is backed by Qualcomm’s Snapdragon 636 processor as opposed to the Snapdragon 660 chip which powered the KEY2. Moreover, BlackBerry has taken a chunk from the KEY2 LE’s memory too, as the device comes with just 4GB of RAM (vs 6GB on the pricier sibling). Consequently, the KEY2 LE isn’t going to set the benchmarks on fire with its performance, but that’s okay because the handset wasn’t intended to run PUBG on the highest possible settings in the first place. You should’ve bought the OnePlus 6 (review) for that.

For the most part, buyers who opt for the KEY2 LE will use the phone to send e-mails, browse the web and for messaging. To that extent, the smartphone is more than capable of handling its own and I didn’t come across any lags or stutters whilst navigating through the system UI. Opening CPU intensive apps which require a lot of resources do take a while (Snapchat and Chrome), but the wait is most definitively not going to kill you. Now, if you absolutely must, then you can play games on the device too. Unfortunately, most games might not play well with the handset’s unique aspect ratio. For instance, I couldn’t get past the loading screen on titles like PUBG and Dead Trigger 2, though casual games like Clash Royale worked just fine on the device.

As for software, the smartphone runs Android Oreo v8.1 with a proprietary skin on top. The software experience is identical to what you would get with the KEY2 and therefore, I won’t go into too much depth here. That said, the skin comes bundled with some excellent features which deserve a special mention. For starters, I was a fan of BlackBerry’s pop-up widgets, which allow users to quickly launch a widget of a compatible application by swiping up on the app’s icon.

I loved the BlackBerry Hub feature too and it’s every bit as awesome as people would tell you. The hub aggregates messages from all the different applications in one place, thereby saving you the trouble of having to jump from one app to the other. Lastly, if you’re paranoid about your privacy, then you will be able to keep your anxiety at bay with the DTEK app, which lets you turn off select permissions for individual applications installed on your device. Then, there’s the Privacy Shade feature which ensures only a part of the screen is visible, thereby allowing users to view sensitive documents and media in public places. All in all, the software onboard the BlackBerry KEY2 LE lives up to its promises and offers buyers a near-stock experience with oodles of security.

The BlackBerry KEY2 LE is equipped with a 3,000mAh battery which easily lasted me a day on heavy usage. Be it the low-res panel or the battery-efficient processor, I was consistently getting over 4.5 hours of screen on time with the device, which is excellent.

Despite everything, I feel that the BlackBerry KEY2 LE is a solid smartphone albeit, caters to a niche group of users. Now, if you like playing intensive games like PUBG, then you’ll be better off with smartphones like the OnePlus 6 or the ASUS Zenfone 5Z (review). If you’re an avid photographer looking for a cost-effective smartphone with excellent cameras, then the Xiaomi Mi A2 (review) would be better suited to you. 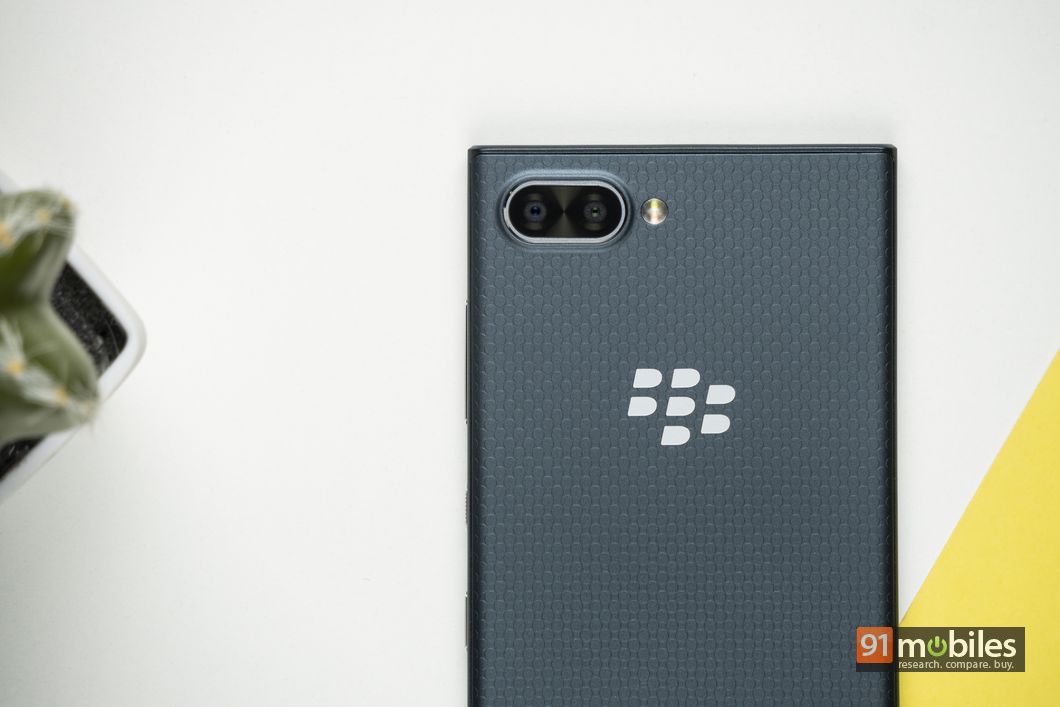 However, if you want a device with top-notch security features akin to an impenetrable fortress, long-lasting battery life, and a physical keyboard, then the KEY2 LE might be it. That is, if you cannot afford the BlackBerry KEY2.