Due to the fact that GPU prices are still in limbo, it makes sense to buy a gaming laptop instead of building a new desktop. This holds true even more for someone who wants a PC that is not overly expensive but good enough for some casual gaming. Among the many sub-Rs 1 lakh gaming laptops out there, Dell offers the G15 Ryzen Edition, which is definitely worth looking into. Competing with the likes of the Acer, ASUS, and HP, the G15 is available with AMD’s Ryzen 5 5600H CPU. It is also available with the more powerful Ryzen 7 5800H at an additional cost. 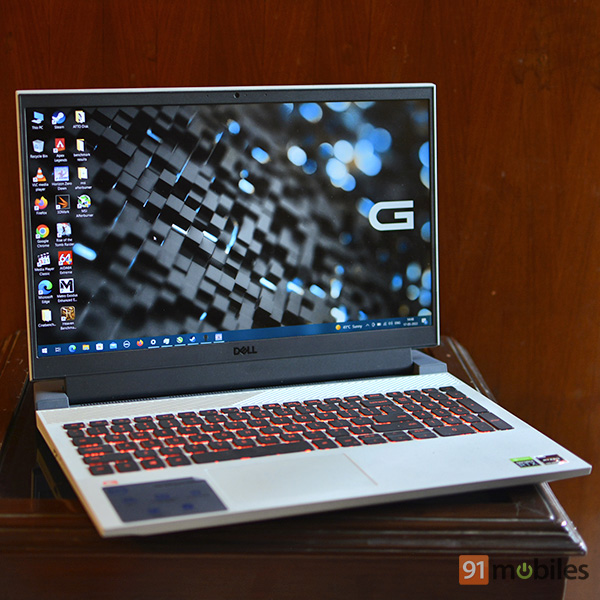 I got a chance to check out the laptop for a couple of weeks and here’s what I think about it.

Like most gaming laptops in its price range, the entire chassis of the G15 Ryzen Edition is made out of plastic, but that doesn’t take away the fact that it is well-built. There is a lot of attention to detail and the product feels refined with no harsh edges or any visible imperfections. It almost feels like Dell took some design ideas from its older Alienware laptops. There is a slight flex to the lid, but overall I was pretty satisfied with the construction and build quality.

The bottom half and the lid have a light grey finish that is covered with specks, giving it almost a natural stone finish. Dell calls it ‘Phantom Grey with speckles’ and while it looks quite unique, I can see why some consumers might not like it, as one can mistake the specks for dust. The hinge is surrounded by a dark grey panel around the back and to add some character, there are a couple of bright orange ‘G’ logos near the right air vent and the keyboard deck. Even the key legends and the keyboard backlighting is orange, which looks nice. In terms of size and weight, this one is a chonker at 26.9mm thickness and 2.44kg. 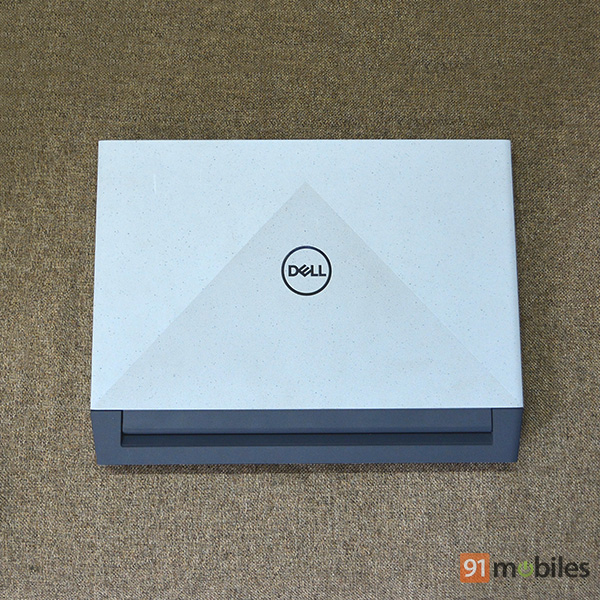 Besides the cutouts at the bottom of the laptop for ventilation, the area above the keyboard also has some slits so that fresh air can cool the internals. The exhaust vents are on either side and at the back, while the bottom-firing speakers are closer to the front.

As for the ports, there is an ethernet jack and a headphone combo on the left side and two USB 2.0 Type-A ports on the right. It is important to note that while Dell’s official website mentions the two USB ports on the right are USB 3.2, that is not the case if you are going for this particular model. Only the higher-specced model of the laptop with Ryzen 7 5800H gets the fast side USB ports. 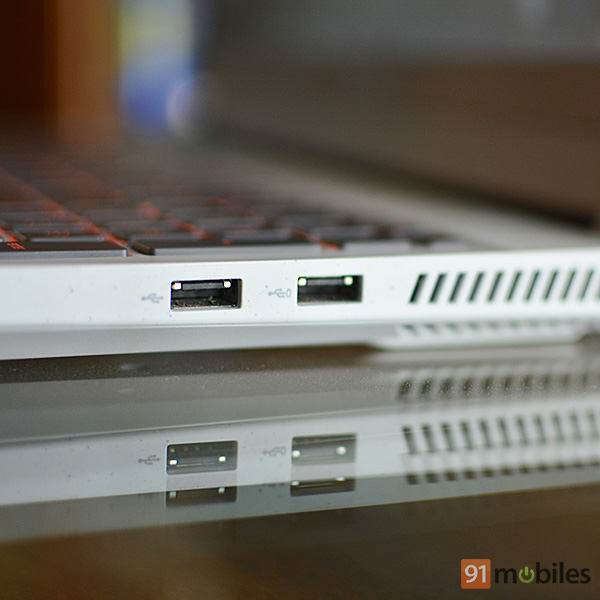 There are also some ports on the rear including a round barrel charging port, an HDMI port, a USB 3.2 Gen 2 Type-C with Display Port support, and a USB 3.2 Gen 1 Type-A port. It is also worth mentioning that the Display Port functionality via the USB Type-C port is limited to the internal AMD Radeon graphics, and not the dedicated Nvidia RTX 3050. As for wireless connectivity, you get Wi-Fi 6 and Bluetooth 5.0 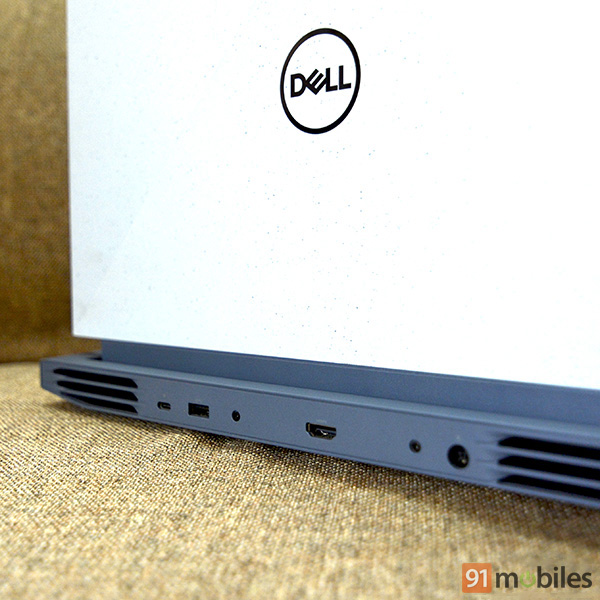 Overall, the laptop is very well built and I appreciate Dell trying to offer a unique styling. In my two weeks of testing, it never felt cheap to me.

This is where Dell has cut some corners. The 15.6-inch 1080p WVA LCD panel offers 120Hz refresh rate and 250-nits of brightness. The contrast looks pretty decent and while the colours aren’t super punchy, my main concern was the overall brightness. It isn’t adequately bright which was visible while playing games and videos. The 120Hz refresh rate of this panel is apt for a gaming laptop at this price range, and while you can expect a smooth experience there is visible blur while gaming. 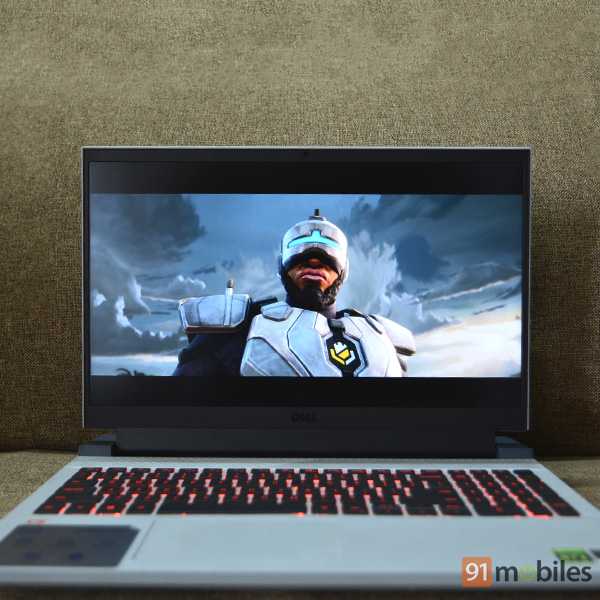 This is primarily due to the response time of the panel. As per some of the tests I did, the MPRT or Motion Picture Response Time of the panel is 7.6ms (lower the better) which isn’t bad but there is visible ghosting. In short, while this panel can deliver 120fps, you might notice occasional blurring especially if you love playing competitive titles. As for colour reproduction, it is just average with up to 45-percent NTSC and about 65-percent of sRGB coverage. Thus it isn’t recommended for creative tasks like photo or video editing.

Now Dell does offer a superior panel option that offers a similar 1080p resolution but with 165Hz refresh rate and 300-nits brightness. But that is only available with the more expensive variant that comes with the AMD Ryzen 7 5800H and Nvidia RTX 3060 combo.

Dell has added a full-sized keyboard to the G15, including a number pad and some extra set of keys that you might need for day to day operations. As mentioned before, the key legends and the backlight are in orange with sharp lettering and two levels of backlight brightness. The keys themselves offer nice feedback and fairly good travel distance while there is good distance between them so you can expect a solid typing experience. The only gripe I have is the small set of arrow keys. Moving to the trackpad, it is on the smaller side but offers a nice smooth finish. I could easily glide my fingers around, while the left and right clicks at the bottom also seemed quite tactile and responsive. The touchpad also supports multi-touch and Windows gestures by default.

The notebook comes preloaded with Windows 10 Home which can be updated to Windows 11 free of cost. There is also a lot of bloatware like most Dell machines including the Dell Customer Connect, Dell Digital Delivery, Dell Mobile Connect, My Dell, Dropbox, McAfee anti-virus and the Alienware Command Center. In my opinion, all of these are pointless, take up unnecessary space on the laptop and should be optional. But, it is what it is. While most of the Dell software is for service, driver updates and system information, the Alienware Command Center seems like the most useful tool, except it isn’t. While most of the time it kept asking me to download more pieces of software, it would always struggle to show the correct temperatures and fan speeds. It does offer other settings like audio control with various profiles, power management, and organising your game library, but at the end of the day, I didn’t find it useful.


Moving onto the performance. The AMD Ryzen 5000 series has been pretty impressive on both desktop and mobile platforms. The unit that I got was running on the Ryzen 5 5600H which is a six-core 12-thread processor, with 16GB of dual-channel DDR4 memory clocked at 3200MHz. The Ryzen 5600H comes with built-in AMD Radeon graphics while the Nvidia GeForce RTX 3050 (80W) kicks in for all the heavy lifting. For storage, there is a 512GB M.2 NVMe PCIe Gen 3.0 drive by default with the option of adding a new one thanks to the secondary M.2 slot.

Now it can be argued that the RTX 3050 is a spruced-up GTX 1660, and while that is mostly true, it is pretty solid for gaming at 1080p resolution. It additionally supports basic ray tracing and DLSS, although the performance is quite mediocre. Most AAA titles that I tried could easily run over 60fps at medium or high settings, while pushing them to ultra settings would drop the frames down at an average of 40. This isn’t all that bad for a gaming notebook that costs less than Rs 80,000. A performance mode can also be activated by hitting the special ‘G’ key (F9) that cranks up the clock speeds and the fans to deliver the best performance. Also, there is a MUX switch that allows you to fully switch off the integrated graphics so that the system only relies on the Nvidia GPU. This helps in giving a slight boost in performance, especially while gaming. Sadly you can only access the MUX switch setting by heading into the BIOS.

If you are interested in benchmark testing, check out the table below. I have also added a graph for some of the games that I tested on this laptop at various graphics settings. The thermals are actually pretty good on the machine. Stressing the CPU with benchmarks, I did see it peak at 98-degrees. However, during gaming, the CPU temperatures tend to stay around the 86-degrees mark with occasional jumps to 90-degrees. All the testing was done at ambient room temperatures of 26-27 degrees and with the laptop’s high-performance mode enabled.

The bottom-firing speakers offer clear sound with a tiny bit of bass. They aren’t impressive, just about average, but should be good for occasionally watching movies and videos at home. The built-in 720p webcam is sub-par and the performance is pretty much the same as you would find on any cheap laptop. Of course, you can still do video calls and conferences, and even live streaming provided you have a solid lighting setup.

The battery on the Dell G15 is rated at 56Whr which is quite low considering the higher-tier variant offers a larger 86Whr unit. I was able to get slightly over 3 hours of battery life while doing basic tasks including browsing the web, checking emails, writing articles and a bit of video streaming. Essentially, it isn’t the best when it comes to battery backup. Even if you go for the more expensive model that offers a bigger battery unit, I am not very confident about how much more juice you can get as it comes with resource-hungry components as well as a more demanding display. 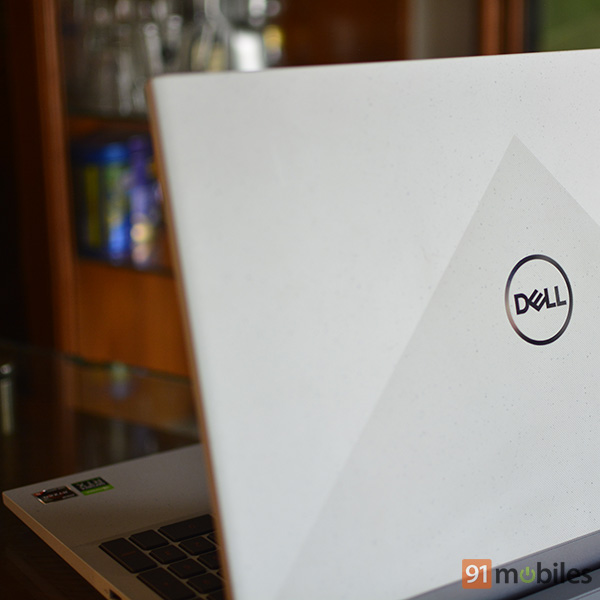 For its price, the Dell G15 Ryzen Edition is actually not bad. I would recommend going for at least 16GB of dual-channel memory if you care about rock steady performance. Not only will it help in gaming, it will also be great for web browsing if you happen to be someone who has to deal with a lot of Chrome tabs.

For consumers who are looking for something that isn’t too expensive, but powerful enough to handle everyday tasks as well as most gaming titles with ease, the Dell G15 Ryzen Edition is not going to disappoint. The AMD Ryzen 5600H is a pretty capable chipset and can deliver great raw performance and it pairs well with the RTX 3050 GPU.

There are a few concerns that you need to consider. Firstly, it isn’t great for portability as it is quite chunky, at the same time, the battery life is not impressive. Hence, this notebook is great for someone who needs a desktop replacement. In fact, I would definitely suggest hooking it to an external monitor with a good mouse and keyboard combo. The display is also somewhat of a compromise, but at least Dell offers the option of upgrading to a better panel.

It’s a good budget gaming notebook, but clearly not the best. There are quite a few options that you should also consider including the Lenovo Ideapad Gaming 3, Acer Nitro 5 and the HP Victus 16. Alternatively, you should also check out our list of the best gaming laptops for 2022.