Google’s WearOS platform has been the backbone of countless smartwatches launched over the years. However, despite the company’s efforts to maximize the WearOS user base, the tech giant is still playing second fiddle to the likes of Apple in the wearables segment. Well, at the beginning of the year, Google acquired Fitbit in a bid to stay relevant in the rat race – after all, Fitbit has for years, churned out quality wearables and the brand is quite popular amongst fitness enthusiasts. To that note, the company recently announced its latest fitness tracker, the Charge 5 in India which brings a wealth of improvements over its predecessors, most notably a touch-screen OLED colour display as well as built-in GPS. But is that enough to warrant a price of Rs 14,999? Well, that’s what we’re here to find out.

Fitbit trackers usually opt for form over function, but the company’s latest Charge 5 cuts a handsome package. For one, the Charge 5 makes use of an aluminium casing as opposed to its predecessor’s plastic housing. The use of metal instantly adds an air of premiumness to the fitness tracker and the device’s design is further accentuated by the choice of tastefully hand-picked colours. You see,  the Charge 5 appears quite lively, which can be accredited to the tracker’s vibrant straps and its dual-tone wrapping. What’s more, depending on the colour you opt for, you will be greeted with a different dual-tone finish on your model. 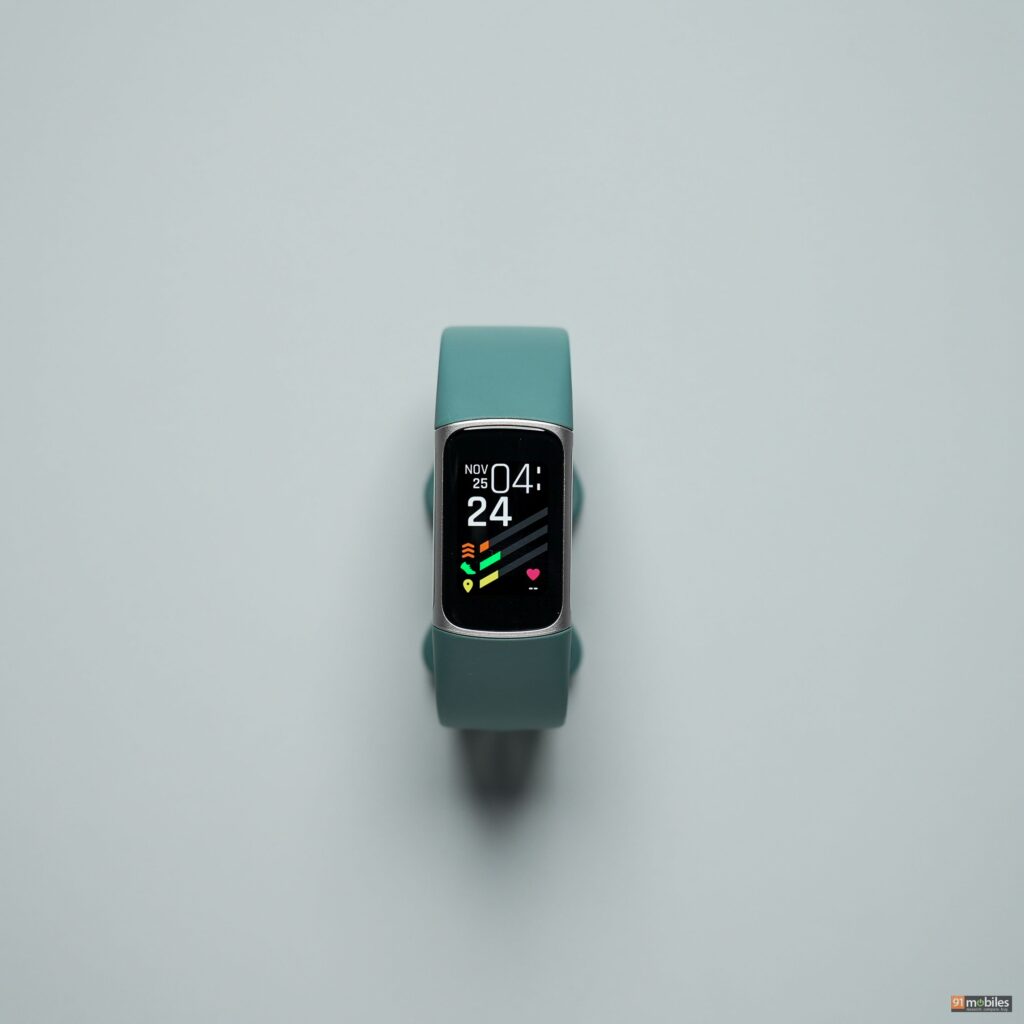 You can even mix and match different coloured straps to give your Charge 5 a truly unique look. Speaking of which, you can easily undo the straps of your Charge 5 by nudging the clasp towards the back of the tracker. In doing so, the strap automatically comes off, which is neat. Moving on, keeping in line with its up-market aesthetics, the company has managed to reduce its latest offering’s footprint too, and consequently, buyers opting for the Charge 5 will be greeted with a more slender and sleek fitness tracker. 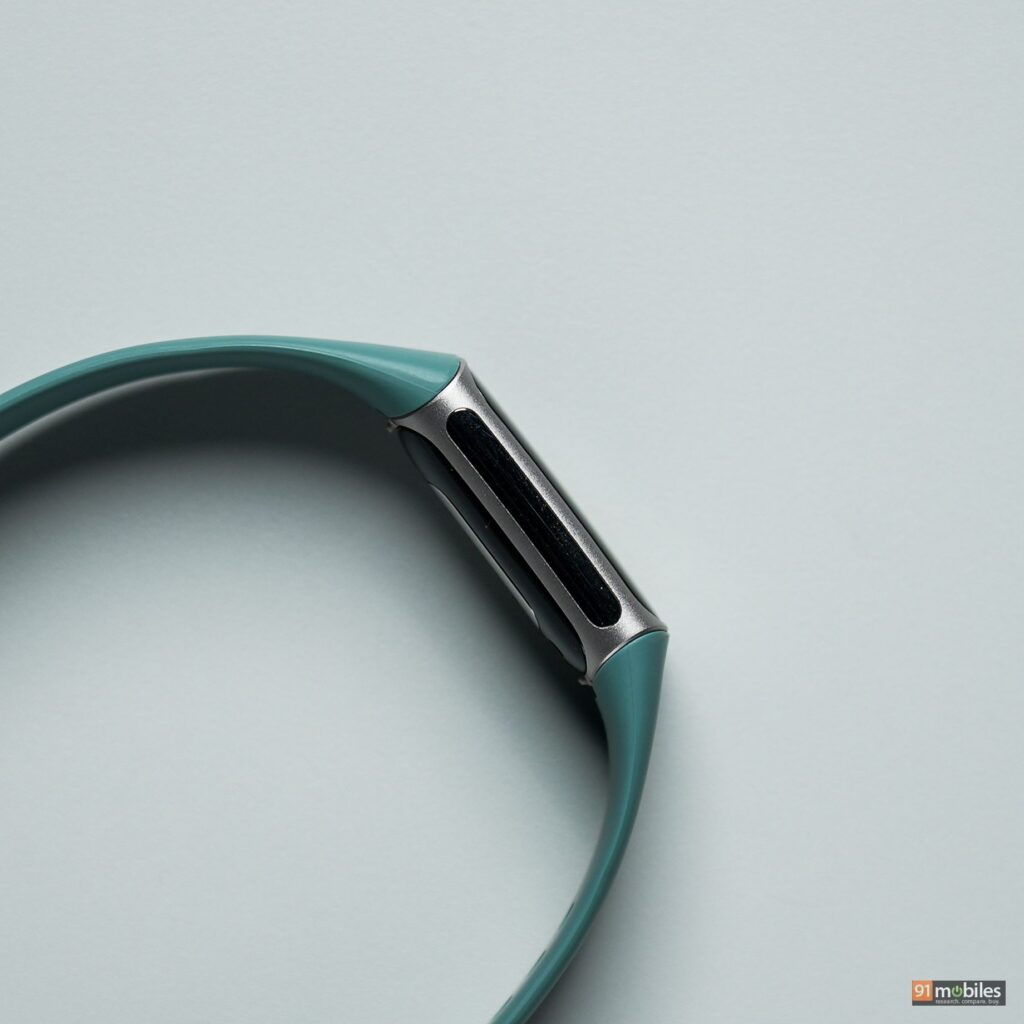 Moreover, Fitbit has introduced Electrodermal Activity sensors on either side of the frame, which help detect stress by measuring the conductivity produced in sweat glands. The tracker is also water-resistant up to 50 meters and on the whole, offers an all-day wear design that doesn’t cause any wear fatigue. 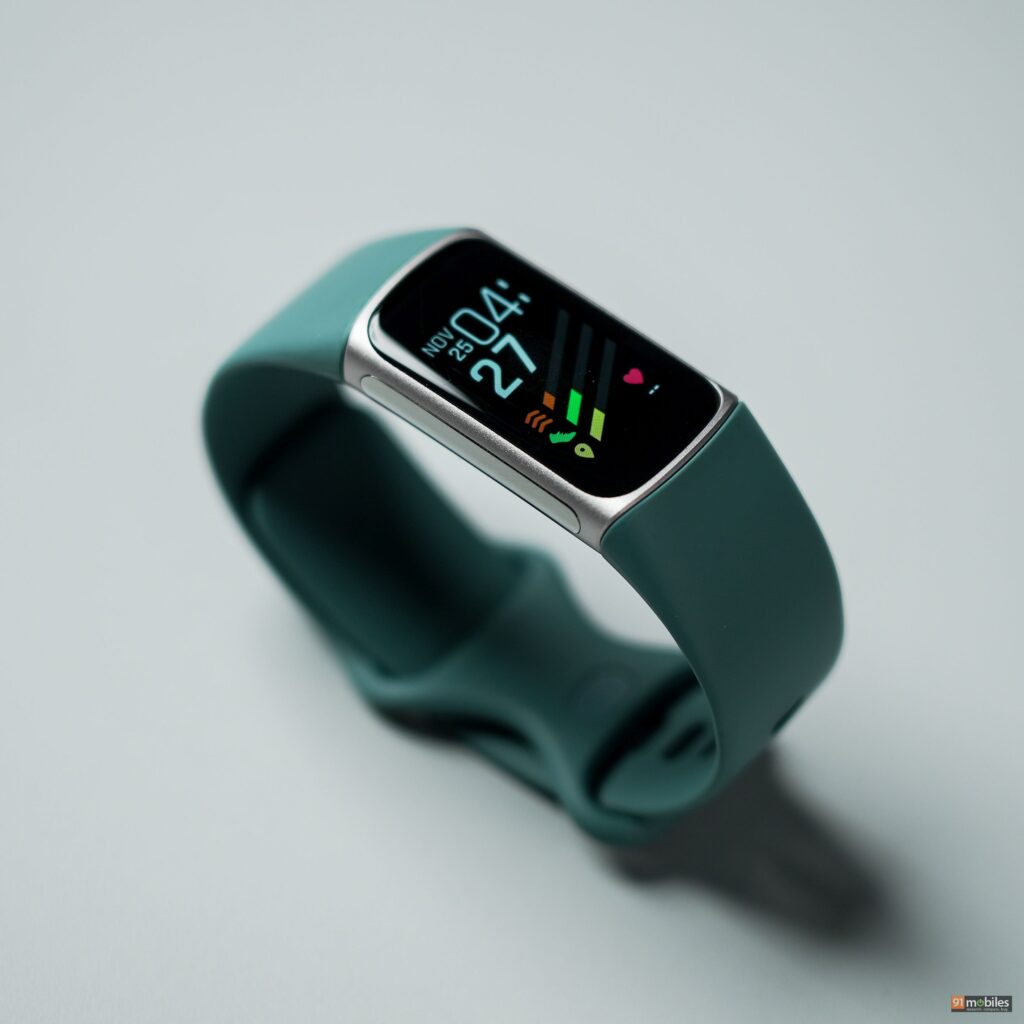 While all that’s good and dandy, the Fitbit Charge 5 doesn’t ship with any physical buttons. Consequently, you will have to use the tracker’s tiny display to navigate around the UI which could be an issue for anyone with pudgy fingers. For one, the display’s touch responsiveness leaves a little to be desired. Furthermore, the UI could involve a learning curve and unlike most, if not all fitness trackers, swiping from the top to the bottom doesn’t bring up the notifications pane. Instead, you’ll have to swipe to the right to see your recent notifications. That’s not all as you’ll also have to tap the display to wake the screen which is quite exacting, especially if you’ve been working up a sweat in the gym. On the bright side, the display is backed by OLED smarts and is a treat to look at. Furthermore, at 1.04-inches, the panel can accommodate a good amount of text in the frame too, so you should at least get the gist of a long message or an email. I was quite happy with the viewing angles on offer as well, and the screen gets satisfactorily bright too. Add to that Fitbit’s colourful watch faces and you’ll want to interact with the panel that much more. Speaking of which, Fitbit has bundled a handful of watch faces with the Charge 5. While I like the design ethos behind most, if not all of the clock faces, they leave something to be desired in terms of customisation. Don’t get me wrong, you can tweak some aspects of a clock face like the fitness metric that is being displayed. However, if you were looking to change the colours or reposition the elements in the frame, then you’re out of luck.

Fitbit bundles a host of utilities with its wearables and the Charge 5 is no exception to the rule. The Charge 5 can help you assess your stress levels, get an ECG reading to give you insights on atrial fibrillation (if any), get a read on your heart rate variability, churn out SpO2 readings, and the works. In fact, the Charge 5 is among the very few wearables that offer the ECG function, and the most affordable one at that. What’s more, the device can also help you assess your sleep patterns and even gives a slew of useful insights on fitness activities like running, swimming, etc. 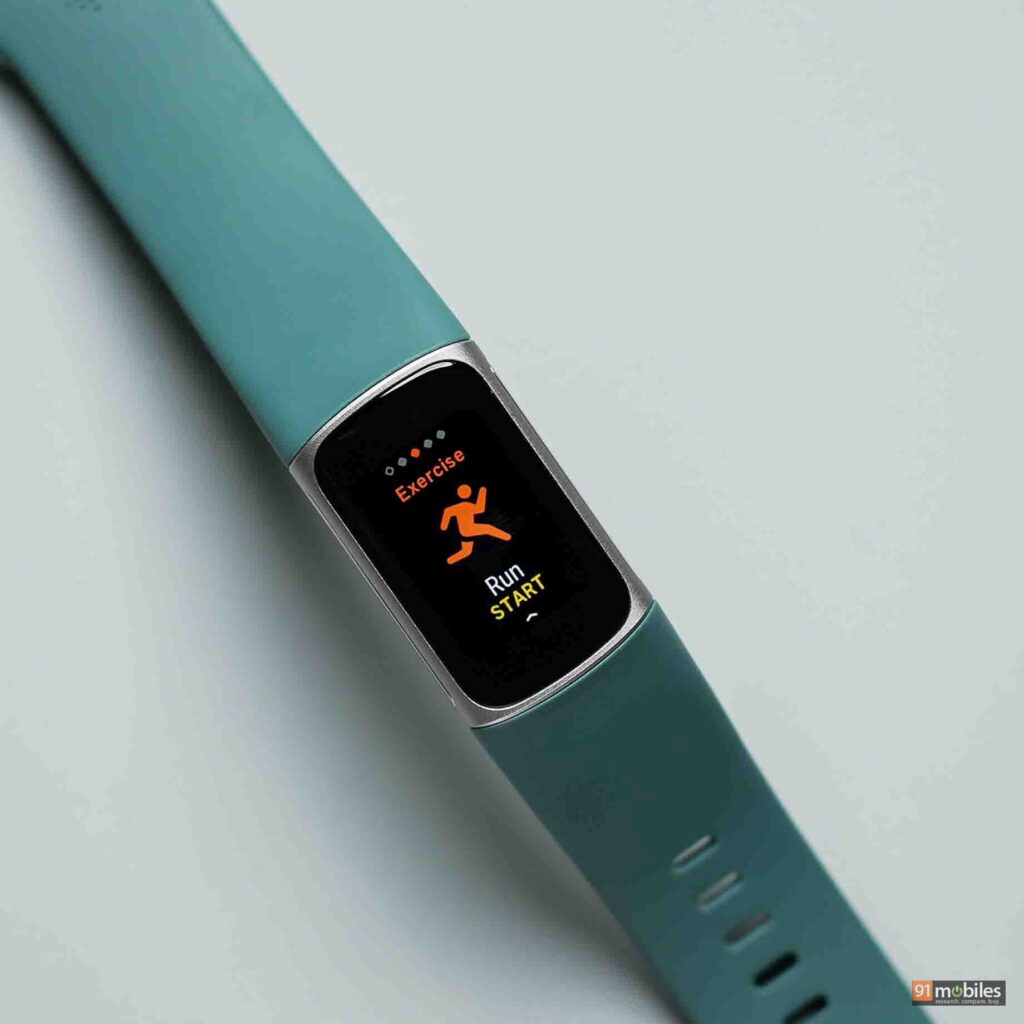 Unsurprisingly, I had no qualms with the Charge 5 as far as fitness tracking is concerned. The tracker was quick to lock on to the GPS signal when I was starting a run, and the unit’s step tracking was within the margin of error too. That being said, I noticed that the device would, at times, add ghost steps to my daily step count tally. In fact, if you are working on your core and doing, say, burpees, then you’ll notice the step count will shoot up with the (upward) swinging motion of your arms. Regardless, the tracker should give you a reasonable estimate of how many steps you’re taking in a day. 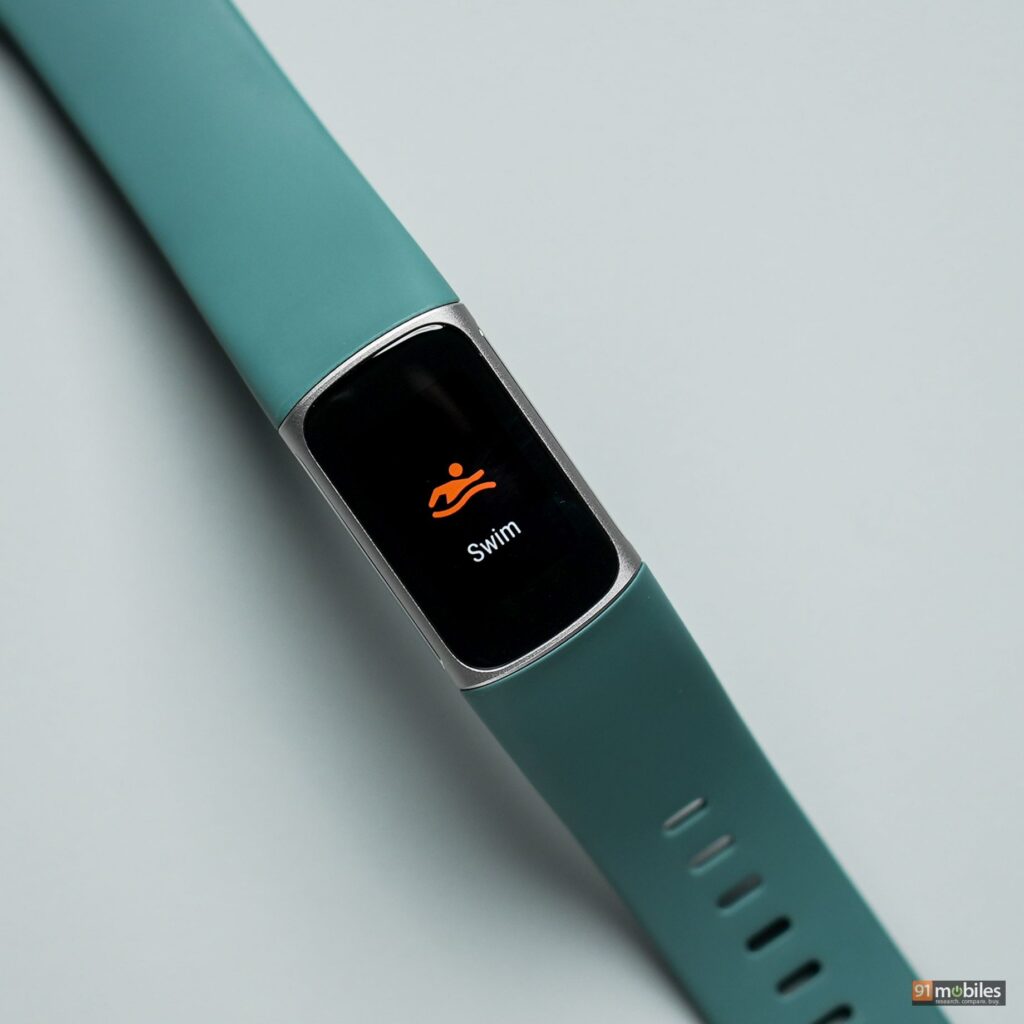 I couldn’t quite test the swimming feature on the Charge 5, on account of the ongoing pandemic. However, I did dabble with weight training which can give you useful insights on the calories burnt, average heart rate during the workout, and your active zone minutes, which account for the time you spent in a moderate/intense workout activity. All the data is neatly collated in the Fitbit app and you can refer to the same to finetune your workouts, ensuring you’re not spending too much time on the phone looking at memes in between different sets. 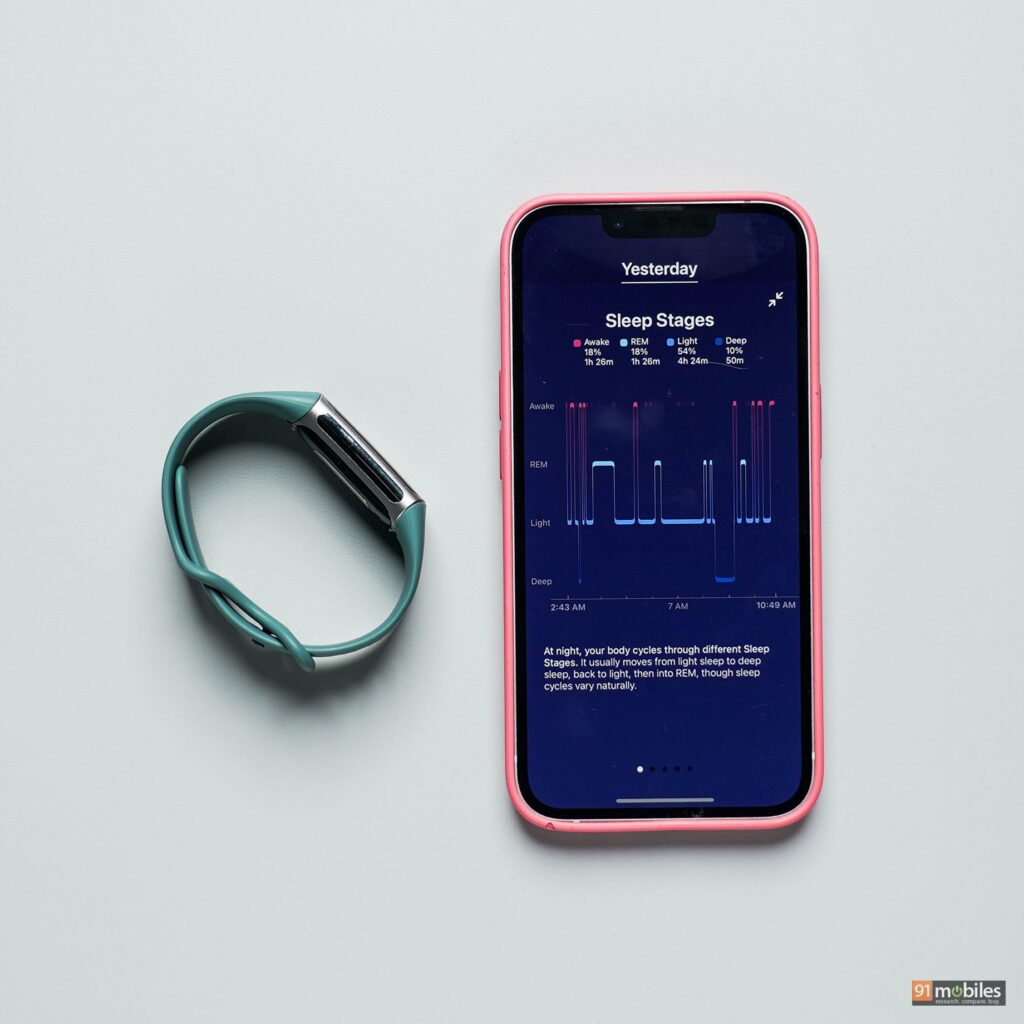 I was quite happy with the sleep tracking results too. As such, the Charge 5 breaks down your sleep into three categories, including Deep, Light, and REM sleep. What’s more, if you are a Fitbit Premium member, then the wearable will also share some added insights regarding your sleeping patterns, including an analysis of your sleeping heart rate. As always, the data is collected and presented to the end-user by means of high-quality graphs, which is nice. 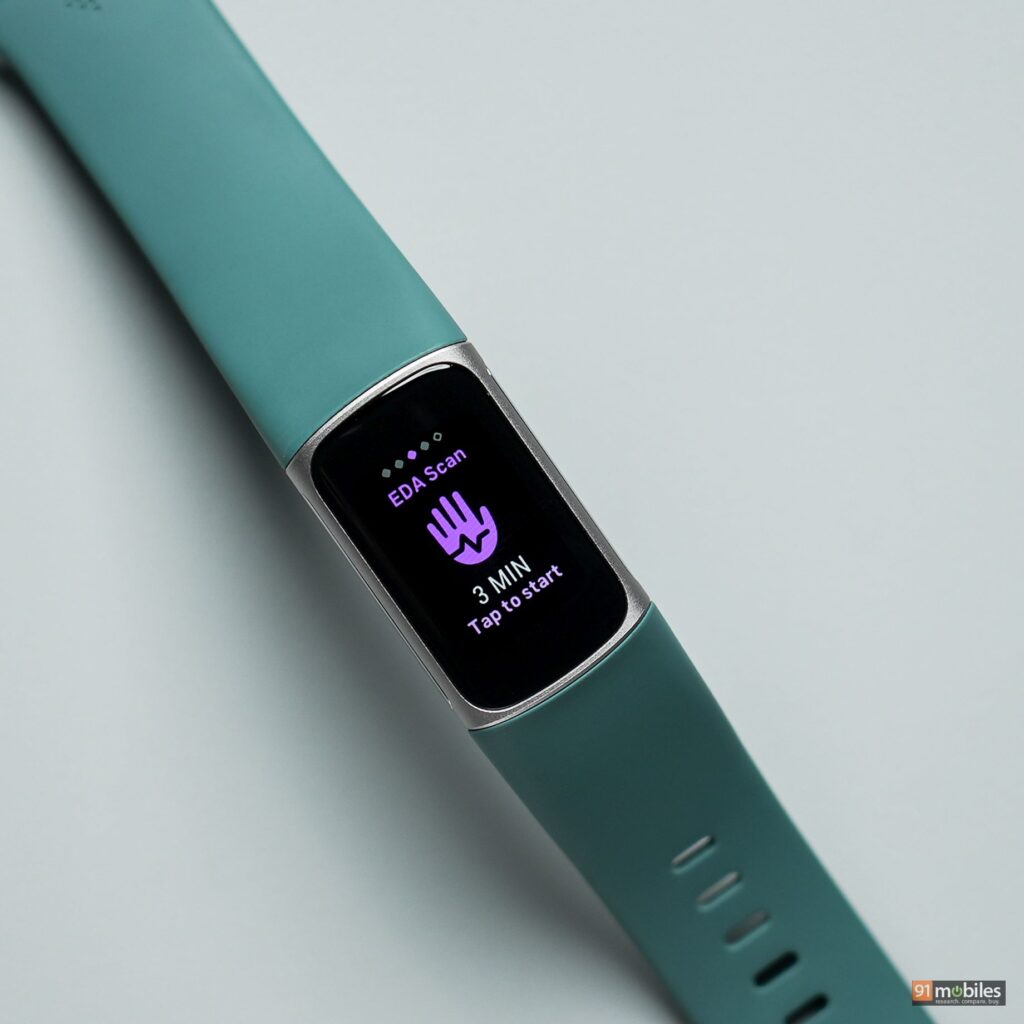 On the flip side, I wasn’t quite sold on the wearable’s EDA tracking. For one, the EDA scan takes around three minutes to complete, which can be a bit uncomfortable, seeing how you have to press against the metal rails on either side of the tracker during the entirety of the scan. More importantly, I never felt the urge to check an app to figure out if my stress levels were elevated or not, though I’m sure it should be useful for others. The same goes for SpO2 monitoring too. As things stand, the Charge 5 will only give you insights into your SpO2 levels after you go to sleep. However, I would like to be able to monitor the same on demand, especially given the current state of affairs. 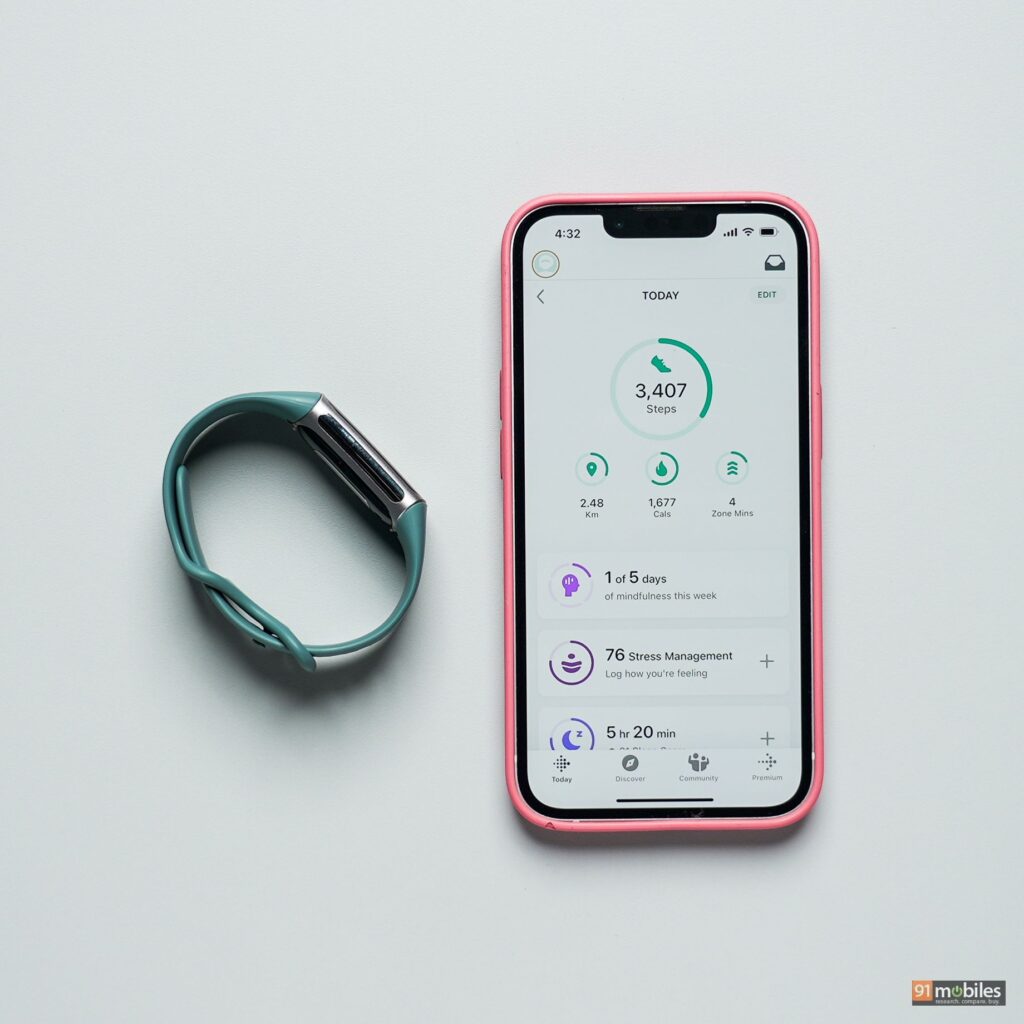 Of course, buyers opting for the Charge 5 will have to download the Fitbit’s companion app, available both for Android as well iOS. Now, the app’s interface isn’t all that bad, although it could do with a bit of streamlining. You see, the app is a treasure trove of fitness-related data and at times, it can get a bit overwhelming, especially if you’ve just bought your first Fitbit. What’s more, the device customisation settings are buried deep within the user’s profile page, so you’ll have to navigate through a host of fitness-related metrics to merely download a clock face for your Charge 5. On the flip side, the company’s ever-growing community hub will entice you to work out more and you can even invite your friends and participate in various challenges together. 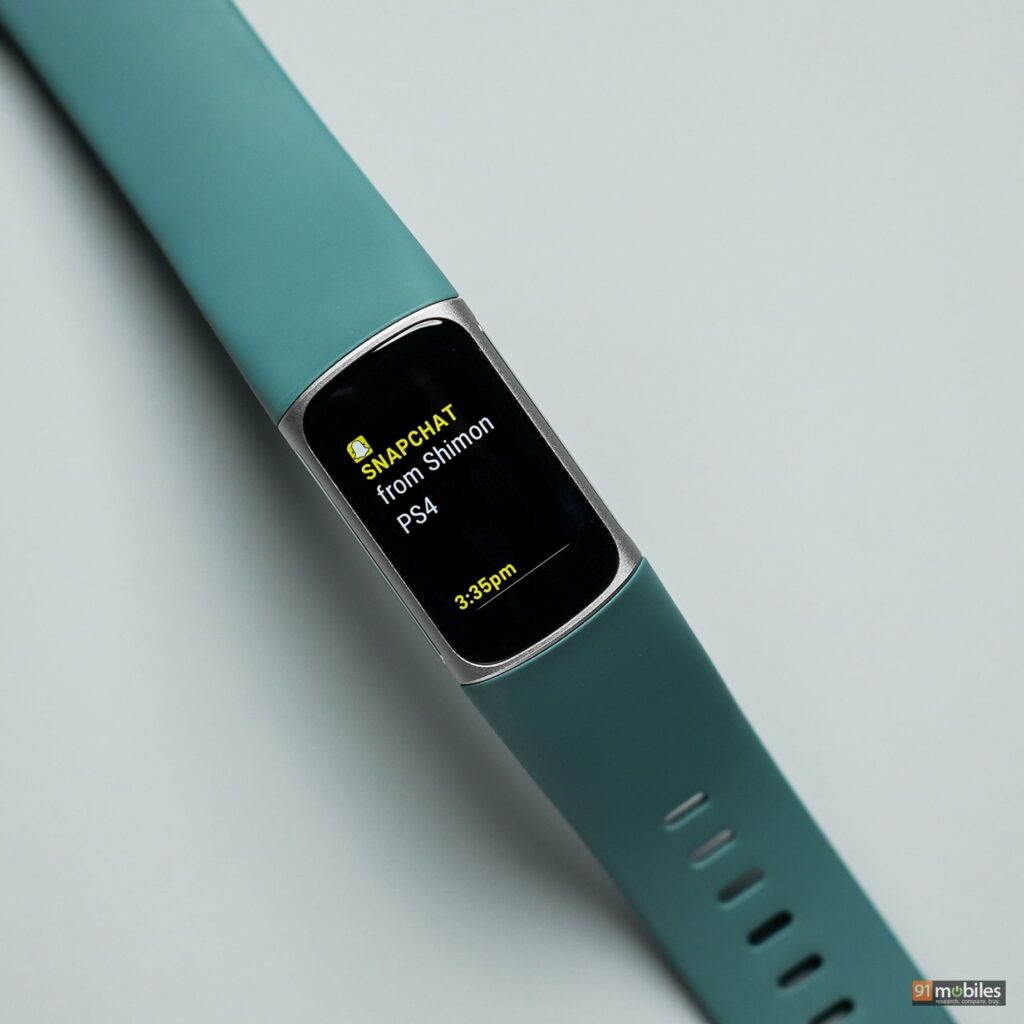 Furthermore, while the Charge 5 can relay notifications from most, if not all third-party apps, you won’t be able to revert to the same from the wearable’s interface. I was hoping the company would at least add support for quick replies for apps like WhatsApp but no such luck. That’s not all, as I couldn’t control music playback from the Charge 5 either. From what I can gather, users need to allow notifications for a music streaming service like Apple Music or Spotify from the Fitbit app. But, there’s a catch – to add an app to the list of utilities that can send notifications to your wrist, the app first needs to send notifications to your phone. Seeing how I couldn’t get Apple Music to send me a notification on my phone, it didn’t show up on Fitbit’s companion app, and well, long story short, I couldn’t get music playback controls working on my unit of the Charge 5. 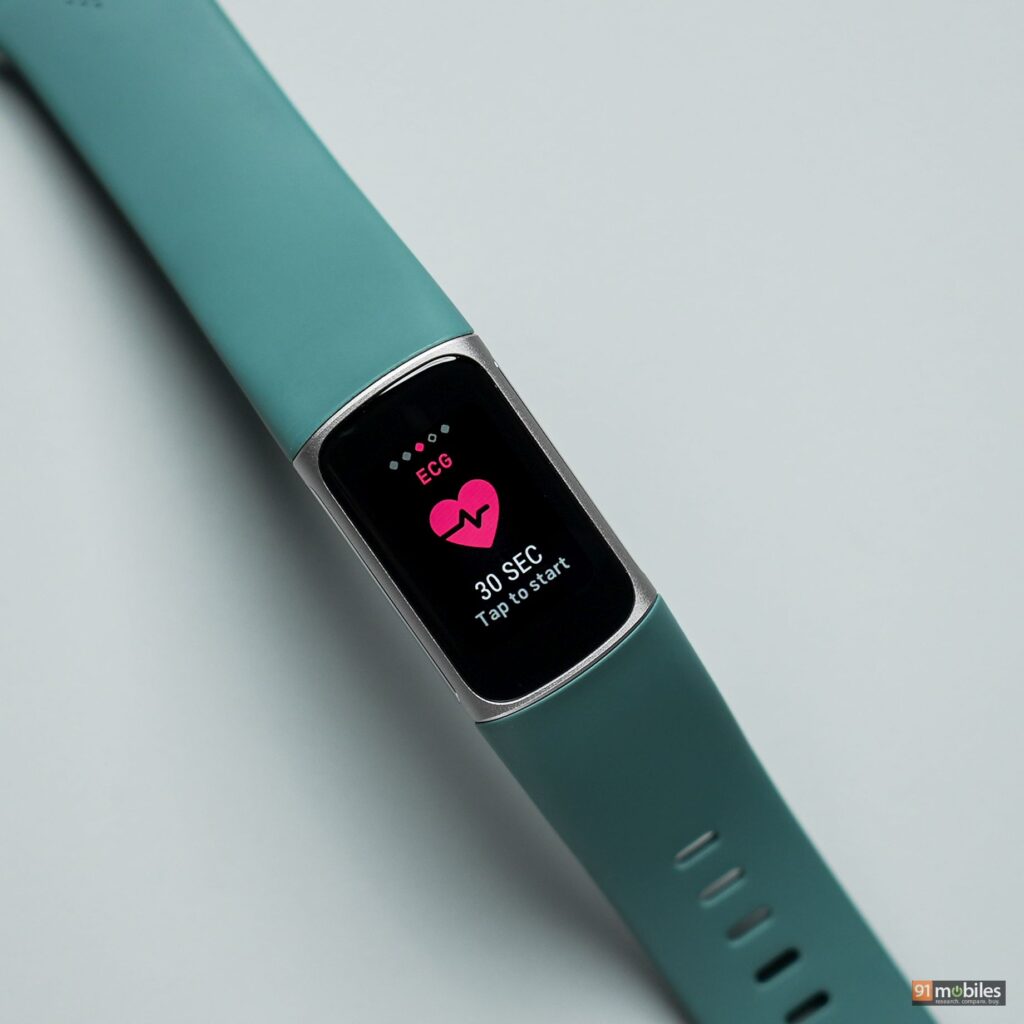 On the bright side, the Charge 5 didn’t give me any battery woes and with the Always-On display enabled, the wearable managed to last me around three days off a single charge, which is nice. That said, your mileage could vary if you have AOD disabled, or if you have lesser / more apps buzzing your wrist.

So, where does that leave us? Well, the Charge 5’s pricing pits it against full-fledged smartwatches that will not only help you along your fitness journey but will also ensure that you don’t have to reach for your phone for mundane tasks like jumping to the next song on your playlist. Moreover, most smartwatches in the Charge 5’s price range can give you SpO2 readings on demand as well. Consequently, if you’re looking for a ‘do it all’ wearable, your money would be better spent on the Galaxy Watch Active 2 or the OPPO Watch. 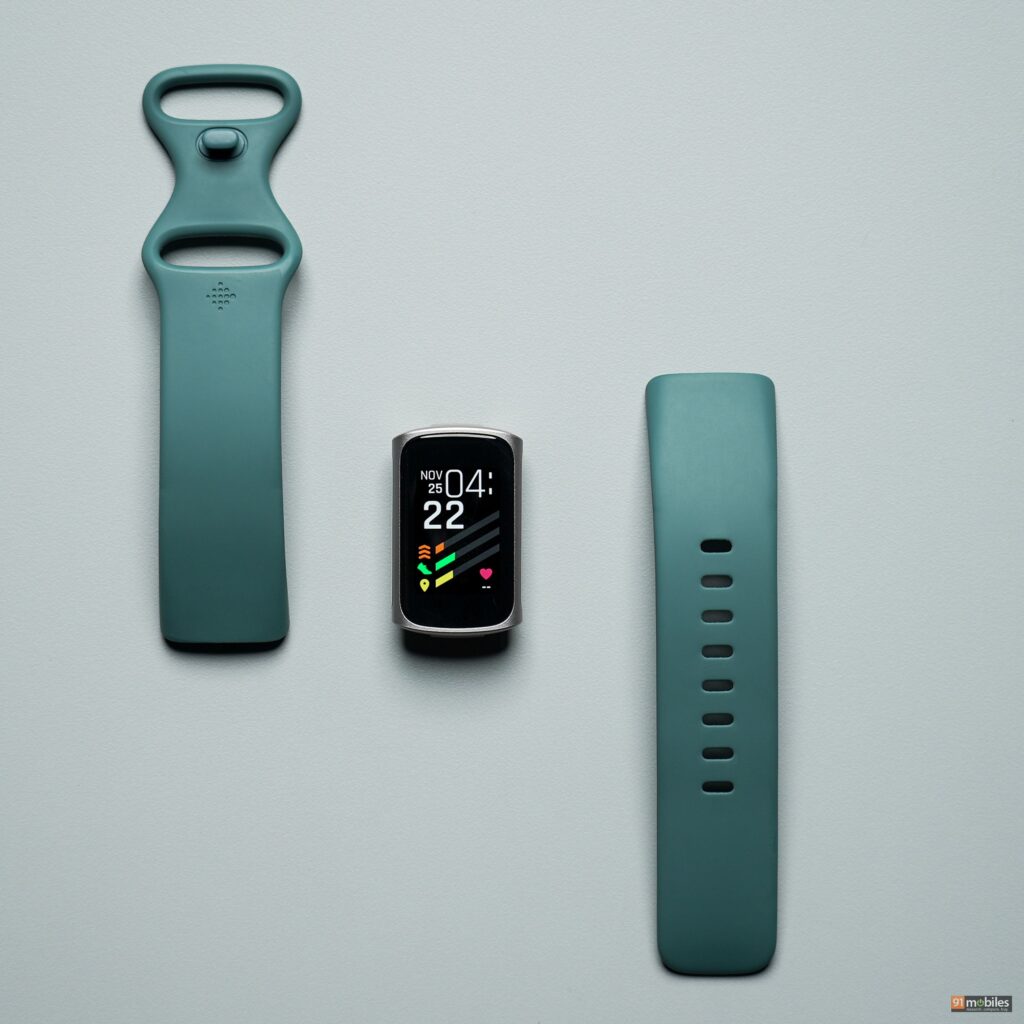 That said, the Fitbit Charge 5 certainly has a lot going for it, including a stylish, all-day wear design, built-in GPS and ECG, a gorgeous OLED display, and support for a wide array of fitness tracking metrics. What’s more, the wearable’s sleep analysis offers a ton of insightful data too, and the company’s community hub will definitely keep fitness enthusiasts on their toes. If you want a high-end, stylish and comfortable fitness tracker that puts your health first, then the Charge 5 is a worthy option.