There is no shortage of open-world games, and while games like The Witcher 3: Wild Hunt and Legend of Zelda: Breath of the wild have redefined the impact an open world has, there are those like Ubisoft’s Far Cry and Assassin’s Creed franchise that sticks to a tried and tested formula catering to fans that want a large open world littered with quests and collectables. Ghostwire Tokyo adds its own take to the tried and tested formula offering gamers a unique lush world to explore, a story filled with Japanese lore and some interesting gameplay. 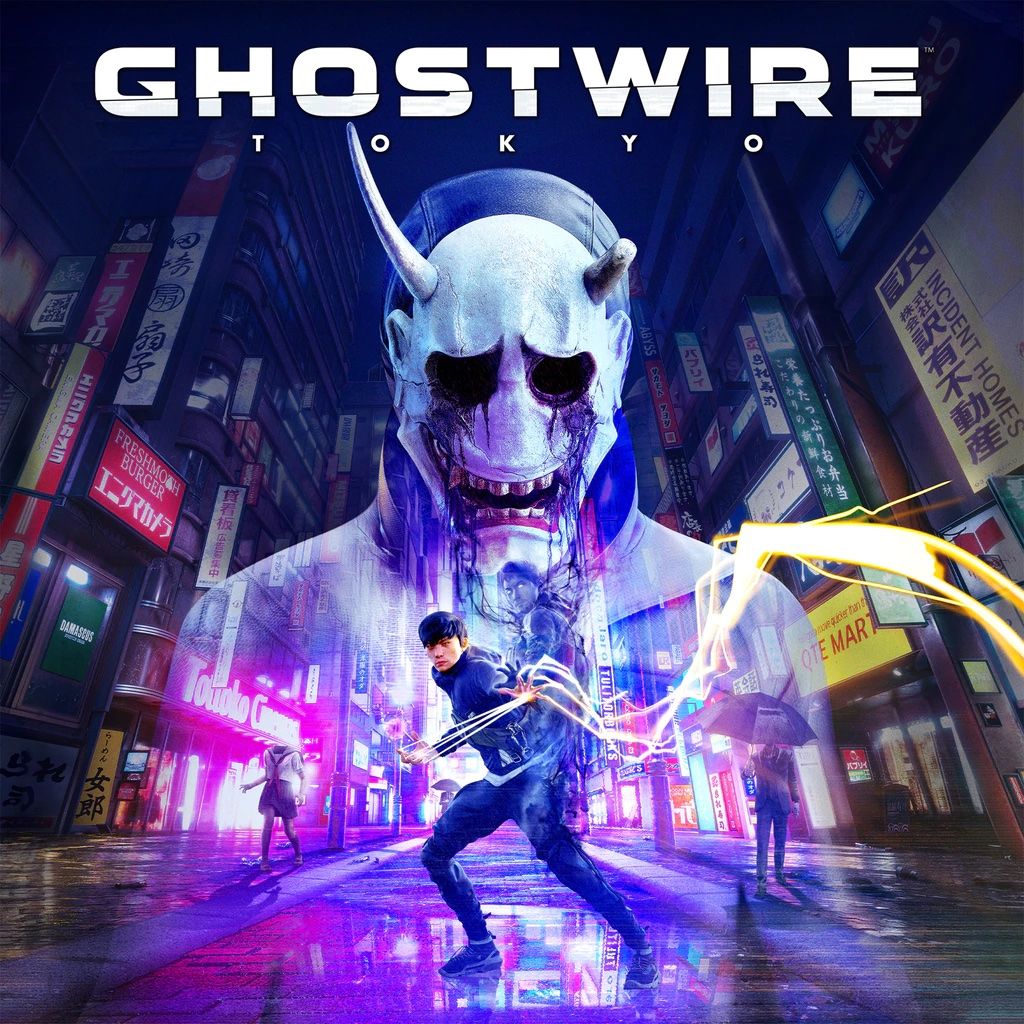 A mysterious fog has engulfed Tokyo eliminating all life. You don the role of Akito, who survives the fog because the spirit of a detective named KK possesses his body. Akito wants to know what happened to his sister who is in a hospital and KK wants to defeat the mysterious antagonist in a Hannya mask to save the city.

The plot of the game is pretty straightforward with the usual twists and turns and the introduction of new characters that offer depth to the story. Without spoiling too much you have the likes of Ed who rather than having a conversation with you, leaves voice recordings at telephone booths giving you instructions and guidance to progress through the game. Then there is the usual ensemble of supporting characters mostly associated with KK that add some depth to his backstory and motivation. 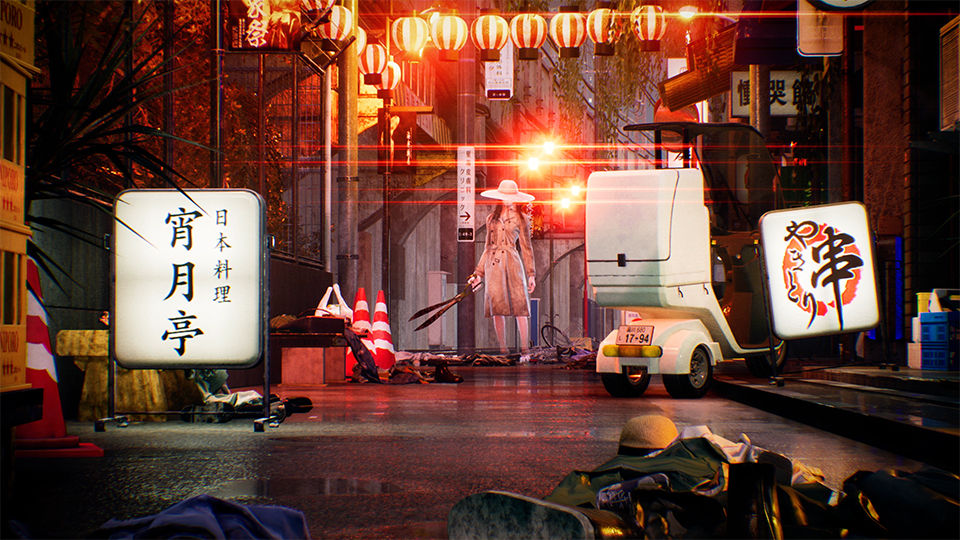 While the story gets the job done stitching the various plot points together, the relationship between KK and Akito could have been better. KK invaded the first body he could find and Akito isn’t too pleased to have another personality inside his head. This is quite similar to what we’ve seen in Cyberpunk 2077 where the protagonist V has Johnny Silverhand’s personality inside his head throughout the game. However, in Cyberpunks’ case, the banter between the two characters is much better, offering moral dilemmas and choices that affect the outcome of each mission and ultimately the game. However, in the case of Akito and KK, the banter is a little more straightforward. 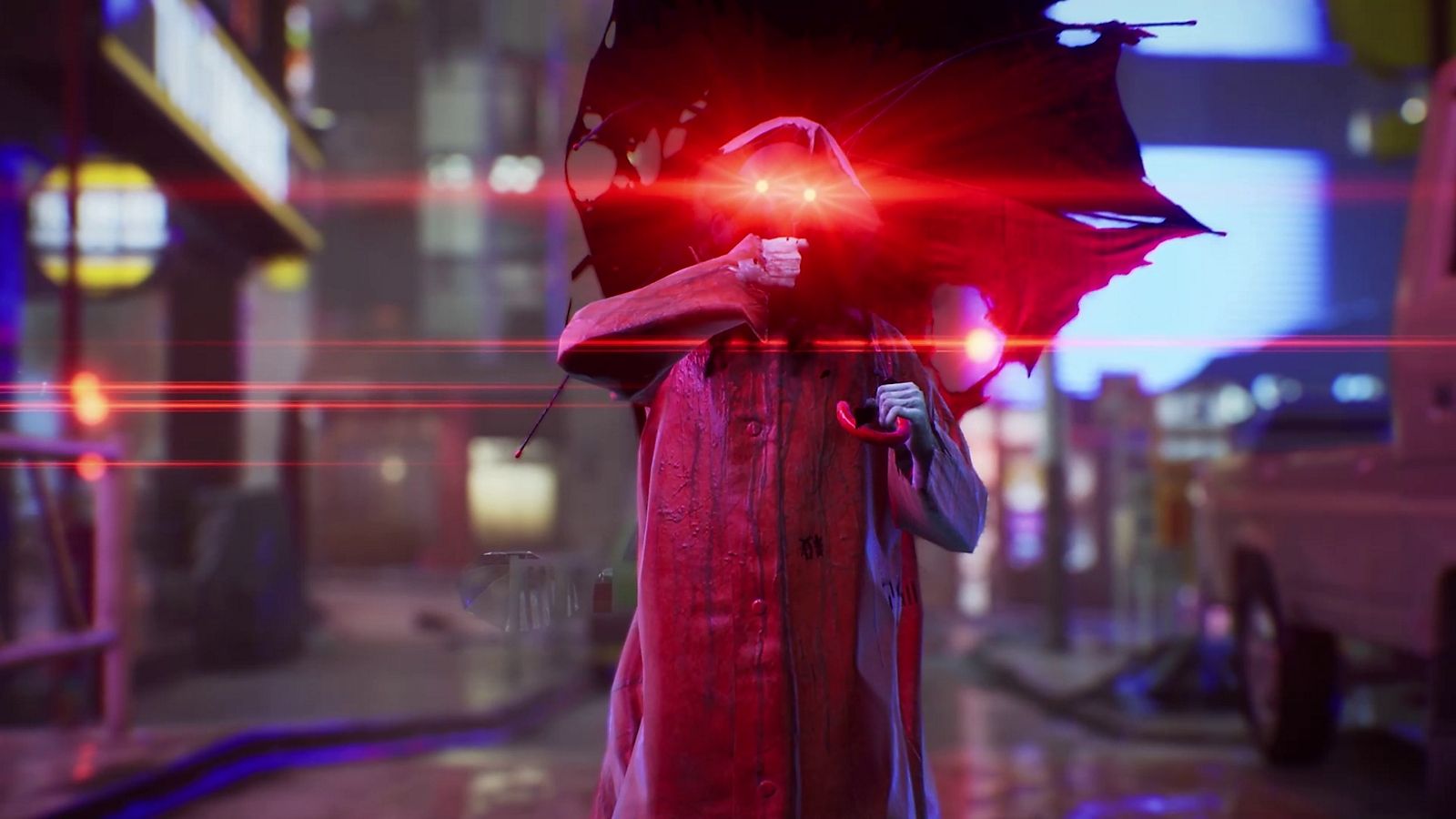 Drawing reference to Cyberpunk once again, one of the best graphical elements of Cyberpunk 2077 are the loading animations of some of the weapons. They look downright cool. Some of the weapons in the game (like Skippy the talking gun) just add to the amusement Cyberpunk offers. In Ghostwire Tokyo, you use hand movements inspired by Kuji-kiri hand gestures to cast spells. These spells called Ethereal Weaving are the equivalent of guns when compared to a traditional first-person shooter. The animation of Akito’s hands drawing these spells looks very cool and it will be quite some time before you get bored of these animations. You have Wind Weaving which is the equivalent of a pistol, Water Weaving which works like a shotgun blast and Fire Weaving works like a heavy weapon like a rocket launcher. You also have a bow and arrow that works exactly as it should.

All your spells and abilities can be upgraded with skill points adding tried and tested features like more firepower, higher ammunition capacity, faster cooldown, and more. 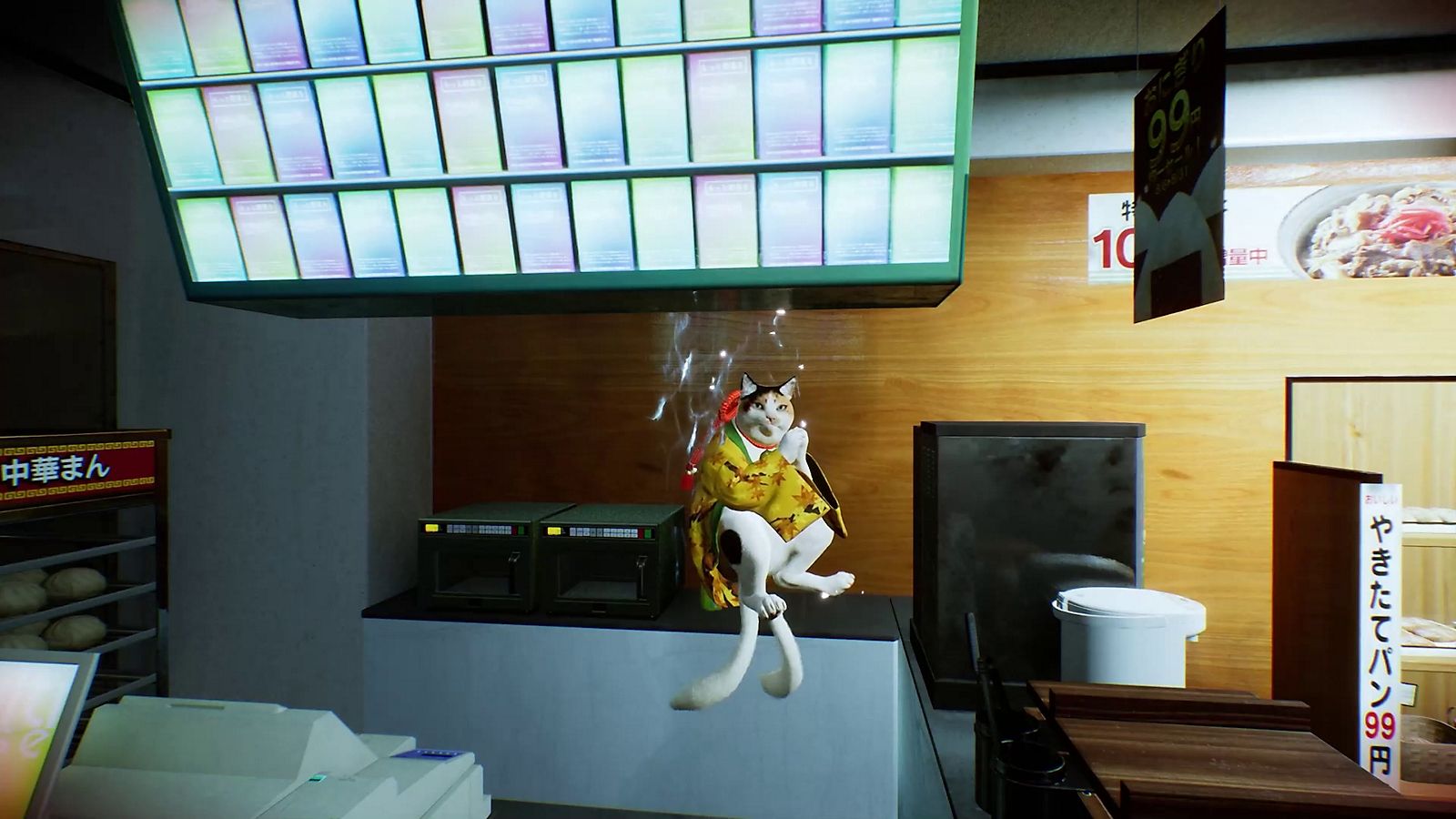 All the other elements of gameplay are typical of an open-world game. You will mostly explore the world on foot with the exception of certain flying creatures (which act like grappling points) letting you access rooftops throughout the city. There are Torii Gate you need to cleanse before you can start exploring a new area of the city and there are shops run by cats (yes, cats!) where you can purchase different items like food for health regeneration, ammunition, and Katashiro which is the tool you use to free trapped spirits.

Overall the gameplay sticks with tried and tested formulas of open-world games while adding its own visual flair to it. 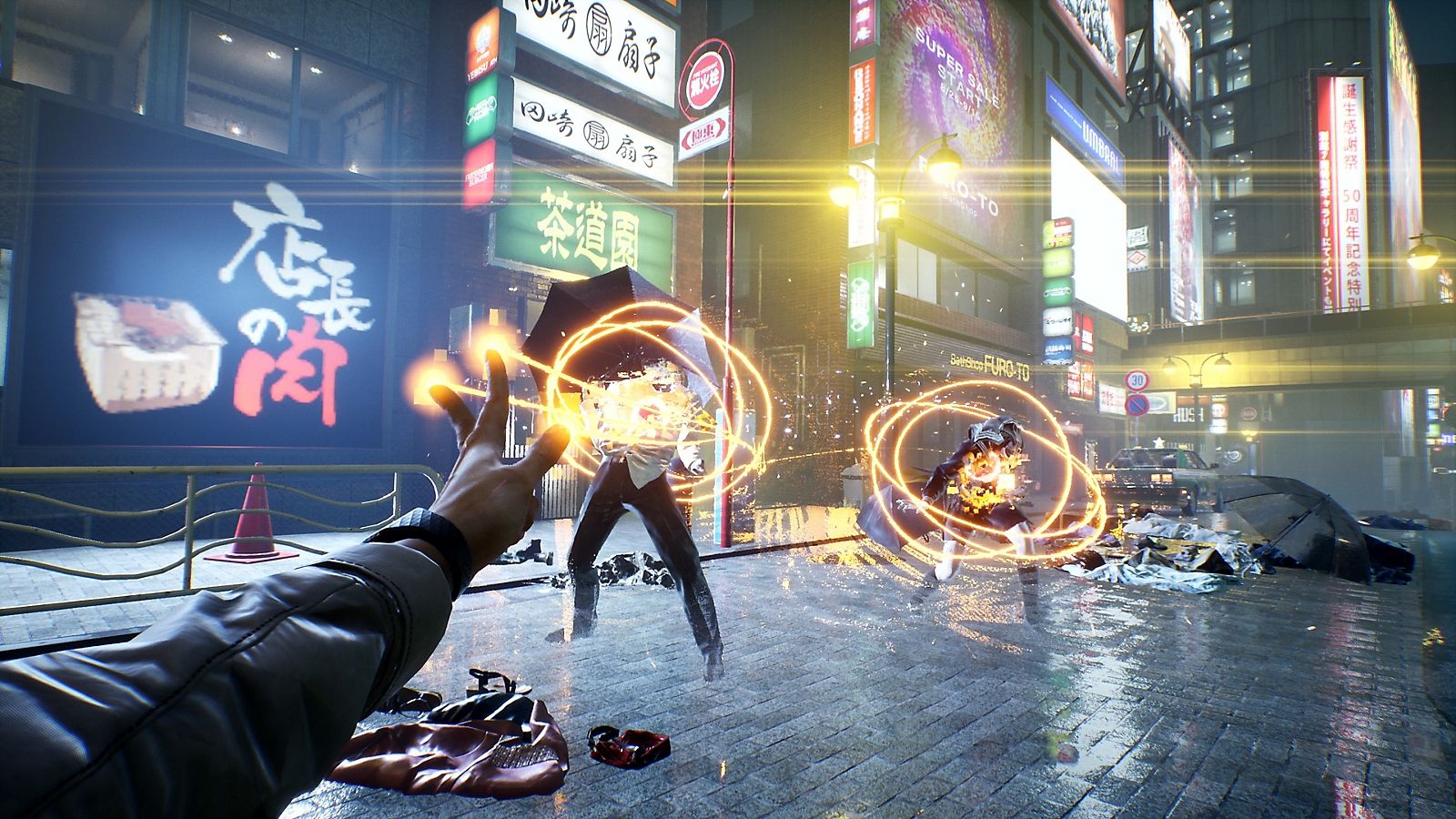 Ghostwire Tokyo looks visually stunning. The game offers a number of graphical options to choose from and this can get a little confusing. Most games on the current console generation (PS5 and Xbox Series X) give players the option of a quality mode targeting a higher resolution capped at 30FPS or a performance mode targeting a slightly lower resolution with a 60FPS cap. Some games also offer a 120FPS mode while others give the option to switch on/off ray-tracing as well. The way the options are presented in most games is easy to understand and implement. In Ghostwire Tokyo you have the following six options.

While this isn’t the first game to offer a plethora of options on consoles, the UI isn’t very clear as to which mode offers what and I wish the modes were a lot easier to understand. If you want a deep dive into the performance of each mode I recommend you check out the Digital Foundry analysis here. They also highlight the difference in performance based on the TV you have. If you have a TV with HDMI 2.1, then the game targets a higher framerate.

The various performance modes aside, the bustling city of Tokyo feels surreal without its inhabitants. The city isn’t empty as you have ghost-like foes roaming the streets. The design of the foes has an air of creepiness to them. They vary from tall lanky men in business suits to teenage girls in school outfits, some tall women with hedge trimmers and more. While their attacks may look standard, they do offer a sense of horror and some jump scares to keep you at the edge of your seat. There are boss fights as well thrown into the mix and while some of them are interesting, don’t expect the variety found in Elden Ring.

The game overall is a visual treat with stunning visuals, an eerie atmosphere and some unique enemy designs.

When it comes to the sound, I found the weakest aspect to be the voice acting of Akito and KK. Games like Ghost of Tsushima have a distinct Japanese accent to their English dubbing with very good convincing voiceovers and the same felt lacking here. Apart from this, the rest of the sound design of Ghostwire Tokyo is good. You have a distinct swish and thud for each of your Ethereal Weaving and the high octave music that kicks in during combat will keep you at the edge of your seat. The speaker in the DualSenses controller is used quite well adding immersive sound effects to each of your projectile spells and also to environmental elements.

Ghostwire Tokyo doesn’t reinvent the open-world wheel. It takes the tried and tested Ubisoft formula found in games like Far Cry, adds its own twist to it with a unique combat style, a stunning eerie atmosphere and a deep dive into some Japanese mythology. If you enjoy open-world games like Far Cry or are looking for an open-world game with a slightly creepy atmosphere then you can definitely check the game out. If you have a high-end OLED TV, then the visuals of the game will pop. If you prefer games like Breath of the Wild, Ghostwire Tokyo may not be for you.