I still remember the goosebumps I got the first time I played with a phone that sported a foldable screen (the Huawei Mate X), knowing I might be holding the future of smartphones in my hand. Of course, a lot of water has flown under the bridge since then, and while foldable smartphones still aren’t mainstream yet, not many would raise an eyebrow at the mention of one. The question is, why should smartphones have all the fun? Lenovo decided to give a similar treatment to a laptop, and the result is the ThinkPad X1 Fold. 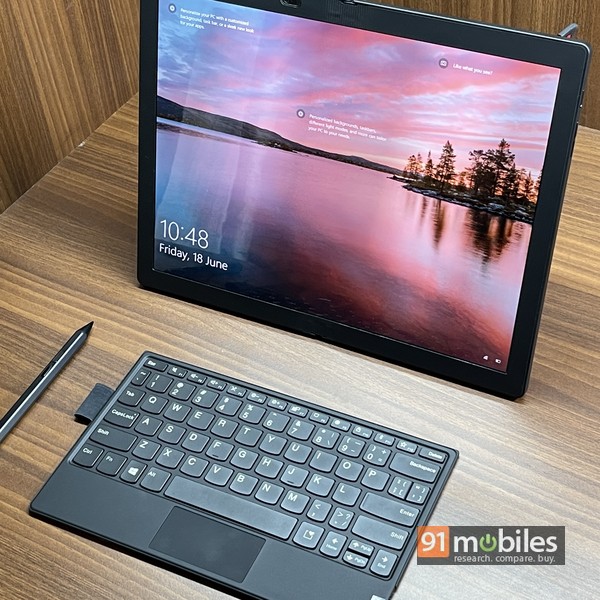 Tablet-laptop hybrids are a dime a dozen, and in some sense, the ThinkPad X1 Fold has the same premise. However, it’s clear that Lenovo has put a lot of thought (not to mention innovation and engineering) into it, and the implementation is actually quite nifty. Sure, the thing is atrociously priced and not for everyone, but it sure is a cool piece of tech. Here are my two cents. The box opens up to reveal what looks like a large tablet with a 13.3-inch screen and wide bezels all around. Pull it out, and the first thing that comes to mind is how heavy and thick the ‘tablet’ is. The back is coated in pure leather, with “ThinkPad X1” emblazoned on top left. 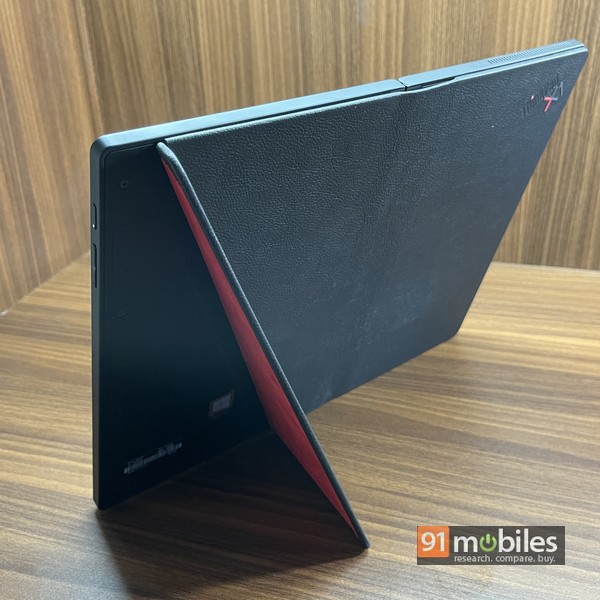 One portion of the leather back flips out and turns into a kickstand, using which the device can be propped up on a table. Hold the slate in portrait mode, and you’ll notice the speaker vents towards the left, along with a USB Type-C port. The right spine has a volume rocker and a power button, while another Type-C port, inexplicably, is located on the bottom. The placement does seem odd considering this port isn’t accessible when the device is propped up on the kickstand. A 3.5mm jack is conspicuous by its absence. A webcam is placed off-centre on the top bezel. Now the placement of the webcam seems odd too, but Lenovo actually has a pretty good reason for this. The camera can’t really be placed in the middle since that’s where the hinge is, and that’s what makes the magic happen. As with any foldable device, one of the first things that pops up in the mind is how sturdy it is, and if it can withstand the rigours of daily use. Well, the way I see it, the X1 Fold is part of the ThinkPad lineup, and that in itself is a testament to its build quality. In fact, the build quality seems super sturdy, and that’s quite something given I’m talking about a foldable device here.

The Fold magic – use cases 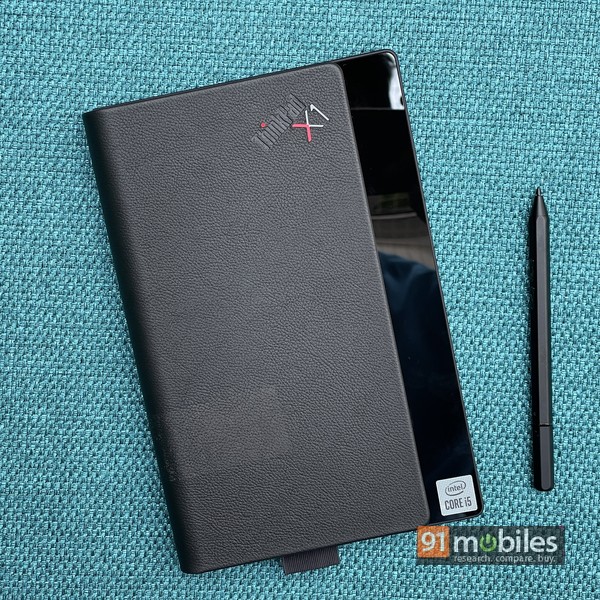 The magic that I’m referring to becomes apparent when you fold the tablet in the middle, an action that does need both hands and a fair bit of pressure… but at the end, you’re left with a compact device in your hand that basically looks like a thick, leather-bound book. 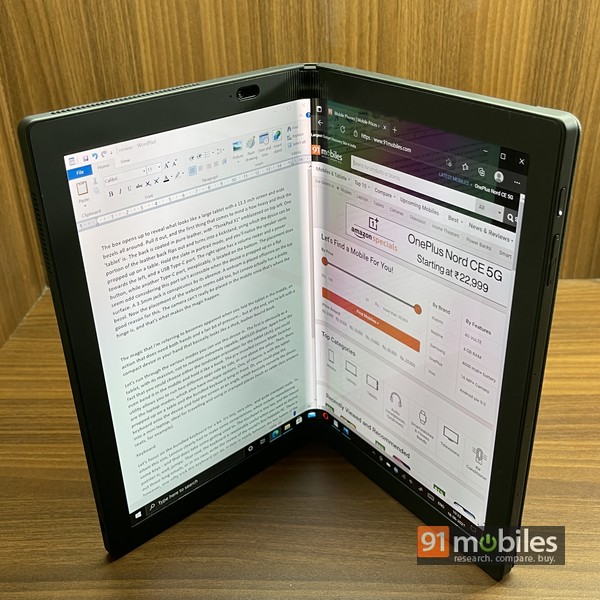 Let’s run through the various modes you can use this device in. The first is obviously as a tablet, with its massive, not to mention extremely capable, AMOLED display. Apart from the fact that you could choose either the landscape or the portrait orientation for the tablet (duh), you could even bend it in the middle and hold it like a book. The pre-installed Lenovo Mode Switcher utility allows you to run two windows side by side (in landscape), or one above the other (portrait). Then, there are the laptop modes, which also have multiple options as far as usage is concerned. One, of course, is with the tablet propped up on a table and the bundled keyboard lying in front. This basically gives you a proper laptop with a 13-inch screen and a physical keyboard. 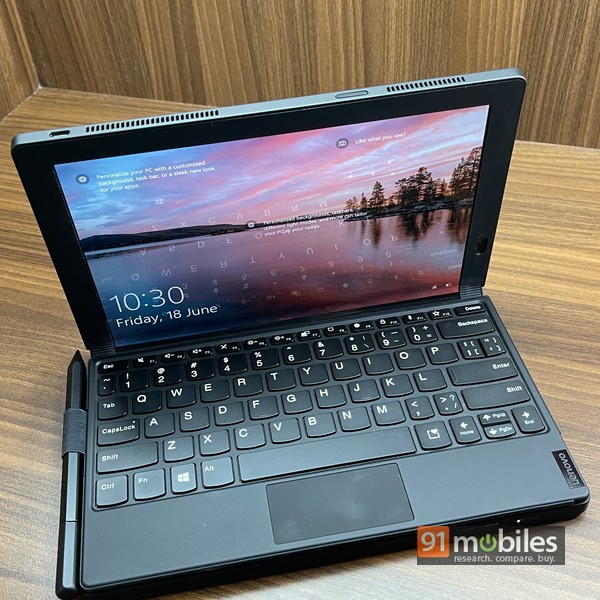 Or, you could plop the keyboard onto the device and fold the screen at an angle, which converts the device into a mini laptop with a 9-inch screen, ideal for traveling and using in cramped places (such as cattle class airplane seats, for example). The software handles the proper screen orientation and resizing depending upon the mode you choose to use the device in. As I found out though, the software can be a bit finicky and fails to do its bit sometimes. 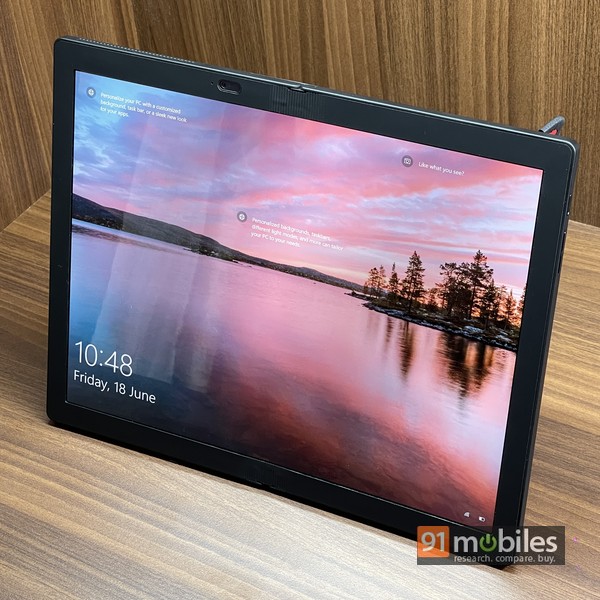 The 13.3-inch, 2,048 x 1,536 OLED screen is a beauty. It’s hard not to be amazed by how crisp and vivid those visuals are. It’s very responsive to touch too, and viewing anything on this is an absolute pleasure. The fact that the crease is barely visible is also quite amazing, all thanks to the X1 Fold’s design and possibly due to the screen’s multi-layered construction. On the flip side though, the screen is quite glossy, so using it outdoors could be slightly problematic because of that. 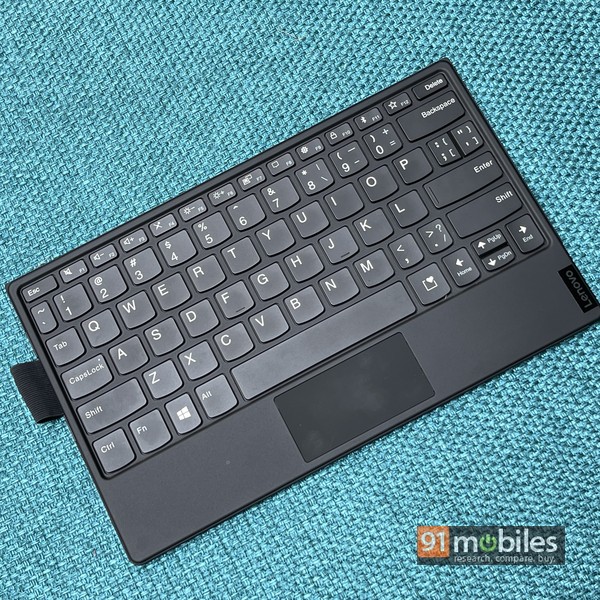 Let’s focus on the bundled keyboard for a bit. It’s tiny, very slim, and quite cramped. To attain this size, Lenovo clearly had to make some compromises, which include repositioning some keys – and that does take some getting used to. The touchpad is tiny too, and the mouse pointer is, well, jumpy. That said, the keyboard is reasonably useful when you want to thump out those long emails, or in my case, write the review of the world’s first foldable PC. 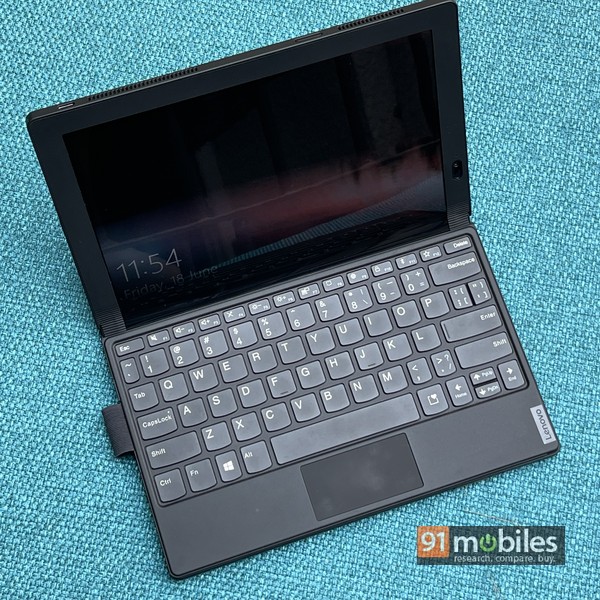 There is however, one nifty trick this keyboard can do. It slots in neatly between the two halves of the screen when the device is folded, attaching magnetically to the side bezels. What’s niftier is the fact that the keyboard’s built-in battery charges wirelessly while it’s ensconced in that position and the clamshell is closed, though you also have the option of charging via the micro-USB port built into the keyboard’s side. Of course, it’d probably be wiser to invest in a full-sized Bluetooth keyboard if you want to use the device for some serious typing at home.

While my review unit of the X1 Fold came with Windows 10 Pro, you also get the option of getting yours with the Home edition of Microsoft’s OS. Now Windows isn’t great for touch-based usage, and that includes the OS’ tablet mode too. In that sense, you’re limited by the usability issues presented by the platform itself. However, the ThinkPad X1 Fold works great for content consumption and general web browsing.

The device comes powered by the Intel Core i5-L167G7 processor, which is part of the chipmaker’s Lakefield series, and is a hybrid chip that tries to balance performance with power efficiency. Along with this, you get 8 gigs of RAM, and either 256 or 512GB of SSD storage. The combination is no powerhouse, and in any case, the device isn’t designed to handle heavy workloads or intensive gaming. The boot-up time seems unreasonably long, and app opening times aren’t too great either. That said, the day-to-day performance is quite smooth, and keeping 10-12 Chrome tabs open (like I usually do), and using it for tasks like Zoom video calls and typing out documents doesn’t show any lag or stutter. 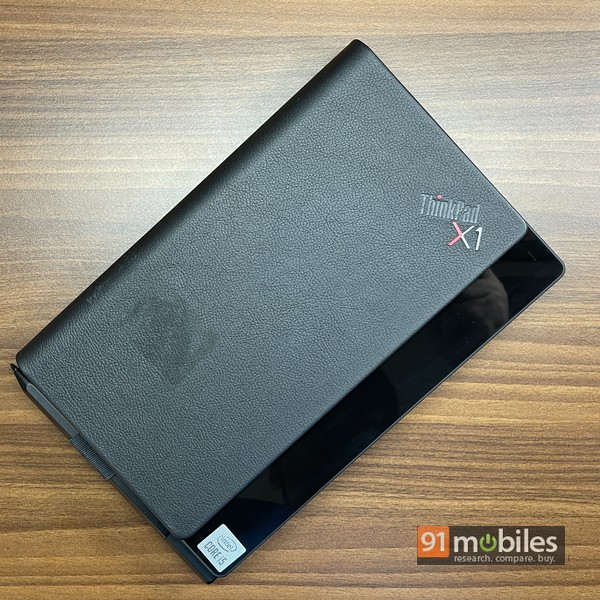 With just two USB Type-C ports, the device isn’t too great for connectivity… though being a MacBook user, I’ve come to terms with this. However, the ThinkPad X1 Fold doesn’t have a 3.5mm headset socket either, and that’s something I sorely miss. Wireless connectivity options include Wi-Fi and Bluetooth as usual, and there’s also an optional 5G module you can purchase. Speaking of accessories, there’s also an option to get a Lenovo Mod Pen if that’s something you’d want to use. The active pen has a built-in rechargeable battery that can be juiced up using the same adapter that’s bundled with the laptop, and can be used for drawing, doodling, note-taking and annotating documents. The mini keyboard has a small loop on the side where the pen can be stowed away when not in use.

The ThinkPad X1 Fold has just about acceptable battery life – lasting about 5 to 6 hours. The Type-C based 65W adapter charges up the device in a little over two hours. 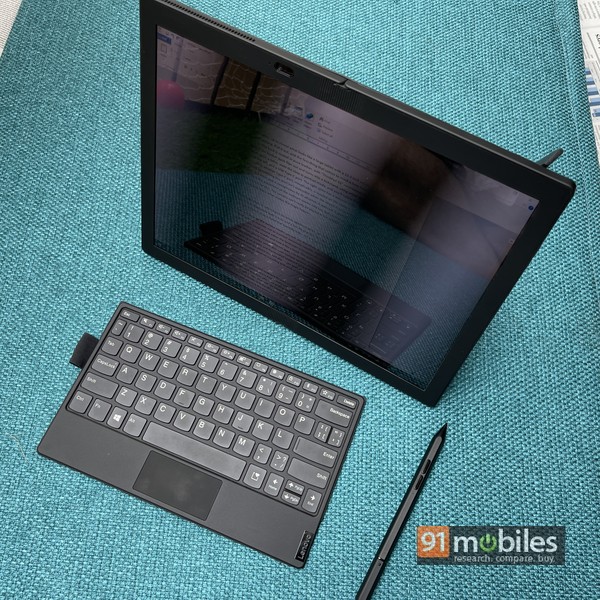 The Lenovo ThinkPad X1 Fold isn’t perfect, far from it. At a starting price of Rs 3.15 lakh, it’s very pricey. And then, it has software issues, isn’t a performance powerhouse, and has other niggles too. I’m not too sure if I can say it represents the future of mobile computing, given how slowly things have progressed on the smartphone side of things. Foldable screen tech is still expensive, and yet to trickle down to the masses. That should happen sometime though, and the X1 Fold is the first step in that direction as far as laptops are concerned. The engineers and product designers at Lenovo have clearly put a lot of thought into it, and that shows. And just for that, it wins extra points from me. All said and done, the Lenovo ThinkPad X1 Fold is an engineering marvel, and while it might not be for everyone, in my books (pun unintended), it carries forward the ThinkPad legacy nicely, sprinkled with lots and lots of innovation.