I have been a fan of Lenovo products for a while and not without good reason. The company has usually been great at offering respectable specs for the price, whether it is an ultrabook or a 2-in-1 laptop. The Yoga series from Lenovo has been quite popular, with most models featuring good designs and a premium feel. The Lenovo Yoga 7i 2-in-1 laptop is one such product, powered by the latest Intel 11th-gen CPUs and integrated Iris Xe GPU. It’s priced at a substantial Rs 99,990, which makes one wonder if the Yoga 7i is deserving of such a large chunk of your wallet. In this review let’s try and answer that very same question. 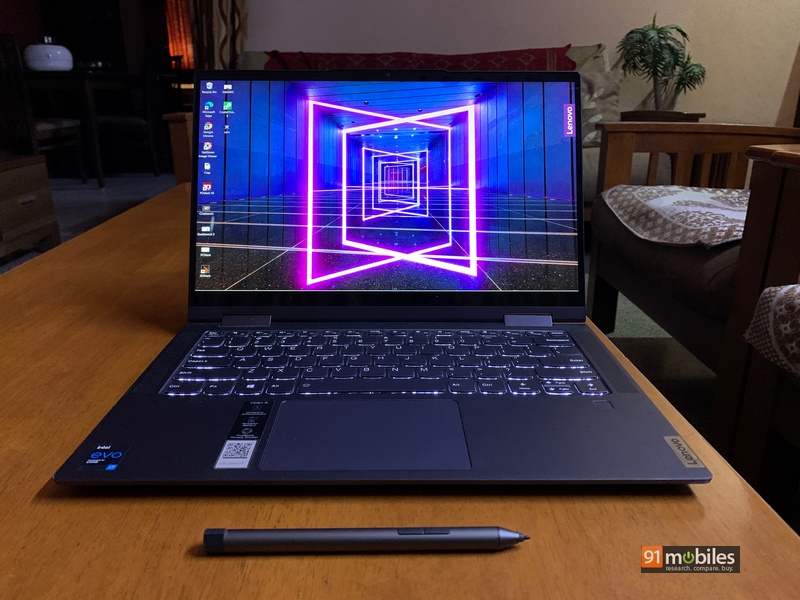 The Yoga 7i employs a unibody aluminum chassis while keeping the thickness to a minimum. There is zero flex on the keyboard, and a matte finish greets my palm and wrists just below it. Despite being fashioned out of metal, there is hardly any weight to the device, making it a portable machine that can be easily tucked inside a backpack. The hinge design makes the Yoga 7i all the more compelling, thanks to a sturdy yet flexible build allowing you to turn the screen full 360-degrees and use it as a tablet. Yet the hinge’s firm hold over the lid takes at least two hands to open it. The touchscreen on the device does add to the overall usability, although I rarely operated the Yoga 7i in tablet mode. The keyboard on the back just doesn’t provide a good enough grip for that. Lenovo has even provided a stylus with the device to make full use of the touchscreen. The Slate Grey colour scheme extends across the entire body of the laptop, with no sign of any other shade anywhere except the trackpad. Finally, there is a webcam present on the top bezel, with a physical slider on top for privacy. 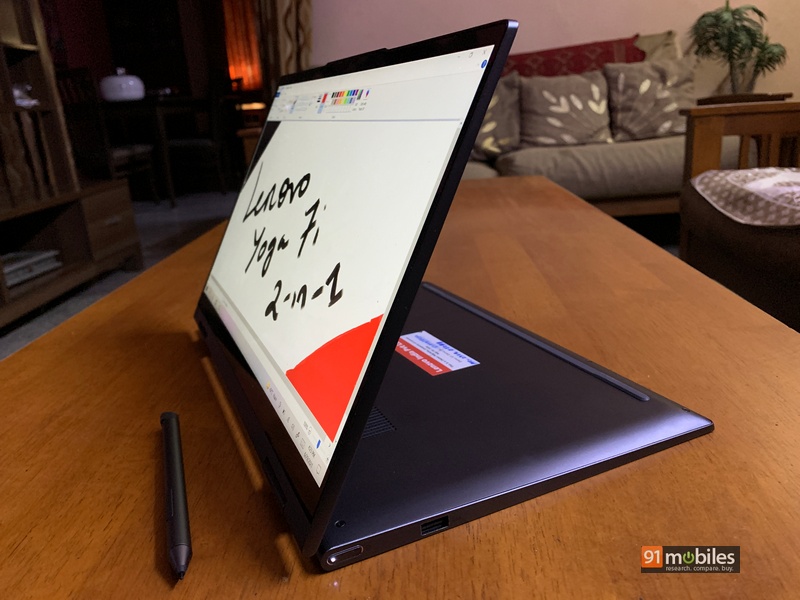 Flanking either side of the keyboard is the Dolby Atmos speaker system, which emits crisp audio. As far as connectivity goes, there’s a small selection of ports available, which includes a USB 3.2 port, two USB C ports with Thunderbolt 4 connectivity, and a 3.5mm headphone jack. I do miss an HDMI 2.0 port, and an SD card reader would’ve been quite handy too. A third USB C on the right could’ve allowed charging the laptop from either side, but I guess that’s a missed opportunity. Wireless connectivity options include the usual Wi-Fi 6 and Bluetooth 5.2. 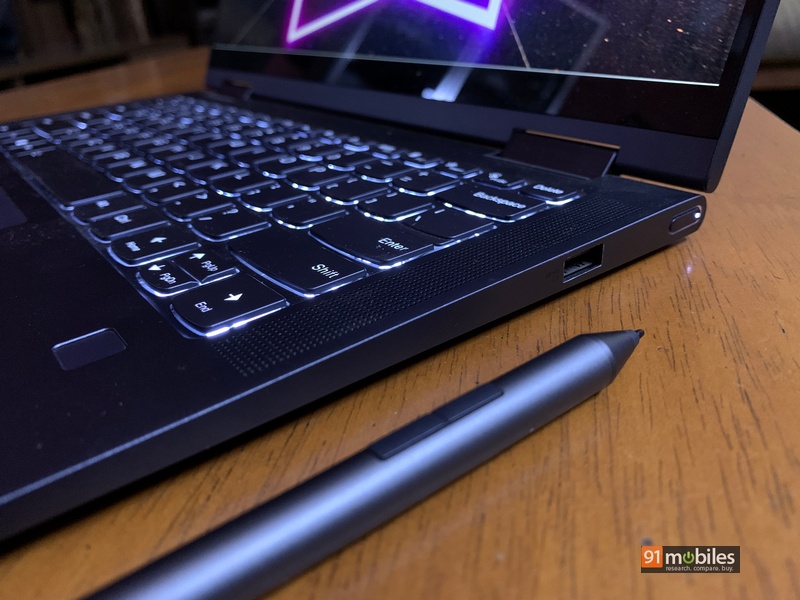 As far as the display is concerned, the Yoga 7i comes with a bezel-less 14-inch IPS LCD panel with FHD (1,080 x 1,920) resolution and touchscreen capabilities. The screen refresh rate is a standard 60Hz, and while the 300nits of peak brightness is not too shabby, I did long for more. More importantly, the laptop is Dolby Vision certified which amplifies the dynamic range, though the blacks still lack the depth of an AMOLED panel. Colours are quite punchy and sharp allowing for a vibrant viewing experience. The panel covers about 80 percent of the NTSC colour gamut which already puts it ahead of several competing products. Together with the Dolby Atmos speaker setup, watching any kind of content on the Yoga 7i was a delightful experience. 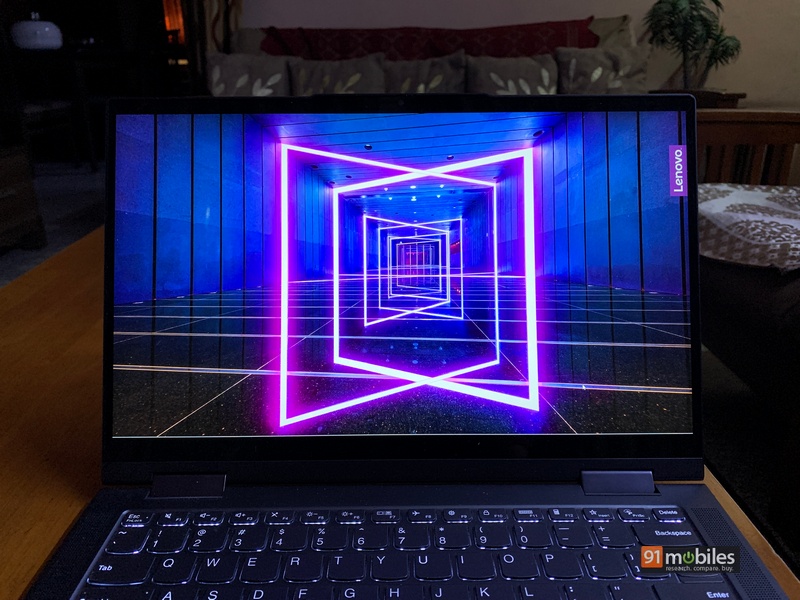 I really think that the Yoga 7i’s keyboard is one of the best in the industry in terms of its tactility and responsiveness. Except for the caps lock button, the positioning of every other key was to my liking and I got accustomed to the keyboard pretty quickly. The laptop offers a standard six-row chiclet-style setup with a decent amount of spacing. The travel was low with a soft touch initiating a response from the keys though I did like the satisfying clicks made by them. The keyboard backlight was sufficient for use in low-light conditions and the brightness had two levels of adjustments. The touchscreen input is an option for typing out documents and emails but I really prefer physical clicks under my fingertips. The touchpad is slightly smaller than what you usually get on a 13-inch device though. Even so, the surface is quite smooth to the touch and responsive as well thanks to Windows Precision drivers. Gestures worked well enough, though the fluidity seen on macOS is still lacking. 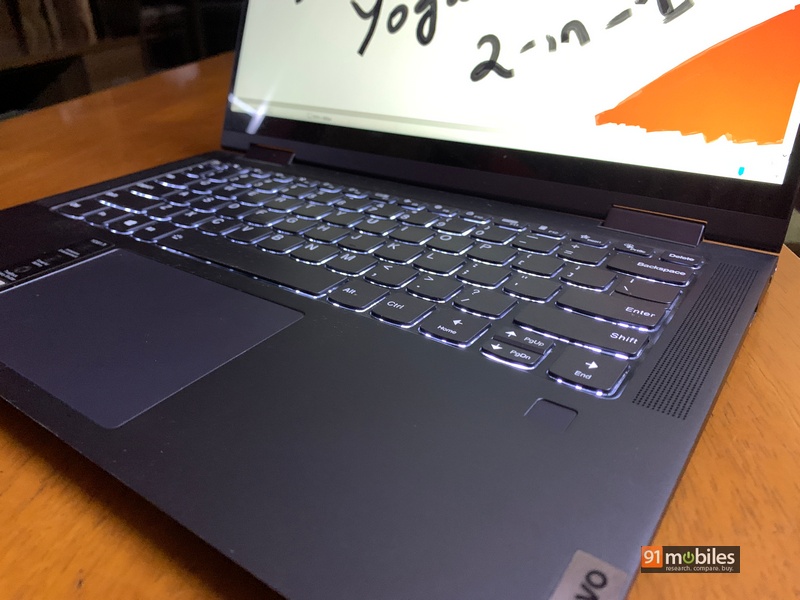 Powering the device is Intel’s Core i7-1165G7 processor which is part of Intel’s latest 11th-gen CPU lineup. You also get an i5 version of the device which is easier on the wallet. Now the relatively thin chassis, average ventilation, and a single fan are not a recipe for performance-intensive tasks, but one can still manage to get most of the usual tasks done. The Yoga 7i shows no signs of slowing down even with five windows of Chrome, each with about 10 tabs, running simultaneously while I drafted this review on Microsoft Word. The device does run relatively cool even under stress while running activities such as exporting a 4K file or playing Call of Duty Warzone on low graphics. Benchmarks also tell a similar story with the laptop churning out a score of 1,441 and 4,788 on single-core and multi-core tests for Geekbench 5. Cinebench R23 saw scores of 1,363 and 3,999 respectively for the same, which shows the new processor is a significantly faster option than the last generation of Intel chipsets. PCMark 10 measures the handling of daily workload capability and the laptop returned a decent score of 5,001. The Iris Xe integrated graphics are not meant to run AAA titles but can handle Valorant and CS: GO fine at low settings. 3DMark’s Time Spy benchmark confirms the low graphics prowess with a score of 1,586. There is 512GB of M.2 PICe SSD storage and 16GB of DDR4 RAM to contend with. Crystal Disk Mark’s Sequential Read and Write speeds for the SSD were 2,142MB/s and 1,187MB/s. The fingerprint scanner on the side enables instant authentication, unlike a few other scanners I’ve been using in this price range. The Yoga 7i’s speakers are top-notch, and I would even go so far as to say that they trade blows with the new MacBook Air. The sound is full with significant bass, a focus on the mids, and great vocals, and there’s no crackling in the sound even at the highest volumes either. It’s also worth mentioning that the Yoga 7i is compatible with Windows 11 when the update comes later this year. 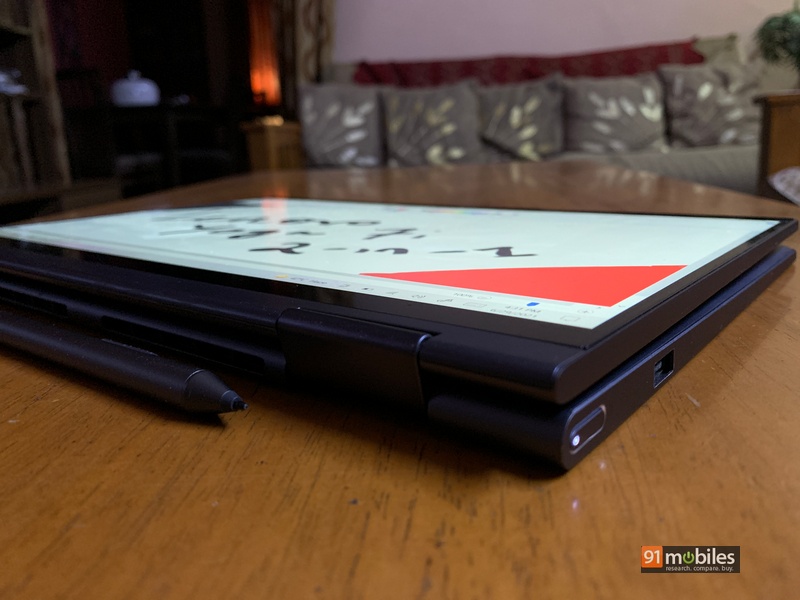 There is a beefy 71Whr battery packed up inside the Yoga 7i. Lenovo claims a battery life of 9 hours with continuous video playback which is required to get Intel’s Evo certification. In real life usage, I got about 6 hours which included a lot of heavy work on Chrome in addition to viewing 3-4 hours of OTT content. A plus point is that the charging happens via a USB-C port which should make it easier to charge your phone as well with the same charger when you are traveling. The Yoga 7i’s 65W charging solution powers up the laptop in a little under 90 minutes. 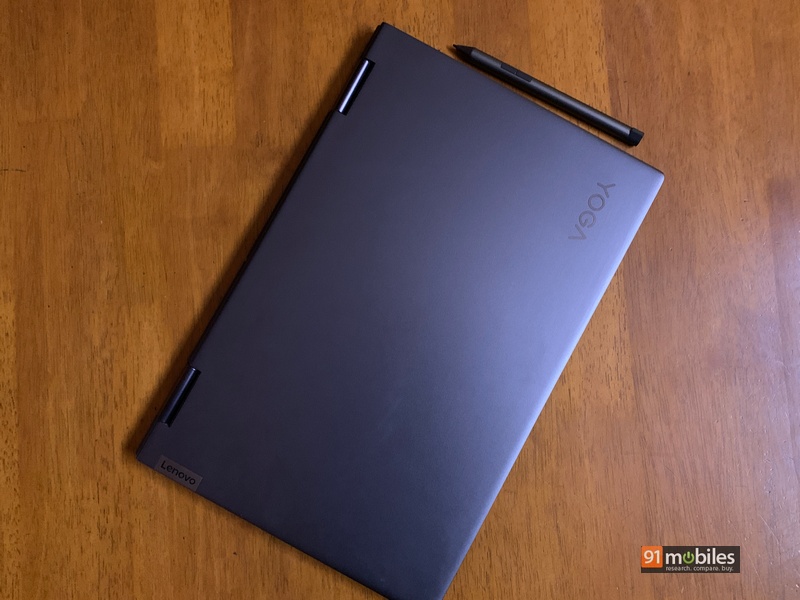 The Lenovo Yoga 7i is an impressive machine, not just due to its 2-in-1 capabilities but also considering how portable it is, while still packing a punch in the processing department. The construction is firm and a bit rigid around the hinge but it posed no problems with the opening and closing of the lid. The Yoga 7i is as light as a 14-inch laptop can get and is backed up by a decent battery to see it through a day of usage. While my review unit is priced at Rs 99,990, the i5 version of the device carries a \ price tag of Rs 85,990. I think that the Yoga 7i is a compelling everyday machine with the right balance of performance, style, and portability and as such is on top of my recommendations list. You have the option to go with bulkier contenders like the Asus TUF F15 or the Dell G5 (review) for a better gaming experience or switch to the M1 MacBook Air… but if your work doesn’t involve a lot of graphics-related tasks and you want to take the Windows route, the Yoga 7i should suffice easily.

Lenovo IdeaPad Slim 5i, Yoga 7i and Yoga 9i laptops launched in India with 11th generation Intel Tiger Lake CPUs