I have been quite impressed with the latest slew of affordable gaming laptops hitting the Indian market lately. Be it Lenovo’s Legion or ASUS’ TUF series, it has been a good year for PC gamers who don’t want to spend through their teeth. Heck, even mainstream laptop OEMs geared towards enterprise and business solutions dipped their toes in the gaming segment with enticing offerings. Case in point, Dell, which usually caters to office-goers and liaises its sub-brand Alienware to look after the high-end gaming audience.

However, Dell still has its G series of laptops which marries powerful graphical hardware to professional usage. The 2020 Dell G5, for instance, packs in  10th-gen CPUs from Intel along with the NVIDIA’s 1600 series GPUs. But, as prefaced earlier, the market is flush with compelling offerings. So can Dell’s latest stand out and make a name for itself, given its relatively high asking price of Rs 82,590? Let’s find out. 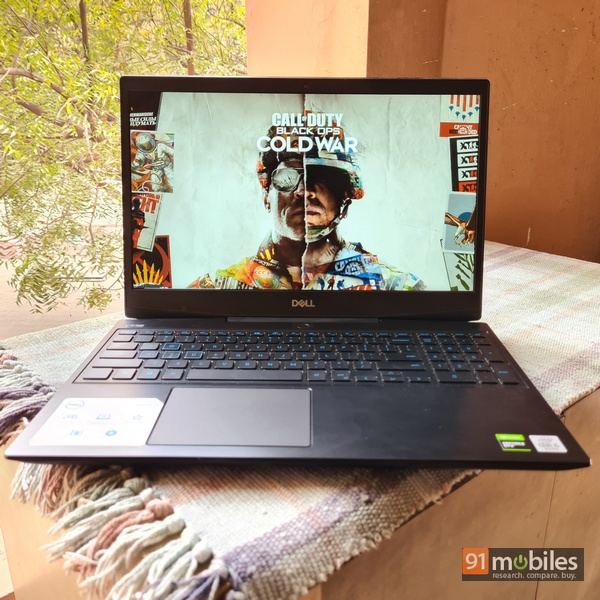 In typical Dell fashion, the G5 is a robust device with a substantially thick chassis and a rigid hinge. The laptop has taken design cues from the HP Pavilion 16 (review). As for looks, well, the plain black colour scheme of the chassis and the use of bland plastic materials doesn’t exude a gamer-y vibe, unlike the fancy ASUS TUF A15. That said, Dell has used a Premium Metallica IMR finish on the lid, which is a glittery reflecting gradient that becomes more prominent in sunlight. As for ergonomics, weighing in at 2.4kg, the G5 is heavier than most laptops in its price range. But, seeing how a lightweight design is seldom the top priority in an affordable gaming machine, I am willing to give the G5 a pass here. Towards the bottom, you will find the G5 logo inscribed just above the air vents, while the Dell branding is in its usual place, at the centre of the bottom bezel. The laptop also packs in a down-firing, dual speaker setup that is present just below the trackpad, as well as a webcam, positioned inside the top bezel of the display. Apart from that, the fingerprint sensor is integrated with the power button. All said and done, I wouldn’t say the G5 fits comfortably in my bag, but you can carry it around without throwing your back out. 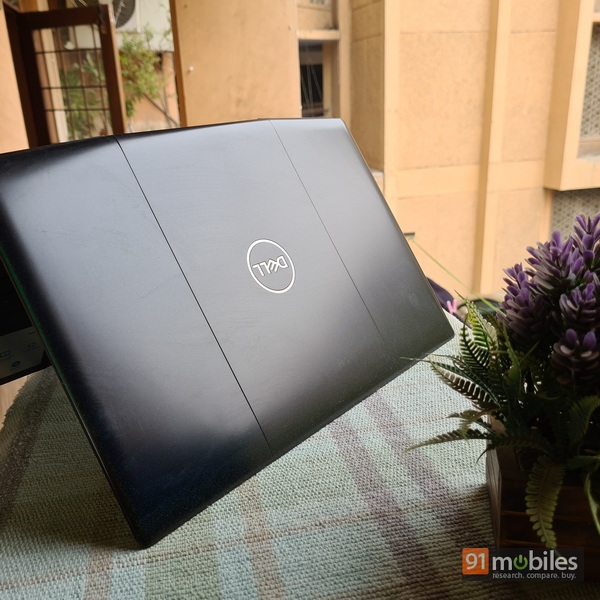 The viewing experience on the Dell G5 is carried out by a 15.6-inch LCD panel with FHD+ resolution. The display is nothing to write home about and comes toting a respectable max brightness of up to 300nits and up to 95 percent coverage of the sRGB colour gamut. Thankfully the Dell G5 offers a 120Hz refresh rate option, which is always appreciated over a higher resolution panel. For the purposes of gaming, more frames being pushed per second lends fluidity and smoothness to the gameplay. A 60Hz panel, for example, is not able to fully utilise the GPU due to its own limitations. The resulting output is considerably jerky than a 120Hz panel which could be the difference between winning and losing. The laptop also offers an anti-glare coating on the panel – commonplace on most laptops now – which paves way for a better viewing experience even when a light source is shining directly at the display. In general, the colours and saturation levels in games or media were good. However, I wouldn’t rely on G5’s panel for tasks such as colour grading or photo editing. Unfortunately, the relatively lower quality 720p webcam on the G5 is a bit of a bummer, especially given how so many users now rely on video conferencing owing to the pandemic. 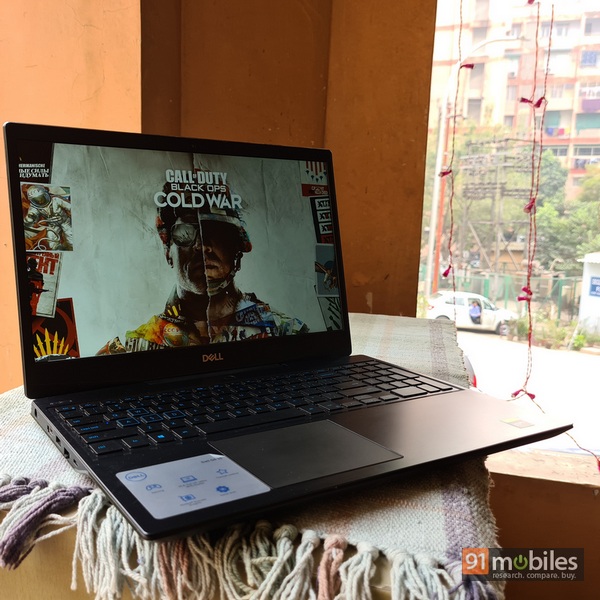 Talking about the keyboard, the Dell G5 packs in a full-sized setup complete with a dedicated numpad. The reasonably large chassis allows for the keys to be spaced out, making the deck feel less cramped compared to a few laptops I have used in the past. Backlighting is present for better visibility at night but only in a neon blue colour which has two levels of adjustable brightness. The travel on the chicklet keys is just about optimum and the response is satisfactory too. All said and done, typing on the G5 doesn’t require a steep learning curve, which I quite appreciate. As for the trackpad, it’s compliant with Windows Precision Drivers and therefore, offers speedy and reliable multi-finger gestures. The trackpad also has a slightly bigger surface area than normal, and the finish matches the body too. As for the port selection, it’s quite impressive and the machine comes with two USB 2.0 ports, one USB 3.2 port, a USB Type-C with DisplayPort support, an Ethernet port, an HDMI 2.0 port, 3.5mm headphone jack and an SD card slot. Wireless connectivity options include WiFi 802.11b/g/a and Bluetooth 5.0. 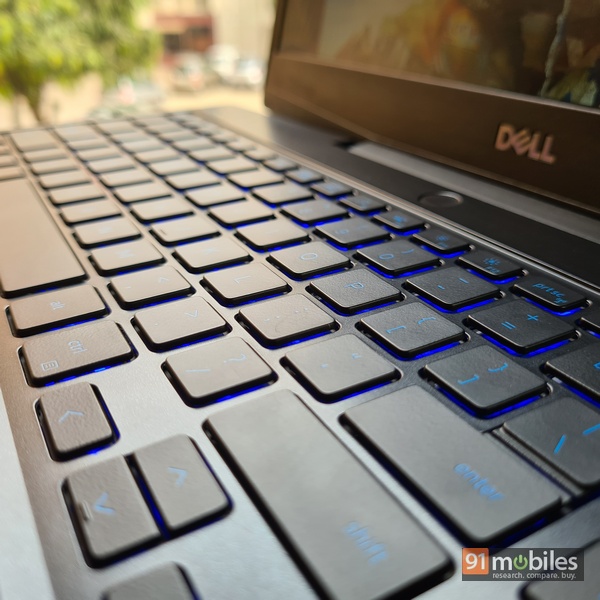 Coming to the meat of the matter, the variant I’m reviewing comes with 10th-gen Intel i5-10300H CPU which is part of Intel’s 14nm Comet Lake series. It has 4 cores, 8 threads and a base clock speed of 2.49GHz which can max out to 4.5GHz under load. There is 8GB of DDR4 RAM on board, along with 512GB of M.2 NVMe PCIe SSD storage, both of which are the base configurations for the G5. Clearly, this is a capable machine for just about any type of CPU-driven workloads. In fact, the laptop performed admirably during my stint with it and day-to-day usage was buttery smooth too. Correspondingly, anyone doing most of their work on Chrome or Microsoft Office should face no problems whatsoever. In synthetic benchmarking, the Dell G5 showed promise and scored 1,161 on single-core and 4,256 on multi-core tests on Geekbench 5. Cinebench’s R23 benchmark, which tests the CPU performance under load also yielded 5,267 and 1,031 for multi-core and single-core respectively. PCMark 10’s daily usage benchmarks also gave the laptop an acceptable score of 4,398. As for the Read and Write speeds on the SSD, the laptop net 2,324 MB/s and 1,238 on CrystalDiskMark respectively. Lastly, in order to gauge the laptop’s graphical capabilities, I ran 3DMark’s TimeSpy test which netted 3,770 points. The graphical load of the device is handled by the NVIDIA GTX 1650 Ti GPU which comes with 4GB of VRAM. Given its price point, I would’ve liked to see at least a 1660 Ti, but I digress. Regardless, for an entry-level gamer, the 1650 Ti’s prowess is sufficient. The current horde of popular FPS and battle royal titles like CS:GO, Valorant or Call of Duty: Warzone run smoothly for an hour at reasonably high settings, before the performance is throttled. I was getting anywhere from 100 – 125 fps on CS: GO and about 85 on Warzone, which is in the acceptable range. Some of the more intensive games such as Shadow of the Tomb Raider were pushing 55 fps while Far Cry 5 showed 62 fps. Performance can be boosted with the Game-Shift key (F7) which revs up the fans to its maximum. A point to note, when not wearing proper noise-cancelling headphones, the din can be quite loud. Moreover, while the unit comes with ample outputs to dissipate heat, the system can still get quite warm, even with the fans revved all the way up. Some amount of throttling can be expected at high graphics settings, so expectations should be set accordingly. Apart from that, the G5 has a set of very crisp and loud-sounding speakers. Although the setup lacks depth in the low-end and the highs are not that pronounced, but for the price, they are quite good. Windows Hello support is present on the Dell G5 which lets you unlock the device with either your fingerprint or a PIN. 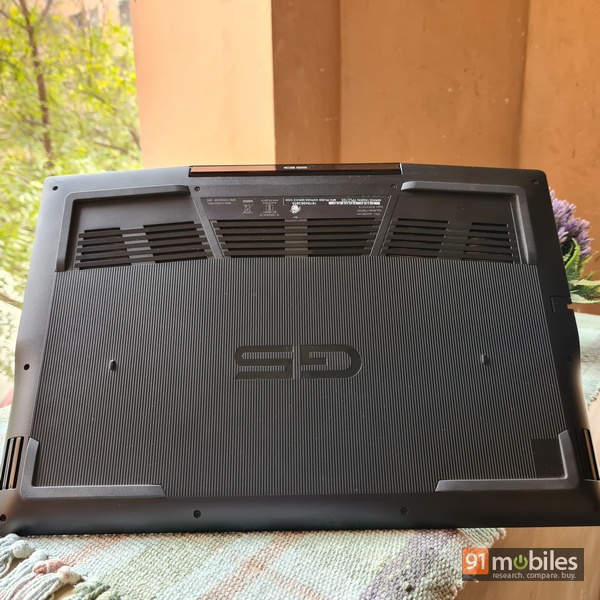 Battery-wise, the Dell G5 has a 51Whr cell with support for fast charging that can juice up the device in about 1.5 hours. Once unplugged, the laptop’s performance chops are dropped in favour of better battery life. Even so, on moderate usage (avoiding gaming or other such strenuous tasks), the laptop lasted for about 5 hours. The Dell G5 is slightly on the pricier side – not by much, but enough to make you consider other equally specced options. For instance, the ASUS TUF F15 with AMD’s Ryzen 5 4000 series CPU, 512GB SSD, 1TB HDD and the GTX 1650ti, retails for Rs 79,499. If you want to stick with team Blue, then the HP Pavilion Gaming 16 offers pretty much the same specs as the G5 while packing in a larger 16-inch display. That said, the Dell G5 stands out thanks to its excellent speakers and a good 120Hz panel. The machine is more than capable of pulling interested users into the world of gaming and is quite handy for office work too. If that is something that piques your fancy, then the Dell G5 is a good option. 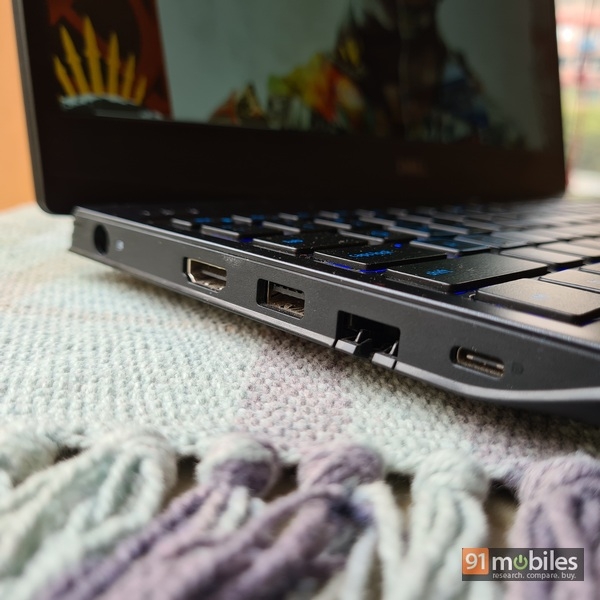