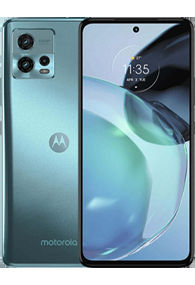 Lenovo-owned Motorola is making strong efforts to become a dominant force in the Indian smartphone market. While some of its rivals have established a stronger foothold in recent years, the Moto G series is a step in the right direction to change the tide. I have with me the company’s newly unveiled Moto G72 which is priced at Rs 18,999. The smartphone competes with several offerings from Xiaomi, POCO, and Realme, and also has a few key specs that set it apart. These include a 10-bit pOLED display which can also refresh at 120Hz and a 108MP primary camera. In this review let’s try and find out if the Moto G72 is the one for you in the under Rs 20,000 market. 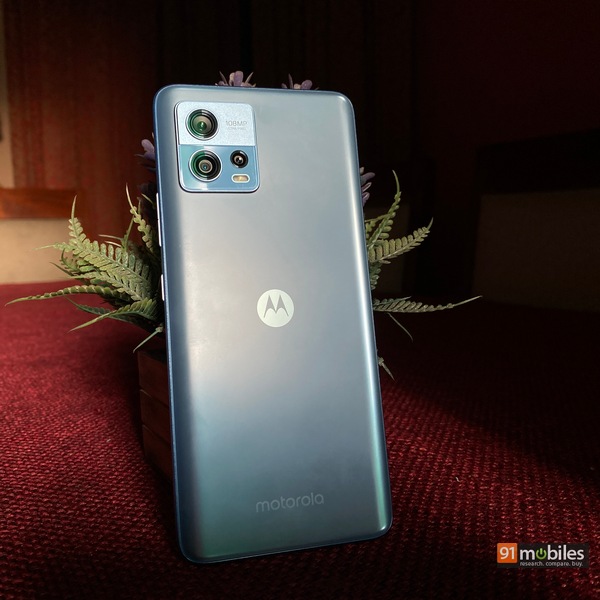 The Moto G72 is a good choice for users looking for a stellar display and who don’t want to get bogged down by a bloatware-riddled UI. Apart from that, the camera hardware, sans the macro shooter, can also be considered the device’s strong suit. However, users who wish to look for a better gaming experience should consider other choices.

The Moto G72 has a distinct difference in identity from some of the previous G series phones. Design-wise it has been crafted with subtle elegance while also retaining an air of simplicity. The matte-finish single-tone back panel and an unobtrusive triple-camera setup consolidate this feeling. Also, the slight curves on both sides provide an easy grip without cutting into the palm. 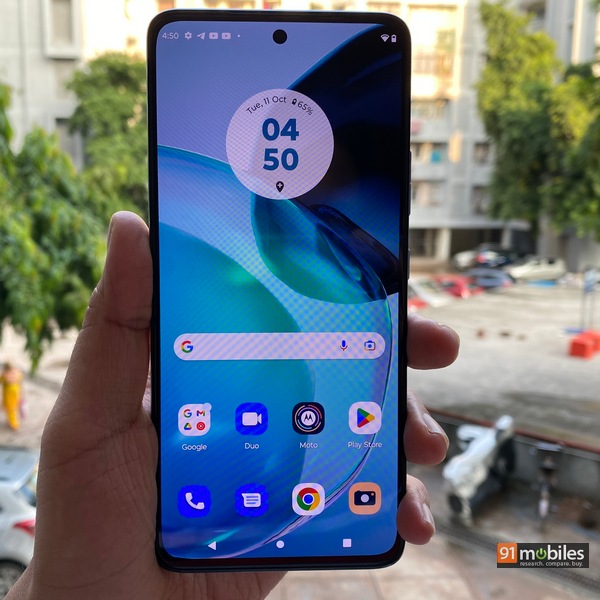 The phone is also one of the lightest in the segment weighing in at just 166g. Motorola pairs the earpiece up top with the bottom-firing speaker for stereo sound. There’s also a headphone jack for the audiophiles that prefer a wired input. The USB Type-C port finds its way toward the bottom edge while on the right you get a power button and volume controls. The entire phone has an IP52 rating to protect it from light dust and rain.

On the display side of things, the Moto G72 has a 6.6-inch FHD+ pOLED panel that can refresh at 120Hz. It wouldn’t be an exaggeration to say that this could very well be the most well-refined viewing experience currently in the segment. Not only is the 10-bit display capable of showcasing a billion colours, but the panel also is HDR10+ certified. Even so, Netflix as of now does not allow streaming of HDR content on its platform although this could be remedied in a future software update. 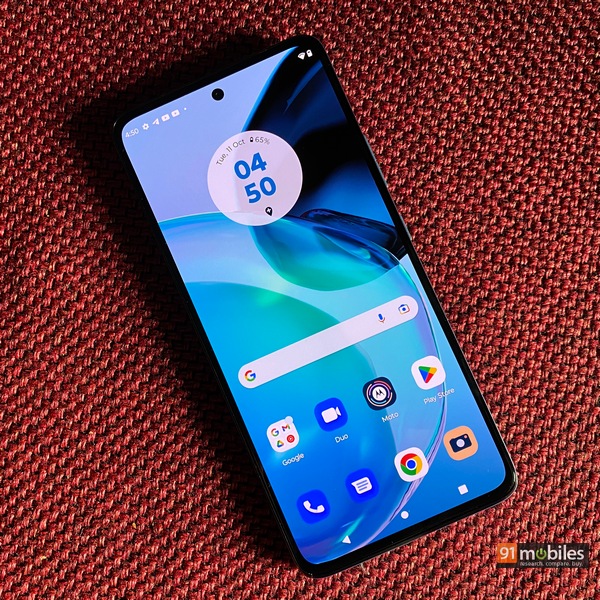 The general visual quality is very good thanks to the panel’s OLED nature. White balance is good along with contrast levels and the deep blacks accentuate the colours on display. The single punch-hole up top houses the selfie camera and I wished it would be slightly smaller in size. The 1,300nits of peak brightness make the G72 easy to access under even the harshest of sunlight.

In the camera department, the Moto G72 has a 108MP shooter which shoulders the primary image-capturing responsibility. Apart from that you also get an 8MP ultra-wide and a 2MP macro shooter. With very little sunlight over the past couple of days, it is hard to accurately gauge the G72’s true daylight capabilities. However, what I have seen in these overcast conditions is quite promising. 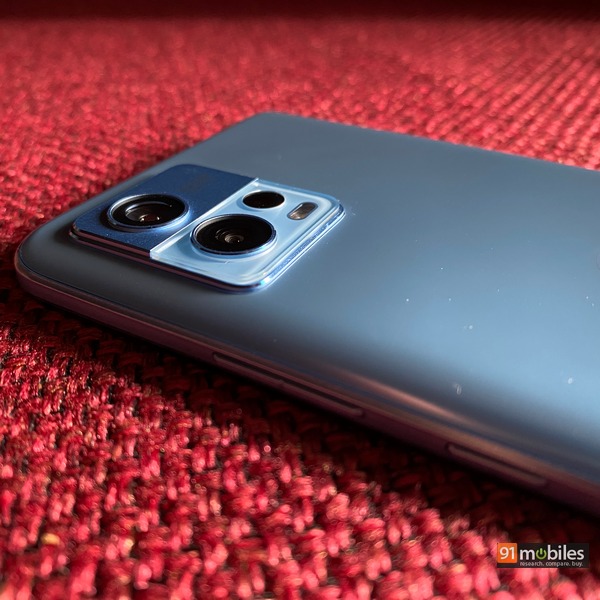 The G72’s primary camera brings in sharp details and punchy colours via its pixel-binned 12.5MP shots. I also like that highlights around the subjects are in sharp prominence and exposure is maintained well. The dynamic range is decent enough and should get better in improved lighting conditions. Shutter and focus speeds are fast although close-up objects can give the autofocus a few issues.

I was also impressed with how the sensor handles low-light conditions. Noise levels were in control and the final image looked sharp without getting overly processed. Ambient lighting around the subject does help in details but the dedicated Night mode does a fine job in its absence. Shadows remain prominent while the exposure levels are handled amicably as well. Overall, I’m more than happy with the night photography capabilities of the Moto G72. The ultra-wide shooter could do with some fine-tuning, especially with how the focus tapers off towards the edges. The sensor also prefers a much cooler colour temperature when compared to the primary sensor. As for the macro shooter, you can get halfway decent shots but only in ample sunlight. The 16MP selfie camera does a decent job of reproducing facial details and skin tones but can falter sometimes with the exposure behind me. 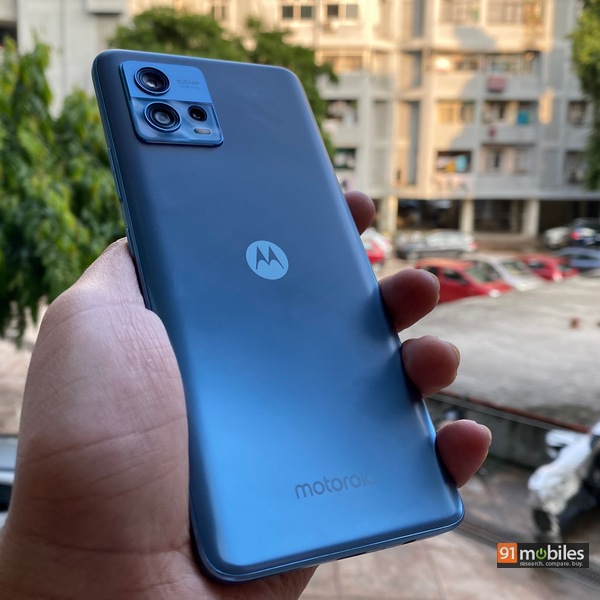 Performance is handled by the MediaTek Helio G99 SoC. This is a chipset that was introduced recently and can be found on cheaper devices as well. From my experience, the Moto G72’s processing prowess is slightly constrained relative to what the competition is offering. On synthetic benchmarking tools like Antutu, the G72 scores 370,871 while on Geekbench 5, the multi-core score stands at 1,791. Although the performance can’t be termed poor, the Moto G72 does get outdone by a few of its competitors that harbour the Dimensity 810 or Snapdragon 695 SoCs. 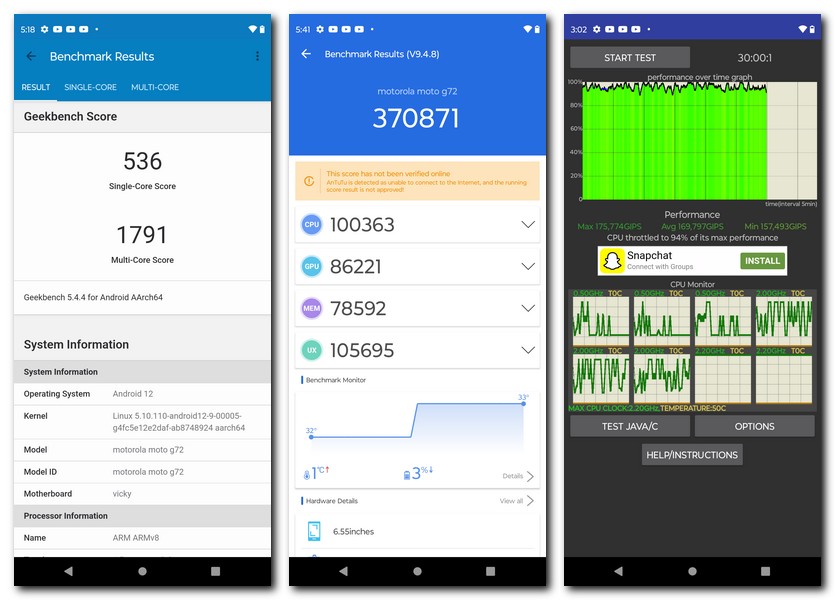 Even so, this is not to say that regular smartphone usage will be hampered in any way. The UI, app switching, browsing experience and the fluidity of a 120Hz refresh rate remain unencumbered on the G72. You will, however, face issues with tasks like intensive BGMI gaming wherein the device can only run at Ultra (45fps) with HD graphics.

In terms of memory and storage, the Moto G72 gets up to 6GB of LPDDR4X RAM and 128GB of UFS 2.1 storage which can be expanded to 1TB. The phone also has a dual-speaker setup tuned by Dolby Atmos which sounds quite good. Apart from that, the device misses out on 5G support which has become increasingly important after the service recently started rolling out in tier-1 cities. 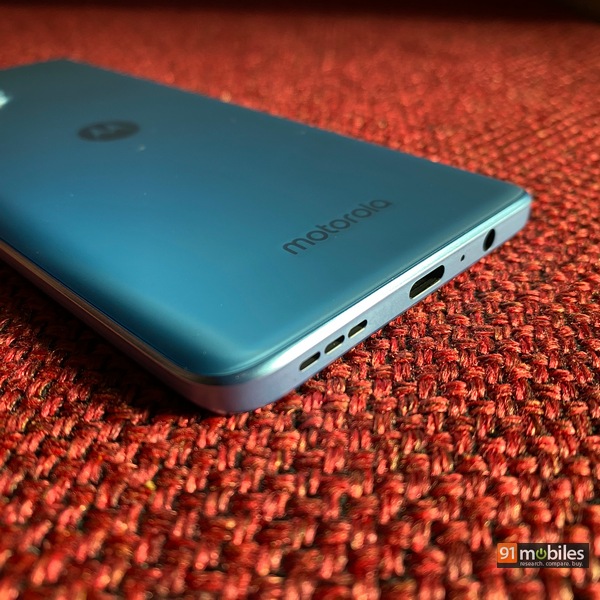 I did test out the 4G LTE network on Jio’s Noida circle and got great network speeds. The in-display fingerprint sensor also does a decent job of authenticating alongside face recognition. The software on the Moto G72 is Motorola’s MyUX skin running Android 12. The interface is generally quite clean with a few Moto apps sprinkled on top for added functionality. I prefer Motorola’s implementation over a variety of bloatware-riddled skins being peddled by other OEMs. You are also guaranteed the Android 13 update and up to three years of security updates from the company’s side.

There’s a 5,000mAh battery housed inside the device which can be charged at 33W. From my daily usage, I got upwards of six hours of screen-on time without pushing the phone to heavy GPU activity. For any normal usage, the G72 is likely to last easily for the entire day and spill over to the second day. The 33W charging can juice up the phone in under two hours. 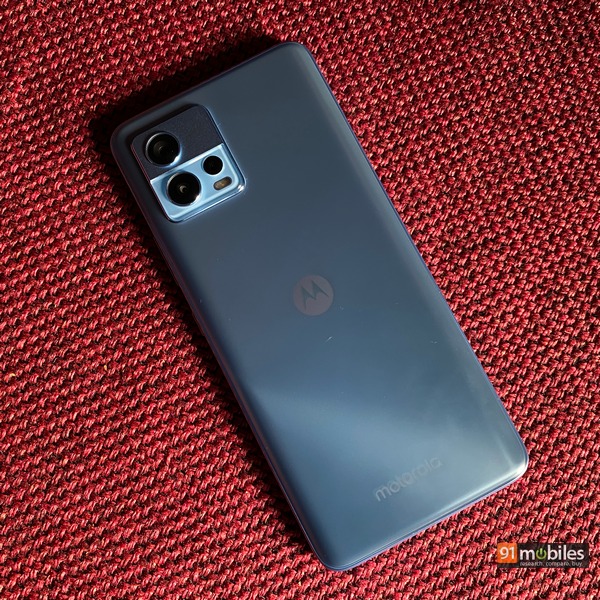 I think that the Moto G72 is a device that should be considered for an optimal viewing and software experience. The phone also has the added advantage of clicking more than decent pictures irrespective of the lighting conditions. While the G72’s performance is not best suited for heavy-duty gaming, regular smartphone usage remains optimal. In addition to that, the phone also boasts a good battery life and acceptable charging speeds. All things considered, the Moto G72 could have the potential to be your choice under Rs 20,000.