It has been almost a year since OnePlus co-founder Carl Pei left the company to start his own venture, Nothing. In the months that followed, the hype around the tech startup increased tenfold, which should come as little surprise to anyone following Carl’s career over at OnePlus. It also helped that the new enterprise had a meme-able name and by now, I am sure you’ve scrolled through your share of witty (and awful?) “Nothing” jokes too. Don’t worry – you won’t hear ‘Nothing’ of the sort here. 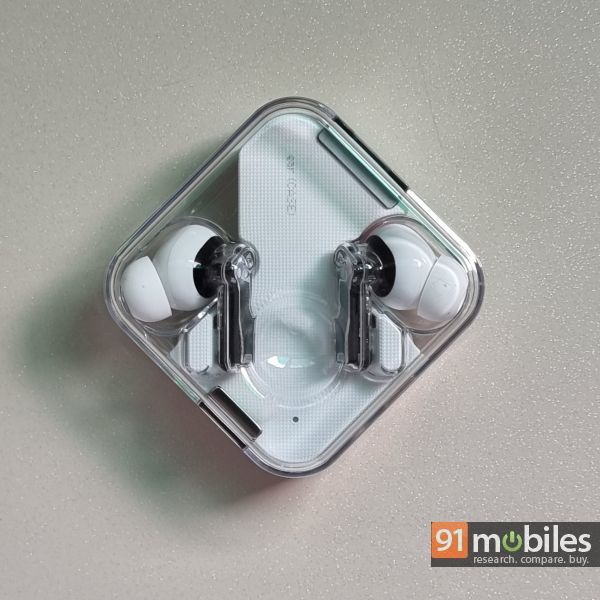 Okay, I had to get one in, but the fact remains that Nothing has built up a lot of clout online. And now, after months of teasing, the company finally has a product to show for it too. Dubbed the Nothing ear (1), the company’s first offering is a TWS headset that hopes to wow the audience with its unique design and sound signature. What’s more, the earphones have been priced rather aggressively in the country too, so in this review, let’s take a closer look at the ear (1) and see if it lives up to the company’s hype.

I won’t beat around the bush at all – Nothing has hit the ball out of the ballpark with the design of the ear (1). Unlike the herd of other TWS headsets out there, the ear (1) employs a rather unique design that has been made in a partnership with folks at Teenage Engineering. Quite frankly, I have merely glossed over the latter’s portfolio but one thing is for certain – they have a handle on designing stunning audio products. The ear (1) too, looks unlike anything else on the market and in part, employs a transparent, see-through chassis. The earbuds’ stem, for instance, ships with a transparent veneer that allow user to admire the technified guts of the headset. The company’s name can be found neatly etched on the stem too, along with complimenting red and white dots on the right and left earbud respectively. 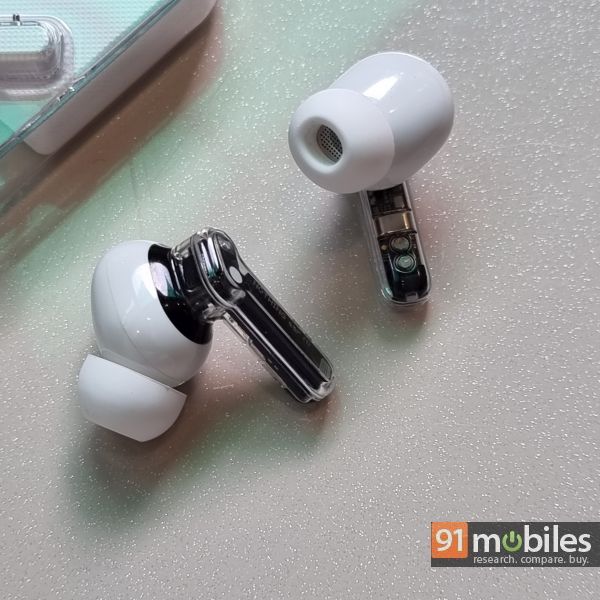 I am in awe of the unit’s two-toned colour scheme too, which really makes the design pop. What’s more, despite using different colour accents, the hues don’t feel out of place. On the contrary, they lend the ear (1) an edgy design that commands a second look. Now, granted, the pair has been constructed using plastic, but that doesn’t take anything away from the ear (1)’s aesthetics. If anything, the use of plastic ensures that the individual buds weigh a mere 4.7 grams each. Coupled with the earphone’s angular nozzles, I can confidently say that the Nothing ear (1) are among the most comfortable TWS headsets I’ve used in a while. 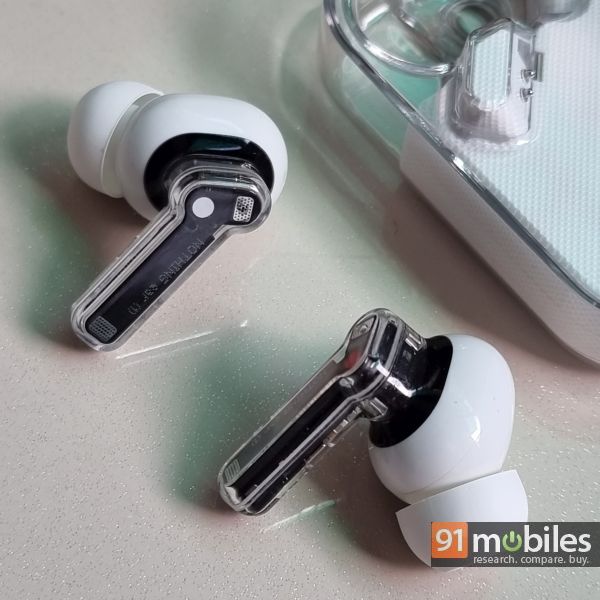 As for the case, well, it is every bit as beautiful as the earphones themselves and comes toting transparent and metal accents too. The enclosure features a USB Type-C port, supports wireless charging, and sports a physical toggle positioned beside the charging port which can be used to put the earphones in pairing mode. The earbuds are holstered inside the case magnetically, so they shouldn’t spill out if you accidentally drop the ear(1) either. My only qualm with the case’s design is that it picks up scratches like there’s no tomorrow. 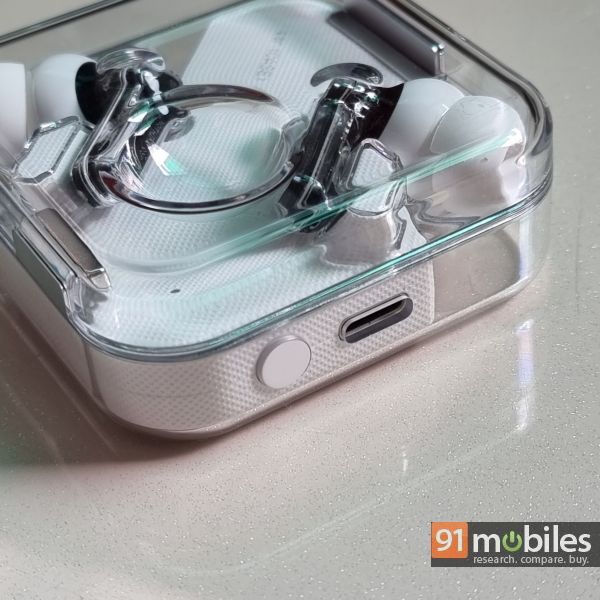 Thankfully, the earphones don’t trade function over form and ship with IPX4 certification too. Moreover, you can tap on the stem of either earbud to invoke various commands, including changing tracks and turning the ANC mode on or off. You can even variate the volume levels by sliding your finger up and down the ear (1)’s stems, and the earphones will automatically pause the music should you take an earbud out of your ear as well. Unfortunately, I couldn’t get Google’s Fast Pair working on the set. While the unit paired with my device without much hassle, it would’ve been nice to see the buds pop up on my phone’s screen the second I opened the case.

As prefaced previously, the Nothing ear (1) features touch controls that’ll allow you to control the music playback. And, with the help of the ear (1)’s companion app (also called ear (1), BTW), you can tweak the touch controls to your liking. The app, on the whole, offers a minimalistic and user-friendly UI with all the essential features, including the option to flip through the equaliser and change the different hearing modes (ANC, Transparency, etc) listed front and centre. You can also use the app to find your earbuds on the off chance you misplace them. The feature works quite well and unlike some competing headsets, the ear (1) emits a rather loud pulsating hum that should help you find them easily. 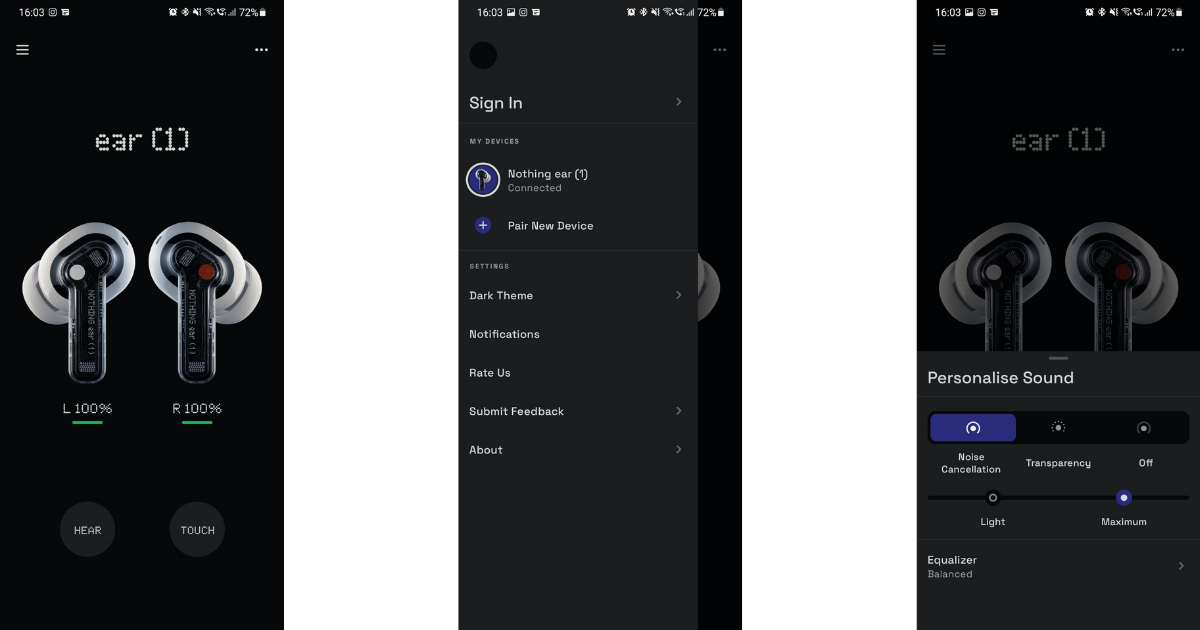 The ear (1) retained a stable Bluetooth connection to my paired devices too. I didn’t come across any audio-video sync issues either, but the earphones can only connect to one device at a time, which is a bummer.

I doubt anyone would buy the ear (1) solely for its looks so, let’s talk sound. First things first, you should know that the ear (1) is backed by a pair of 11.6mm dynamic drivers. The unit supports SBC and AAC codecs, and connects to compatible devices via Bluetooth v5.2. 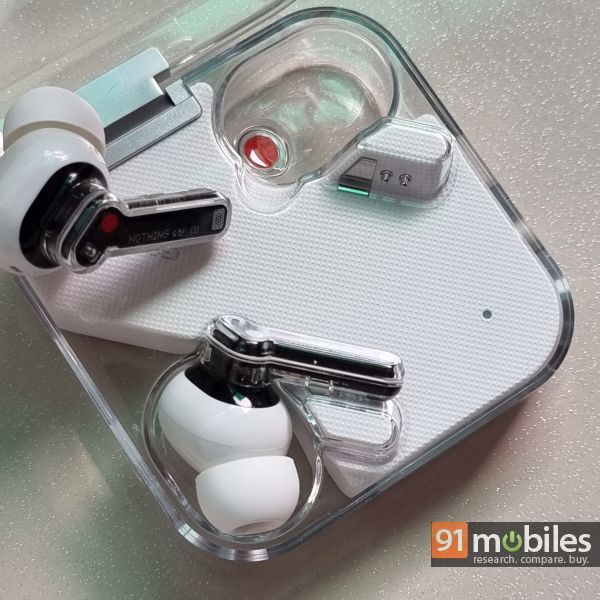 The ear (1) sounds good for the price, and I have thoroughly enjoyed my time with the pair. For the most part, buyers opting for the ear (1) will find plenty to like about the unit’s sound signature too – it’s balanced without being too analytical and on the whole, makes for a fun listening experience. However, the SS is not without its faults. For one, while the earbuds pack a punch in the low-end, the beats sound a tad flabby. So, while the beats sound voluminous enough, the impact or the thump that follows leaves a little to be desired. The sub-bass also bleeds into the rest of the frequency spectrum but Nothing has kept the slippage to a minimum here. 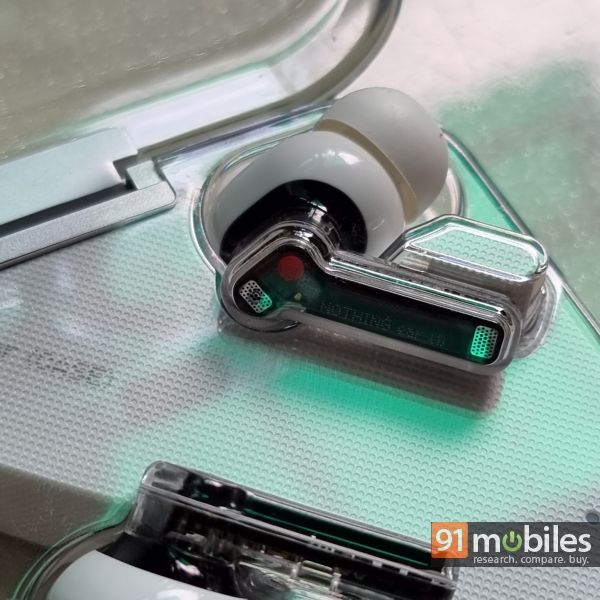 Lil Nas X’s Holiday highlights some of the aforementioned issues. In the first as well as the second verse, you’ll notice that the rumble in the low-end masks the vocals. Similarly, the slam of the beats from the get-go isn’t as tight as I would’ve liked it to be. In a similar fashion, while the earbuds do justice to the vocals from an artist, the lyrics shriek at times, owing to the earphone’s erratic mid-range spikes. The same was evident in Kanye West’s Gold Digger and the parts where the singer stretched his chords sounded a tad shrill. On the flip side, the texture of the vocals was to my liking. So, tracks like “Leave A Light On” by Tom Walker sounded quite melodious. 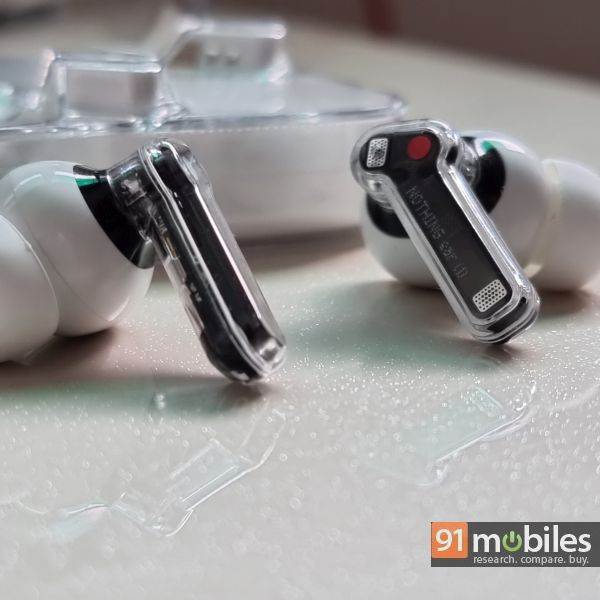 Moreover, the ear (1) has the widest soundstage on any TWS in its price range. The earphones give every frequency ample room to breathe and you’ll rarely get the impression that the pair are closed off. I was quite happy with the pair’s imaging too, which allowed me to make sense of chaotic mixes like Do I Wanna Know by Arctic Monkeys. As for the highs, the ear (1) doesn’t reciprocate energetic and sparkly highs like the Galaxy Buds+ but, the pair offers good detailing. So, instruments like an electric guitar will stand out and offer good resolution but sound a bit more relaxed.

Of course, the earphones also ship with ANC and here, the ear (1) performs admirably. The noise cancellation is strong enough to keep most, if not all ambient noises at bay and the company even allows buyers to sift through two different ANC modes. You’ll also get a transparency mode with the pair, which should come in handy if you want to be aware of your surroundings when you’re out and about. 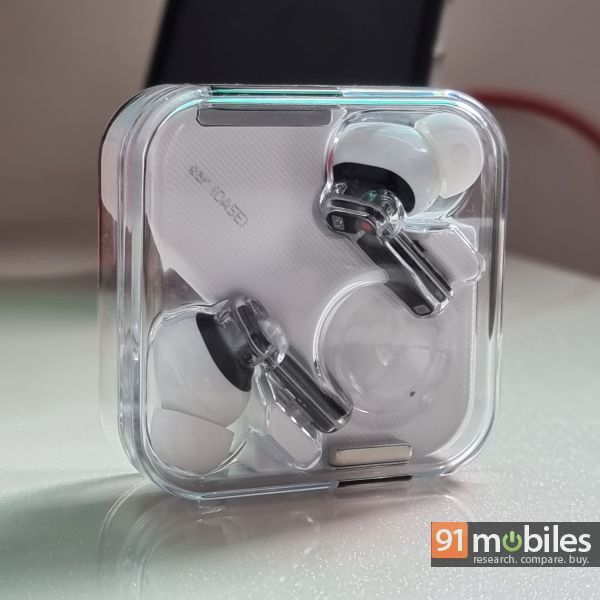 The battery backup has been great too. The company claims that the earphones can last around 5.7 hours off a single charge, with the bundled case adding an additional 34 hours to the tally. Suffice it to say, you should be able to use the earphones for a couple of days in a row. What’s more, the ear (1) supports wireless charging too, making it all that more convenient to charge when it’s out of juice.

So, does the Nothing ear (1) warrant a buy? Well, the ear (1) wouldn’t be my go-to recommendation for audio purists. You see, despite being touted as the next big thing in audio, the ear (1)’s sound signature isn’t as clinical as say, the Galaxy Buds Plus. For their asking price of Rs 5,999 though, the ear (1) brings a lot to the table. The earphones look strikingly beautiful, have been priced well, and sound reasonably good too. Factoring in the added niceties like wireless charging and ANC and the ear (1) does more than enough to get a recommendation from me.

Nothing Ear 1 launch date officially revealed, will go on sale in India through Flipkart