We don’t have to serve you a reminder of what bad air quality can do to your health. While the air quality usually dips to alarming levels in winters, many Indian metropolitan cities are already gasping for fresh air. Gurugram, for instance, failed to record one ‘good’ fresh air day for almost 15 days in August. In fact, as per a report by the Times of India (TOI), the air quality index (AQI) reported in the area during the period was worse than the same period last year. Therefore, it makes all the more sense to invest in a good air purifier. One such air purifier that I have come across recently is the O2 Cure Hulk. The device offers six-stage filtration, including UV sterilisation that is rated to kill a variety of air-borne bacteria. Stay with us as we walk you through the O2 Cure Hulk air purifier design, specifications, and performance.

The O2 Cure Hulk air purifier has a rectangular form factor, with vents placed on either side for sucking in air and a grille on top for releasing filtered air. The top edge also houses a control panel along with a small display to show the air quality of the room. The panel has a handful of buttons to power the O2 Cure Hulk on / off, select modes, adjust fan speed, set timer, and sleeping mode, among other things. If you don’t feel like reaching for the buttons, you can use the remote or the air purifier app to control its settings. More on that later. 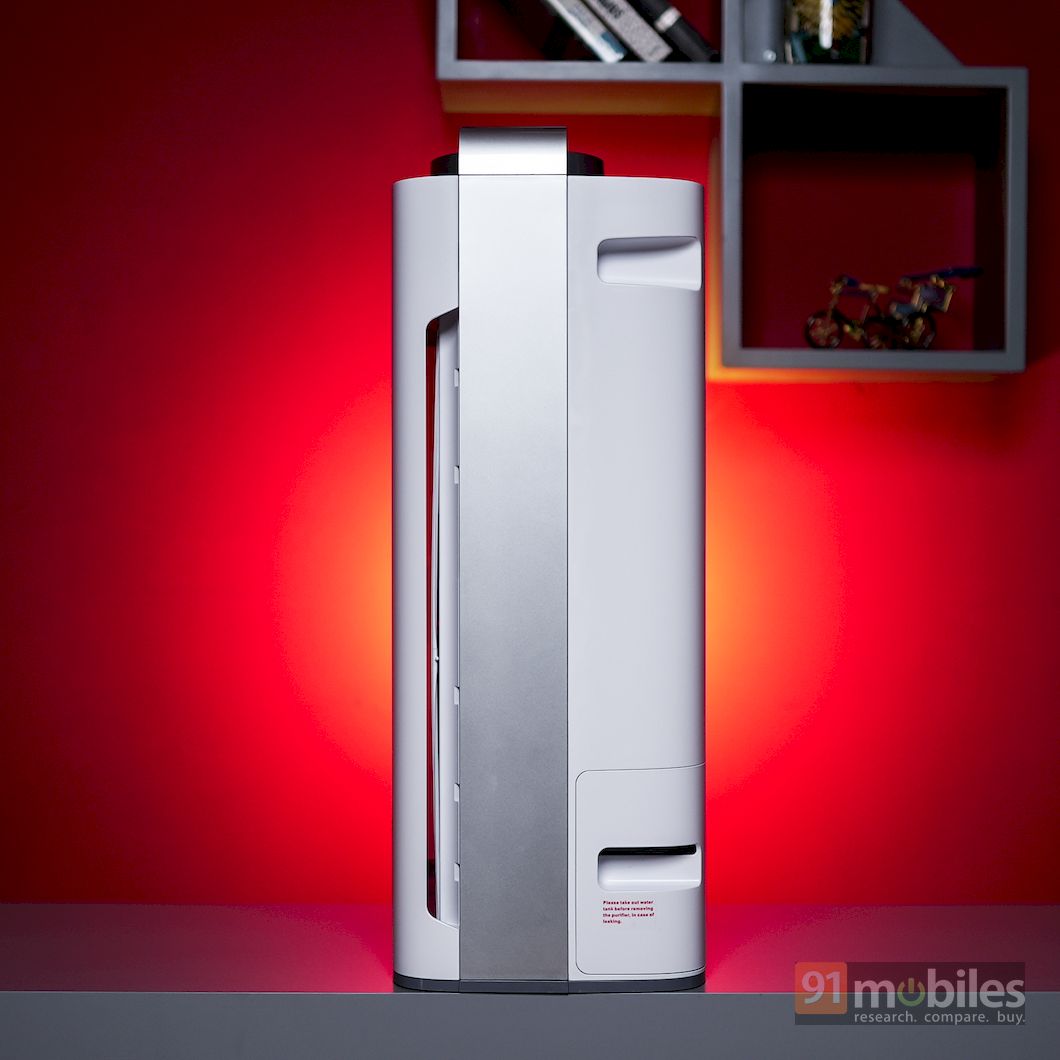 As for the design, the O2 Cure Hulk is also equipped with red, orange, blue, and green LED lights to indicate the quality of air in the room. A red light indicates that the air quality is at its worst with PM2.5 data around 161-500, while orange and blue show that the air is slightly poor, with PM2.5 in the 81-161 range. The green light lights up when the PM2.5 level is in the 0-80 range. The air quality in this range is said to be satisfactory and should pose little to no risk. Additionally, the top edge of the air purifier has a silver bar running from one side to the other. The bar can be used to lift the O2 Cure Hulk and carry it to a different room. However, I won’t suggest you put all the weight on that bar as it doesn’t seem to be strong enough, and creaked every time I used it to move/ adjust the air purifier. There is support around the back, which you can use alongside the bar to lift the device. Having said that, the O2 Cure air purifier is also slightly bulky. It weighs around 10 kgs, is 620mm in height, while the length and depth measure 400mm and 230mm respectively.

The air purifier has a particulate sensor on the left side, while on the right, it houses a water tank for humidification. On the front, you have a surface cover, removing which will give you access to the O2 Cure Hulk filters. 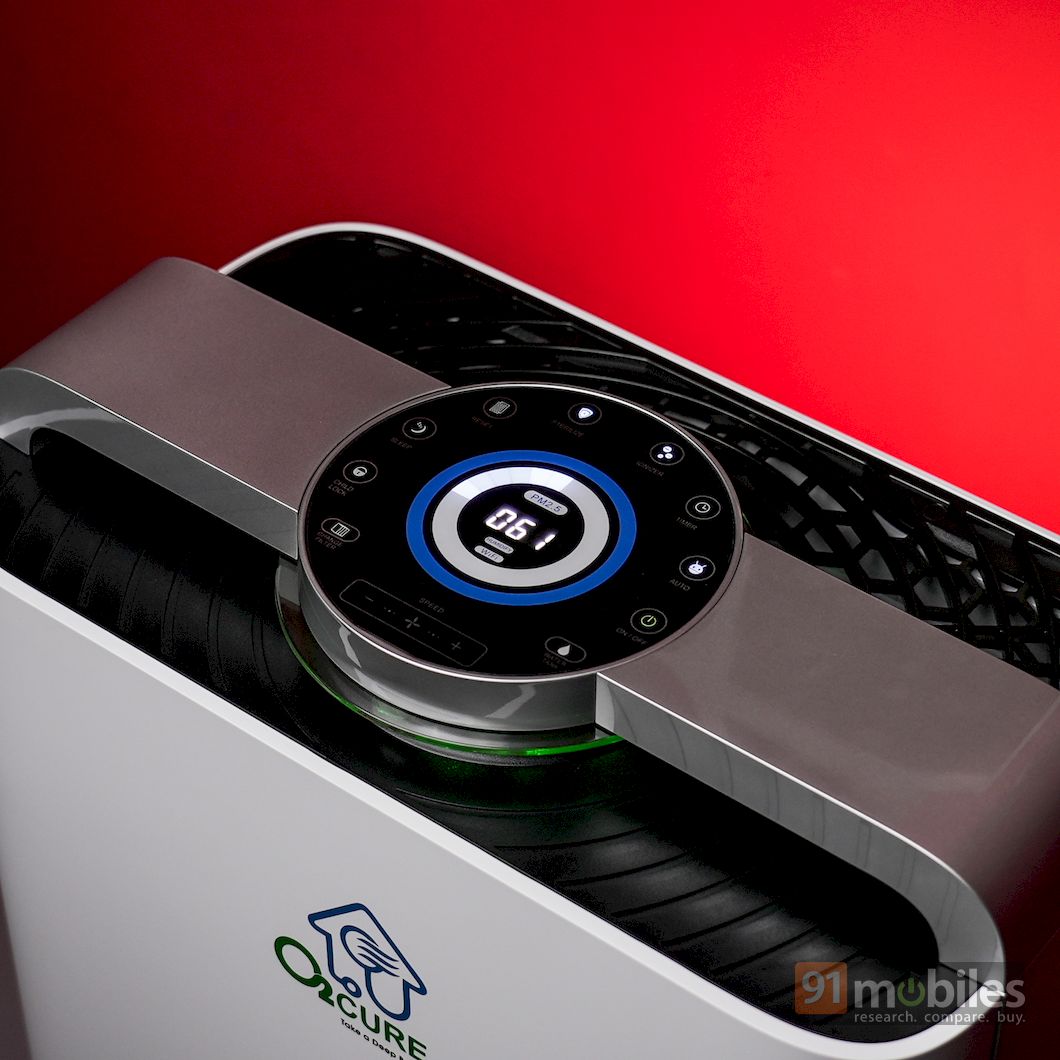 Coming to the performance, the O2 Cure Hulk air purifier uses a six-stage filtration technique. It comes with as many as four filters, including a pre-filter, a cold catalyst filter, a cellular activated carbon filter, and a HEPA filter, along with a UV sterilizer and negative ionizer to remove impurities from the air. The pre-filter is said to block out big particles (PM 10), while the cold catalyst filter is a formaldehyde buster that breaks down a variety of harmful gases. The cellular activated filter is said to remove those gases and odours from the air, while antibacterial and HEPA filters are effective against bacteria and fine particles as small as 0.3 microns respectively. The company claims that the HEPA filter in the Hulk doesn’t let dust, bacteria, fungi, viruses, allergens, and other tiny particles that are visible to the naked eye pass through. The filter is said to have a filtration rate of 99.7 percent. 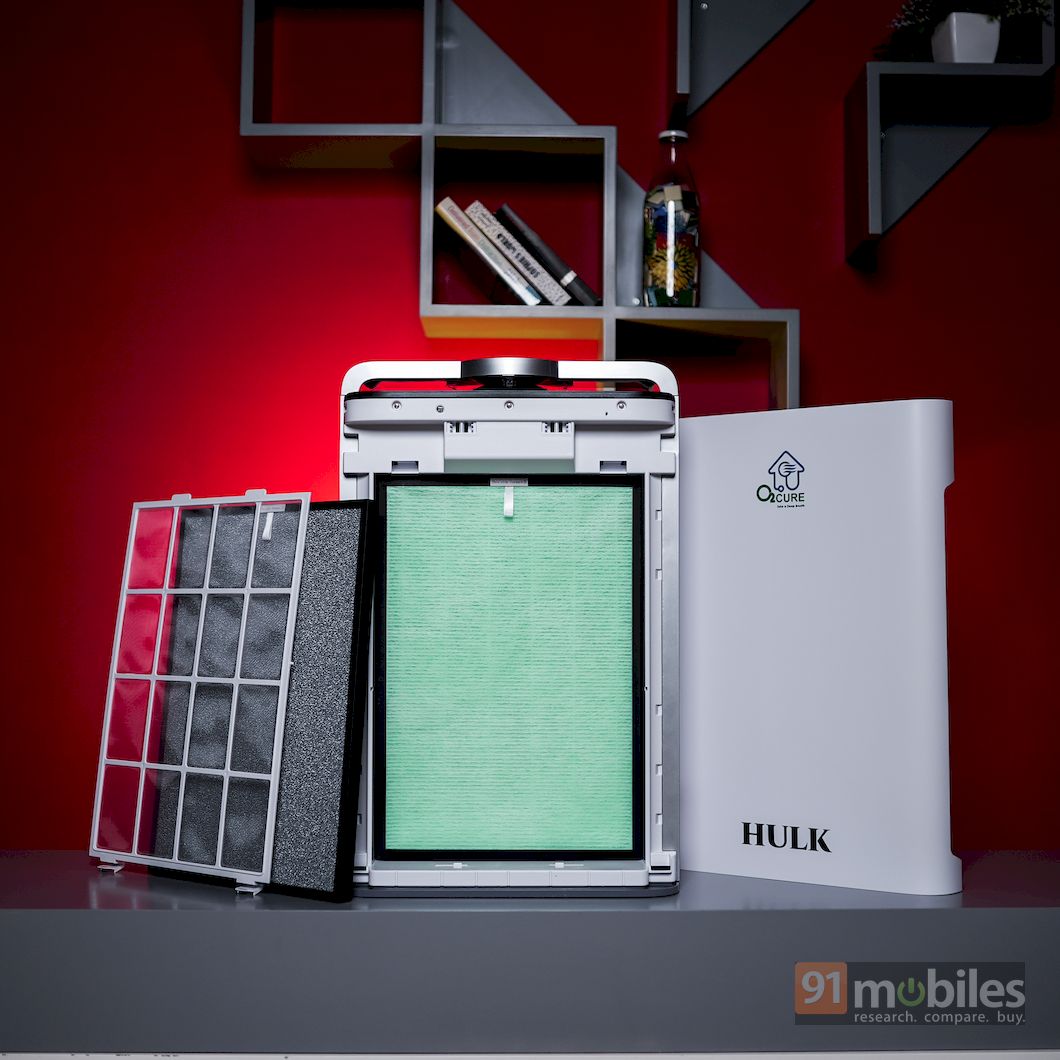 The UV sterilizer and negative ionizer are aimed to kill bacteria and remove ultra-fine particles respectively. You can manually turn them on and off via remote or controls onboard. As for the humidifier filter, it works automatically. If the water is added into the tank, the company claims that the O2 Cure Hulk can detect humidity in the room and generate steam accordingly to maintain optimum moisture levels in the air during the dry season. It’s said to work better when the machine is operating at a higher gear. Additionally, if the water level becomes low, the indicator light will flash while the machine continues working normally.

The O2 Cure Hulk is capable of detecting the bad air quality in its surroundings. I tested at my home when some renovation work was going on. In auto mode, the machine would speed up its operation whenever there was dust in the air. And thanks to the built-in display and AQI LED indicator, you get to see the PM 2.5 levels and improvement in the air quality in real-time. The speed at which the O2 Cure Hulk cleans the air depends on the room size. The machine has a CADR (Clean Area Delivery Rate) of 500 metric cube/ hour, which means it’s suitable for areas as big as 850 square feet. I used the product in my bedroom, which has a carpet area of 150 sq ft. There it took around 5 minutes on average to bring the PM 2.5 level from over 100 to 15-20. The timing also depends on the movement in the room and the number of people present. If a lot of people are entering or leaving the room, the air purifier is going to take more time to clean the air. 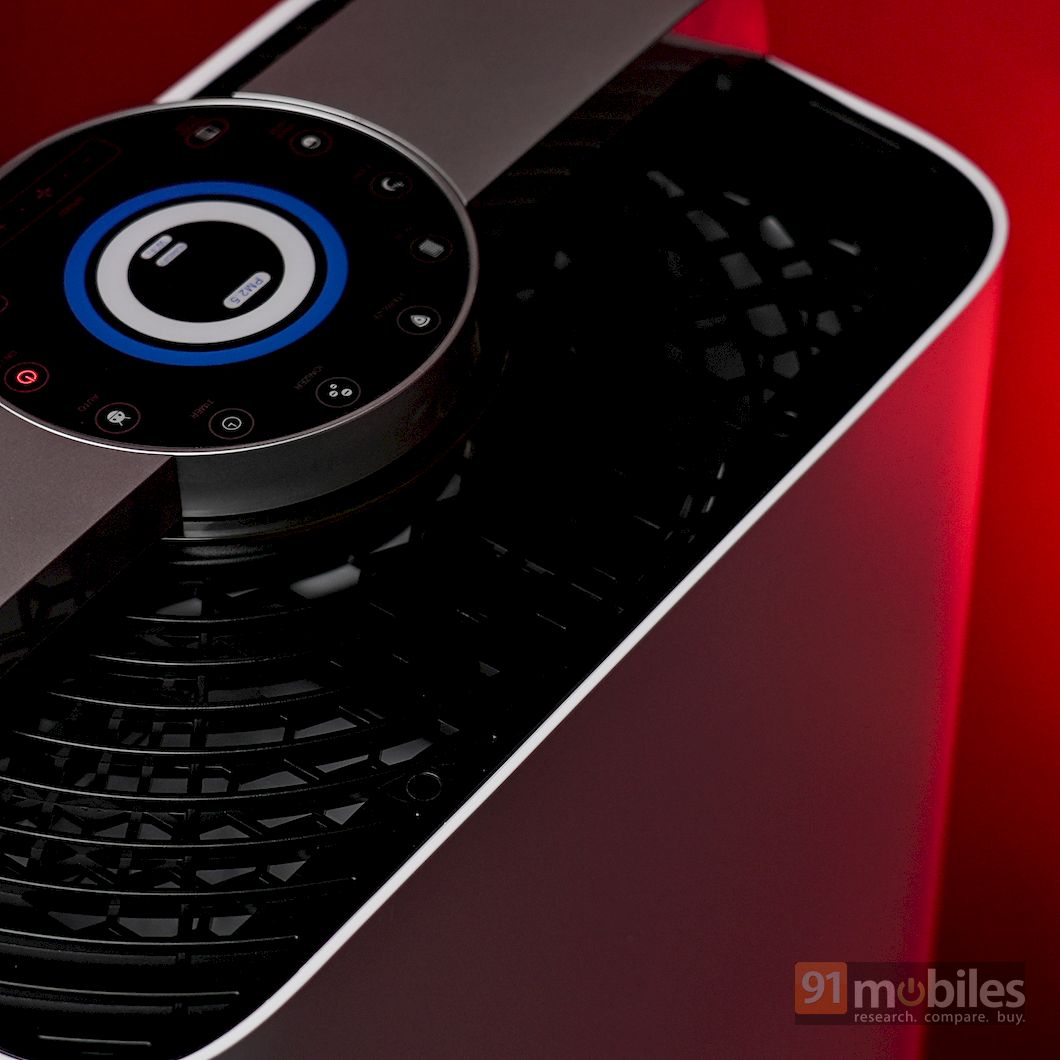 The Hulk air purifier keeps UV light and ionizer filters up and running in auto mode. Additionally, the mode automatically detects the lighting in the room and turns on the sleep mode automatically when it’s dark, turning the display and indicator lights off while the air purifier continues to function with minimum noise. You can touch anywhere on the control panel of the machine to light it up again or use the remote / app to adjust its settings. As with any other purifier, the Hulk also makes some noise, which is not disturbingly loud when powered on in the auto mode. This is because the device cleans the bad air in the surroundings, but once the air gets cleaner and the PM 2.5 level goes down, the air purifier goes silent. 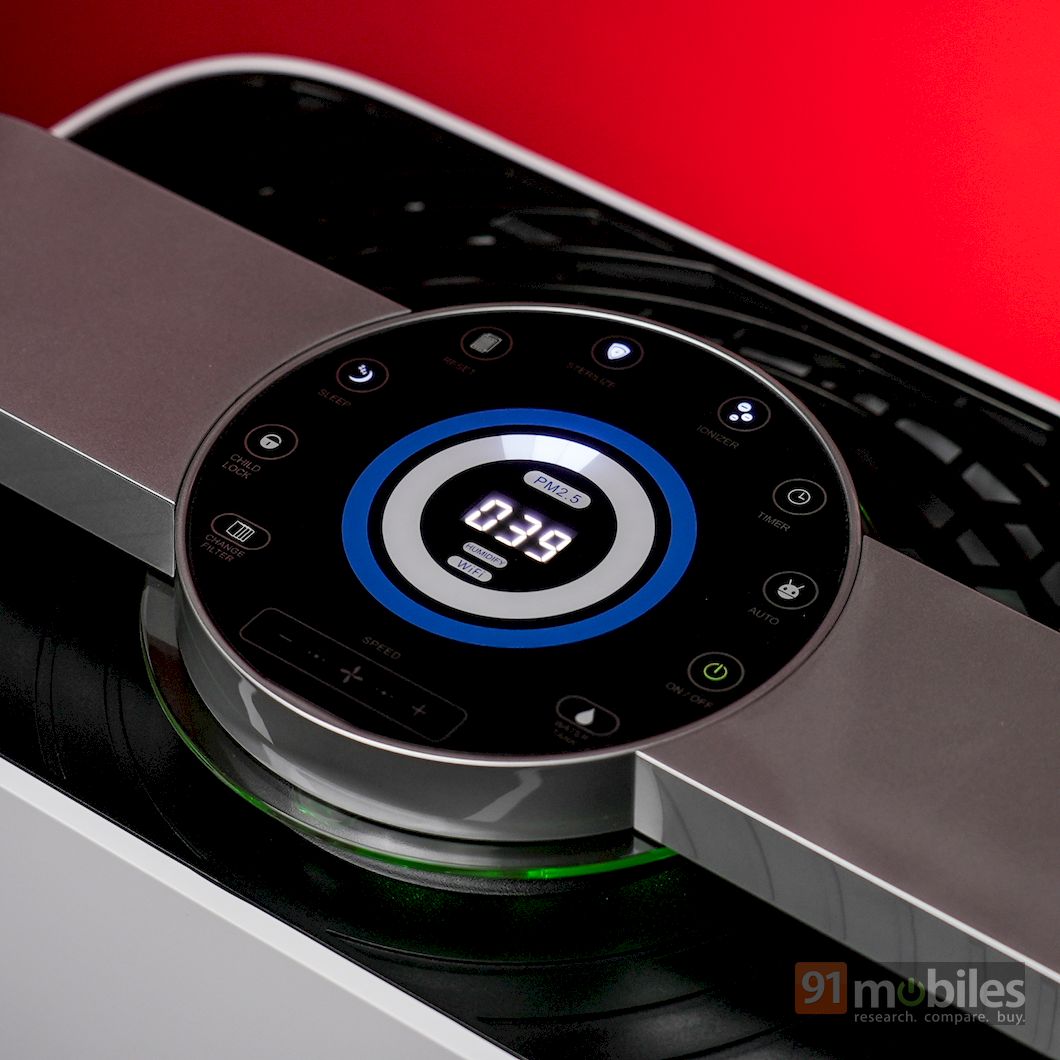 In addition to the auto mode, the O2 Cure Hulk also has a manual mode. The mode, as the name would suggest, allows you to adjust the speed of the fan, turn on / off UV and anion filters, and enable sleep mode manually. The machine noise in the manual mode depends on the speed at which fans are rotating. The higher the fan speed, the more noise O2 Cure Hulk is going to make. Heads up: at max speed, the air purifier gets pretty loud.

The HEPA, cold catalyst, antibacterial, and cellular activated carbon filters are said to have a life of a year on average. After that, you will have to purchase new filters from the company, and the full set would cost you Rs 9,999. The pre-filter can be cleaned with a vacuum cleaner or running water (the company suggests that it should be done twice per month), while the UV and anion filters have a validity of lifetime. However, when you hear the machine produce a creaking sound, use a small paintbrush to clean the anion emission head placed below the air outlet grille atop.

O2 Cure advises users to keep the device approximately 30cm away from the wall or object and wipe the lens of the particulate sensor with a cotton swab after removing the cap once every two months for efficient functioning. The air purifier has a child lock that disables all other buttons and prevents accidental touches. Press the child lock button for 4 seconds to quit this mode. 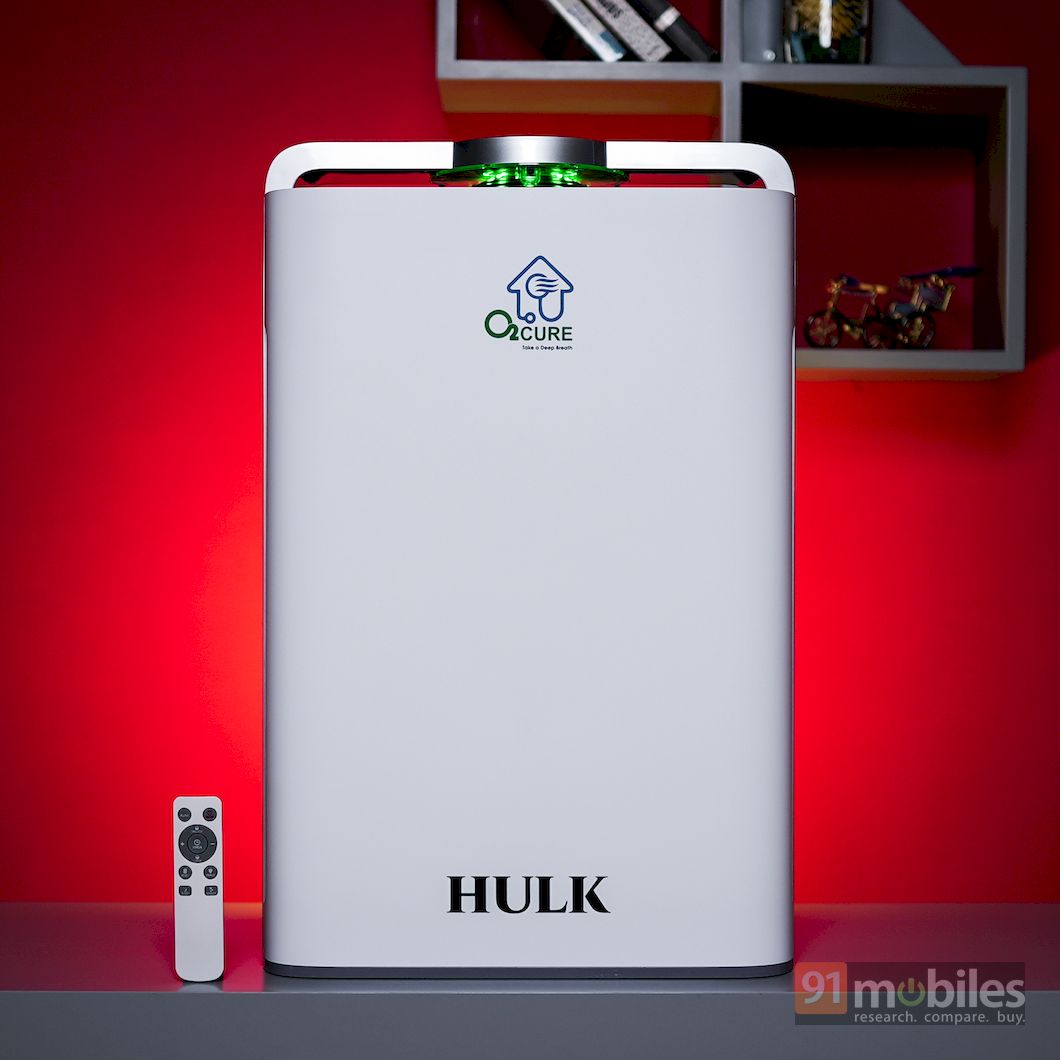 The O2 Cure Hulk air purifier connects to your smartphone using the Smart Life app, which is available for download on both Google Play Store and App Store. The company claims that the app can be used to control the air purifier remotely and get real-time data on the air quality. However, I had trouble pairing the air purifier with the app. Even with all the settings enabled, the machine just wouldn’t pair with the app on both iOS and Android devices. I’m not sure whether it was a software or hardware issue. Having said that, the O2 Cure Hulk remote works just fine. It can send the signal to the air purifier from anywhere in the room.

The O2 Cure Hulk is priced in India at Rs 28,499. This puts it up against some of the popular air purifiers in the segment, including the bladeless Dyson Pure Cool Link. The Dyson air purifier is sleek, compact, Wi-Fi-enabled, and currently selling at Rs 27,900 on Amazon.in. However, the machine only comes with Hepa and activated carbon filters. The O2 Cure Hulk, on the other hand, brings all that along with activated carbon, humidifier, cold catalyst, UV light, and anion filtration to the table.