“Our take on Realme’s latest budget entrant – the Realme 3i”

After years of upholding its status as the budget king, Chinese tech giant Xiaomi’s Redmi series seems to have found a match in Realme. Since its inception, Realme has offered one solid smartphone after the other, and the company hopes to be the usurper to Redmi’s throne in the budget smartphone segment. 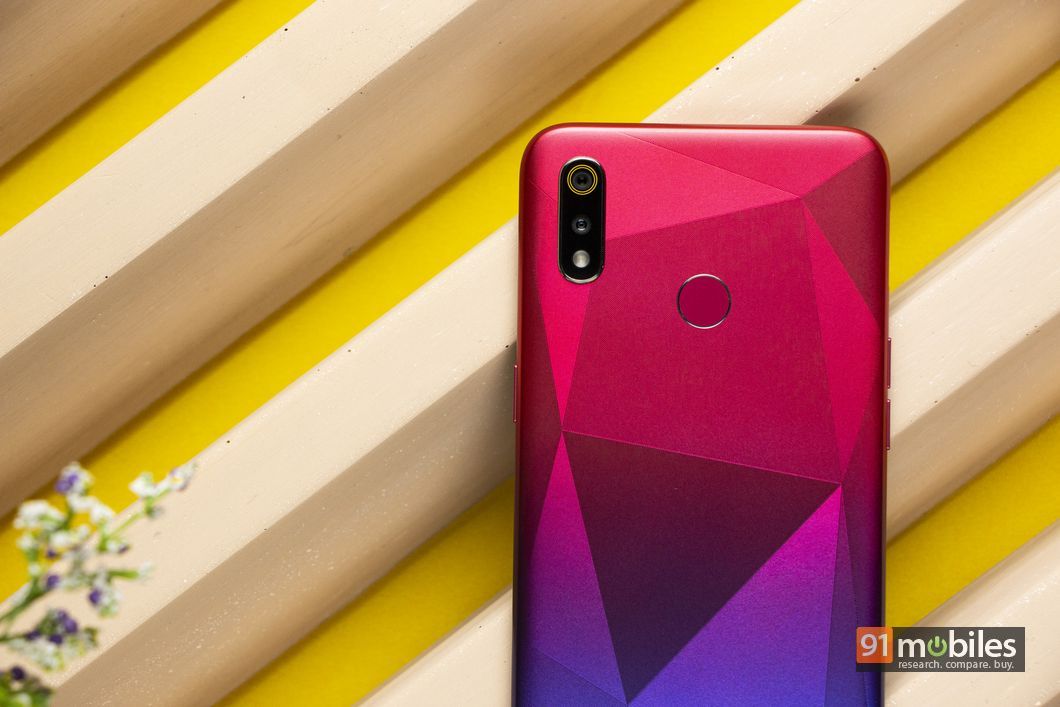 Recently, the brand announced two new devices in the segment in the form of Realme X and the Realme 3i to take on similarly priced offerings from Redmi’s stables. I’ve spent the better part of a week with the latter and in this review, I’ll be answering all your burning questions about the Realme 3i.

How does it look and feel in the hand?

The Realme 3i takes most of its design cues from the Realme C2 (review) and the device has been constructed in entirety using plastic. Furthermore, akin to the C2, the Realme 3i also ships with a diamond cut pattern on the back which feels supremely nice to the touch. 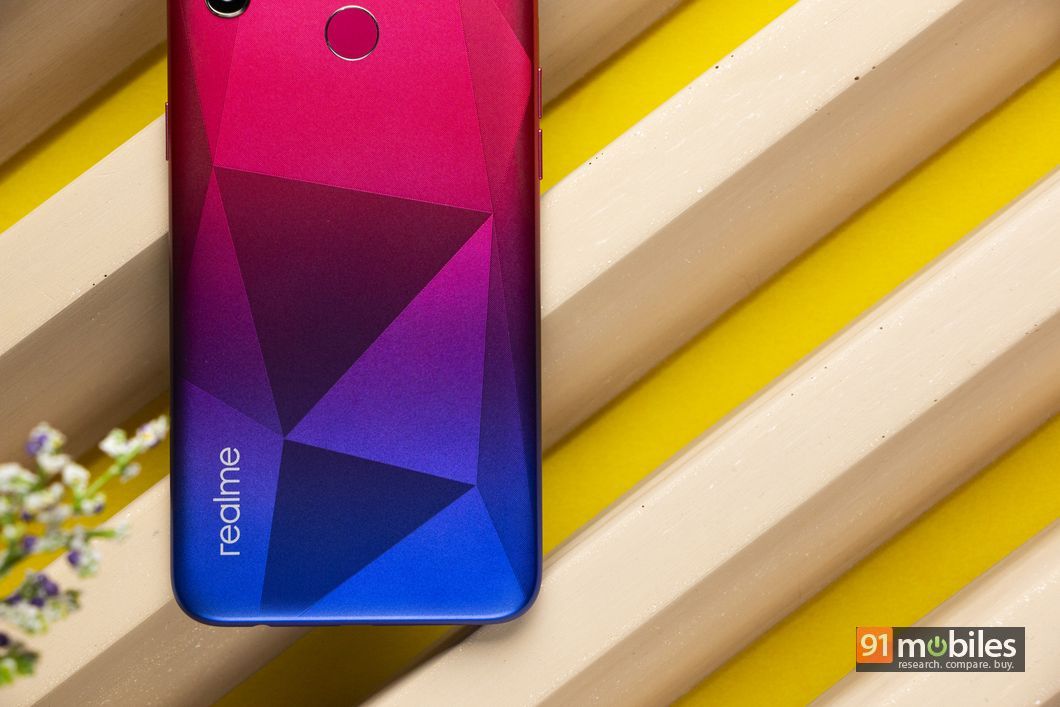 The pattern is slightly embossed too and it features laser-etched textures slanting at different angles which give the phone a distinctive in-hand feel. You can even choose to pick the device in one of three different colours and all in all, Realme has done a darn good job with the 3i’s design.

Does the phone have a headphone jack and a fingerprint sensor?

Yes, it does. The Realme 3i features a 3.5mm headphone jack towards the bottom which should let you connect any old earphones you have lying around. As for the fingerprint sensor, the device doesn’t ship with an in-display unit and instead, opts for a capacitive sensor towards the back. That said, the fingerprint sensor is extremely quick and accurate, and I didn’t face any issues unlocking the phone during my week-long stint with it. 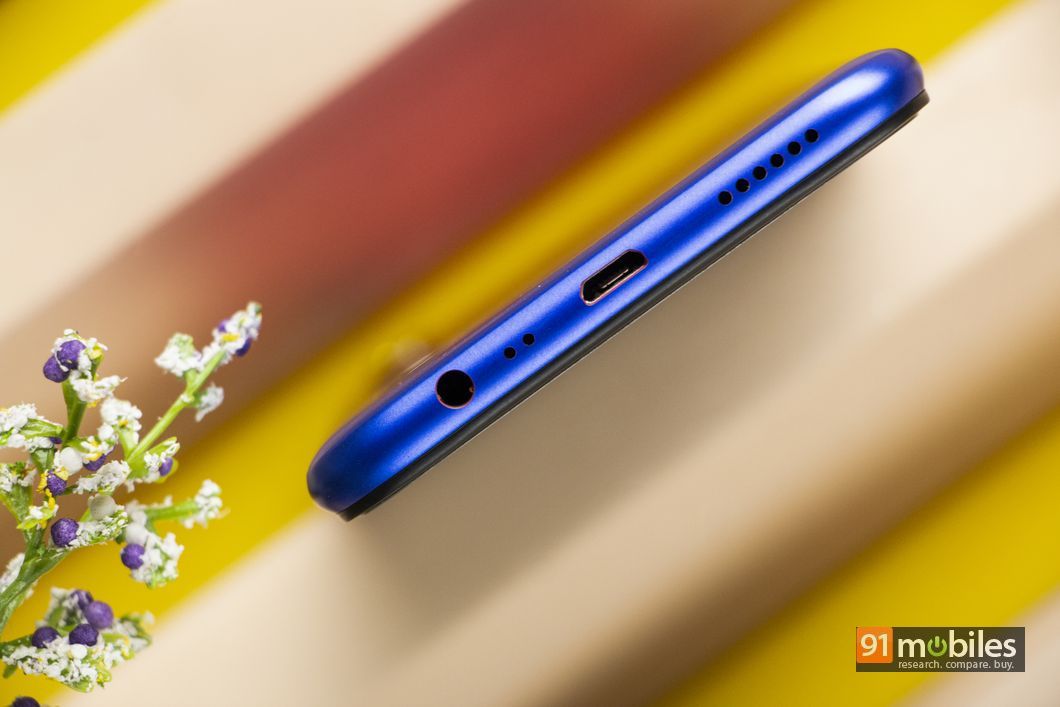 It’s noteworthy that the Realme 3i also offers face unlock as another means to unlock the phone. The software worked well during the day, and I could comfortably unlock the 3i just by glancing at the front-facing camera. The unlocking animation is swift, and it takes the phone less than a second to recognise a registered face. At night, however, the device took a couple of tries to identify my face properly.

Is the phone one-hand friendly?

In a nutshell, yes. Although the phone offers a massive 6.2-inch panel, it’s not extraordinarily tall or wide, thanks to the sleek bezels bordering the display. Moreover, unlike most glass-back devices, the texture on the back of the phone works wonders for the grip too. 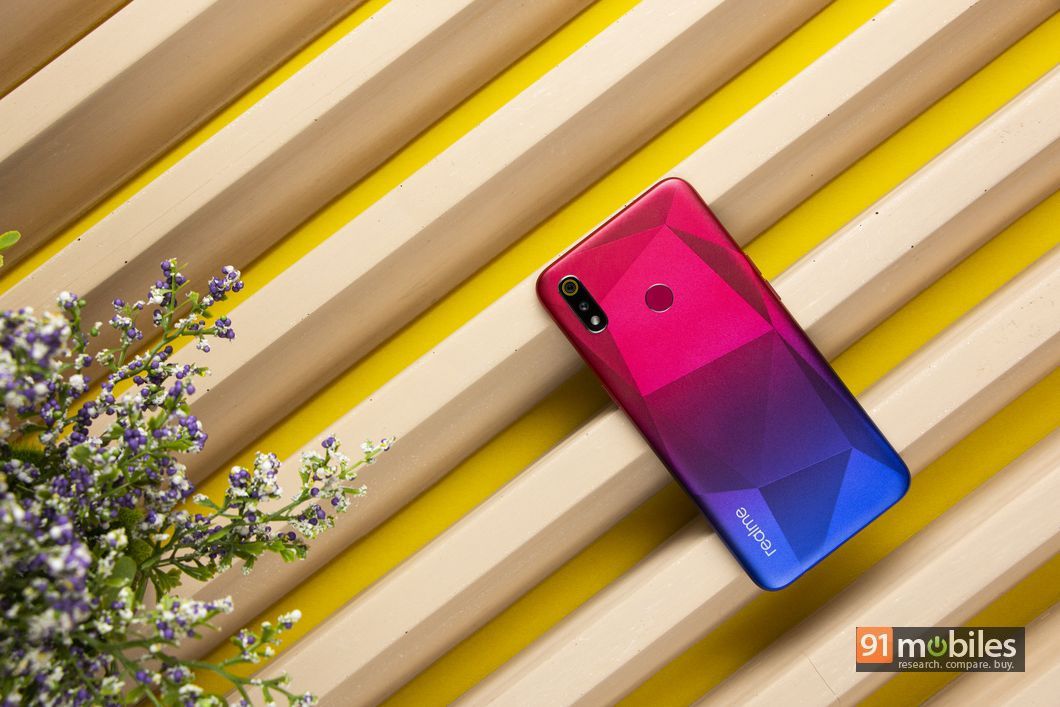 It also helps that the company has bundled numerous gestures with the phone’s software, which make it easy to navigate around the handset’s UI. I’ll talk more about the handset’s software in a bit but rest assured, you should be able to comfortably operate the Realme 3i with just one hand.

Does the Realme 3i ship with a USB Type-C port?

As good as the design of the phone is, the handset still ships with an archaic micro-USB port, which is a bummer. The device somewhat makes up for it by offering a beefy battery, but I’d still have liked to see the newer USB port on the phone. In fact, during my recent trip to Taiwan, I had to go through a lot of trouble to source a micro-USB cable for the phone.

What is the display resolution?

As I mentioned previously, the Realme 3i ships with a 6.2-inch, bezel-less display. The panel canvases over 88 percent of the device’s frame, sports HD+ resolution and ships with a dewdrop notch. While I would’ve liked to see a higher pixel density on the phone’s screen, the Realme 3i’s display is more than serviceable. Since the phone ships with a dewdrop notch, streaming video content or reading articles on the phone is an absolute treat. The display gets plenty bright too, so I didn’t face any problems using the phone when it was sunny outside. 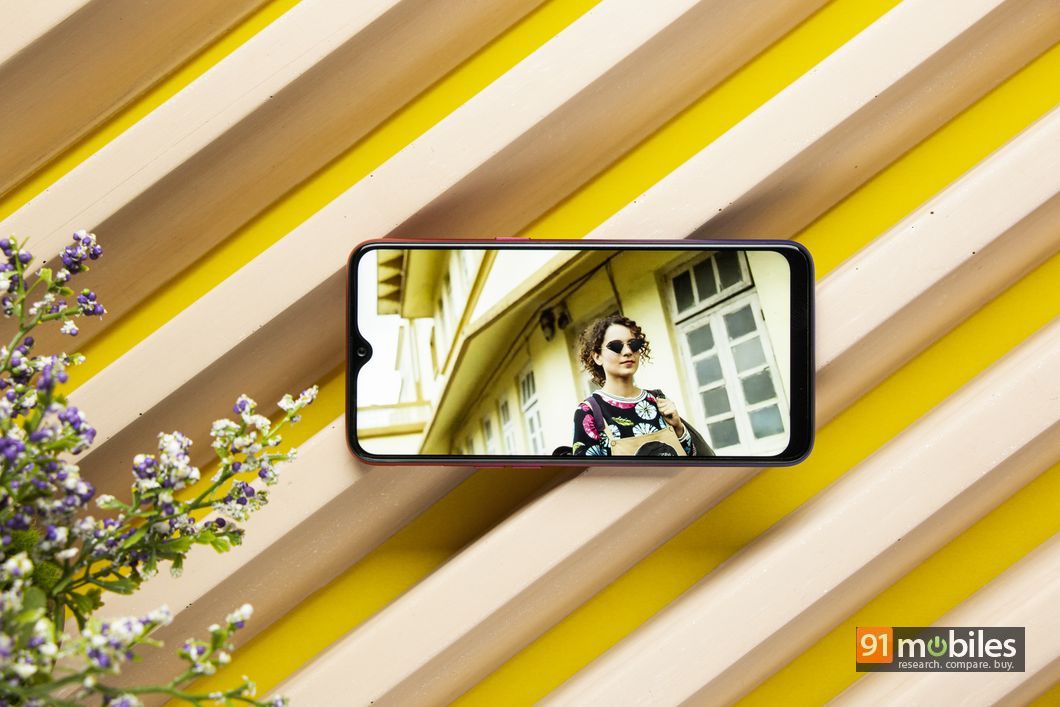 I should add that the device only comes with Widevine L3 certification, so you’ll be locked to SD resolution media when using apps like Netflix. Overall, while I would’ve wanted Realme to outfit a higher-res display on the 3i, I won’t be chalking points off the phone considering the handset’s affordable MRP.

How good is the Realme 3i’s performance?

Again, for the price, the Realme 3i offers really good performance. The smartphone is backed by MediaTek’s Helio P60 processor, which is an extremely capable octa-core chip. The CPU works alongside 4GB of RAM and 64GB of built-in, user-expandable storage. For the most part, the Realme 3i showed no signs of slowing down during my time with the phone. At any given instance, I had at least half a dozen apps open in the background and they all functioned seamlessly on the phone. 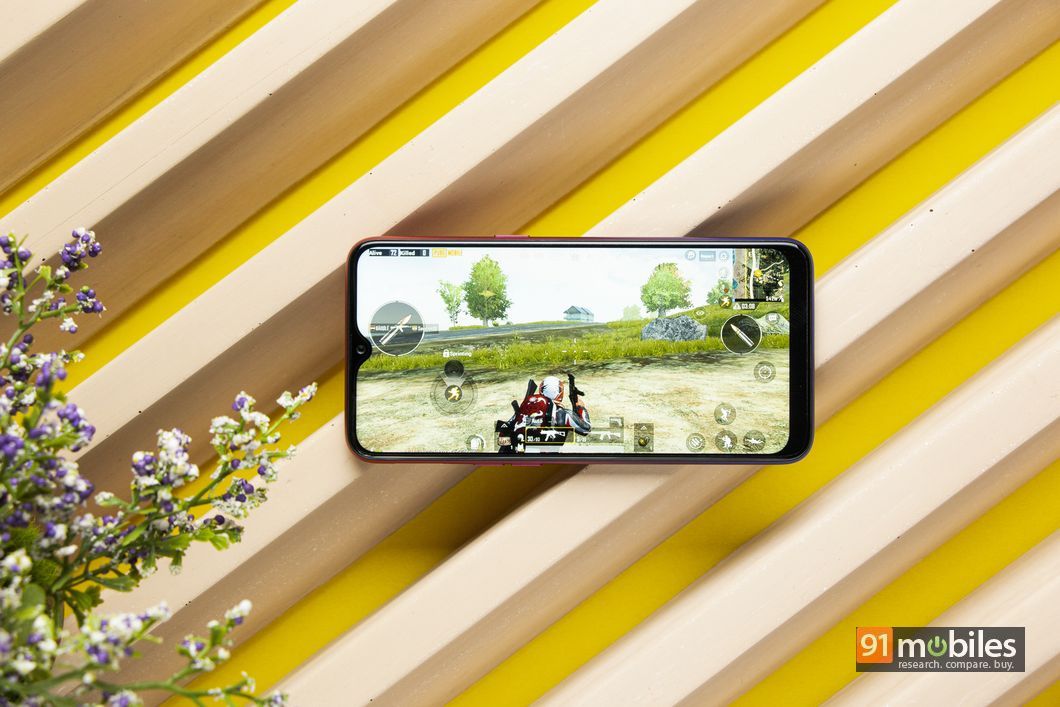 I did come across the occasional stutter when shifting through apps, but that’s the case with all devices in the budget segment. As for gaming, the phone could comfortably run intensive titles like PUBG on the HD graphics preset. I will recommend you turn off shadows for even smoother gameplay, but rest assured, you should be able to knock down some chicken dinners with the Realme 3i easily.

Is the software any good?

Surprisingly, it is. Now, I’ve a bias for phones which boot stock Android but even then, I didn’t find much to complain about with the 3i’s skin. The handset boots the company’s ColorOS v6.0 which is layered on top of Android Pie. Unlike most other Chinese skins, ColorOS v6.0 ships with an app drawer, so you won’t have to worry about the icons taking up space on your home screen. 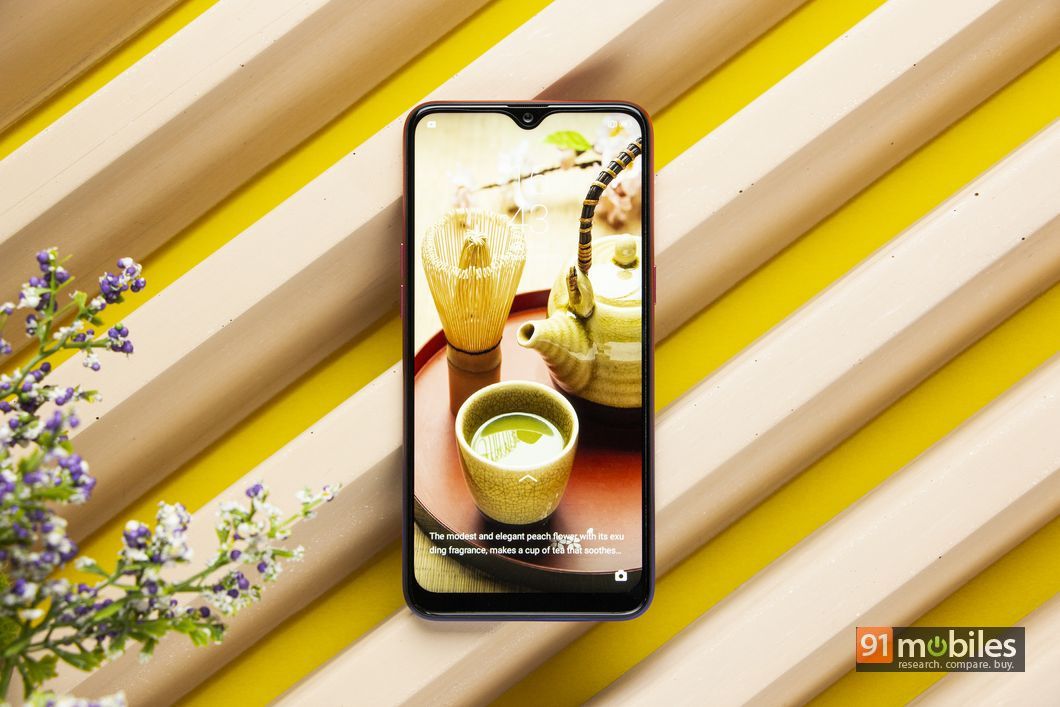 What’s more, you also get some nifty tools like support for navigational gestures and private safe which is built-in encrypted file manager, allowing you to store your personal photos and documents away from prying eyes.

What about the cameras?

The Realme 3i ships with a dual-camera setup towards the back, comprising a 13MP sensor with f/1.8 aperture and a 2MP shooter. Given its price point, the Realme 3i clicks fantastic photos during the day, as well as after the sun’s set. 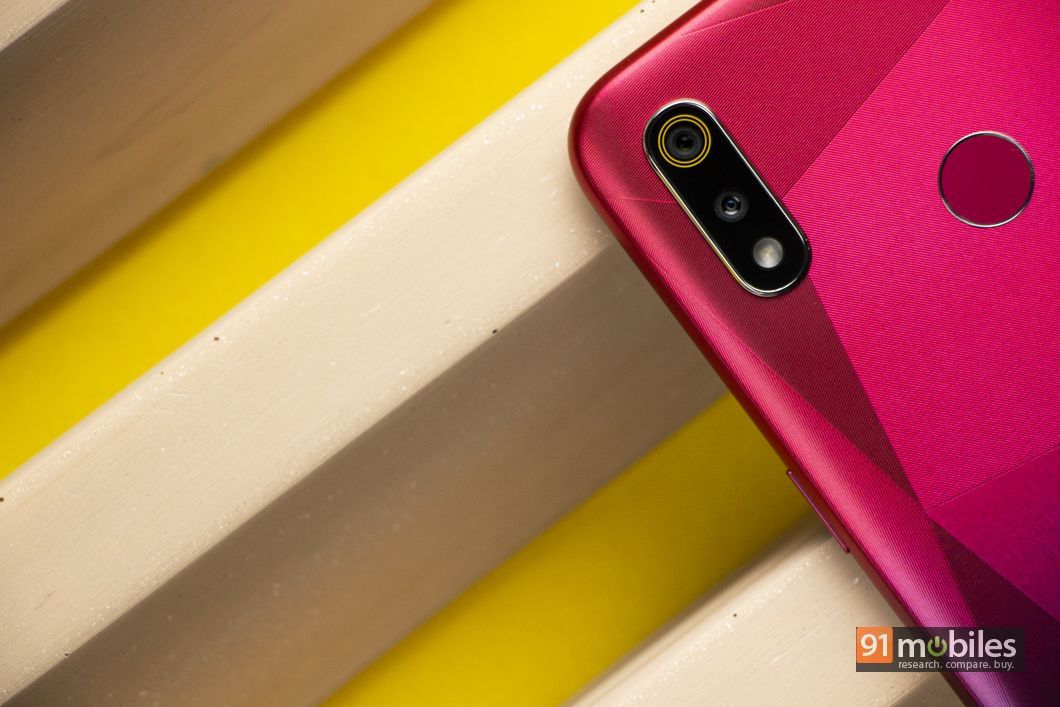 Shots taken during the daylight have ample details and good vibrancy and saturation. My only qualm with the photos I took with the phone are that the device over sharpens certain shots, which is evident if you click a picture of a tree. Other than that, the handset managed to correctly expose images with the sun in the background, and the dynamic range of the photos was per my liking too.

At night, the phone managed to keep the noise to the minimum whilst retaining a good amount of details in the photos. If you’re clicking macros when it’s dark outside, then you should know that the phone will struggle to latch focus on to a subject. But, once its locked on to the subject, you will be able to get away with a share-worthy picture easily. 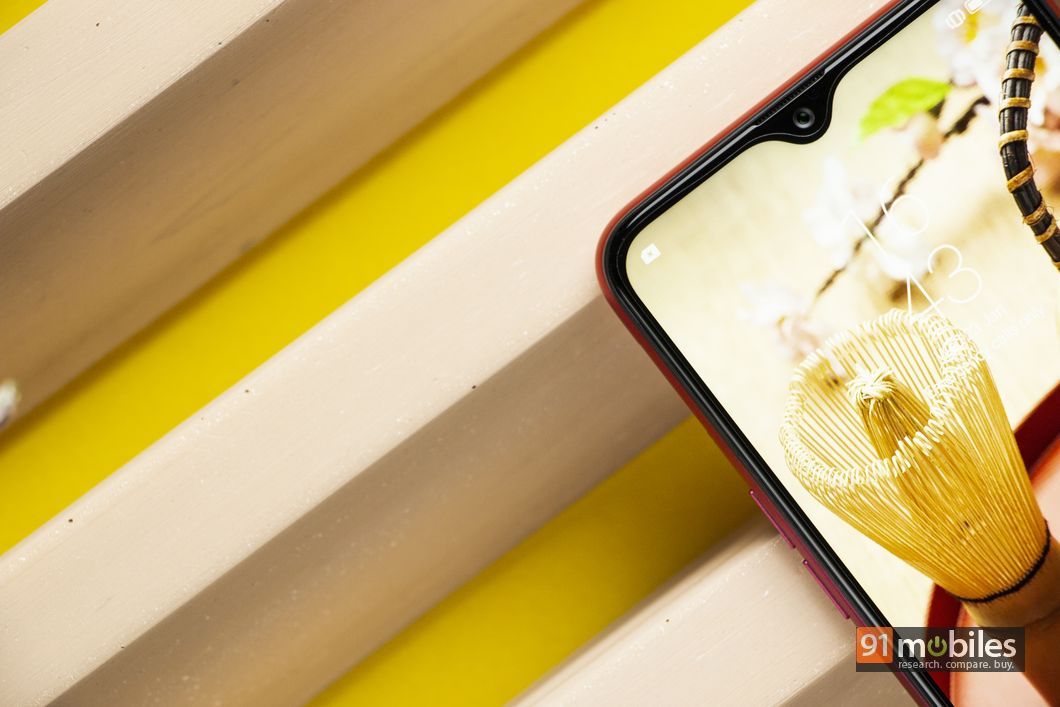 For selfies, the Realme 3i features a 13MP front-facing camera, which clicks remarkable self-portraits. The only issue with the device’s selfie shooter is that it softens the skin tone a bit too much, even when you’ve turned off all the beautification filters. Correspondingly, in the sample shots, you’ll notice my skin tone to be perfect with no dark circles or pimples whatsoever. In actuality, the humid weather in Delhi wasn’t as accommodating to my skin as the phone would have you believe.

How is the battery life?

The battery life on the Realme 3i is outstanding, thanks in parts to its beefy 4,230mAh cell and in parts owing to the phone’s relatively lower-res panel. During my stint with the phone, I was comfortably averaging over 5 hours of screen on time with the device, with my usage including browsing various social media platforms, a game or two of TDM in PUBG, watching videos on YouTube and listening to music. Suffice it to say, you won’t have to frantically search for a power brick in the middle of the day with the Realme 3i.

How loud are the speakers? What is the call quality like?

The speakers on the Realme 3i are okay at best. The device ships with a mono speaker towards the bottom which got easily muffled by my fingers. The sound output of the unit was nothing to write home about either, so I’ll recommend you use a pair of earphones when watching movies on the phone. 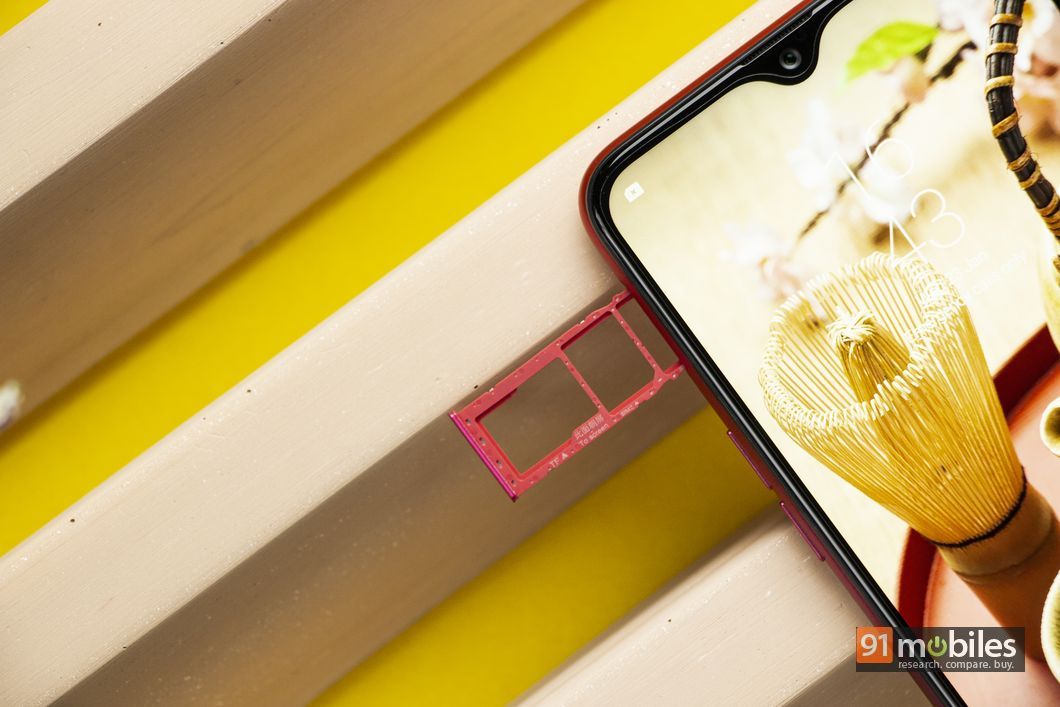 On the flip side, I was quite satisfied with the phone’s call quality. The earpiece relayed voices clearly to my ears and I didn’t hear any complaints from my friends over on the other end either.

Is the Realme 3i a slam dunk from the brand?

Not exactly. You see, while the Realme 3i is a great phone, I felt that the Redmi 7 (review) and the Redmi Y3‘s (review) Snapdragon 632 processor were a tad bit snappier. Moreover, if you prioritise selfies over everything else, then the Redmi Y3 is undoubtedly the phone to get as it ships with a 32MP front camera which, in a nutshell, blows the competition out of the water.

The Realme 3i starts at Rs 7,999 for the 3GB RAM model (4GB RAM variant costs Rs 9,999) and for the price, offers a sturdy, good looking design, dependable performance, and good cameras. Now, make no mistake – while the Realme 3i doesn’t bring anything groundbreaking to the table, it is yet another compelling option in the budget segment. 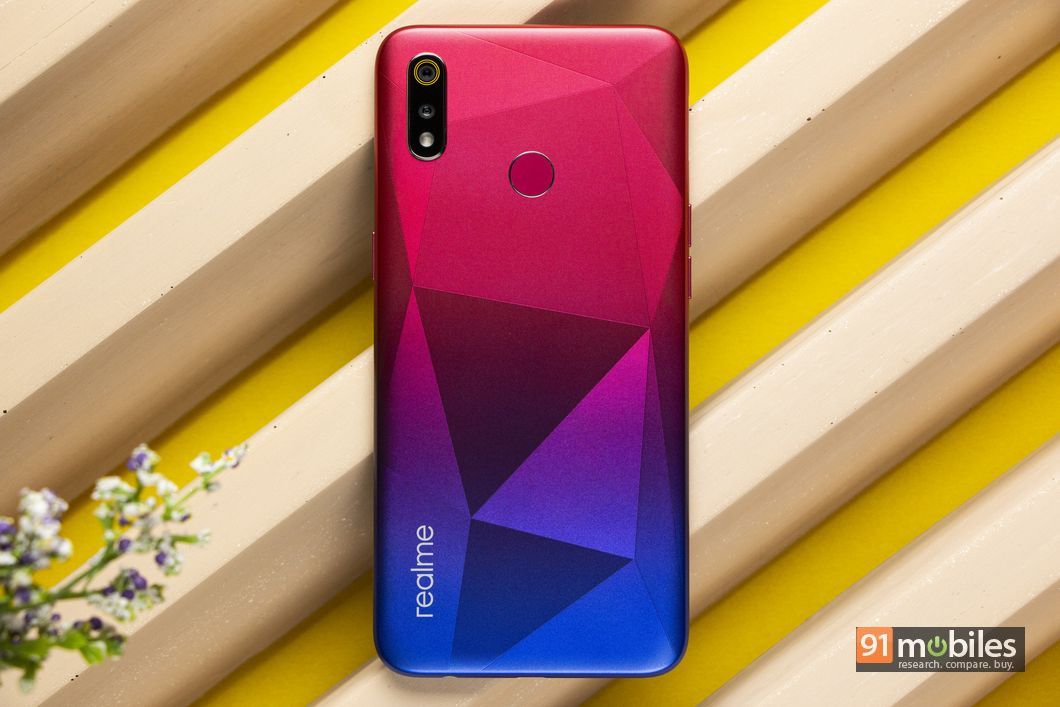 In fact, I believe Realme’s mantra is to have one compelling device for every Redmi phone in the market and so far, the company’s succeeded. Now, choosing between the two brands is no easy feat but for what it’s worth, you can’t go wrong with any Realme or Redmi device right now – they’re just that good.