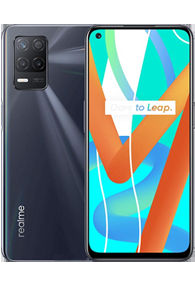 The Realme 8 series had two devices as part of its initial launch but the rumours were strong of a third 5G-powered device also being unveiled alongside. Now nearly a month after, the Chinese smartphone giant has finally announced the Realme 8 5G. It goes without saying that Realme has gone all out in promoting this device as the cheapest 5G smartphone in the country right now. Powered by the new Dimensity 700 chipset, the Realme 8 5G is definitely worth considering. The question is, will the presence of 5G make the device a viable choice against powerful rivals, which include devices from the Redmi Note 10 series. Of course, we already have our verdicts out on the Realme 8 (review) and 8 Pro (review), and it’s now time to take a look at Realme’s latest 5G offering which also happens to be the company’s 10th smartphone launch of the year. 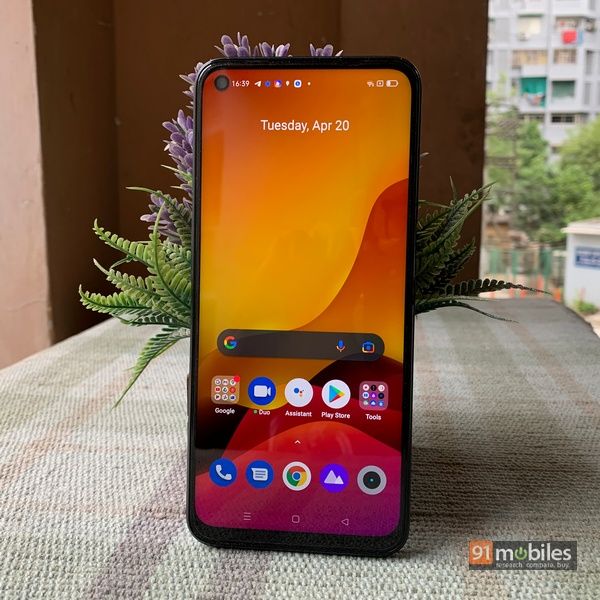 5G capabilities aside, the Realme 8 5G seems like an average device for its price. Considering what the likes of the Xiaomi Redmi Note 10 Pro or even the newly-launched Moto G40 Fusion offer, it looks like an uphill task for the Realme 8 5G to make a mark for itself in this price segmen. While the display and performance are decent, the cameras on the phone are not great, and it won’t win any style points either. In my opinion, simply making a phone 5G-ready is not going to make it stand out in front of the competition. 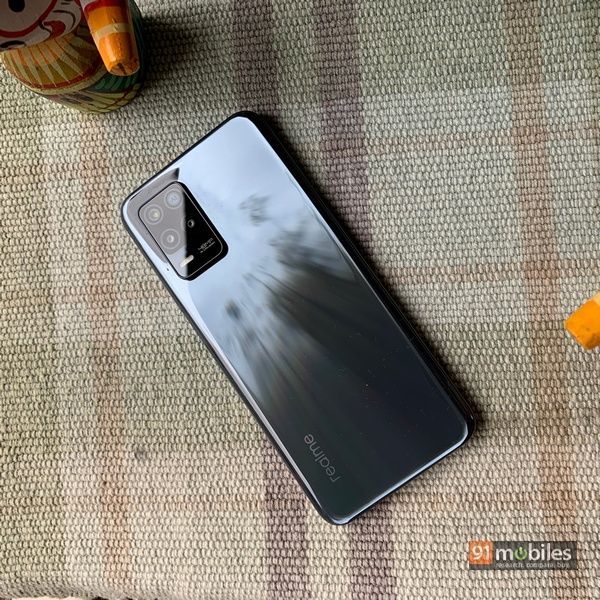 From the exterior, very little differentiates the Realme 8 5G from its 8 and 8 Pro siblings. The glossy plastic back has been ported over from other Realme phones, and has a tendency of attracting a lot of fingerprints. The hump encompassing the cameras retains the rectangular shape, though the Realme 8 5G has a triple-camera setup as opposed to the quad-camera on the other two. The fourth circle has the words AI inscribed in it while the flash module is placed in a little strip below the camera bump. Realme claims that the device is one of the thinnest 5G-capable phones on the market and at 8.5mm thickness that does appear to be the case. However, in the world of non-5G phones that number constitutes slightly on the higher side. The phone weighs about 185g giving it a light feel and an easy grip in the palm. Thankfully the ostentatious ‘DARE TO LEAP’ branding on the back (seen on its siblings) has been removed from the 5G model. Other aspects of the design remain mostly the same, and that includes the USB-C port, the 3.5mm headphone jack, and speaker grille at the bottom. The power button, however, has the fingerprint sensor integrated into it, as opposed to the in-display variety spotted on both the other devices. The tactility of the buttons, including the volume rockers on the side, remains quite impressive. It is apparent that the Realme 8 5G is a device that has usability in mind rather than a flashy appearance. 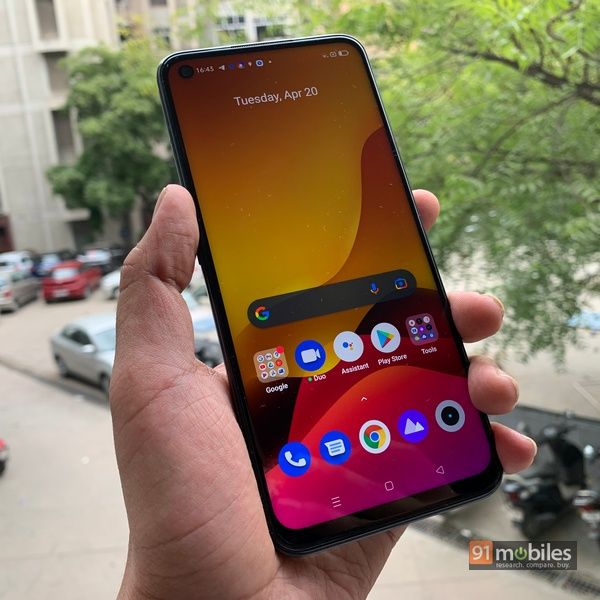 A big difference on the front is that the Realme 8 5G has opted to go for an IPS LCD panel instead of the AMOLED screens that the Realme 8 series had transitioned to. The display itself is 6.5-inch FHD+ with a 90Hz refresh rate and 20:9 aspect ratio. For the selfie shooter, there is the punch hole which has become increasingly common across the segment. There is really not anything much to be said about the device’s viewing experience that hasn’t already been explained in my Realme 7 review. For an affordable device, the Realme 8 5G offers a good, punchy, and slightly saturated display. The usual customisation options for controlling the colour temperature and profiles can be found in the settings menu along with a toggle for the Dark Mode. The 90Hz refresh rate works well in most cases and you do have the ability to switch to a lower refresh rate for conserving the battery. At 600nits, the display also gets plenty bright for you to peruse on your phone even in harsh sunlight. There is some off-axis colour shift and the blacks are not as prominent, but these can be expected from an LCD screen in this segment. On the positive side, there’s WideVine L1 certification, so you can watch HD content on OTT platforms. 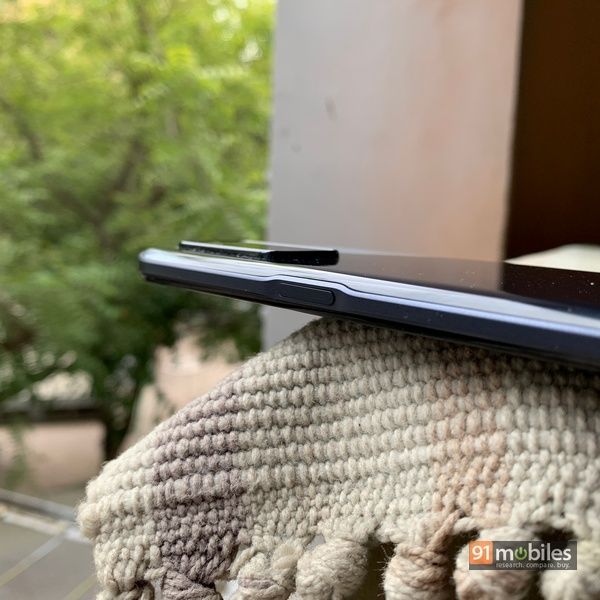 The optics are watered down on the Realme 8 5G, as compared to its siblings. The primary camera is a 48MP Samsung GM1 sensor, which is paired with a B&W sensor and a macro shooter with unspecified resolution. Right at the outset, it becomes clear that this is not an ideal camera setup for a phone that shares the Realme 8 branding. The inclusion of an ultra-wide lens, at the very least, would have been a welcome change. Irrespective, the Realme 8 5G does not have noteworthy photo capturing capabilities. In situations of good lighting, the sensor will pull off decent shots, but there is still a grainy-ness to the photos and the colours are mostly oversaturated. Dynamic range is good enough and exposure in dark areas of a shot does offer decent details. Even so, there is a lot of unnecessary smoothening of textures that mask the finer details reviewers like me look for in a photo. At night, lots of noise in the blackness of the sky leaves a sour taste. The dedicated Night Mode does an average job on the clean-up process too. Apart from this, there is the over-the-top colour pumping even in low-light that gives a very unrealistic look to shots. Exposure-wise, the phone does tend to reduce lens flaring, but the details captured have a very soft focus. Capturing any fast-moving object in limited lighting is very hard for the device. 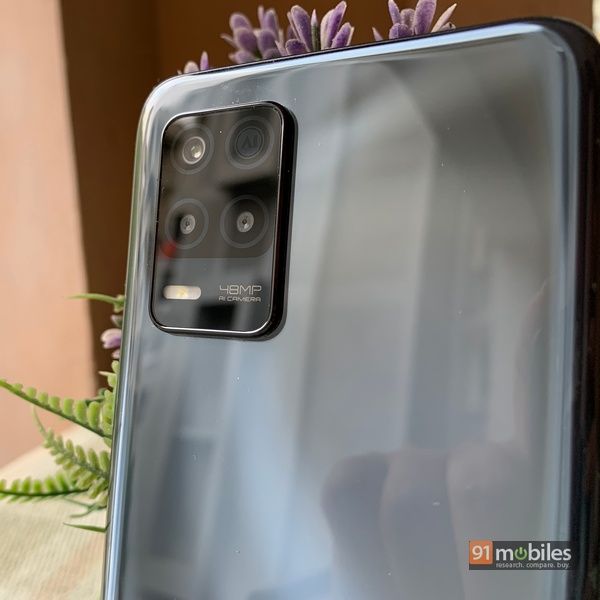 As for the B&W sensor, slapping on a monochrome filter on a shot from the primary sensor will give you about the same results as photos from this lens. Portrait-mode shots have decent edge detection and a soft blur that is easy on the eye. Macro shots are very much a hit-or-miss depending on how good the light falling on the subject is. Could an ultra-wide shooter be a better and more valuable addition? I certainly believe so, since a bigger field of view has a better use case. The front camera remains the 16MP shooter that has been a standard on several Realme phones in the past. It is acceptable for a budget phone when used in outdoor, well-lit environments but not so much elsewhere. The Realme 8 5G uses the new 7nm MediaTek Dimensity 700 SoC, which is marginally better than the MediaTek Helio G95 on the Realme 8, at least as per the benchmark scores. For the latter’s overall 297,216 score on Antutu, the former logs 304,952. Here you can see that the 8 5G’s GPU score of 68,849 is substantially lower than the Realme 8’s GPU score of 85,774. However, in all other aspects such as the CPU, Memory and UI, the Realme 8 5G pulls ahead, which is why it can match up with the Realme 8’s Helio G95 SoC. Other benchmarking scores also paint a very similar picture. There is no denying that the Realme 8 5G is a fast phone for its price and matches the increasingly high performance standards being set in the budget segment over the past couple of years. In fact, that seems to be the one big saving grace of the device when pit against its siblings. 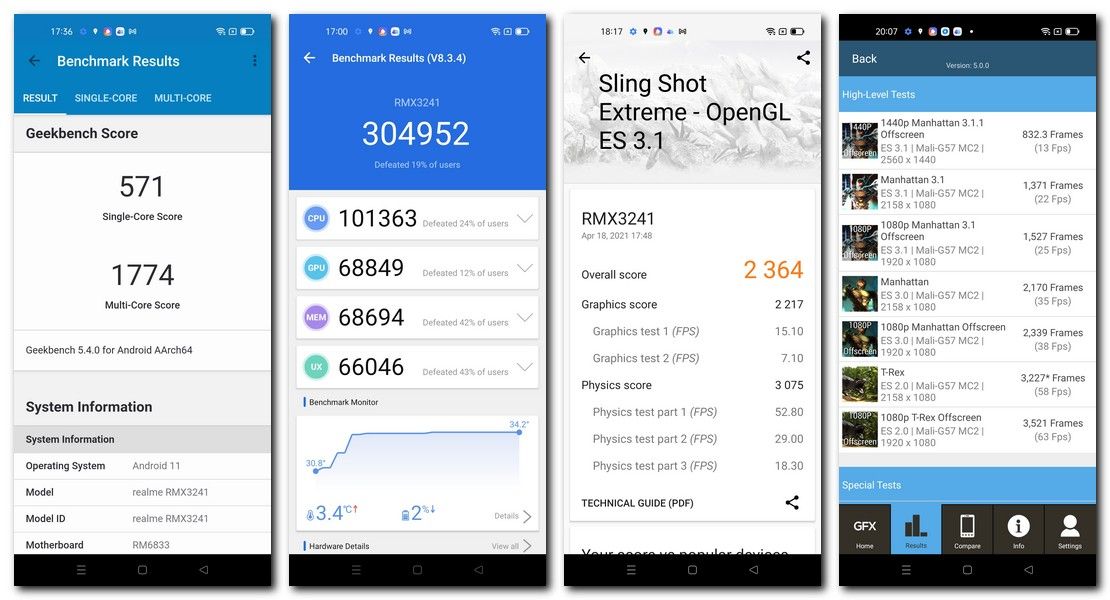 The usual tasks like multi-tasking and running background tasks work as well as you can expect on an affordable device. The version I’m reviewing comes with 8GB RAM but there is also a 4GB version of the device. For both these versions, Realme has implemented something called Dynamic RAM Expansion Technology. Basically, through some software wizardry, the Realme 8 5G will let you extend your RAM by converting some of the internal storage into virtual memory. As per Realme, 4GB of RAM can be extended to 5GB and 8GB RAM to 11GB when the need arises. It is a technique that several OEMs have been implementing as of late but for now, I have not felt a significant difference in performance because of it. GPU-related tasks also are carried out reasonably well. Even though the device scores a bit low on the GPU aspect of benchmarking tests, heavy-duty games like Call of Duty Mobile work quite well at the level of allowed graphical settings on the title. There is very little overheating to report and the game worked without dropping any frames till about 1 hour of non-stop usage. 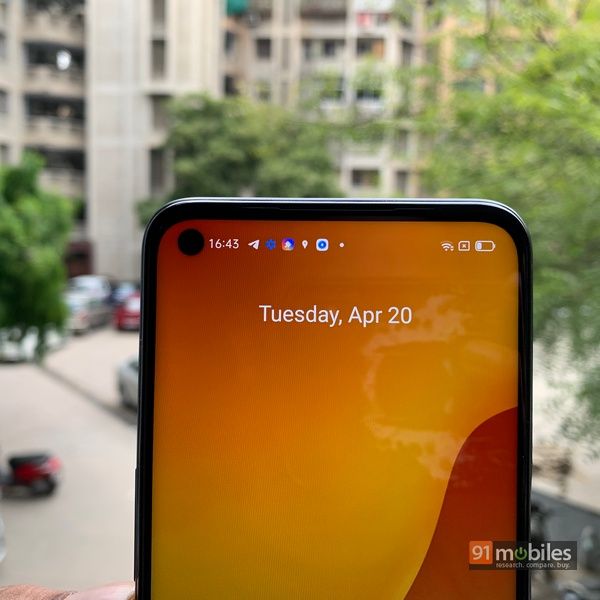 Let’s figure out if 5G is something you really need at this time considering that it is the phone’s biggest USP. While there is no doubt in my mind that the next generation of communications is well on its way to becoming a reality within the next year or so, how beneficial it would be on a budget phone is a different matter. The existing infrastructure of 4G/LTE is quite reliable and over the years has been efficient at providing high-speed internet access to users. 5G entices users with higher bandwidth and extremely low latency than what we are used to. However, the initial stages of the 5G roll-out may not provide the kind of coverage that would enable users to instantly start sapping the new network speeds. Like with 4G, a full-scale roll-out will take time during which two things are bound to happen. One, similarly-priced, or even cheaper 5G phones could come in with better specs and second, the Realme 8 5G, being a budget phone, is bound to become outdated. You could look towards the Realme 8 5G in the interest of futureproofing but my personal belief is that, at the moment, buying an affordable 5G phone might not make a lot of sense. I believe that only when 5G becomes commercially available should consumers on the lookout for budget phones consider it as a factor in their purchase decisions. Other aspects of the device include a snappy fingerprint reader, a tinny speaker and good earpiece and microphone quality. 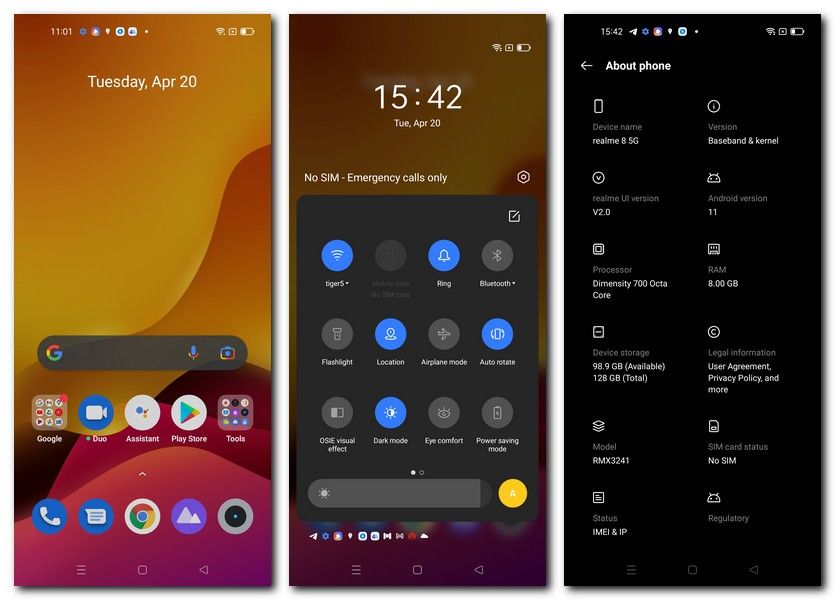 Realme has kept the same RealmeUI 2.0 based on Android 11 that can be found on several devices launched by the company this year. To say the least, I’ve been quite satisfied with Realme’s implementation of what can be termed as a reasonably clean experience. Bloatware has been kept to a minimum and the usability has been dialled up from previous versions. You can read my colleague’s review of the Realme 8 Pro to get a better understanding.

As for the battery, you get a sizeable 5,000mAh unit, but it supports 18W fast charging as compared to the 30W solution on the Realme 8. I typically got somewhere around 6 hours of screen on time or about a day and a half worth of regular usage on the device. The standard battery test involving a looped run of a movie at half brightness and volume yielded a score of 29 hours, which is in line with a 5,000mAh battery. It takes about 2 hours to completely juice up the device which is something to keep in mind. 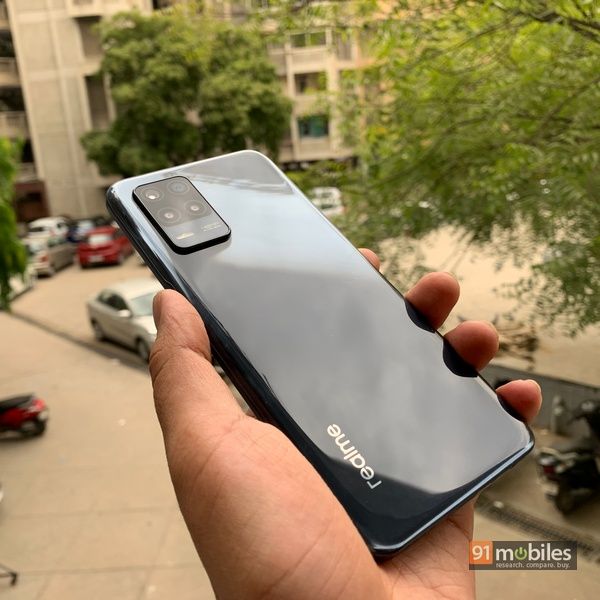 The Realme 8 5G is a capable phone in the performance aspect but its average camera quality and less than impressive charging speeds do raise some question marks. Yes, you are getting 5G on a budget but does it really make sense to sacrifice some key aspects of a smartphone experience just to have the next-gen communication standard, especially since the networks aren’t available yet? I think not. Getting a 5G-capable flagship or even a mid-range phone is acceptable since they are devices that will end up being used for a longer time. 5G on budget phones right now does not make them a worthwhile investment. Display and software on the Realme 8 5G are decent but the downgrade to IPS LCD is again a compromise that could have been avoided. I think that the Redmi Note 10 Pro is an extraordinary device that does miss out on 5G, but is a better phone in just about all other aspects, available at a similar price. 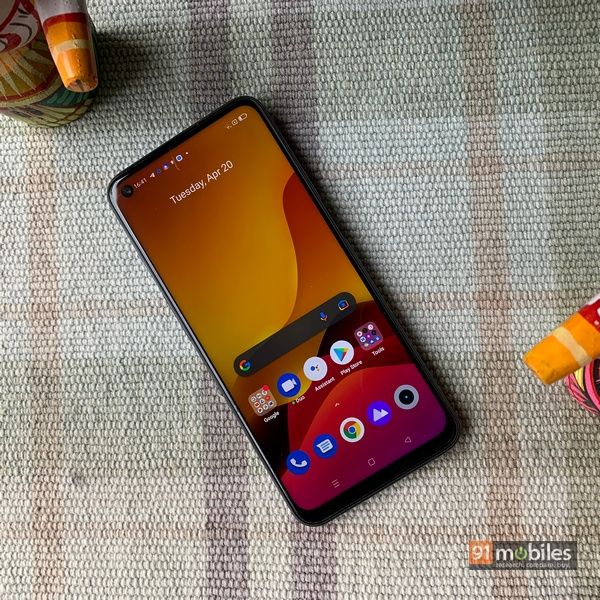