Realme has solidified its presence in India, which is no mean feat considering the company set foot in the subcontinent a mere three years ago. In that time, the brand has not just launched a bevy of enticing smartphones, but has managed to create an ecosystem of products that comprises IoT gear, TVs, audio products, and other accessories. And, it looks like the brand is going full steam ahead, as the company recently launched a slew of new earphones in the country, including the Buds Wireless 2 Bluetooth earphones. I managed to get my hands on a pair and here’s what I make of it.

The Buds Wireless 2 looks undeniably like a Realme product, which can be accredited to the unit’s yellow accents. Now, some of you might have grown out of the company’s iconic colourway, but I still adore the brand’s trendy accents. That said, you can opt for a more inconspicuous gray shade too, which is nice. 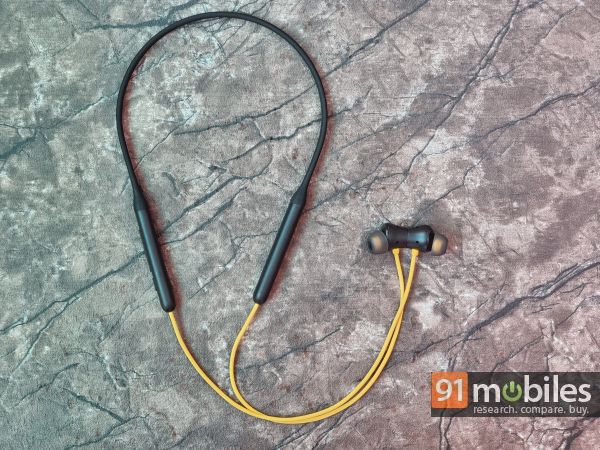 I’d also like to add that the earphones draw a lot of parallels to the Buds Wireless Pro launched a while ago. Core specs aside, the two earphones look quite similar, though the Buds Pro features a thicker lapel that rests around the neck. On the flip side, the Buds Wireless 2 opts for a rubberised, silicone chassis that is soft to the touch. It also helps that the material doesn’t itch, and the earphones, on the whole, weigh just 29 grams. On the other hand, the individual earpieces are quite chunky and the pair protrudes out quite a bit – you’d want to think twice before wearing the pair to bed. 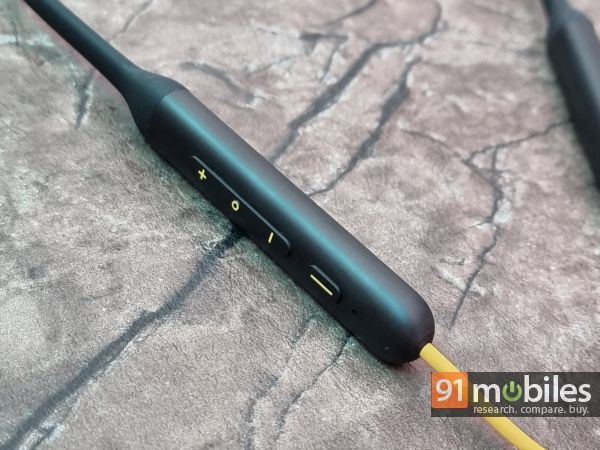 However, for the most part, the Buds Wireless 2 will offer a comfortable listening experience. In fact, you can even use the pair whilst you’re working out as the wires stemming from the neckband are just the right length, thereby ensuring that you have ample room to move or tilt your head without the earbuds snapping off. Oh, and you need not worry about sweat or water splashes when using the Buds Wireless 2 as the earphones are IPX5 certified as well. 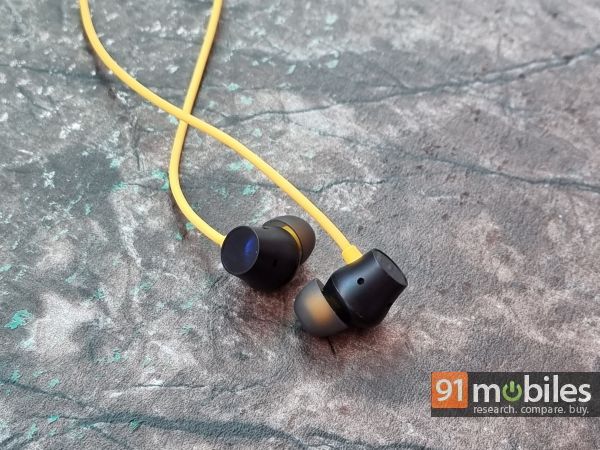 Moving on, the Buds Wireless 2 ships with music playback controls, which can be found positioned towards the neckband’s right-hand side. The controls allow users to play or pause a track, or jump forward or go back a song on their playlists. What’s more, the company has a dedicated toggle (the oval-shaped button) to switch between different ANC modes as well. And, that’s not all, as you can double-tap the same to switch the Buds Wireless 2’s connection between two different devices as well. You’ll also get Google’s Fast Pair support with the Buds Wireless 2 and can simply snap the magnetic earbuds shut to turn off the earphones as well.

It’s clear that Realme has gone above and beyond with the design of its latest product. Not only do the Buds Wireless 2 look good, but they pack a bevy of features that make them that more convenient to use. Now, let’s see if the earphones impress in the sound department too.

Spec-wise, the Realme Buds Wireless 2 draws quite a lot of parallels with the Buds Wireless Pro launched a while ago. For instance, both the earphones ship with a pair of 13.6mm drivers, offer support for Sony’s LDAC codec, and are high-res certified. That being said, in my testing, the Buds Wireless Pro sounds much better. Now, honestly, I can’t put a finger on why the Buds Wireless 2 doesn’t sound as good – it could have something to do with the new Realme R2 chip which has been put in place of the S1 chip, or maybe the company has employed different 13.6mm drivers. Regardless, I would like to preface that while the two earphones share the same spec-sheet, their acoustic prowess could not be any more different. 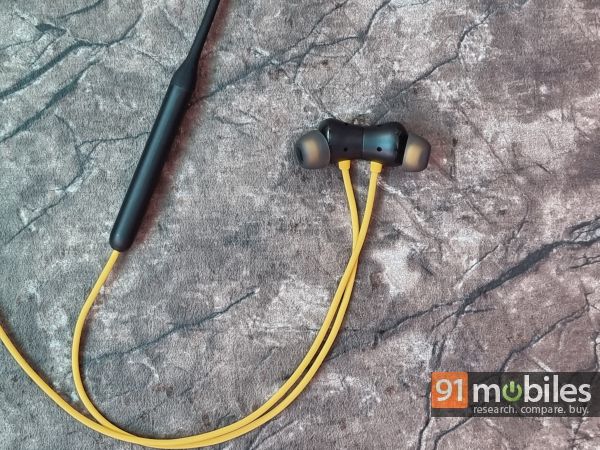 So, how do the Buds Wireless 2 sound? Well, the earphones offer a bass-forward sound signature to boot, that can overwhelm other frequencies. However, with the ‘Bright’ preset enabled from the Realme Link app, the bass output changes for the better. In particular, the vocals open up and the beats sound less boomy. Unfortunately, the bass still bleeds into the rest of the frequency spectrum, thereby muddying the overall sound output. The same was evident in Tyler the Creator’s Juggernaut and here, not only did the vocals sound gratuitously deep, but the instruments in the background struggled to make a mark. Similarly, the highs felt lackluster with little to no sparkle and quick roll-offs, even before a note hit its peak. Listening to The Killers Mr. Brightside, I was expecting the chorus to sound energetic, but the treble output made the strums from the electric guitar feel a bit too relaxed. 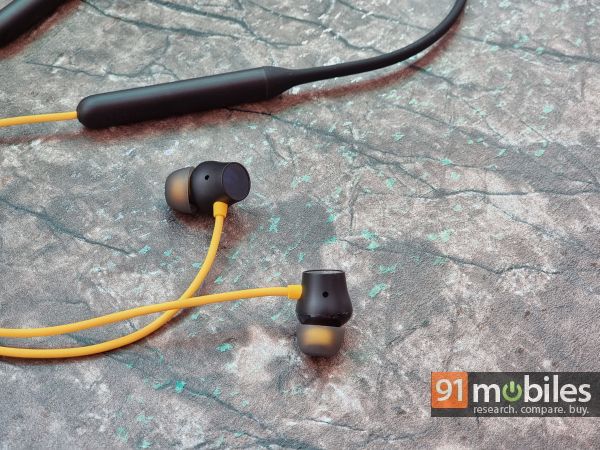 Now, it’s no secret that buyers eyeing the Realme Buds Wireless 2 will have OPPO’s Enco M31 shortlisted too. To that note, I can confidently say that the Enco M31 sounds much better than the Buds Wireless 2 earphones. In fact, I would say that the Enco M31 is the only Bluetooth headset south of Rs 5K that actually benefits from Sony’s LDAC codec – the unit outputs incredibly detailed sound. However, the Buds Wireless 2’s bass-forward sound signature will surely appease the masses. Moreover, Realme’s offering packs a wallop in the battery department, and ships with ANC too, so let’s talk about that now.

The Realme Buds Wireless 2 allegedly offers 10 hours of battery life on LDAC codec with ANC enabled. In my testing, the pair managed to last me a little over eight hours off a single charge, and that’s with the ANC and LDAC enabled and the volume hovering around 70-80 percent. That said, you can get much better battery life out of the pair if you use the AAC codec instead. What’s more, the unit also ships with the company’s Dart charge technology which should come in handy if you’re in a rush as it offers up to 12 hours of music playback off a 10-minute top-up. 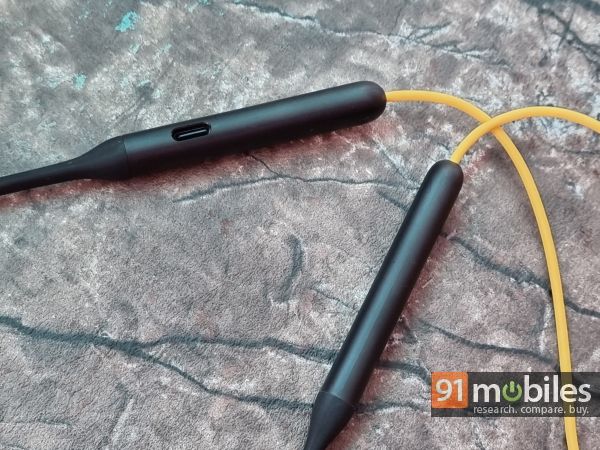 The call quality was to my liking as well. I didn’t notice any erratic voice drops, and the clarity was sublime too, so no complaints here. As for the ANC, well, it’s fantastic too – at least for the price. It’s not as strong as what you’d get with the Buds Wireless Pro, which combines FeedForward and FeedBack mics to maximize ANC. On the flip side, the Buds Wireless 2 only offers FeedForward mics, which is to be expected given the earphone’s wallet-friendly pricing. Regardless, the earphones managed to dampen all sorts of noise, including construction noises ensuing from the house next door that’s undergoing renovation, to the birds chirping near my window, etc.

The Buds Wireless 2 retail for Rs 2,299 and for the price, bring a lot to the table. That said, the earphones can’t hold a candle to the OPPO Enco M31, which in my books, is still the best neckband-style wireless headset around Rs 2K. So, if you preface the audio quality over everything else, I’d recommend you opt for OPPO’s offering. However, if you can make do with a bass-heavy sound signature and want added niceties like ANC, as well as better battery life, then the Realme Buds Wireless 2 is a solid buy too.