Realme has been up and running for just around three years in the country and in that time, the brand has managed to create a compelling ecosystem of products that comprises smartphones, earphones, wearables, IoT gear, and even laptops. That said, despite having a lot of irons in the fire, the company’s audio portfolio lacked Bluetooth speakers, which brings us to the topic at hand. Recently, Realme took to the stage and announced two affordable Bluetooth speakers, including the Cobble Bluetooth speaker and the Pocket Bluetooth speaker. I managed to get my hands on the former and here’s what I make of it.

As its moniker suggests, the Realme Cobble Bluetooth speaker looks like…well, a Cobble – you know, a round-ish stone that you might’ve slung across a lake back in the day. Forgive me, but that’s the only memory I have of round stones. 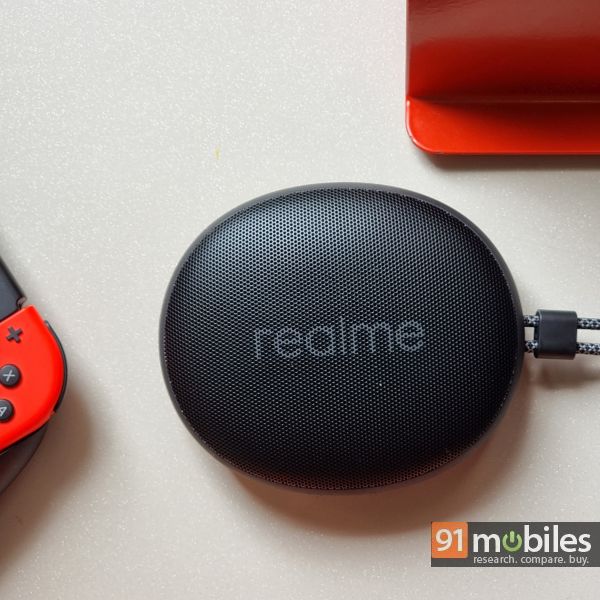 Jokes aside, the Realme Cobble Bluetooth speaker is geared towards outdoorsmen, and the unit’s design reflects the same. To that note, the speaker ships with a rubberised housing and a fancy lanyard, allowing users to carry it comfortably when they’re out and about. Moreover, at 200 grams, the speaker is fairly compact too and the device even ships with a metallic mesh grill up top, which lends the unit an even more durable and robust in-hand feel. Speaking of which, the Realme Cobble Bluetooth speaker is IPX5 rated as well, so you needn’t worry about splashing the device with some water. 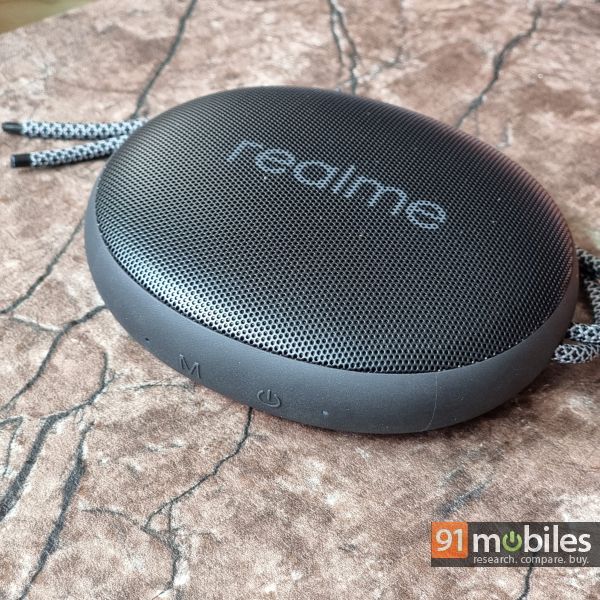 I was pleasantly surprised with the Realme Cobble Bluetooth’s sound quality. In fact, the unit easily takes the cake for the best-sounding speaker under Rs 2K. But, before I talk about that, let’s take a quick look at the specs on offer, and here, the Cobble is backed by a 5W dynamic driver which works alongside a dedicated bass radiator. The unit can operate across a frequency spectrum of 110Hz-18KHz and supports SBC and AAC Bluetooth codecs. 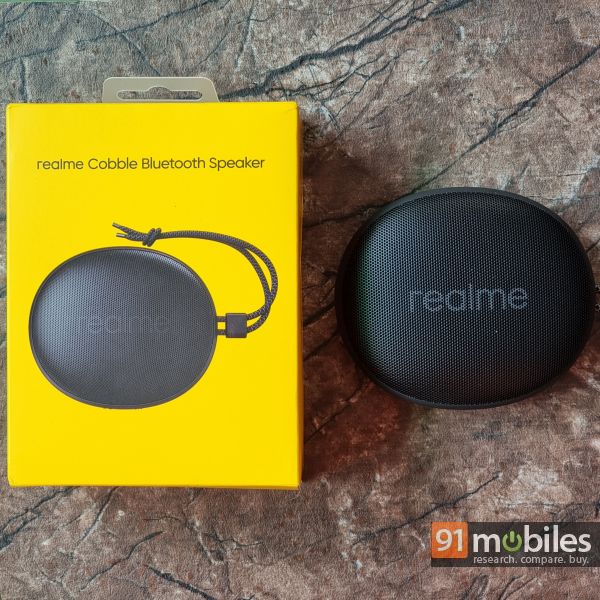 Despite its modest size, the Realme Cobble Bluetooth speaker packs a punch in the low-end. The unit’s sound signature invariably favours the bass and the mids, though the impact or slam from the beats rarely ever takes centre stage. On the flip side, the speaker gives ample room for the vocals as well as background instruments to breathe. As an example, in DDG’s Moonwalking in Calabasas, I could hear the vocals as well as the strum from the guitar clearly, alongside the song’s punchy beats. Similarly, the Realme Bluetooth Cobble speaker retained adequate details in G-Eazy’s It’s Eazy – the artist’s voice was relayed distinctively, the tonality was on point and the slam from the beats was extremely crisp and tight too. Turn the page over to a less energetic soundtrack and you’ll find a similarly pleasing result. In the popular Manike Mage Hithe track, for instance, the speaker reciprocated the highs and the lows of the artiste’s vocal range eloquently. It also helps that the Cobble can get really loud and the audio rarely feels muddy or distorted with the volume set to say, 70 or 80 percent. 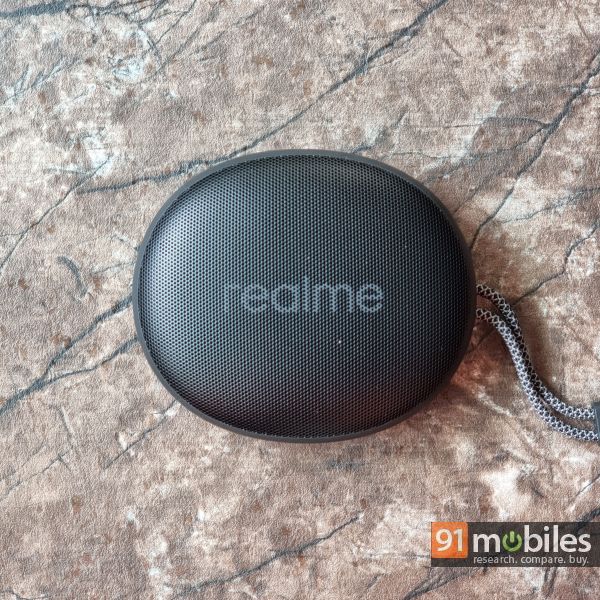 With that said, the speaker can’t tackle sub-bass frequencies, which is evident if you listen to James Blake’s Limit To Your Love, or Leonard Cohen’s You Want It Darker on the unit. The rumble in Leonard’s voice, or the thunderous beat drop after the first verse in Limit To Your Love sound, for the lack of a better word, discordant. 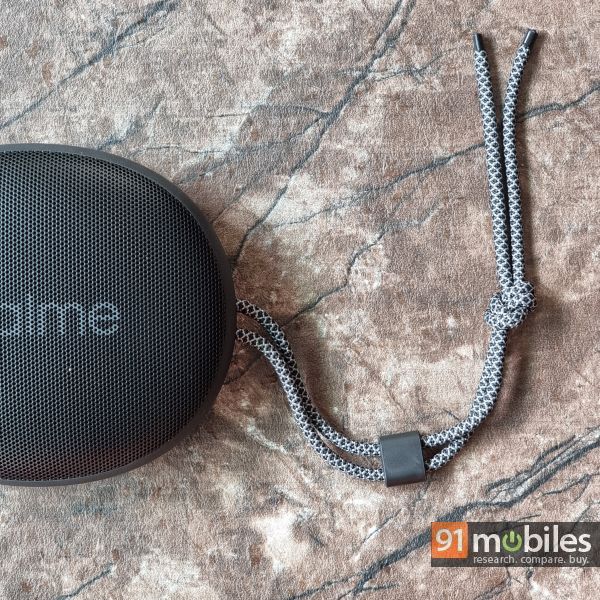 Moving on, you can finetune the Realme Cobble Bluetooth speaker’s sound signature by heading on over to the Realme Link app. I noticed that the vocals shine through the best with the ‘Bright’ sound preset enabled. However, you might want to switch back to the “Dynamic” sound preset for tracks with a lot of bass. As for the battery life, the Realme Cobble Bluetooth speaker should last you around 5-6 hours off a single charge, and that’s with the volume set to around 70-80 percent. I’d also like to add that the unit ships with a built-in microphone, so you can take calls on the same. The call quality was serviceable, but I had to position the speaker close to me to ensure my voice was relayed clearly over to the other end.

The Realme Cobble Bluetooth speaker retails for Rs 1,799, but buyers can snag the device at a discounted price of Rs 1,499 during the first sale. Now, even if you miss the launch-day offer, the Realme Cobble Bluetooth speaker would still warrant a purchase, seeing how the device offers good sound quality, a compact and rugged design as well as decent battery backup. Of course, you could pick up the Mi Outdoor Bluetooth speaker (5W) too, which is currently retailing for Rs 1,499 on the company’s website and offers much better battery life, along with dedicated buttons to change the volume on the fly. However, the speaker ships with an archaic micro-USB port and doesn’t support any EQ customisability either. 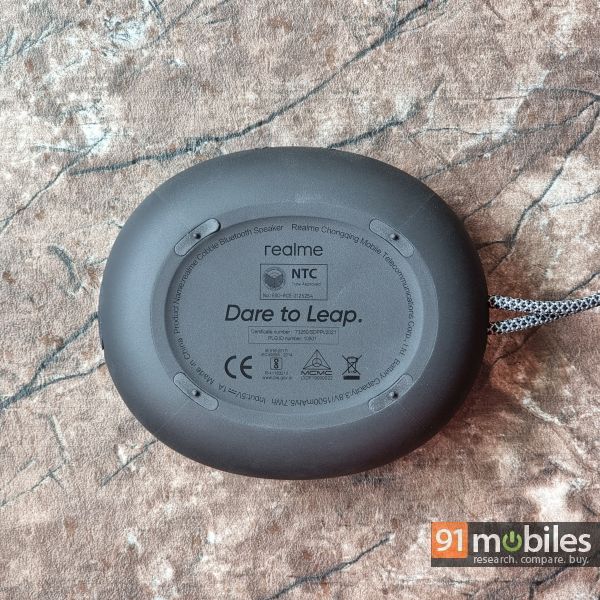 Rest assured, choosing between one or the other is not an easy task – after all, both the speakers are among the best-sounding Bluetooth speakers in their price segment. That said, if you had your eyes set on the Realme Cobble Bluetooth speaker, then by all means, go for it – the device will not disappoint you.