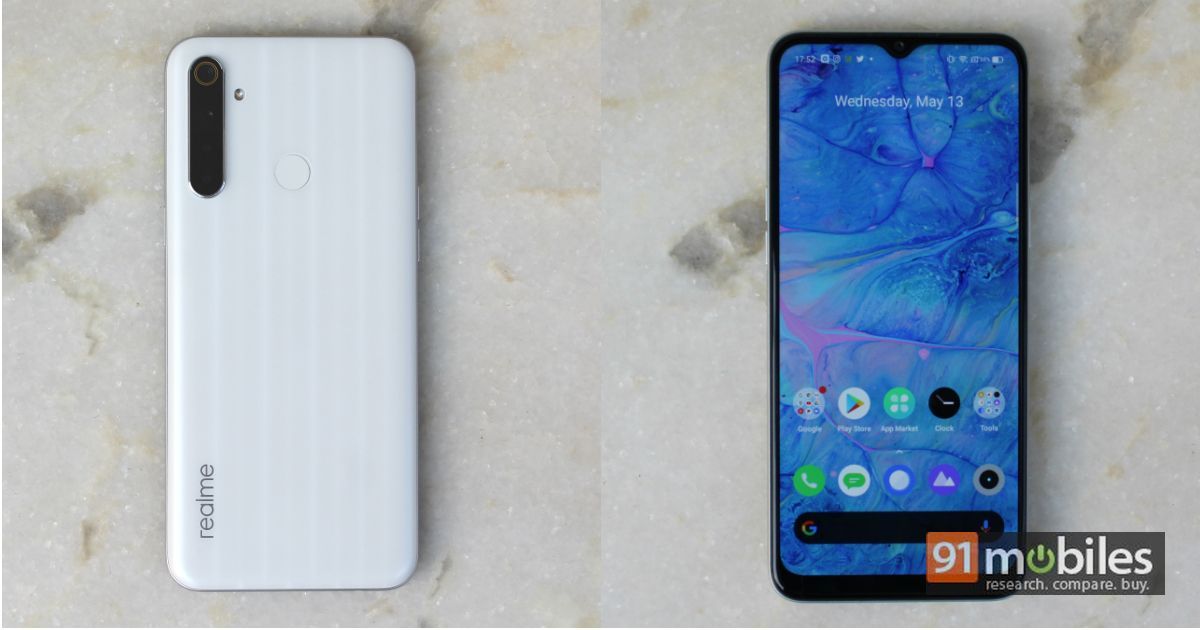 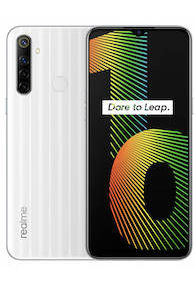 Realme Narzo is a brand new series that was expected to launch two months ago in March. Unfortunately, the coronavirus lockdown in India forced Realme to postpone the launch of the Narzo 10 and Narzo 10A, the first pair of smartphones under this new series. After the government eased e-commerce restrictions in the country earlier this month, Realme was finally able to launch the Narzo series. This review is all about the Narzo 10.

The Narzo 10 is a slightly more powerful and feature-rich smartphone compared to the Narzo 10A. Key specifications include the Helio G80 gaming-centric processor, 48MP quad cameras, 5,000mAh battery, 18W fast charging and a waterdrop display. Yes, the specifications and design of the Narzo 10 are identical to the Realme 6i that launched in Malaysia.

The Narzo 10 offers compelling features for a phone priced at Rs 11,999. Notably, it is the first smartphone in India to be powered by the Helio G80 gaming processor. The Narzo 10 also touts a full-day battery and a 48MP quad camera setup that consumers can appreciate in this segment. However, the Narzo 10 still feels like a derivative Realme phone, which may not excite some buyers who were expecting something more from this new series. 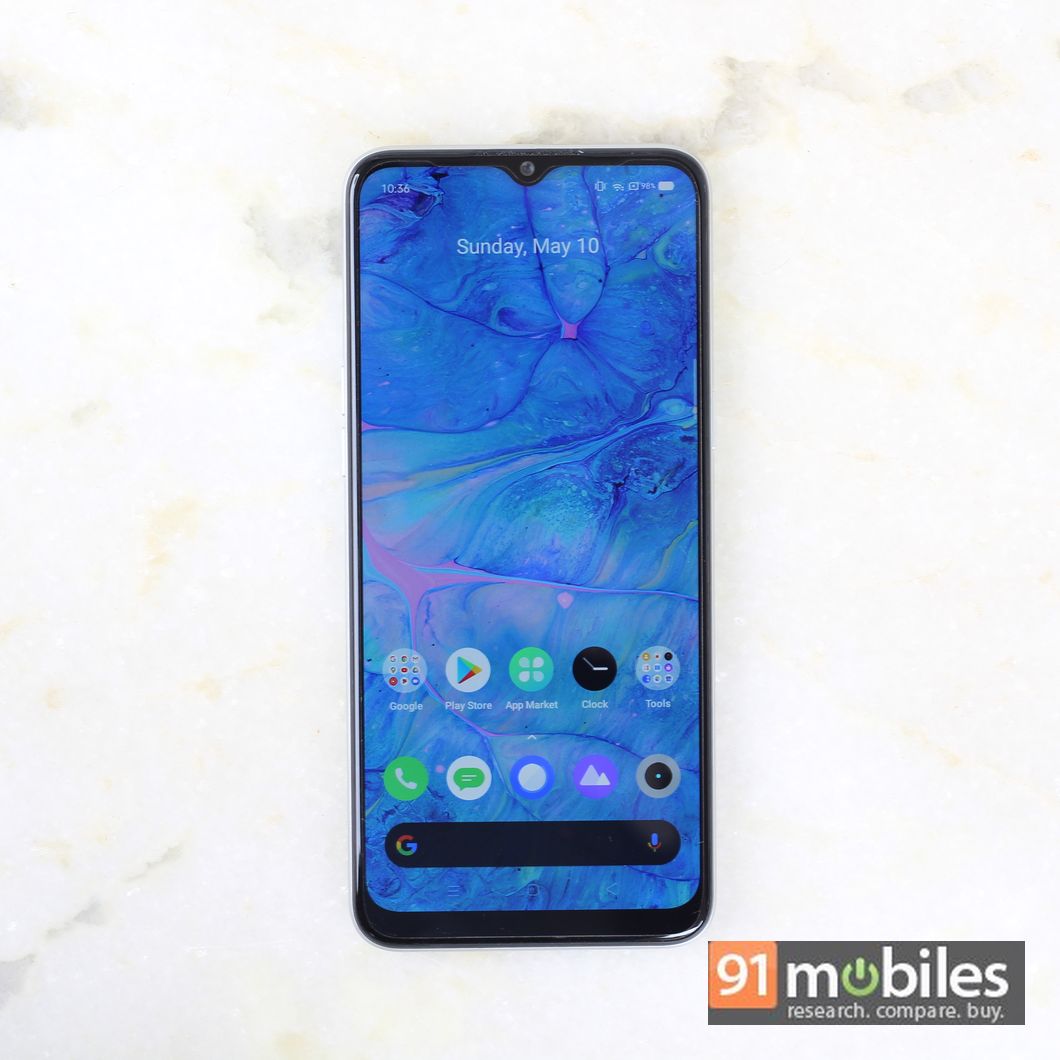 Realme says the Narzo series is for the Gen-Z crowd that’s looking for power and youthful design. Talking about the design aspect, the Narzo 10 does look attractive thanks to a smooth curved rear panel that comes in Green Tea and White Milk colour options. The vertical lines on the panel combined with a matt finish has been designed by Japanese designer Naoto Fukasawa, who has previously worked with Realme on the Realme X2 Pro Master Edition as well.

As attractive as the smartphone looks from the back, the matt feel makes the Narzo 10 slippery in the hand. It’s not the easiest phone to work with without a cover, and its weight of nearly 200 grams means it feels a little heavy too. Overall, the Narzo 10 is a thick and bulky phone and this is due to a large battery inside. 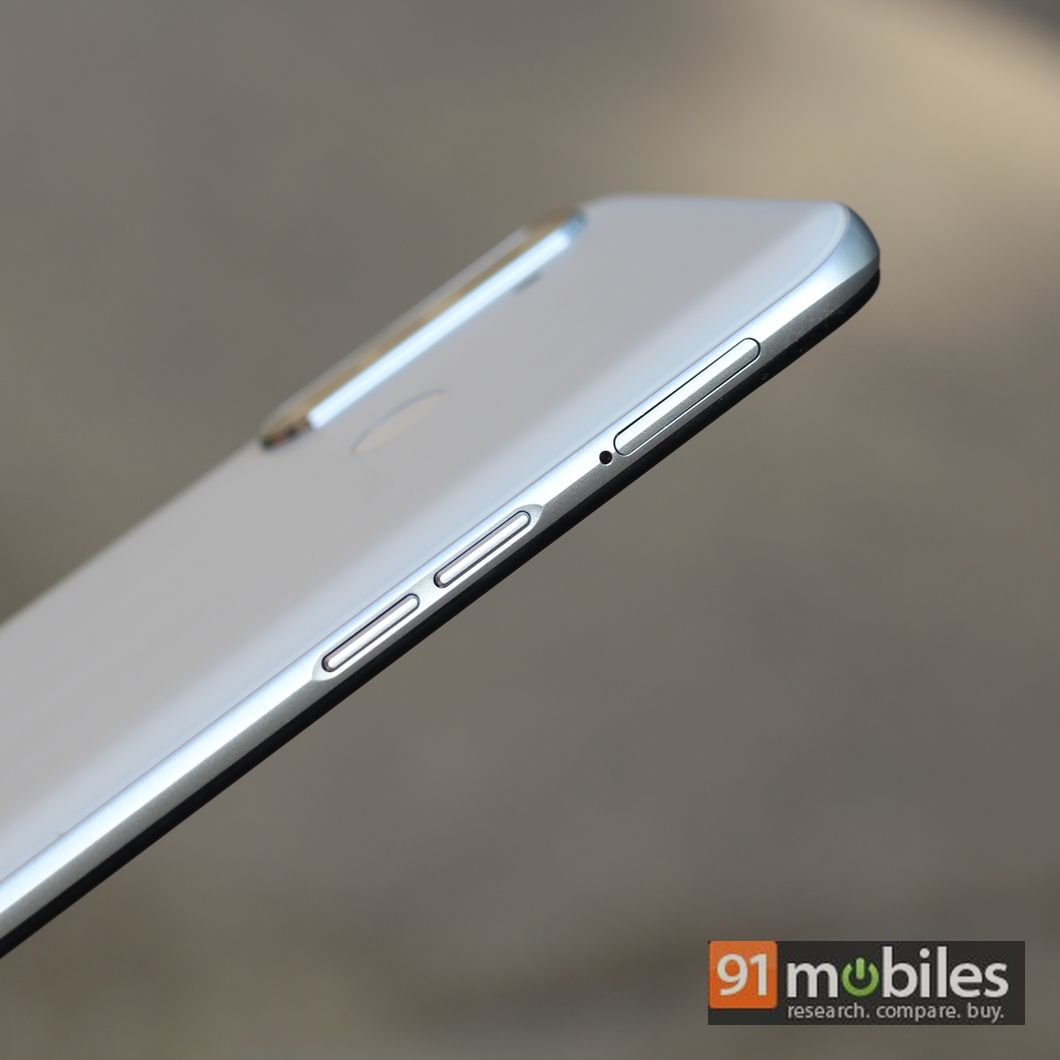 As for everything else, the Narzo 10 gets a power button on the right side and volume buttons on the left side of the frame that are easy enough to reach. The rear-mounted fingerprint sensor is also well placed, and is fast and mostly accurate at unlocking the device. The phone comes with a triple card slot to hold two nano SIM cards and a microSD card. The phone also gets a Type-C port, headphone jack and a speaker grille on the bottom.

Coming to the display, you get a 6.5-inch HD+ (720 x 1,600) waterdrop display with a screen-to-body ratio of 89.8 percent and Gorilla Glass 3 protection on top. The bottom bezel is thick as compared to the bezels on the sides and the top. The display quality is decent with punchy colours, deep blacks for an LCD screen, and enough brightness to stay visible under peak sunlight. Auto brightness levels can be unsatisfying indoors, and we found it simpler to just disable the feature. 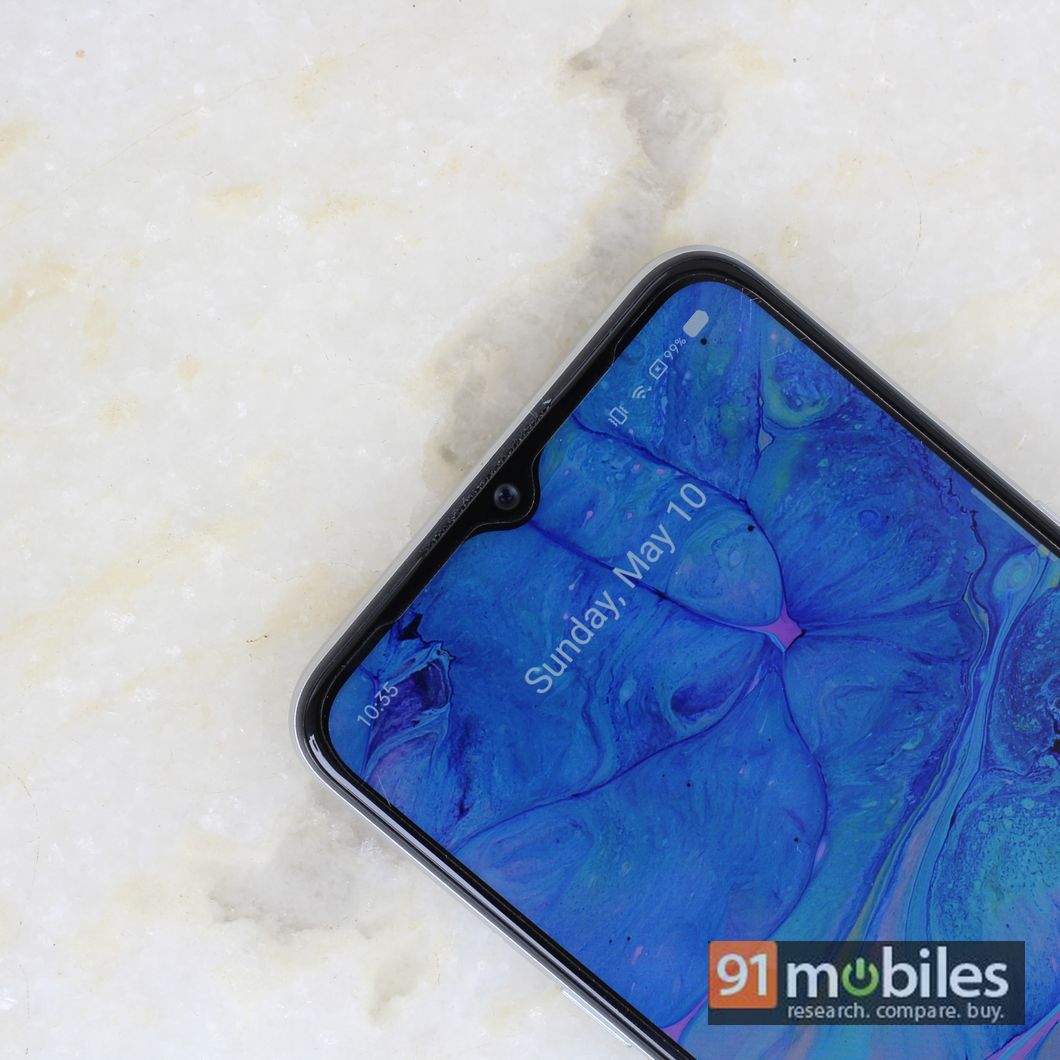 For its price point, consumers will be disappointed to see an HD+ display, especially since you can get a FHD+ smartphone like the Redmi Note 8 at just Rs 10,999. This is likely an unfortunate effect of the GST rate hike on the Narzo 10. With a 720p resolution, you should not expect picture quality to look extremely sharp, although text appears sharp enough.

Videos on streaming platforms like Netflix and Prime Video will not offer HD resolution as the phone lacks Widevine L1 certification. Unfortunately, our experience was further hampered during the lockdown as these services, including YouTube, reduced their streaming quality, so we couldn’t stream videos in high definition. We will update our review once these service resume HD streaming. 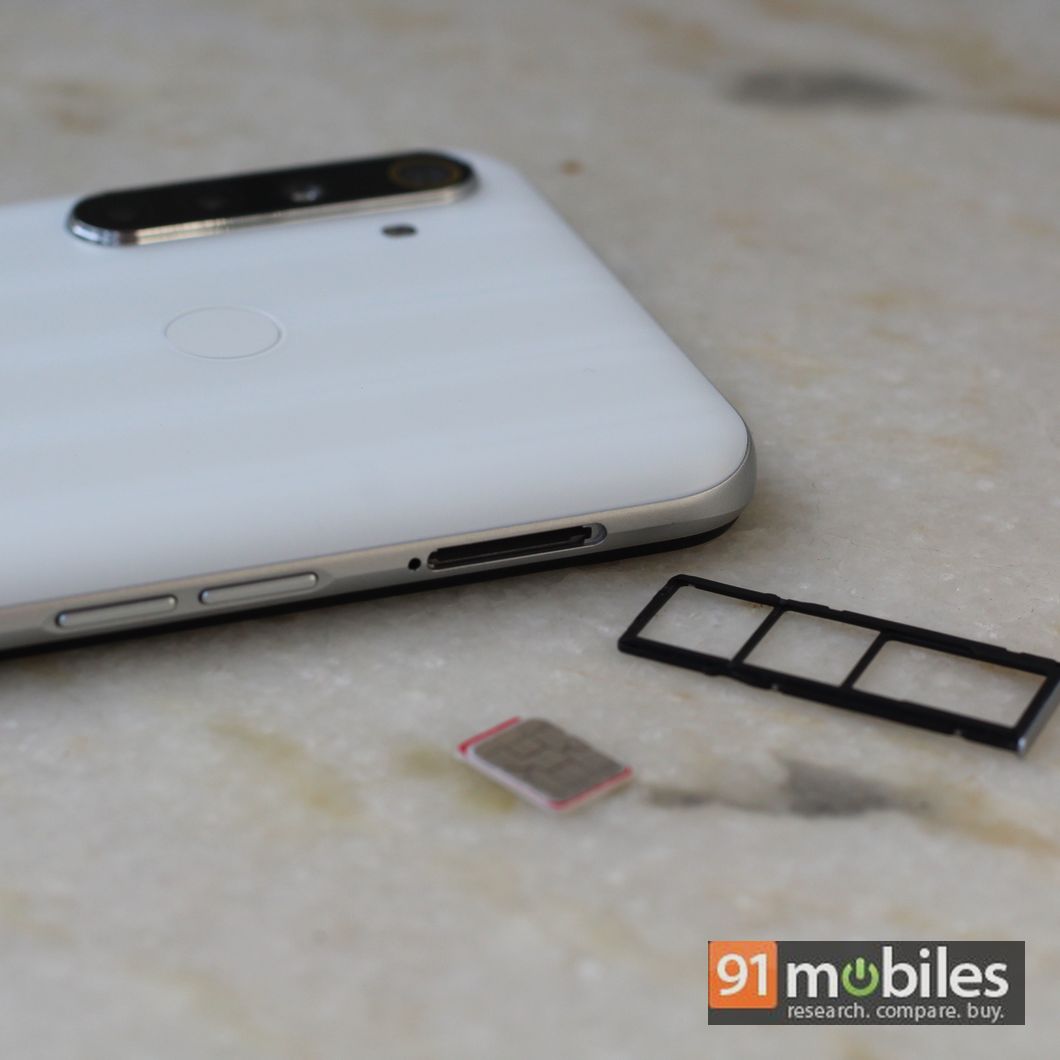 The Narzo 10 comes with a quad camera setup that is very similar to the one on the Realme 5 Pro. The main camera uses a 48MP Samsung sensor (the Realme 5 Pro uses a Sony sensor). This is accompanied by an 8MP 119-degree ultra wide-angle lens, a 2MP macro lens that allows you to take close up shots (4cm) and a 2MP mono lens. This is a pretty solid camera setup for an affordable mid-range smartphone, but definitely not the best cameras you’ll find in this segment. 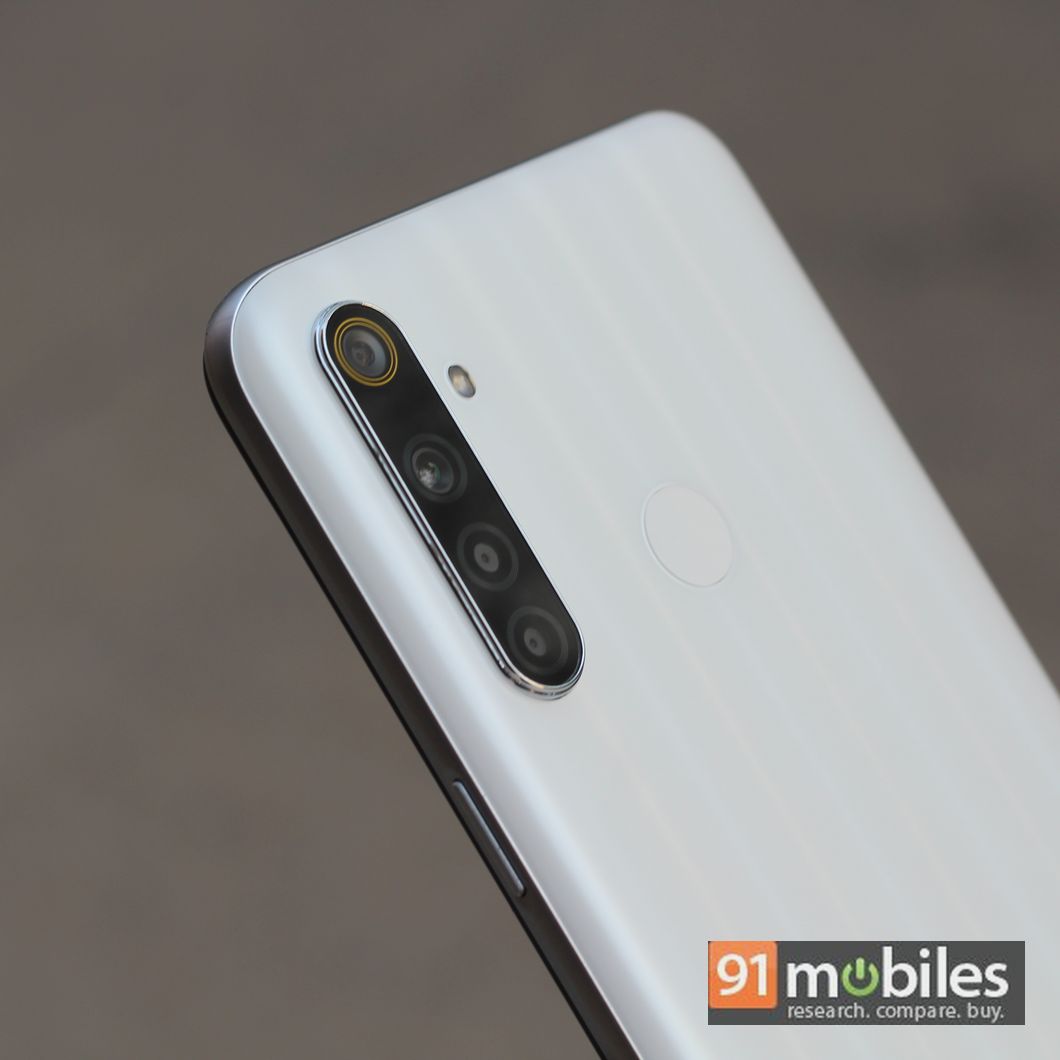 By default, the main camera shoots in 12MP and uses pixel binning make photos look brighter and clearer. There is also a 48M mode that lets you shoot raw 48MP photos. However, we didn’t find a lot of benefit in shooting in 48MP as cropping the image would offer the same clarity as a default 12MP binned photo would. The camera app is fairly easy to use with modes like Photo, Video, Night, Portrait found below the viewfinder. You can scroll through the bottom carousel till the end to find the ‘More’ option that will allow you to select modes like Time Lapse, Ultra Macro, Slo-Mo, Pro mode and Panoroma. 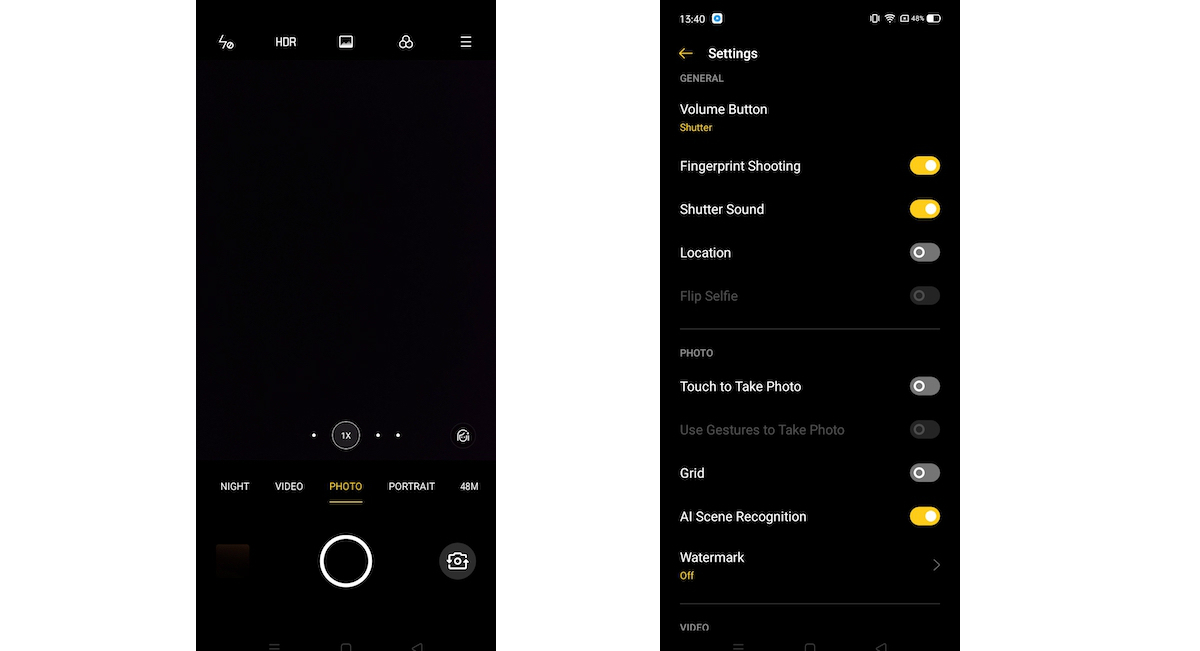 The main camera can capture some really good-looking shots in daytime in the default 12MP mode. Using a combination of HDR and Chroma Boost, you’ll be able to capture crisp photos with saturated colours. At times, the AI can artificially boost colours a bit too much and you’ll prefer more natural-looking colours with Chroma Boost turned off. The Night mode helps in capturing decent nighttime shots as it reduces noise and balances exposure levels to make the photos appear clear. The camera offers really good dynamic range as we were able to capture some attractive photos in tricky backlit shots.

The wide-angle lens did not impress us much. While it’s always a handy camera mode to have, wide-angle shots typically look darker and lack clarity compared to the main sensor. We also noticed a lot of blurring around the edges of wide-angle photos. The lens is pretty much unusable in low light conditions. We also wish Realme allowed one to easily switch to the wide-angle lens by pinching the viewfinder as manually tapping the mode would sometimes not work properly. The lockdown meant the subjects that we could photography were limited, but it did give us a chance to be more creative. This is probably why we enjoyed using the 2MP macro lens quite a bit. During daytime, you can capture some really impressive close up shots of flowers or objects. As long as you don’t zoom into these photos, you will be pretty happy with the results.
With the 16MP selfie camera, you can capture sharp selfies with natural skin tones and good colour reproduction when there’s plenty of light around. Beauty mode is enabled by default, which smoothens your skin and results in softer facial features. The selfie camera also supports portrait mode, which is average at best. Indoors, selfies look softer, noisier, and generally unappealing.

The Realme Narzo 10 is the first smartphone to launch with the Helio G80 processor in India. This is an octa-core chipset that clocks at up to 2.0GHz and is equipped with a Mali-G52 MC2 GPU, much like the Helio P65. The Helio G80 is not as powerful as the G90, but is a gaming-centric SoC that promises to deliver powerful performance in this price segment. In our Geekbench 5 test, the Realme Narzo 10 scored 385 in single-core and 1336 in multi-core, which are better than the scores delivered by the Helio G70-powered Realme C3 and the Snapdragon 665-powered Redmi Note 8.

Out of the box, the Narzo 10 felt pretty smooth while browsing through the UI and switching between apps, although we did find the touch response to be slow and some lag could be felt while scrolling through apps like Twitter, Facebook and Instagram. The smartphone does feel sluggish at times, but we did not encounter any app crashes during our review.

The Helio G80 is a gaming-centric chipset, so we put it to the test by playing some graphics-intensive games like PUBG and Asphalt 9. The maximum graphics settings on PUBG can be a combination of Balanced + Ultra or HD + High. In these graphics settings, our gameplay experience was good, but we did notice some stutters and lag at times. A 30-minute session did increase the phone’s temperature by 4-5 percent, but it never felt uncomfortably warm. 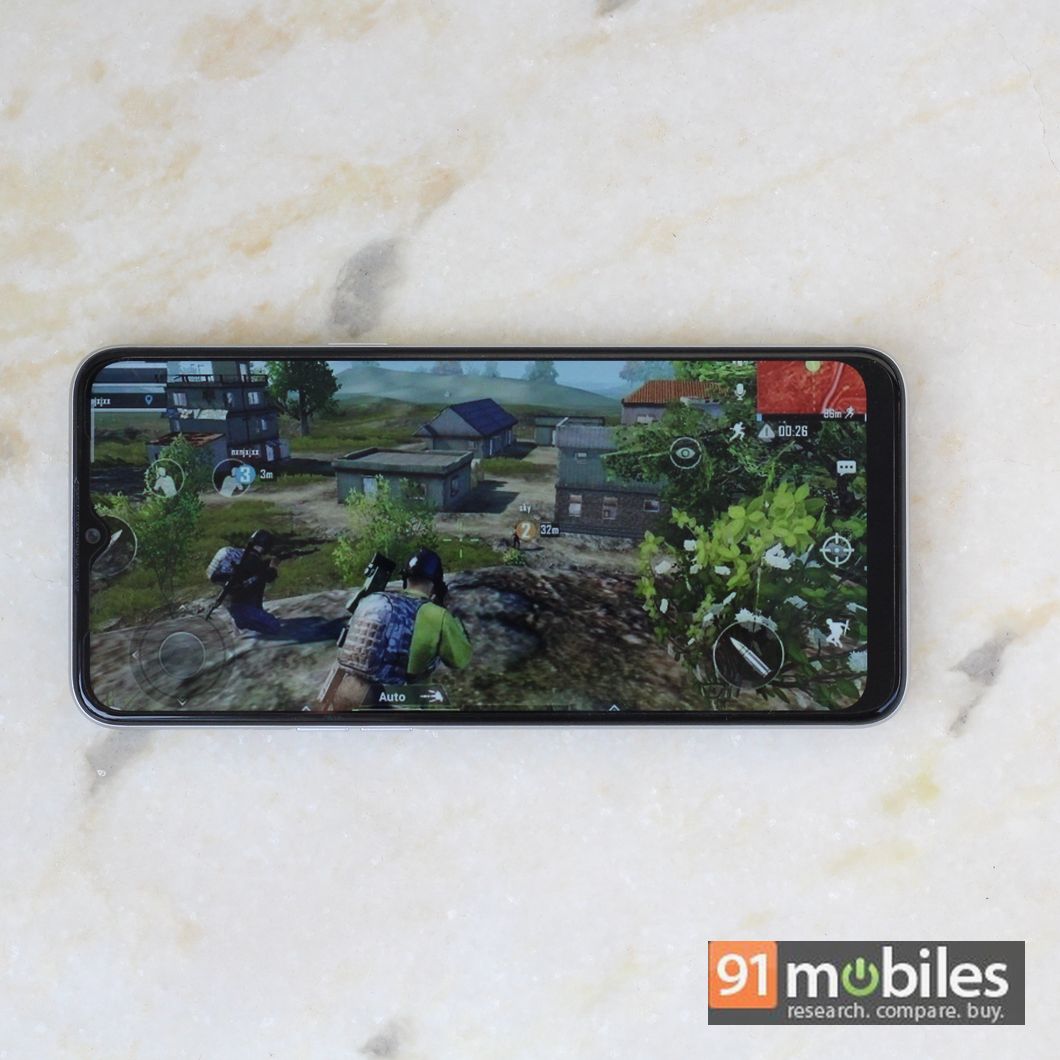 Network connectivity was on point while gaming and we didn’t notice much latency. This is most likely because of the HyperEngine game technology feature of the MediaTek Helio G80 chipset, which improves network reception and performance while gaming. However, it is worth noting that the Narzo 10 does not support dual-band Wi-Fi, which means you will not be able to connect to a faster 5GHz Wi-Fi network.

The smartphone ships with Realme UI based on Android 10. Realme UI tries to offer a cleaner look compared to ColorOS, but it still comes with a lot of pre-loaded apps, so ‘cleaner’ may be subjective here. We find it redundant to see all the apps on the home screen with the app drawer option. There are apps like DailyHunt, Helo, UC Browser and Realme’s own browser that come pre-loaded. Some of these apps send spammy notifications that can be disabled in Setting. While these are some problem areas, Realme UI also offers some helpful features like pure black dark mode, smart sidebar, and simpler notification toggles. 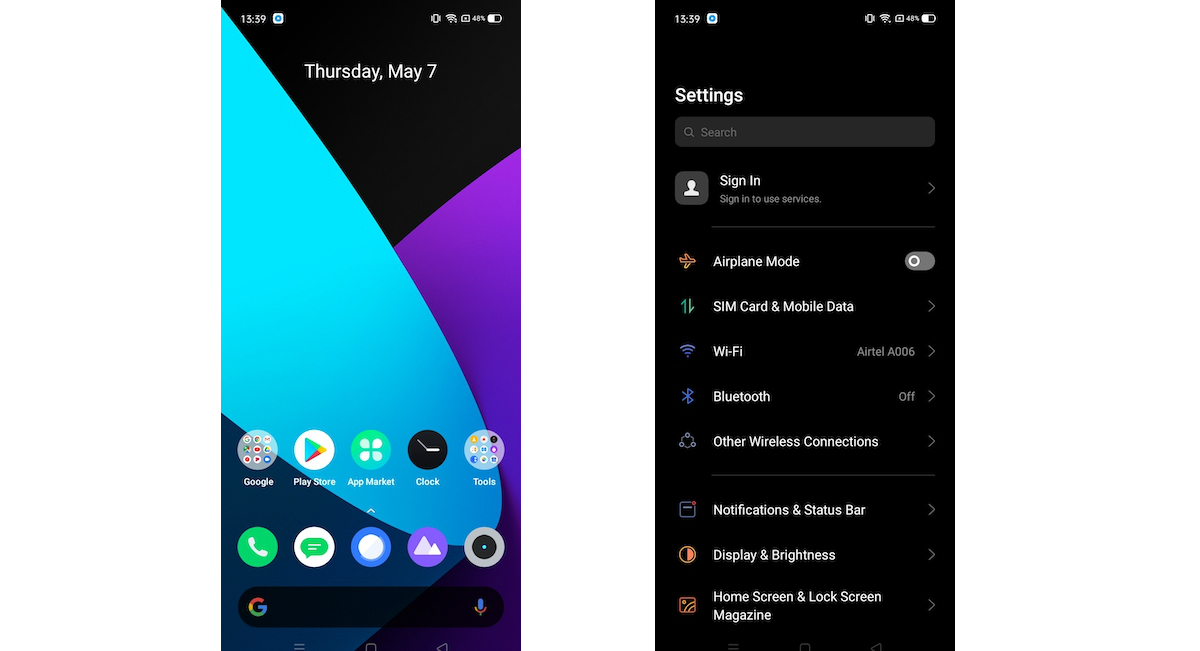 Talking about a few other aspects of the Narzo 10, we found the face unlock feature to be mostly accurate but not the fastest we’ve seen. Call quality over the earpiece was decent and we didn’t encounter any drops in connection. The bottom-firing speaker is loud enough for watching videos indoors, but sound quality lacks depth and vibrancy.

Realme Narzo 10 houses a 5,000mAh battery and supports 18W fast charging over USB Type-C. The battery is large enough to take you through a full day on a single charge with constant usage. If you’re not a heavy gamer or someone who watches a lot of content on the phone, the phone should last you through a day and a half with ease. In our PCMark battery drain test, the phone survived a little over 15 hours, which is respectable. 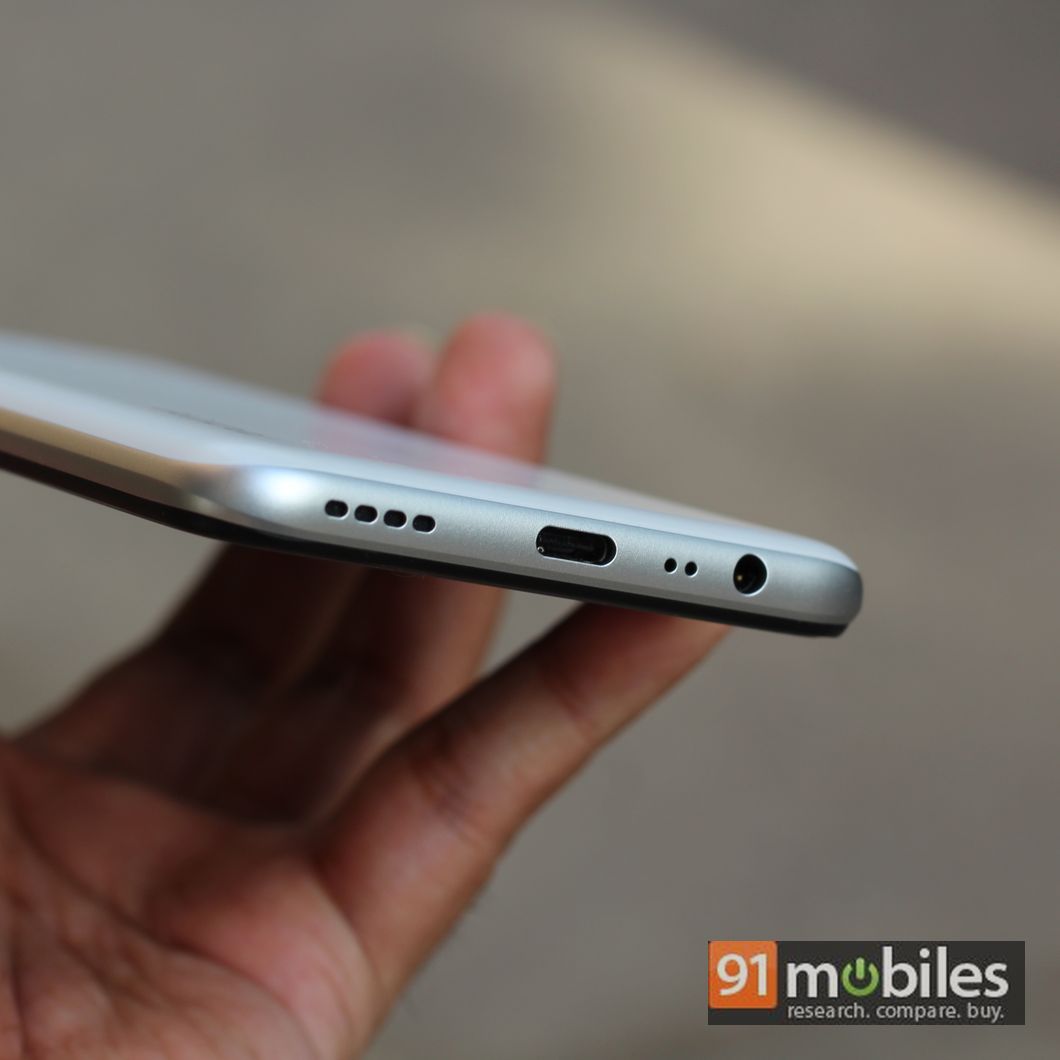 Despite the 18W fast charging support, the Narzo 10 takes a really long time to charge fully. Charging from zero to 80 percent takes roughly 80 minutes, after which it takes another 60 minutes to charge to 100 percent. This is done deliberately to preserve the phone’s battery.

The Realme Narzo 10 is a decent affordable smartphone from the company, but it does not offer much in terms of the ‘wow’ factor. It’s a phone that sits comfortably between the Realme 6 and Realme C3, and offers a few attractive features such as a matte finish design and the Helio G80 gaming chipset that make it stand out in the segment. It also gets a long-lasting battery and a decent 48MP quad camera setup.

That being said, the Narzo 10 feels like a derivative phone and we wonder why it had to be launched under a brand new series. It’s also clear that the revised GST rates have affected the pricing of the phone as it offers an HD+ display at Rs 12,000, which is a disappointment. It would be worth waiting for a Narzo 10 price drop before buying the phone.

Overall, the Narzo 10 is a decent sub-Rs 15,000 smartphone, but it is overshadowed by its own sibling, the Realme 6. For just Rs 2,000 more, the Realme 6 gets you a sharper FHD+ screen, a higher 90Hz refresh rate, a faster Helio G90T chipset and better 64MP quad cameras. These benefits make it worth spending a little extra on the Realme 6. You can also find the Redmi Note 9 Pro under Rs 15,000, which offers a more powerful Snapdragon 720G chipset and FHD+ display.