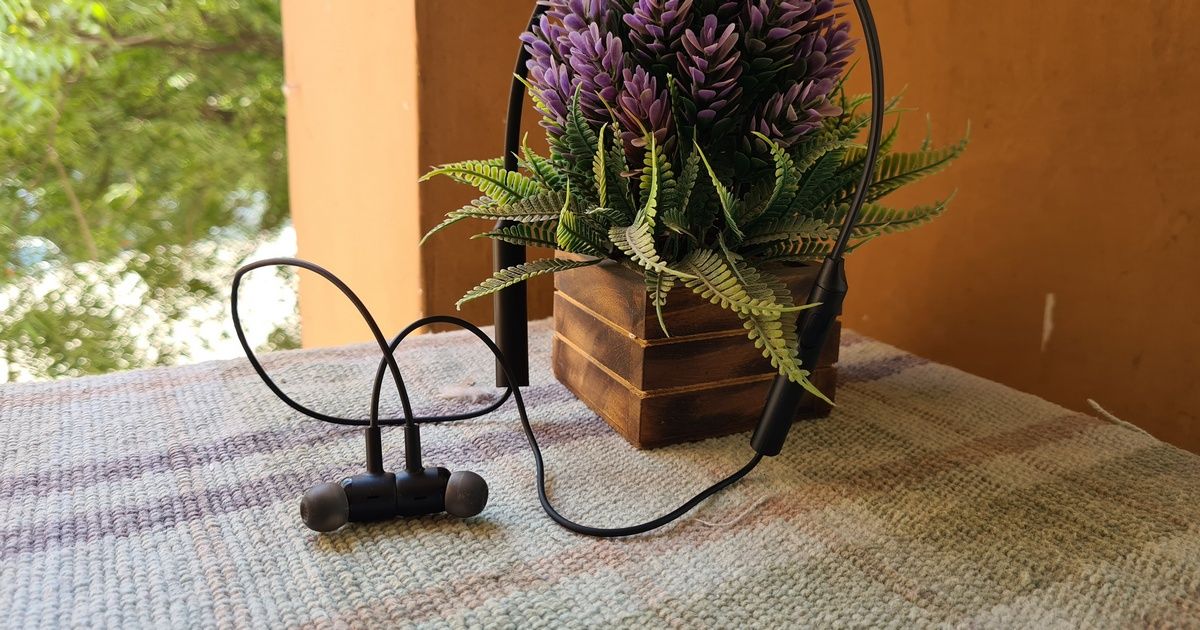 Xiaomi has been in the audio market for quite a while in India and it is one of the leading companies in the budget earphones segment. On Xiaomi’s online store you can find audio accessories across various categories such as TWS earbuds, wireless headphones, neckband earphones, Bluetooth speakers, wired earphones, and wireless earphones. Now, the company announced a new neckband-style wireless earphone under its Redmi lineup, which comes in the form of the Redmi SonicBass priced at Rs 999. With the audio market crowded with a ton of devices, it does make for a difficult decision to choose between them. Fortunately, Xiaomi has the power of a reputable brand name that has been cultivated by delivering quality products. Let’s have a look at what the SonicBass offers us in the full review. 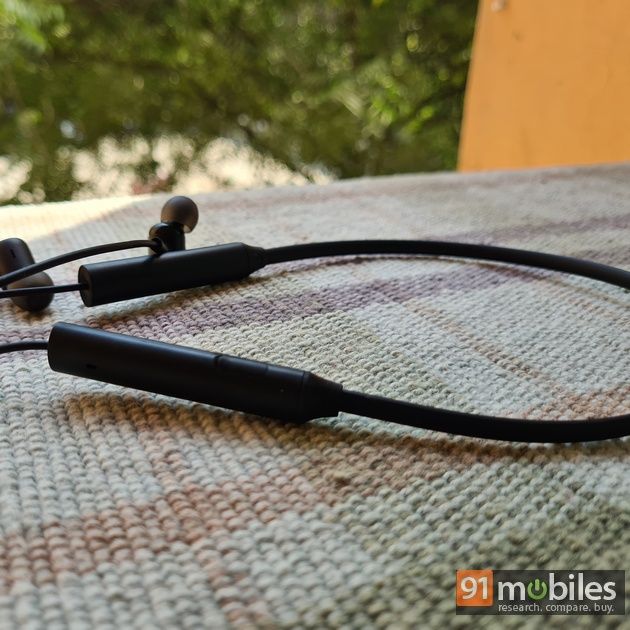 Similar to any of the countless neckband earphones in the market, the Redmi SonicBass makes use of a flexible band that sits around your neck and forms the base for the two earphone wires. I did try to contort the band into various shapes to test the durability and I came away quite impressed. At the end of the neckband is a bulbous extension which does not house anything on the left but on the right, you will find volume controls, the power button, and the charging port. Something unique about the earbuds is that it can pair with two devices simultaneously, a feature very few earphones can brag about at this price range.

The earbuds have a magnetic locking mechanism to stop them from flailing around when you’re walking or running around with the neckband on. However, unlike a few other wireless earphones, the magnetic lock does not initiate any kind of functionality such as turning the earphones on/off or entering into pairing mode when the earbuds are separated. This is a feature you would see on the OnePlus Bullets Z earphones which power off as soon as the earbuds click together and turn on when separated. To boot the Redmi SonicBass you have to use the dedicated button on the neckband. The same goes for pairing it with your smartphone. 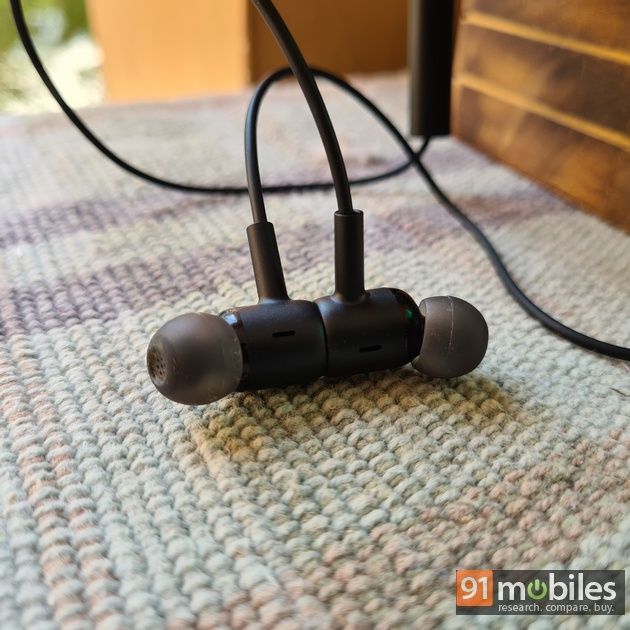 Apart from that, the sound quality on the earbuds happens to be exactly what you would expect on an affordable pair of earphones. The name SonicBass implies a heavy bass signature to the sound and I have to say that it is pretty thumping. Other aspects such as mids and vocals seem muted, but for someone with an affinity towards Classic Rock songs there won’t be much to complain about. I do like to listen to hip/hop and R&B genres, and the SonicBass has been quite wonderful in that regard, at least for budget earphones. Obviously, you cannot go in expecting too much out of the Redmi SonicBass but I can assure you that you will not come out disappointed. 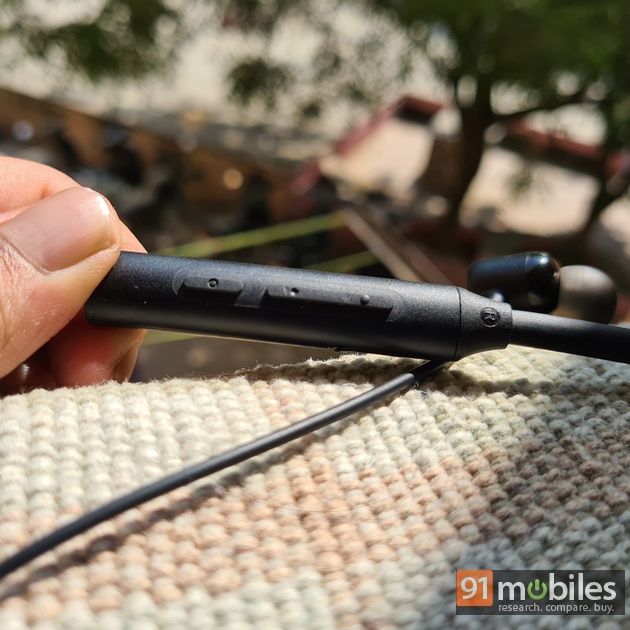 The earphones support most major codecs except for aptX, such as HFP, A2DP, HSP and, AVRCP. There’s Bluetooth 5.0 connectivity for lower latency and better signals while consuming less power thanks to Bluetooth Low Energy (BLE) technology. Speaking of battery life though, the SonicBass is rated for nearly 12 hours of continuous playback on a single charge. During my usage, I was getting somewhere around 10 hours which is still falls pale in comparison to the nearly 20 hours on the Bullet Z. You charge the device via the micro-USB port present on the neckband and it will take about 90 minutes to juice up completely. Also, the earphones are IPX4 rated for water and dust resistance so you can take them out for a sweaty workout. 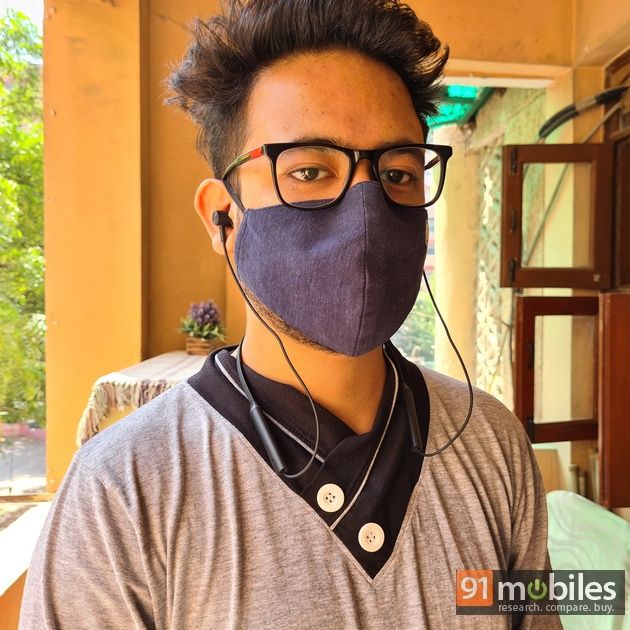 Overall the Redmi SonicBass has a decent sound signature and should appeal particularly to bass heads. The all-black colour scheme and the flexible yet sturdy neckband design wins brownie points and the Dual pairing mode along with the 10-hour battery life is really the cherry on top. The only thing that I have a complaint about is the magnetic attachment of the earbuds. Not only the OnePlus Buds Z, but a number of wireless neckband earphones make use of this simple feature that easily allows you to turn on/off and pair/unpair the earphones. That said, the Redmi SonicBass are priced very affordably, so this isn’t really a deal breaker. If you don’t mind that extra one second it takes to power the earphones on physically, you will be pleased with the Redmi SonicBass and the more than immersive audio experience it offers for the price.