It’s no secret that Redmi is among the more popular smartphone vendors and the company has a commanding grip over the Indian smartphone market. With that said, the brand is now hoping to replicate the same success in the laptop segment too, and recently announced the RedmiBook series of notebooks in India… headlined by the RedmiBook 15 Pro. As I mentioned in my first impressions, I was impressed with the laptop’s performance, albeit was left wanting for more from its display. But, having spent some more time with it, I can conclusively say whether you should, or shouldn’t buy the laptop. So, in this review, let’s see if the RedmiBook 15 Pro is worth your dinero.

Redmi has come up with some rather unique-looking phones but unfortunately, the company’s first laptop hasn’t gotten the same treatment. As such, the RedmiBook 15 Pro has been constructed in its entirety using polycarbonate and the device looks quite utilitarian. While I’m all for a subtle, minimalistic design ethos – which is what the RedmiBook 15 Pro is gunning for – I feel that the notebook lacks a distinctive personality. 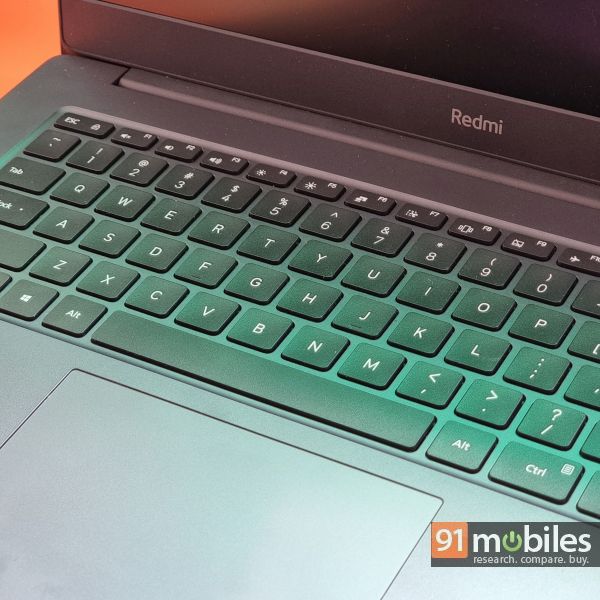 In fact, barring its slightly different Charcoal Grey hue, the laptop doesn’t have a lot going in the design department. Rest assured, if you were looking for a laptop with an understated and – for the lack of a better word – humdrum design, then the RedmiBook 15 Pro will be right up your alley. 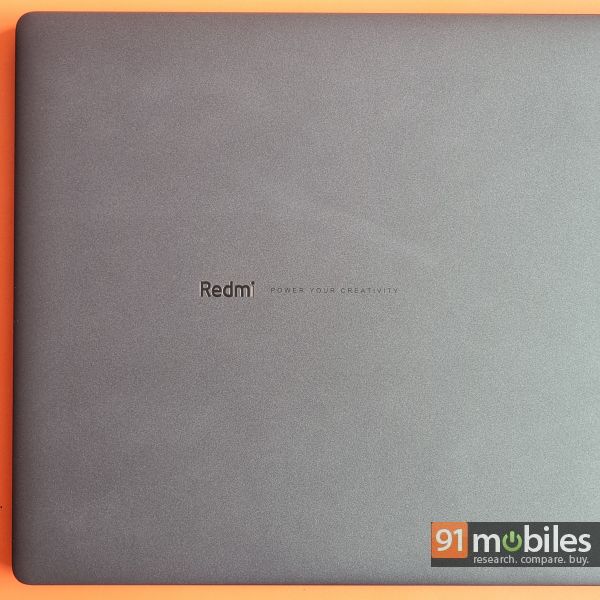 I should add that the RedmiBook 15 Pro is a tad chunky too. What’s more, at 1.8kg, the device isn’t feather-light either, so you’ll definitely feel its weight when you’re lugging it around in your backpack. That said, the laptop’s chassis is quite stiff and I didn’t notice it flex around the keyboard deck. The hinge mechanism for the display offers ample friction too, so the panel won’t wobble when you’re using the machine on your lap. What’s more, the laptop’s excellent weight distribution allows buyers to open the lid with just a finger, which is neat. 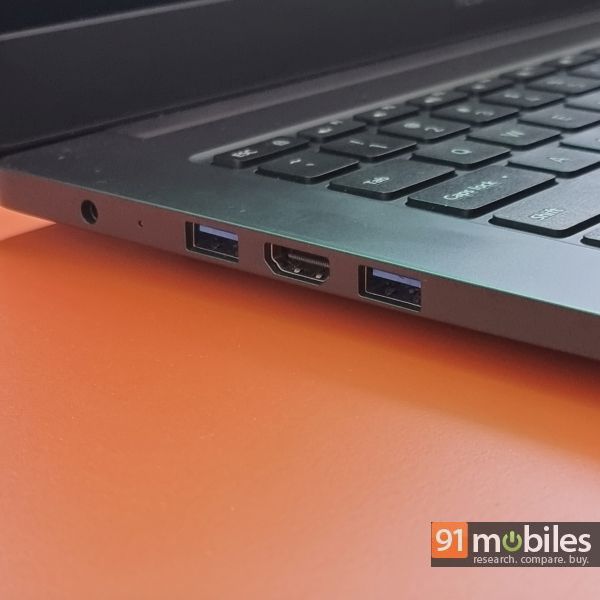 At first glance, the I/O situation looks promising too. In fact, the RedmiBook 15 Pro touts a USB 2.0 port, two USB 3.2 Gen 1 Type-A ports, a LAN connector, a full-sized SD card reader, and an HDMI slot. If you were looking for the USB Type-C spec, then I hate to break it to you – the laptop doesn’t have any Type-C ports. That’s a big omission, especially for a laptop priced around the Rs 50K mark. But, I digress.

The RedmiBook 15 Pro’s keyboard has a lot going for it. For one, it offers an accommodating layout with well-spaced keys and a generous wrist rest. Furthermore, the keys offer ample travel, and are about as ‘clicky’ as it gets for a laptop priced below Rs 50K. And, as prefaced previously, the keyboard deck is quite sturdy, so you won’t feel it flex or warp below your wrists. But, much like the Mi NoteBook 14, the RedmiBook 15 Pro’s keyboard lacks backlit LEDs, which will surely alienate the laptop from its target audience that includes students and office-goers. 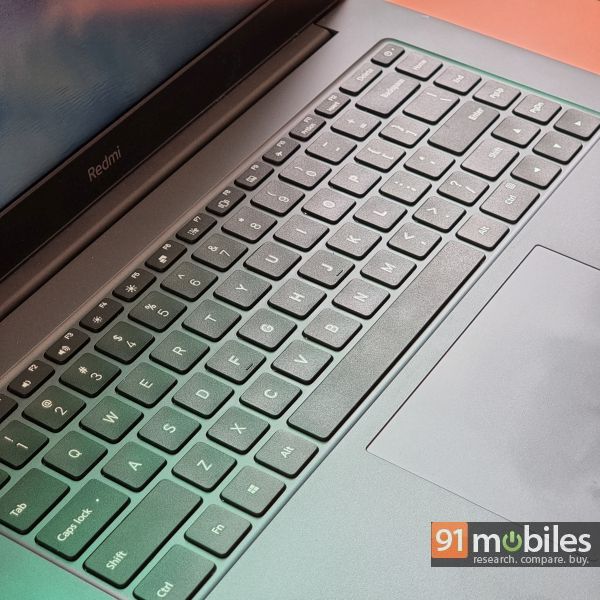 The trackpad, on the other hand, is fantastic. The unit offers generous space to use multi-finger gestures and comes with support for Windows precision drivers as well. The trackpad’s surface felt smooth to the touch as well so all in all, you won’t have any complaints from the laptop in this department.

The RedmiBook 15 Pro’s Achilles heel is undoubtedly its display. While the panel checks a lot of boxes on paper and comes toting an expansive 15.6-inch viewing area with Full HD resolution, the unit’s colour reproduction leaves a lot to be desired. In fact, the laptop exhibits a clear blue cast which is evident almost immediately after you turn on the machine. The colours appear washed out, and you can only use the screen at a 95-100 degree angle as the visibility is marred if the hinge is positioned at any other angle. What’s more, the display doesn’t get too bright and I struggled to use it outdoors. 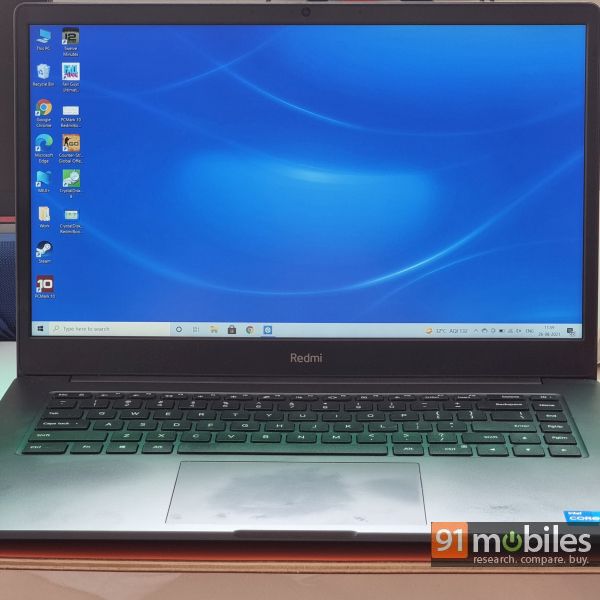 Now, is the panel unusable? Of course not. In fact, if this is your first laptop, or you just need a reliable machine to crunch numbers, then the RedmiBook 15 Pro’s display will suffice. The same goes for the unit’s two 2W downward-firing speakers too, which get plenty loud for watching movies on the fly, but lack depth and feel a bit hollow. Of course, the laptop has a few redeeming qualities so now, let’s take a look at its performance.

The RedmiBook 15 Pro is backed by an 11th Gen Core i5-11300H processor that works alongside 8GB of DRR4 memory and a 512GB NVMe SSD. Suffice it to say, the RedmiBook 15 Pro is among the fastest notebooks in its price segment, and it shows. Let’s start with the benchmarks and here, the laptop scored an impressive 4,507 points in PCMark 10. Turn the page over to CrystalDiskMark and here, the unit’s speedy SSD net sequential read and write speeds of 1,545.75MB/s and 1,275.24MB/s respectively. 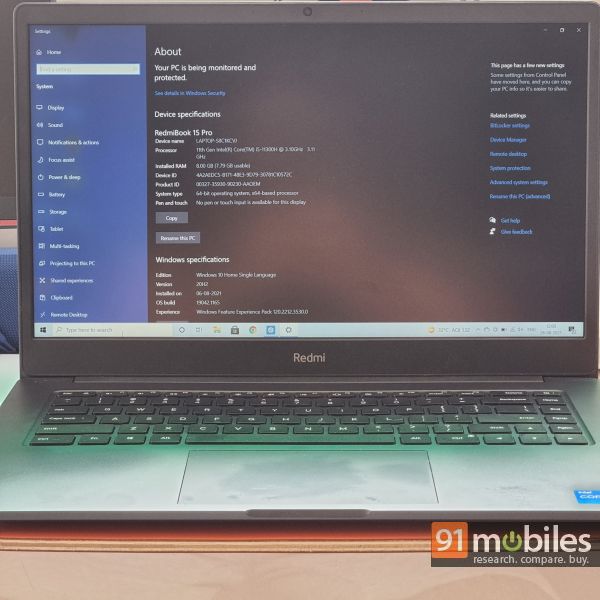 And, sure enough, the laptop’s fantastic benchmark scores translate into dependable everyday usage too. For instance, I didn’t notice any hiccups in the performance when going about my usual workflow on the machine, which involves using a slew of apps like Slack, Adobe XD and Word in conjunction with Chrome (which almost always has over a dozen tabs open). Despite that, the laptop barely showed any signs of struggle. Now, I did try my hand at gaming on the machine. To that note, the laptop’s integrated Iris Xe GPU cannot hold a candle to its Vega or MX counterparts. Take Fall Guys for instance, which even with all the settings set to low, barely managed over 30fps in-game. The same goes for Counter-Strike: Global Offensive as well, which netted 20-25fps with the graphics preset set to low. Basically, you’ll have to shell out more bucks and opt for a different machine if you want to game on the go. 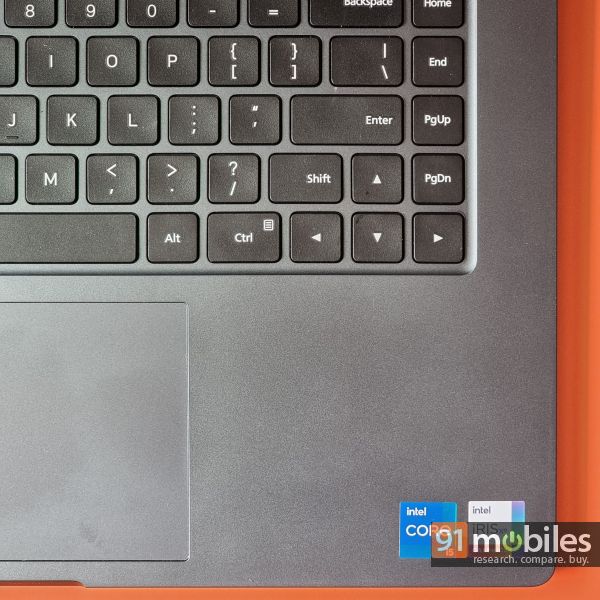 The RedmiBook 15 Pro ships with a 46Whr battery which managed to last me a little over six hours off a single charge. As prefaced previously, my usage was, for the most part, limited to communicating with the editorial team via Slack, Microsoft Word, and using Google Chrome. Rest assured, you can push through a full workday on the unit if you limit the laptop’s brightness and play with different performance toggles a bit.

The RedmiBook 15 Pro retails for Rs 49,999 and for the price, offers a robust design and oodles of performance. That said, Redmi has made some omissions to bring the cost of the machine down. The laptop’s display, for one, is just not up to the mark and the lack of other niceties like a backlit keyboard or a USB Type-C port will surely make prospective buyers second-guess their decision. Now, if all you need is a workhorse to plow through the day, then the RedmiBook 15 Pro will not disappoint you, as it can surely get work done fast.