I have never shied away from criticising mid-tier smartphones from Samsung. Although the company has been making some exceptionally good smartphones in the premium segment such as the Galaxy S8 (review), I’ve mostly found the Korean giant’s offerings in the budget and affordable segment to be somewhat lacking. That was until I got my hands on the Galaxy J7 Pro (first impressions) and had to eat my words. Having spent two weeks with the smartphone in my pocket, I can say that the Galaxy J7 Pro managed to impress me quite a bit and in this review, I’ll be breaking down if it is a good buy for you or not. 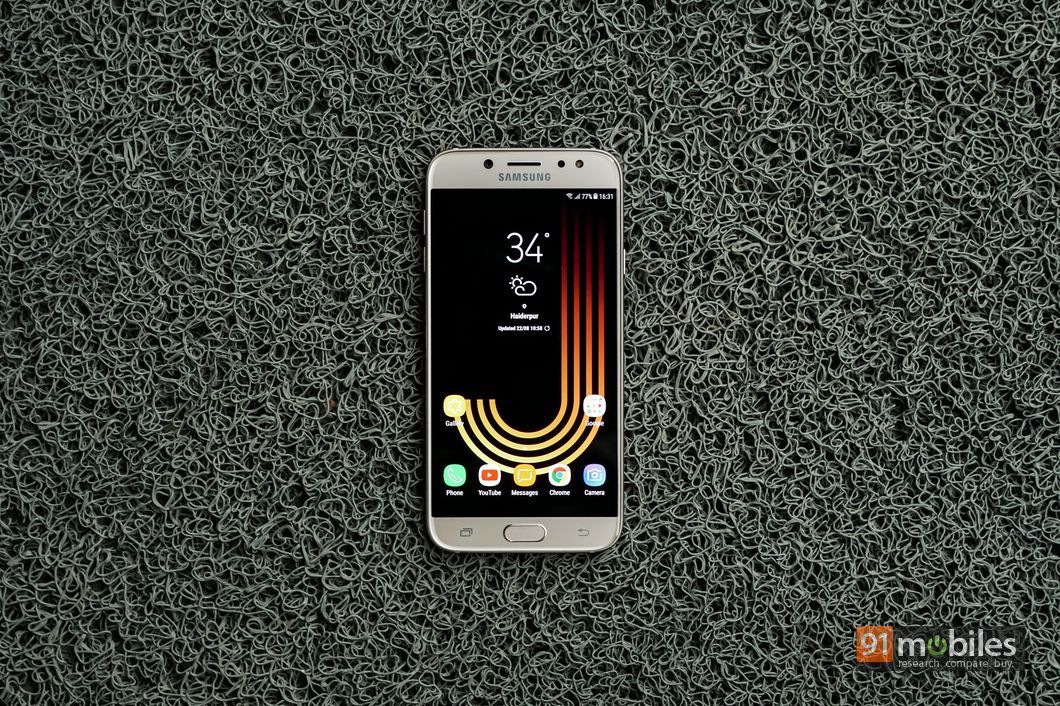 Here’s some food for thought – what makes a smartphone stand out in a crowd? The internal specifications of a device and the software it’s running are important, but a captivating design is what draws customers to it in the first place. After all, your smartphone will be your most used gadget until you upgrade it, so why carry a device which looks like a slab of metal in the first place? Samsung has been designing some good-looking smartphones as of late and the Galaxy J7 Pro has gotten the full ‘premium looks’ treatment from the company. The J7 Pro has been constructed out of metal, and flaunts a seamless design which looks mesmerising, to say the least. 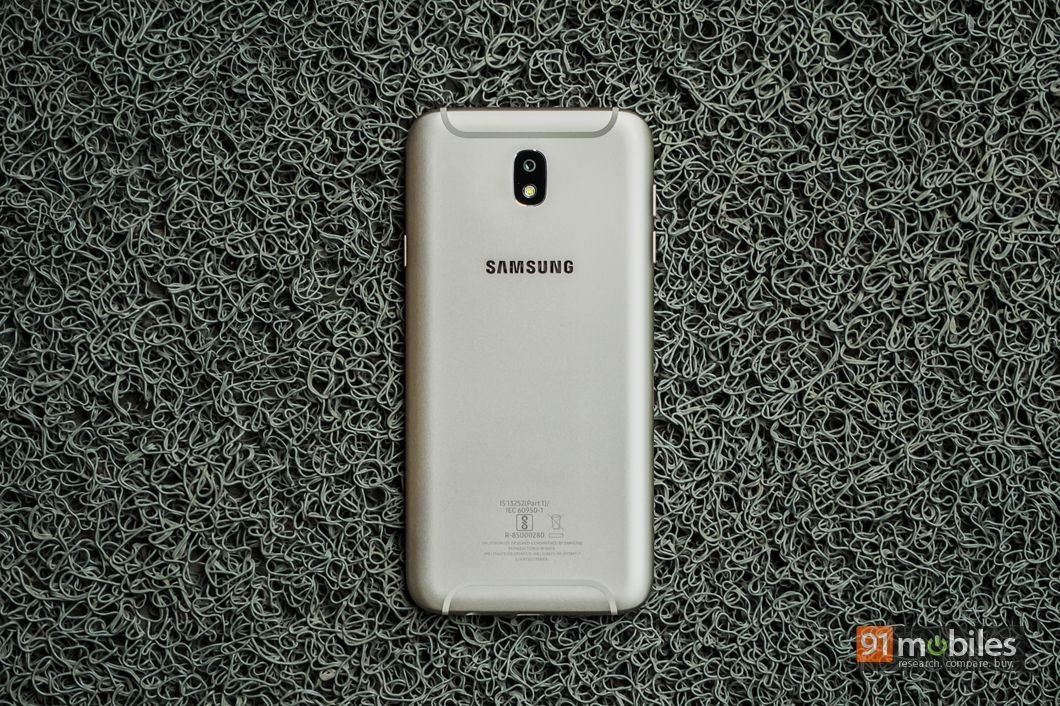 There’s an abundance of curves on the J7 Pro and the smartphone does well to flaunt them. The curvy back of the device made it nestle nicely in my palms and even causes the light to shimmer on the smartphone’s back when you place it flat on a table. Moving on, the 2.5D curved glass present up front disappears inside the frame of the smartphone, which brings about a pseudo bezel-less vibe to the J7 Pro. The corners have been precisely tailored too, ensuring that they don’t bite your palm regardless of how hard you grip the smartphone. The champagne gold variant of the J7 Pro I had for review looked classy and professional, but at the same time, the quirky antenna lines and the ovular camera module gave a funky spin to the smartphone’s design. Oh, and did I mention that there’s no protruding camera bump either?

On to some technical details about the smartphone’s design. The Samsung Galaxy J7 Pro is 7.9mm thick which doesn’t make it the slimmest smartphone in the world. However, the company more than makes up for it by adding in a massive battery (which I’ll talk about later in this review). Moving on, the handset weighs in at 178grams and feels nice and heavy in the hand. In terms of the button placement, you will find the power button positioned towards the right side of the smartphone. The left spine is home to discrete volume keys, a SIM tray that accepts a nano-SIM, plus another SIM tray which can house one SIM card and a microSD card. A micro-USB port, as well as the headphone jack, take up space at the bottom of the smartphone.

The top bezel above the display is the home to the selfie shooter, an LED flash module as well as the earpiece and some sensors. Below the display, buyers will find a physical home button which also houses the fingerprint sensor as well as a set of capacitive keys on the right and the left. The only thing I dislike about the smartphone’s design is that the capacitive keys don’t light up. Moreover, you cannot enable haptic feedback for the capacitive keys either. You eventually get used to them, but I would have preferred if Samsung hadn’t made this omission. The performance of the fingerprint scanner is quite impressive and the sensor is quite fast and accurate when it comes to authentication. 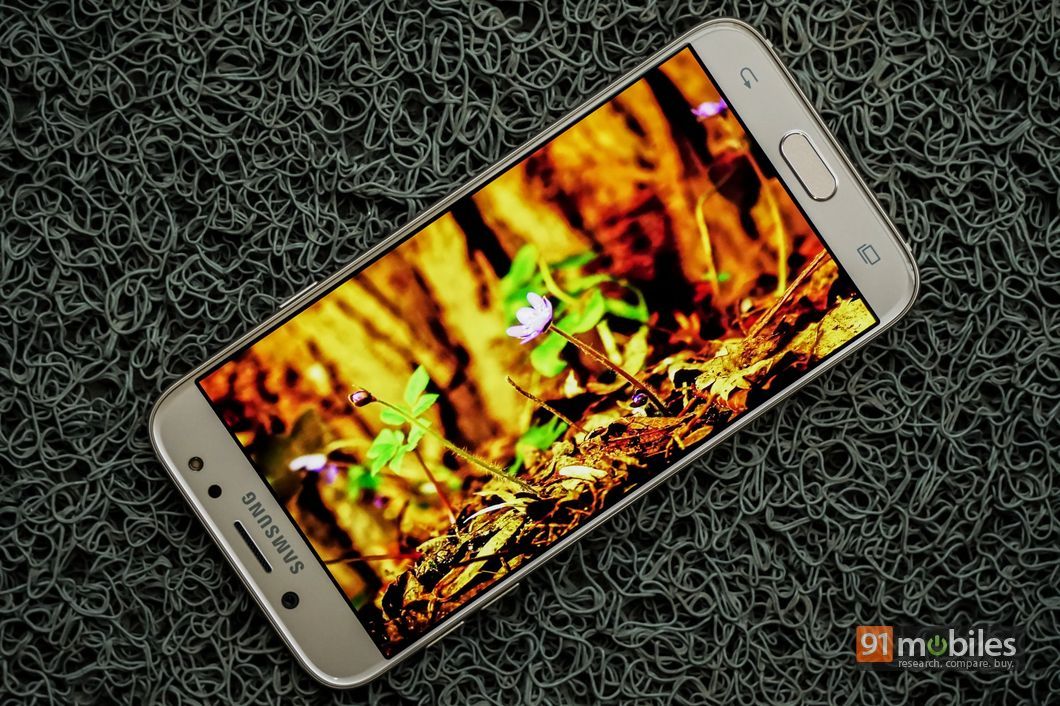 The Samsung Galaxy J7 Pro ships with a 5.5-inch full HD Super AMOLED display which offers punchy colours and crisp text. The display gets sufficiently bright (and dim) and is more than adequate for use under broad daylight. Samsung has even bundled a blue-light filter with the smartphone which can be enabled from within the settings to prevent eye-strain at night. The device also gets an always-on display which can be customised with up to three widgets. Seeing how the J7 Pro doesn’t ship with a notification LED, I’d recommend you leave it turned on as it has little-to-no impact on the smartphone’s battery life. 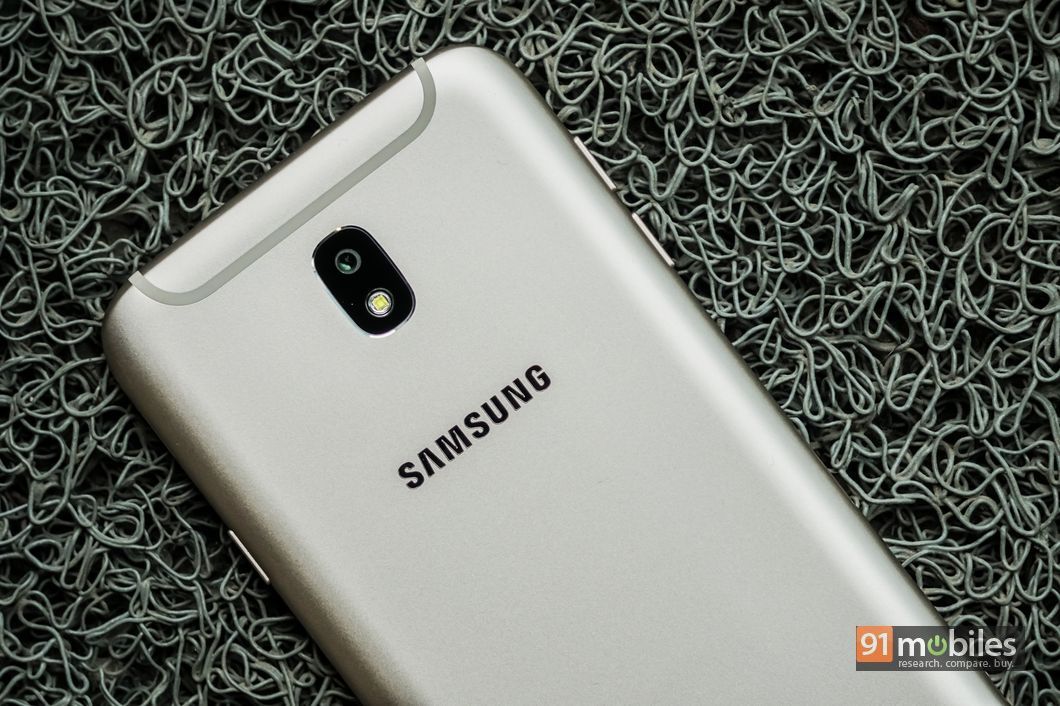 The Samsung Galaxy J7 Pro comes with a pair of 13MP sensors on the back and the front respectively. The primary shooter boasts a F/1.7 aperture whereas the secondary shooter comes with a F/1.9 aperture lens and both the shooters feature a dedicated LED flash module too. On paper, the Samsung Galaxy J7 Pro features capable shooters, however, before I dissect the smartphone’s camera performance, let’s look at the built-in camera app first. 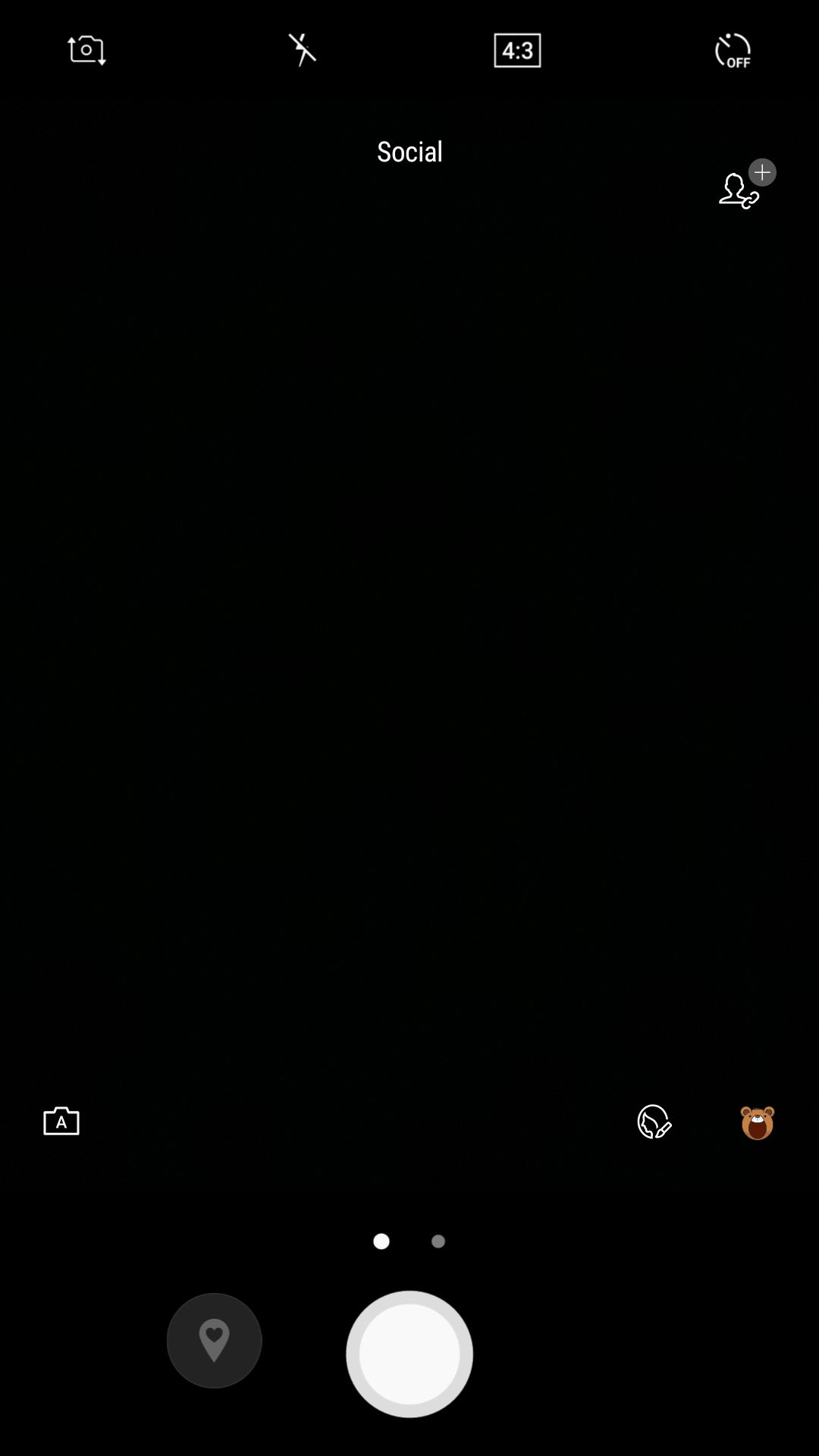 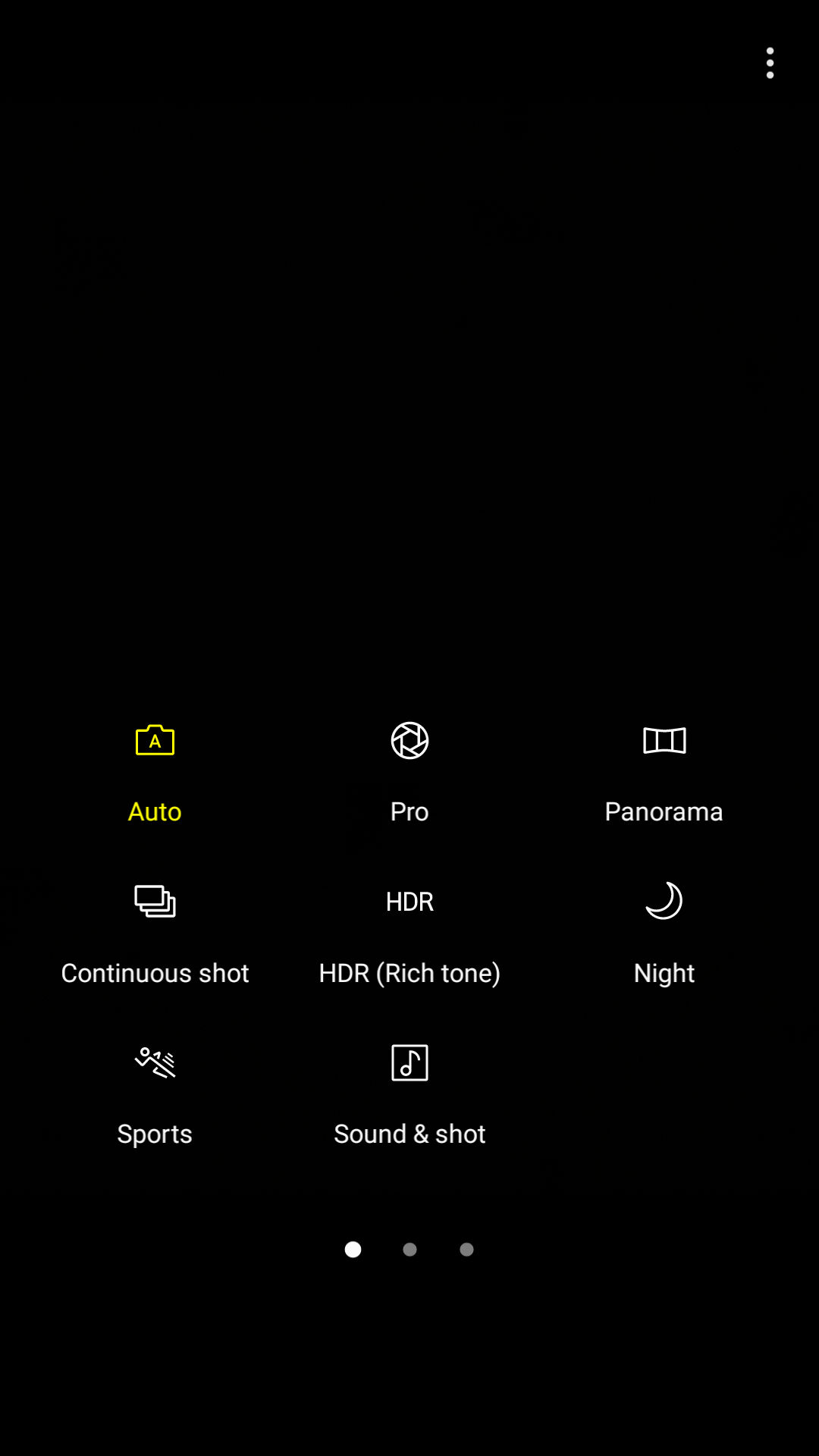 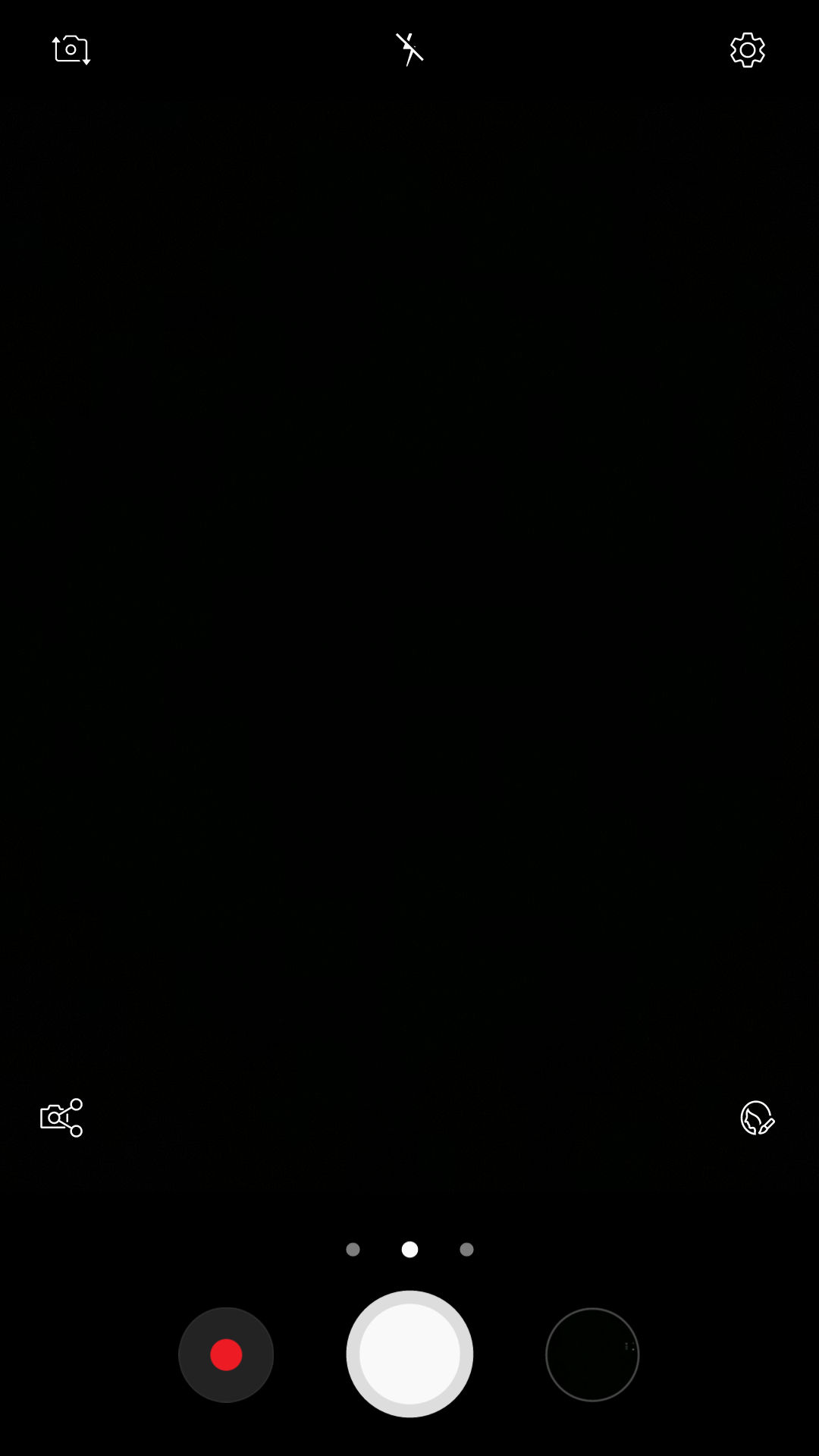 The camera app on the J7 Pro is a standard Samsung affair and comes with a bunch of modes for the rear camera such as a Pro mode, Sound and Shot mode and Panorama mode. The app in itself is minimal and doesn’t clog the viewfinder with different settings. One of the most talked-about features of the app is the Social mode, wherein you can share a picture you’ve clicked instantly on various social media platforms. The mode also allows users to make edits on the fly and even comes with a bunch of live stickers, similar to what we’ve seen on apps like Snapchat.

In terms of the overall picture quality, the Samsung Galaxy J7 Pro is a capable shooter and manages to capture vibrant images in broad daylight. The pictures I took with the smartphone were rich in detail, albeit slightly over-saturated to my eyes. However, the post-processing doesn’t take anything away from the shots. In fact, it makes certain objects pop out more and the end result should be pleasing to most users. The HDR mode on the smartphone works really well too and manages to bring out more details in the picture. A good example of the same is evident in the sample image I’ve posted above, wherein the details in the sky are more prominent. The low-light performance of the smartphone won’t blow you away, but the images aren’t all that bad and with a bit of editing, are perfectly acceptable by social media standards.

If you love clicking selfies and are a night owl, then you’ll be glad to know that the front facing camera of the smartphone shoots good portraits. Moreover, since there’s a selfie flash bundled with the J7 Pro, you won’t have to go through the trouble of finding a well-lit spot to click a picture at night. 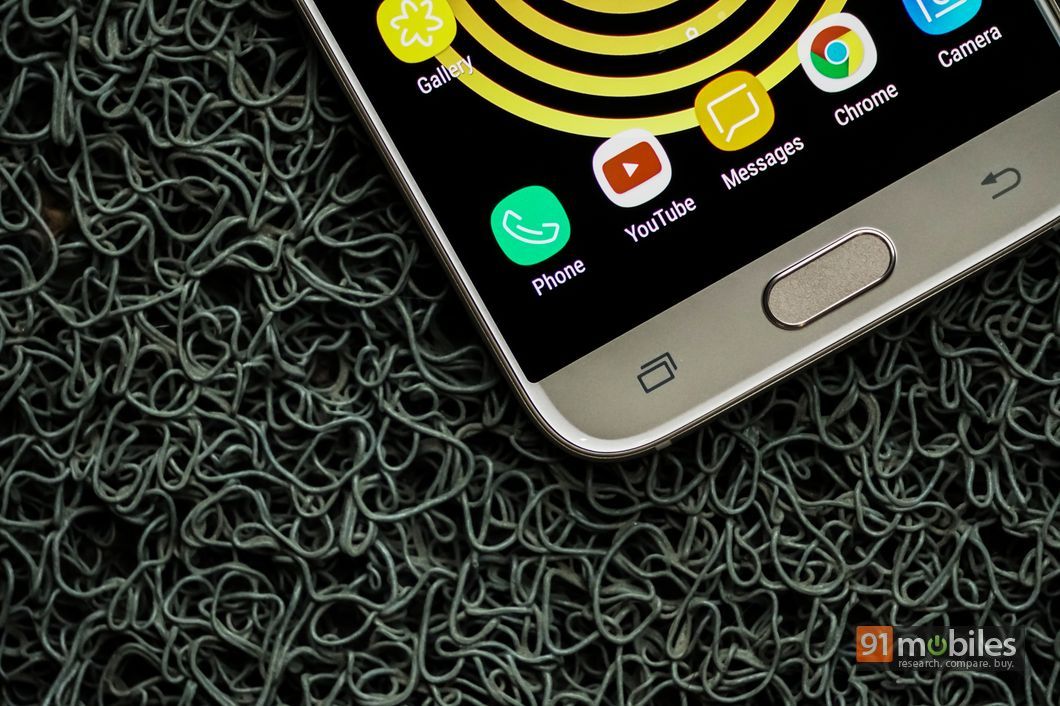 Buyers familiar with Samsung will know that the company uses in-house chips to power most of its smartphones. The same is true for the Galaxy J7 Pro, which is backed by an Exynos 7 7870 octa-core processor clocked at 1.6GHz. The handset gets 3GB of RAM, and by now, you might be wondering why you should pay Rs 21k for a smartphone with a year-old processor and just 3GB of RAM when we’ve got smartphones with faster chips and 8GB of RAM in the market. While the spec sheet might seem a bit disappointing on paper, let me assure you that it packs enough grunt to keep everything running smoothly for the most part. Once launched, regular apps work fine. That said, there’s some lag while opening the app drawer or swiping right to bring up the Briefing page. The smartphone isn’t bloat-free either and there are multiple accounts of duplicate apps on board the J7 Pro. 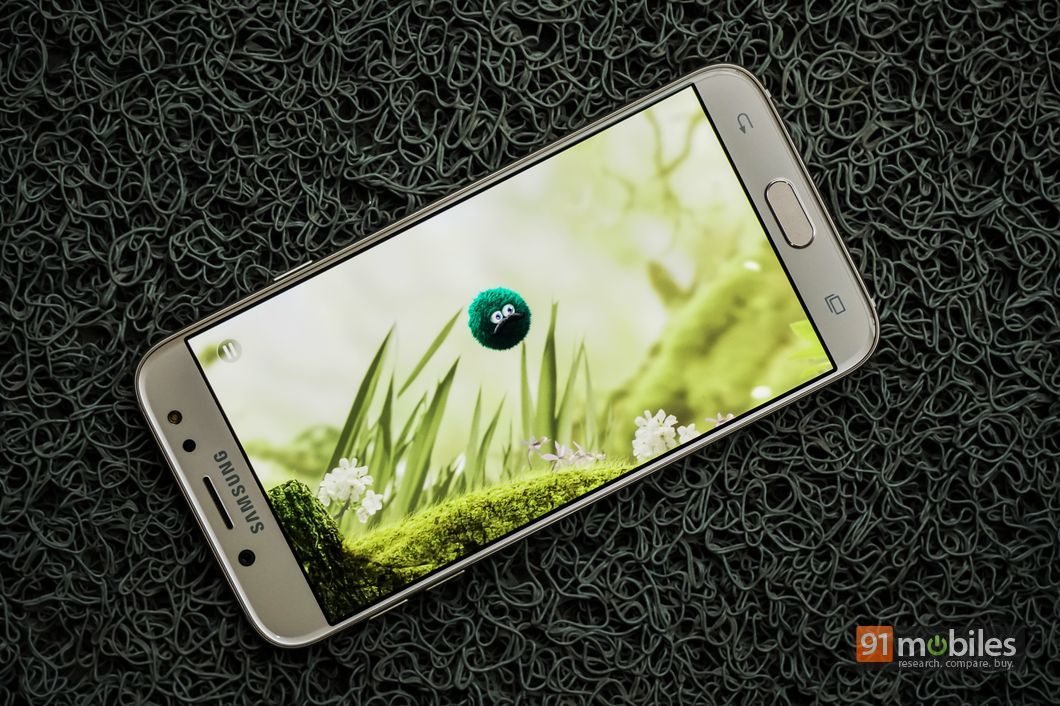 The gaming performance of the smartphone was also a little underwhelming. While you can comfortably play any game from the Play Store on the J7 Pro, intensive titles will require you to tone down the graphics settings if you want to achieve playable frame rates. On the bright side, the smartphone’s thermal management is excellent and the J7 Pro’s chassis managed to stay cool even after playing Clash Royale on the device for almost an hour.

On the software side of things, the Samsung Galaxy J7 Pro boots Android Nougat and runs a custom skin on top. The company’s skin looks quite streamlined and isn’t as bloated as it used to be in earlier iterations. 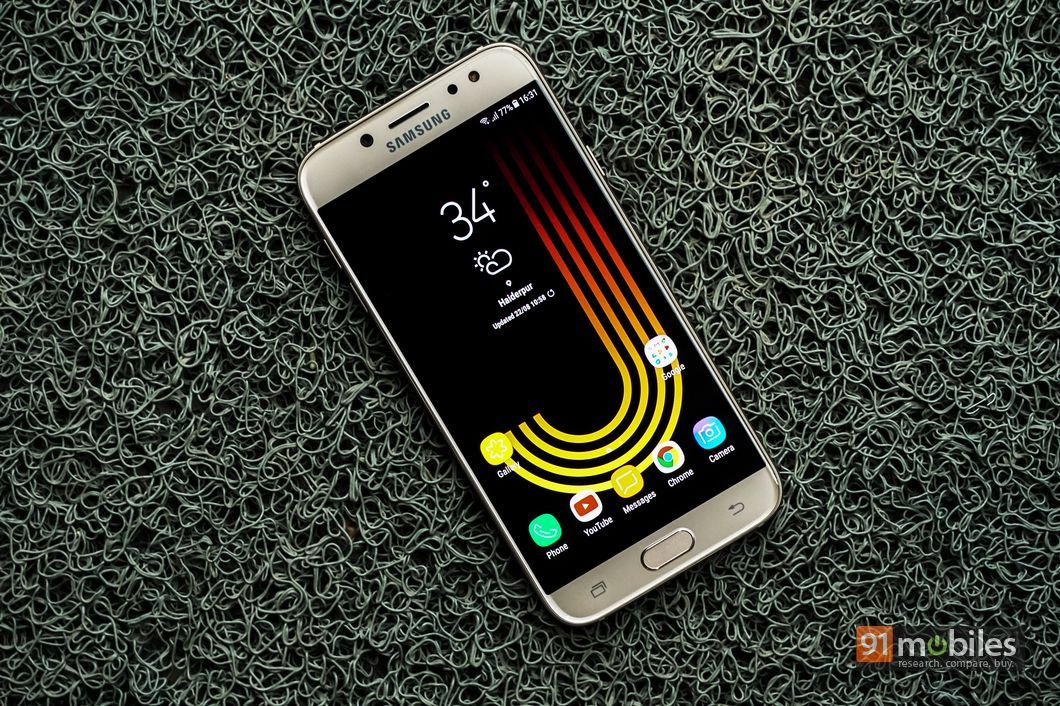 There are plenty of useful additions which are included in the software. For example, there’s Samsung pay, which allows you to go cashless and make payments via the credit/debit cards stored on your phone. Some other notable features include Secure Folder, which hides certain photos, videos or even apps from prying eyes. Swiping towards the right on the home screen will take you to Briefing, which works as a news aggregator and brings you stories from across the world. If, however, you prefer to get your news from some other source/app, then you can disable the Briefing page from settings too.

The battery life on the Samsung Galaxy J7 Pro is excellent. The handset comes with a beefy 3,600mAh unit which will easily last you a day on heavy usage. I managed to hit the 5-hour screen on time mark multiple times with the J7 Pro and you could even push the smartphone a bit further if you enable one of the power saving modes. In our video loop test, the J7 Pro managed to run for over 19 hours, which is one of the best results we’ve seen in this segment as of yet. 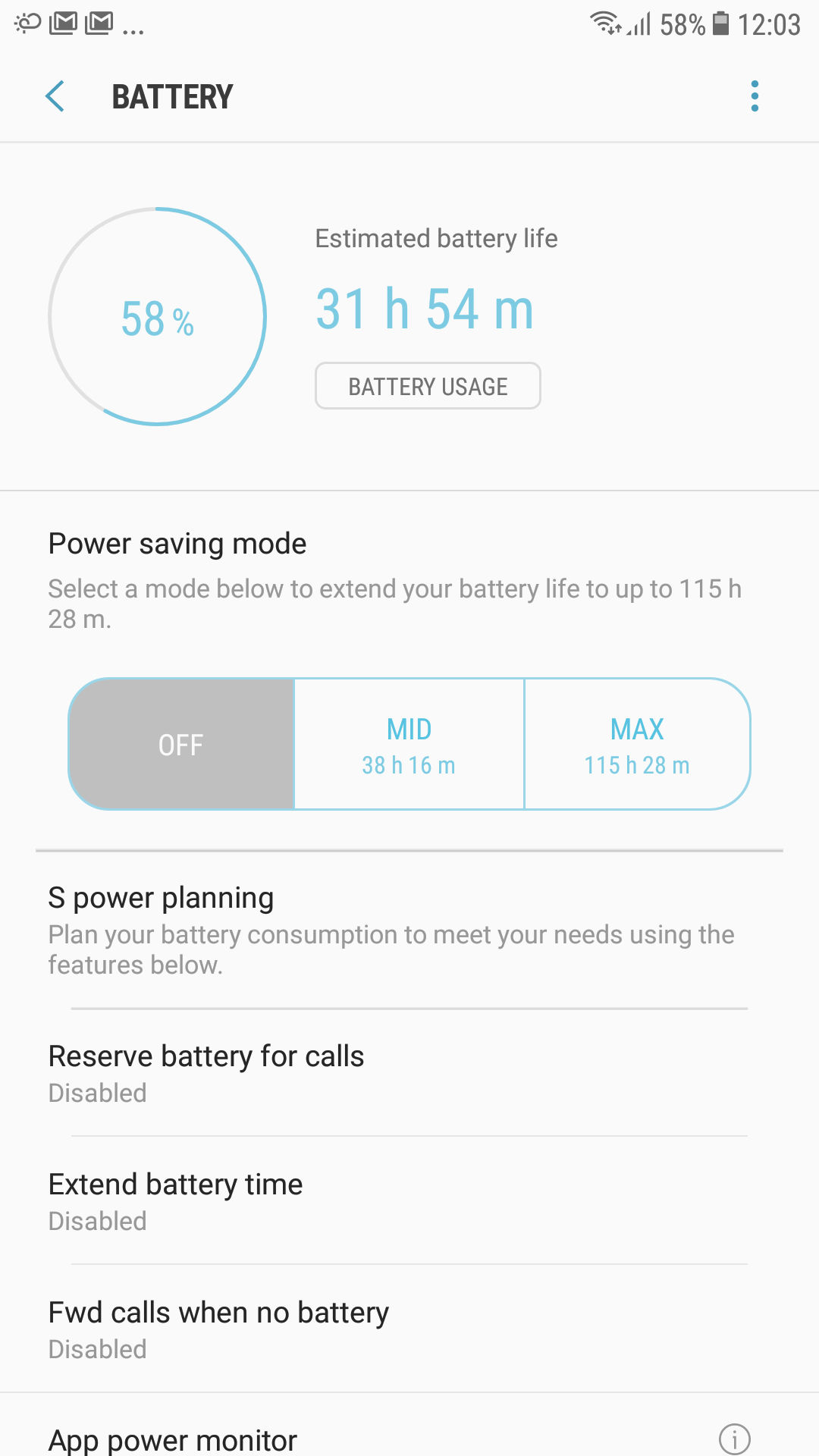 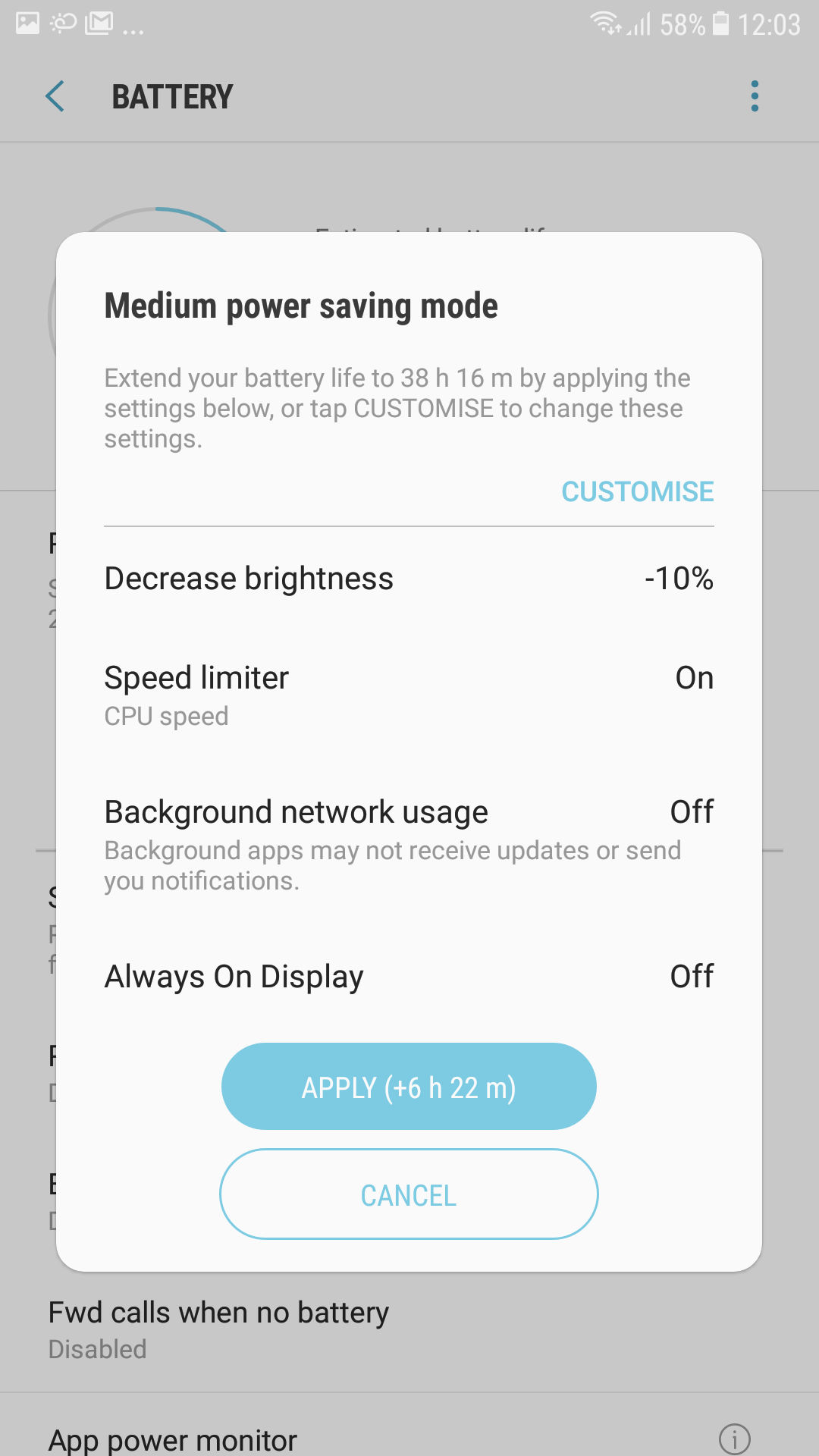 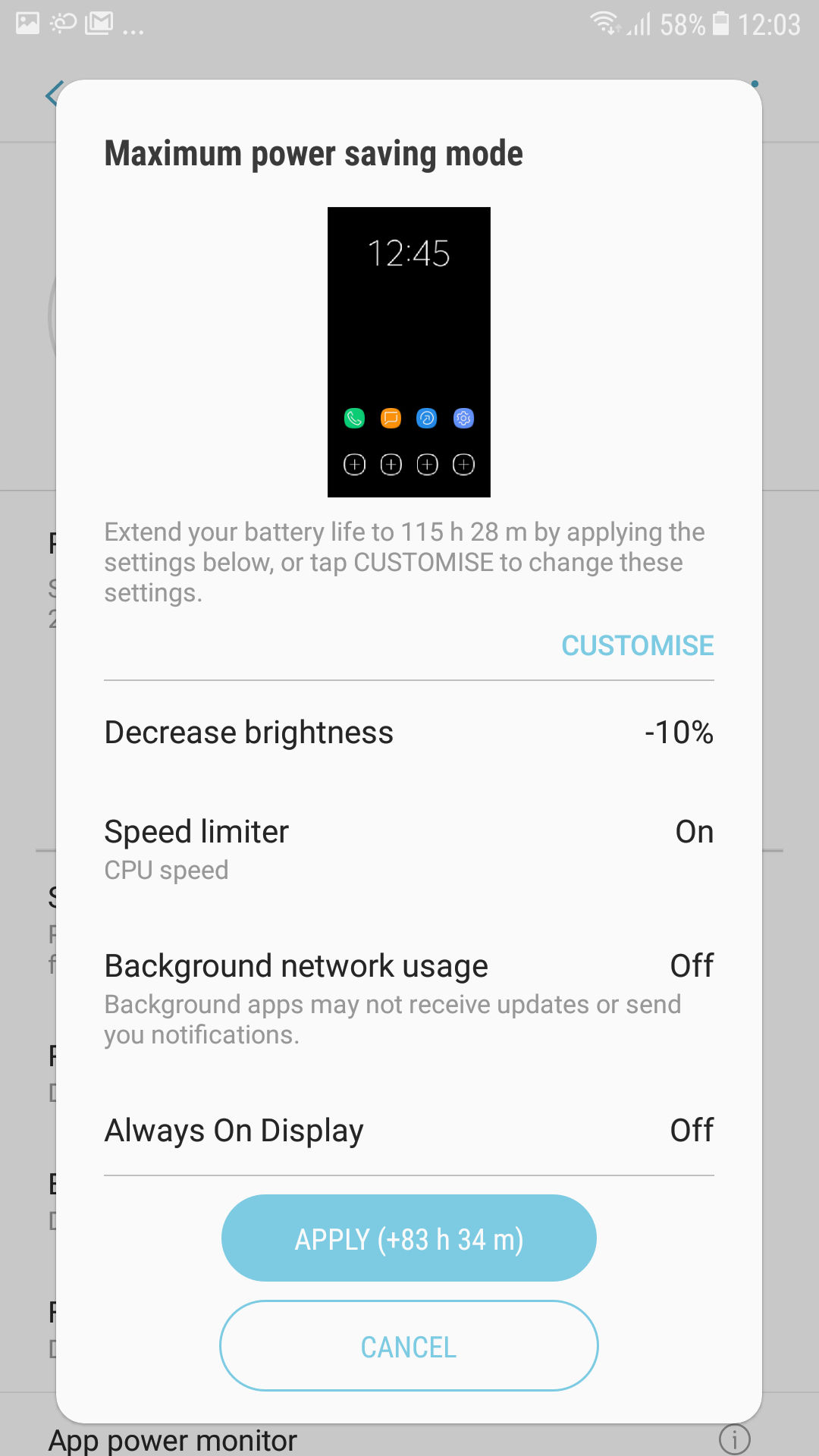 The connectivity options on the phone include NFC, Bluetooth, and Wi-Fi, all of which work as they should. The handset gets a single mono-speaker on the right fascia which is an odd place to position a speaker. However, the unit is sufficiently loud and crisp even at high volumes. 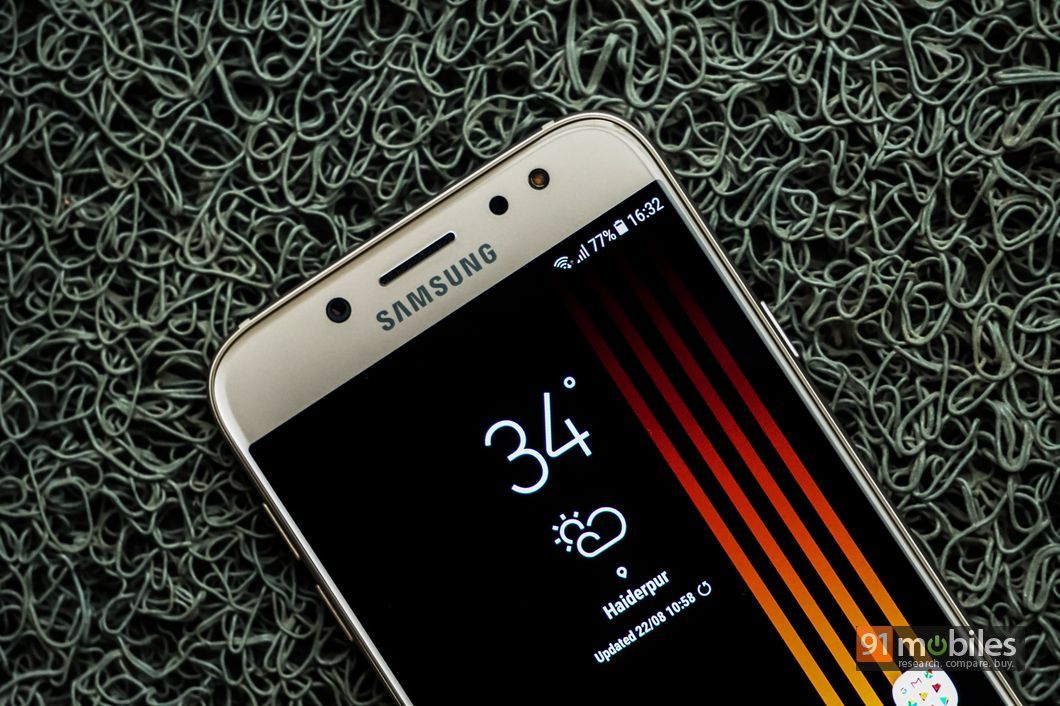 I’ve enjoyed my time with the Samsung Galaxy J7 Pro. The smartphone is one of the best-looking handsets in the affordable segment and to me, is an all-rounder considering I don’t play that many games on the mobile platform. The battery life is excellent and the camera setup never failed to impress me. The smartphone is updated with the latest Android software and comes bundled with some nifty tricks like Samsung Pay too. Having said that, if you prioritise performance over everything else, then you can get a much better value for your money elsewhere. The Moto G5 Plus (review), for instance, retails for a lot less and comes equipped with relatively faster internals. Moreover, Samsung’s track record in terms updating its affordable Android offerings to newer builds isn’t great. Seeing how Android O is already here, you might want to pick up a smartphone which will be updated to the latest software and as of now, there’s no news on whether Samsung will bring the Oreo update to the J7 Pro. All in all, the J7 Pro is a solid offering from the company and what it lacks in specs, it makes up for in the other areas.