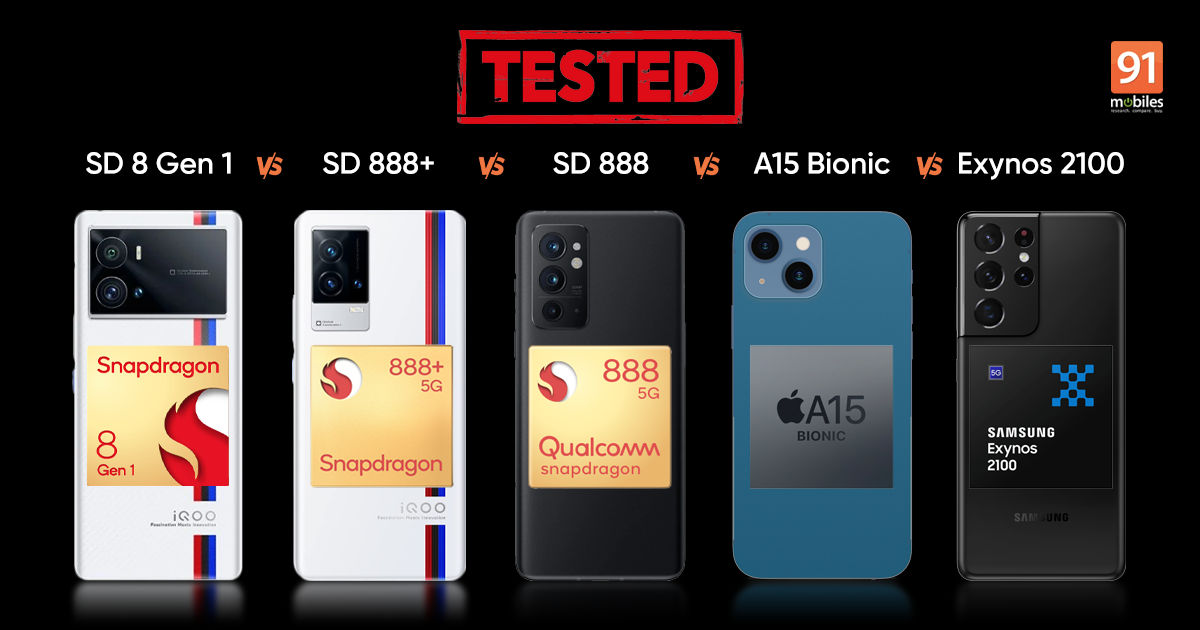 Back in the day, only a handful of phones could handle demanding tasks admirably. However, fast-forward to 2022 and you’ll find no shortage of power-packed devices that can crunch through your productivity and gaming needs without breaking a sweat. Off the top of my head, devices backed by Exynos 2100, Snapdragon 888, Snapdragon 888+, Snapdragon 8 Gen 1, and Apple’s A15 Bionic mobile platform offer unparalleled performance to users. So then, if you were eyeing a phone powered by the aforementioned, high-end chipsets, which SoC should you settle for? Well, read on to find out. 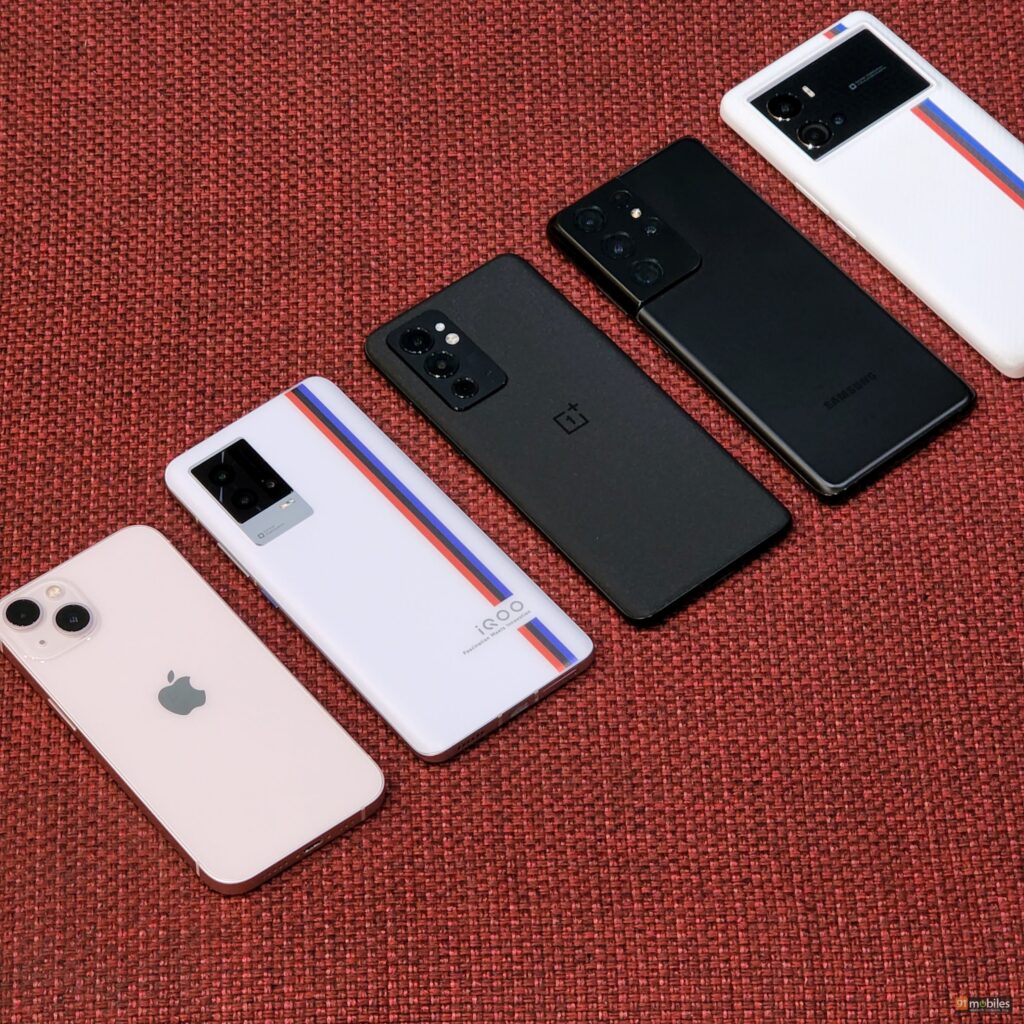 Disclaimer: For the purpose of the article, the synthetic and real-world gaming tests were conducted on the following phones.

Let’s kick things off by talking about the benchmark scores from the phones. To be clear, benchmarks aren’t the “be-all and end-all” of a device’s performance chops. That said, synthetic tests should give you an idea of each phone’s performance and how they rank amidst the competition. With that out of the way, let’s first look at our contender’s Antutu scores. Right off the bat, you’ll notice that the Exynos 2100 SoC, albeit over a year old, can still stand its own against Qualcomm’s Snapdragon 888 and 888+ mobile platforms. Furthermore, both, the OnePlus 9RT as well as the iQOO 9 output similar scores, with the latter yielding around 60K more points only.

On the flip side, the performance gap widens by almost 1.3 lakh points when we compare the scores from the iQOO 9 and the Snapdragon 8 Gen 1 backed iQOO 9 Pro. Clearly, Qualcomm has made strides with its latest, 4nm SoC which, by the way, surpasses Apple’s A15 Bionic in the benchmark too. Now, for the uninitiated, Antutu tally comprises a smartphone’s overall performance and the benchmark factors in an SoC’s GPU prowess, etc as well when computing the score. Correspondingly, if you turn the page over to GeekBench (which is a CPU-intensive benchmark) then you’ll find drastically different results. To wit, Apple’s A15 Bionic puts the competition in its rear-view mirror and the iPhone 13 yielded the highest single-core and multi-core numbers totalling 1,708 and 4,484 points respectively. The iQOO 9 Pro came in second, with a single-core and multi-core score of 1,223 and 3,443 points respectively.

Interestingly, despite outputting the lowest Antutu score, the Exynos 2100 backed Samsung Galaxy S21 Ultra managed to secure a higher multi-core score than the iQOO 9, which features Qualcomm’s Snapdragon 888+ SoC. In fact, the handset’s GeekBench numbers were lower than the OnePlus 9RT too, which employs the Snapdragon 888 processor. Be that as it may, it’s evident that the Exynos 2100 SoC is still plenty capable for CPU-bound workloads like editing videos, multitasking between a slurry of apps, etc.

What good is a high-end SoC if it cannot sustain its performance over a period of time, amirite? Well, to test the chipsets against throttling, I subjected our contenders to 3D Mark’s Wildlife Extreme test which runs for an interval of 20 minutes. I have jotted down my findings below, so take a gander –

With the benchmarks out of the way, let’s take a look at the SoC’s gaming capabilities. Starting with BGMI, all but one of the SoCs could run the game at the best possible graphics and FPS settings. To wit, the Exynos 2100 chipset, while good, isn’t geared towards gamers and consequently, runs the game at HDR graphics and Ultra FPS presets. Correspondingly, buyers looking to get 60fps out of the title will have to drop the graphics to the ‘Smooth” preset. On the other hand, the Snapdragon 888, 888+, 8 Gen 1 and Apple’s A15 Bionic chipsets could run the game effortlessly at HDR graphics and Extreme frame rate settings. Furthermore, all four chipsets could even run the game with the 4K UHD texture pack enabled, which is great.

Don’t get me wrong – the Exynos 2100 SoC is plenty powerful and the chipset can run most games at comparable graphics and FPS settings. Take CoD Mobile, for instance, which runs at the highest FPS preset on the phone and that’s with all the visual tweaks enabled. Be that as it may, Qualcomm and Apple’s offerings continue to be the golden standard for mobile gamers.

Clearly, Apple’s A15 Bionic and Qualcomm’s Snapdragon 8 Gen 1 SoCs offer the best performance to end-users. What’s more, the chipsets don’t falter when subjected to strenuous loads either. That being said, the Snapdragon 888 mobile platform is no slouch in the performance department either, and the chipset can run most, if not all games at comparable graphics and FPS settings. 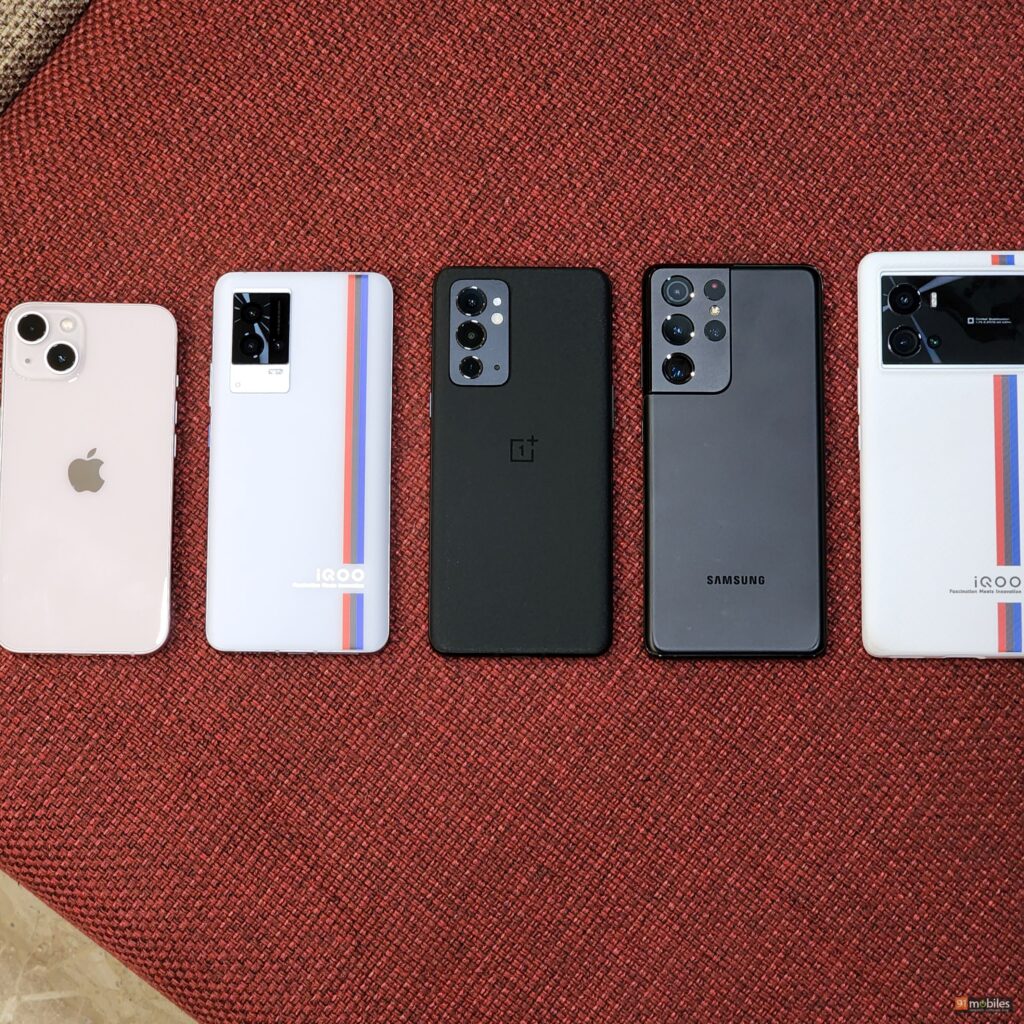 More importantly, the Snapdragon 888 is the most VFM of the lot, and the SoC powers devices retailing under Rs 40K. So, if you don’t have deep pockets and are looking for an affordable option that can go toe to toe with the best phones in the market, you will find plenty to like about Snapdragon 888 backed devices. Furthermore, if you don’t tend to play a lot of games on your phone, then you’ll find the Exynos 2100 chipset equally adept at handling day-to-day tasks as the Snapdragon 888 / 888+ SoCs too. Do let us know in the comments below which SoC you’d want to see powering your next phone and as always, stay tuned to our blog for more tech coverage.