Purchasing a party speaker might seem like a lousy investment, given the current state of affairs. But, that hasn’t deterred Sony from unveiling its brand-new range of portable party speakers in India – I suppose you don’t need to throw a soiree to enjoy good sound, after all. The latest lineup comprises three beefy X-series systems, including the SRS-XP700, the SRS-XP500 and the SRS-XG500, which I will be reviewing today. So, without any further ado, let’s jump right in.

Sony hopes the SRS-XG500 will be the life of a party and has styled the unit to reflect the same. For one, the speaker looks the part of an old-school boombox, the sort you might’ve seen folks lug around their shoulders in music videos. Furthermore, the device even comes with a carrying handle, allowing you to transport the speaker from one room to the other without much hassle. I say ‘much’, as the unit weighs in at 5.6 kilos and therefore, might be a tad too heavy to move around constantly. 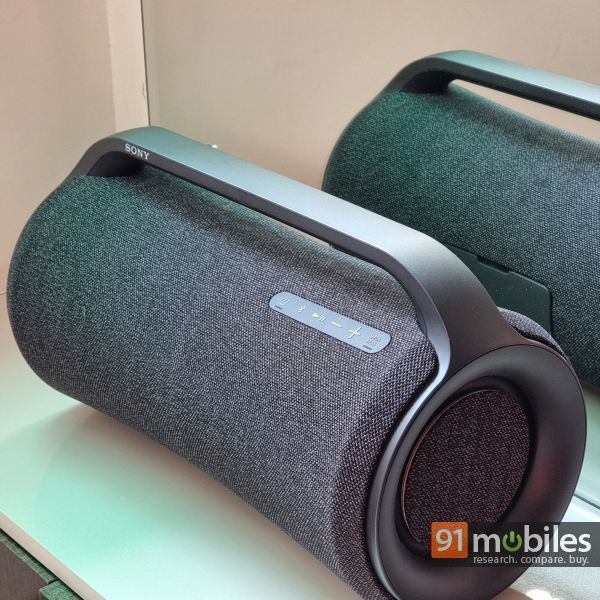 What’s more, save for the music playback controls on the top, the XG500’s cylindrical chassis features a woven-mesh fabric finish that feels luxurious, to say the least. It also helps that dust doesn’t stick to the mesh material, thereby allowing you to keep the speaker in pristine condition at all times. Of course, it wouldn’t be a Sony party speaker without any RGB. To that note, the unit features two RGB LED rings positioned on either end of the speaker. Unfortunately, the RGB LEDs don’t get too bright, so you’ll have to dim the lights in your room for best results. 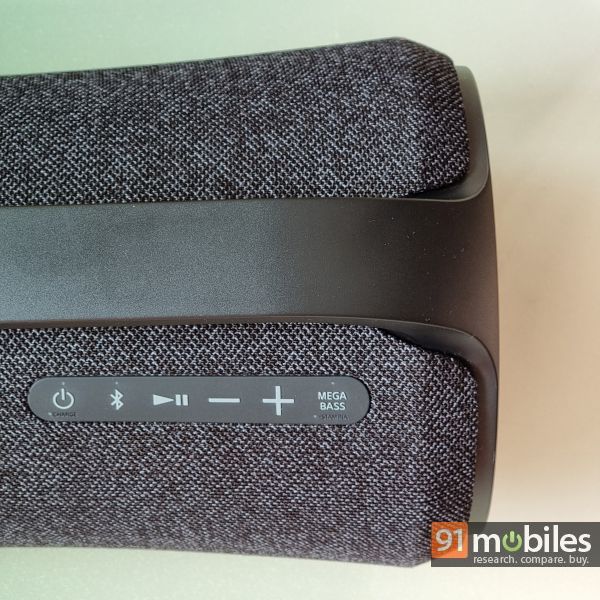 Moving on, the Sony SRS-XG500 is quite rugged too. In fact, the speaker is IP66 certified, so you can use it by a poolside and even spray it with water to rinse it clean. Rest assured, the unit is built like a tank and will keep your mind at ease if you’re entertaining clumsy guests. As for the I/O, the Sony SRS-XG500 ships with a slurry of ports towards the back that have been carefully tucked underneath a rubberised gasket. As such, the device features two Type-A ports that can charge your paired devices as well as a jack to connect a guitar to the speaker and use it as an amp. You can even use the ¼” connector for karaoke sessions by plugging in a mic. Lastly, the device features a barrel-style connector for charging along with a host of buttons that can help you turn the RGB LEDs off and on, switch between a guitar and a mic configuration, etc. 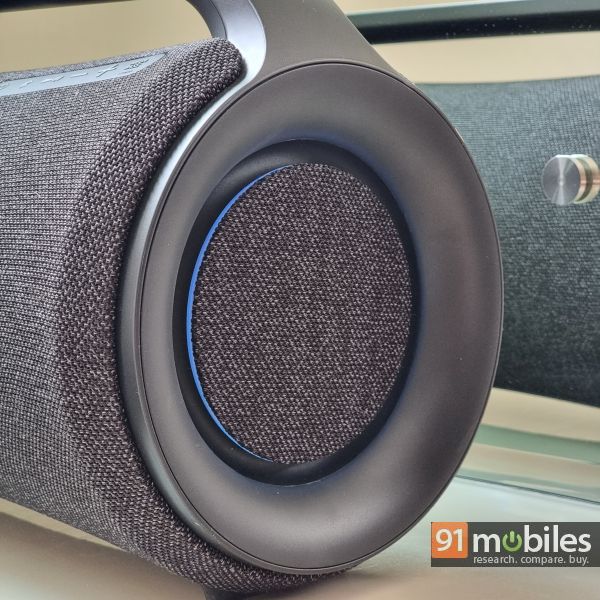 Now, don’t let the SRS-XG500’s cylindrical chassis fool you – the speaker doesn’t output 360-degree sound. Instead, the driver units have been positioned on either end of the unit and correspondingly, you can’t orient the speaker vertically when jamming to tunes. Thankfully, the company has furnished the unit with tiny rubberised footrests that ensure the speaker stays put even when you have the volume turned all the way up.

Before I address the speaker’s sound quality, let’s talk specs. The Sony SRS-XG500 ships with four speaker units, comprising two 11cm woofers and two 2.5cm tweeters. Interestingly, the unit’s woofers tout non-circular diaphragms with a greater surface area that should, in theory, increase the sound pressure and output punchier bass. In terms of codecs, the device supports SBC, AAC as well as the company’s proprietary hi-fidelity LDAC Bluetooth codec. Do note that I tested the speaker across a myriad of lossless tracks on Apple Music, with the Samsung Galaxy S21 Ultra as the source. Unsurprisingly, the unit could resolve songs much better over the LDAC codec and would advise prospective buyers to make the most of the same. Going into the review, I expected the Sony SRS-XG500 to pack a punch in the low-end and sure enough, the speaker’s bass output is among the best in the biz. Honestly, it’s hard to enunciate the speaker’s low-end prowess in words. While this review should get the point across, I implore buyers to visit their nearest store and audition the unit – the XG500’s low-end output will honestly blow you away. To that note, the speaker offers a thunderous punch in the low-end which, at high volume levels, will rattle the walls in your room. Take James Blake’s Limit To Your Love, for instance and here, the beat drop at around the 50-second mark sounds incredibly powerful and dare I say, gratifying – the beats sound extremely punchy and aggressive and with the MegaBass preset enabled, you’ll feel the sub-bass reverberate in your chest. 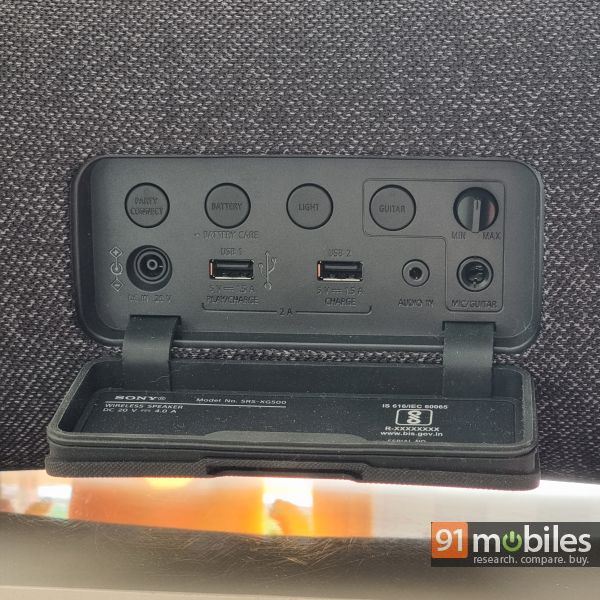 The best part is that you don’t need to play ‘exciting, uptempo’ songs to make the most of the unit’s low-end prowess. In fact, the speaker resolves tracks like You Want It Darker by Leonard Cohen to a tee too. To that note, the XG500 reciprocates the artist’s deep, melodious undertone rather well. Moreover, the kickdrums playing in the background are relayed appropriately as well, in the sense that the slam is stimulating enough to keep you engaged to the song’s tune, albeit doesn’t take the limelight away from the vocals. Turn the page over to something more upbeat, say Ashes by Stellar and you’ll find a similarly pleasing result – the thumps have minimal decay, good extension and they don’t cast a shadow on the vocals either. Unfortunately, the unit’s treble output leaves something to be desired. In Tai Verdes’ Drugs, the strums from the guitar sound rather dull and lack sparkle. The song is still enjoyable to listen to, thanks in no small part to the XG500’s spacious sound stage and adequate imaging. Consequently, even at high volume levels, you’ll be able to make out the different instruments playing in the background distinctively. That said, the XG500 is first and foremost, a party speaker and consequently, doesn’t give much prominence to the highs. On the flip side, the speaker can get audaciously loud – so much so, you might get complaints from your neighbours if you play music for extended sessions at max volume. I know I did. 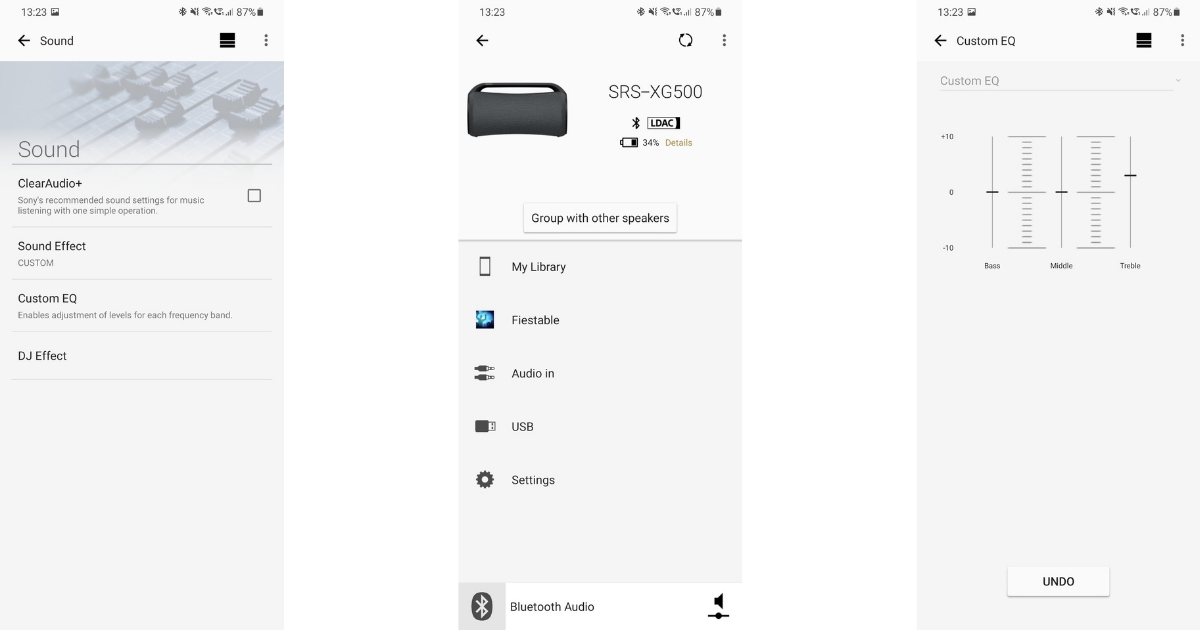 I should add that you can tweak the speaker’s sound output via Sony’s Music Centre app. I did try my hand at the same, but didn’t notice any major upheaval in the speaker’s sound signature. The app also gives insights into the speaker’s battery life and allows users to tweak the lighting effects too. As for the battery backup, the Sony SRS-XG500 can last buyers up to 30 hours off a single charge. Consequently, you should be able to go without charging the unit for days. As such, I used the speaker for around 12 days and in that time, I only had to charge the speaker once, which is great.

The Sony SRS-XG500 can be picked up for Rs 32,990 from Amazon and the company’s website. For the price, the unit is undoubtedly an expensive proposition. That said, the speaker justifies its price by offering a stylish and rugged design, along with a roaring audio output. It goes without saying that the speaker has some inherent limitations – the sound signature is more ‘fun’ than ‘clinical’, for instance. Moreover, the unit is quite bulky too.  However, if you were on the lookout for a speaker to paint the town red, then the XG500 will not disappoint you.