I vividly remember buying my first TV a few years ago – a 32-inch Samsung LCD with an HD-ready panel offering 1,366 x 768 pixels. Believe it or not, I actually paid a good chunk of change for the device. It goes without saying that TVs have come a long way since then, not just with regards to the tech that powers them, but more so in terms of their price. In fact, nowadays, you can easily get your hands on a 4K smart TV from brands like Xiaomi, Vu, Realme, and more without spending an arm and a leg. Can then, Toshiba’s latest 4K TV, the 55U50, stand out in a market brimming with options? Let’s find out.

The Toshiba 55U50 has been predominantly constructed using plastic but don’t let that fool you into thinking that the unit weighs less. In fact, compared to my 50-inch Xiaomi 4K Smart TV, the difference is night and day, and taking Toshiba’s offering out of its box is a workout in its own right. 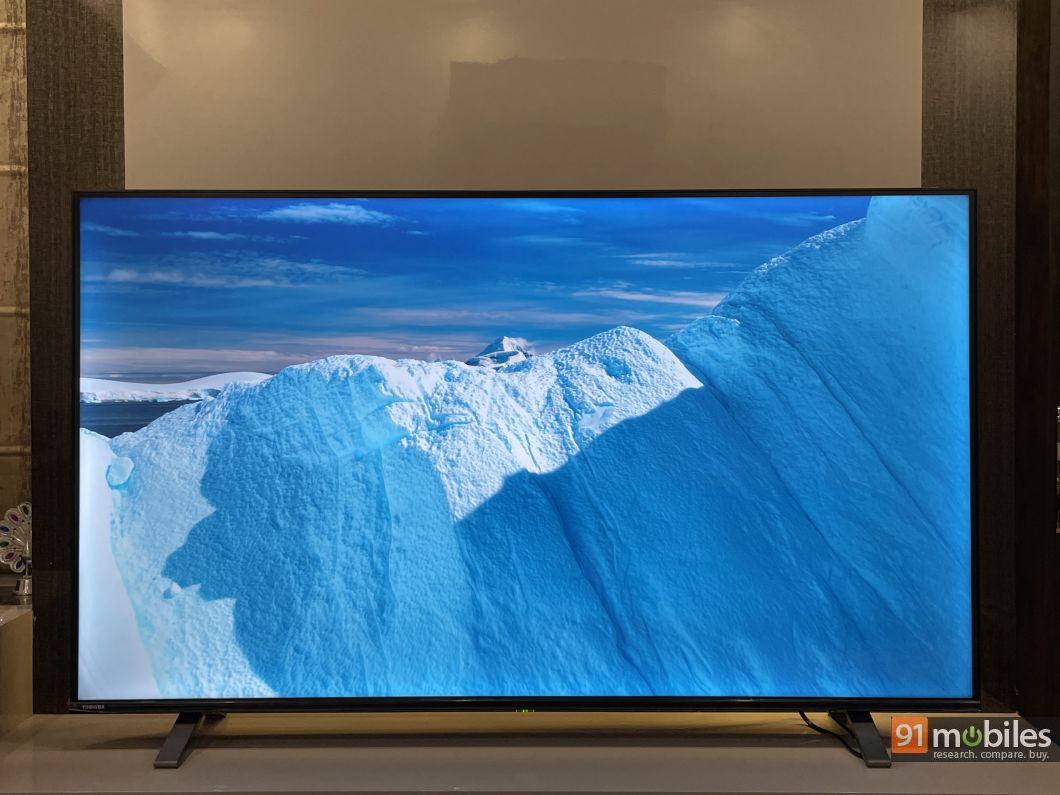 That said, unlike the competition, the back of the Toshiba 55U50 is quite rigid and the entire frame is void of any flex. This has been made possible by deploying a hard plastic outer shell for the TV which feels extremely robust. What’s more, there’s no give on the display either and all things considered, the 55U50 is easily one of the most well-built TVs I’ve tested in its price segment. 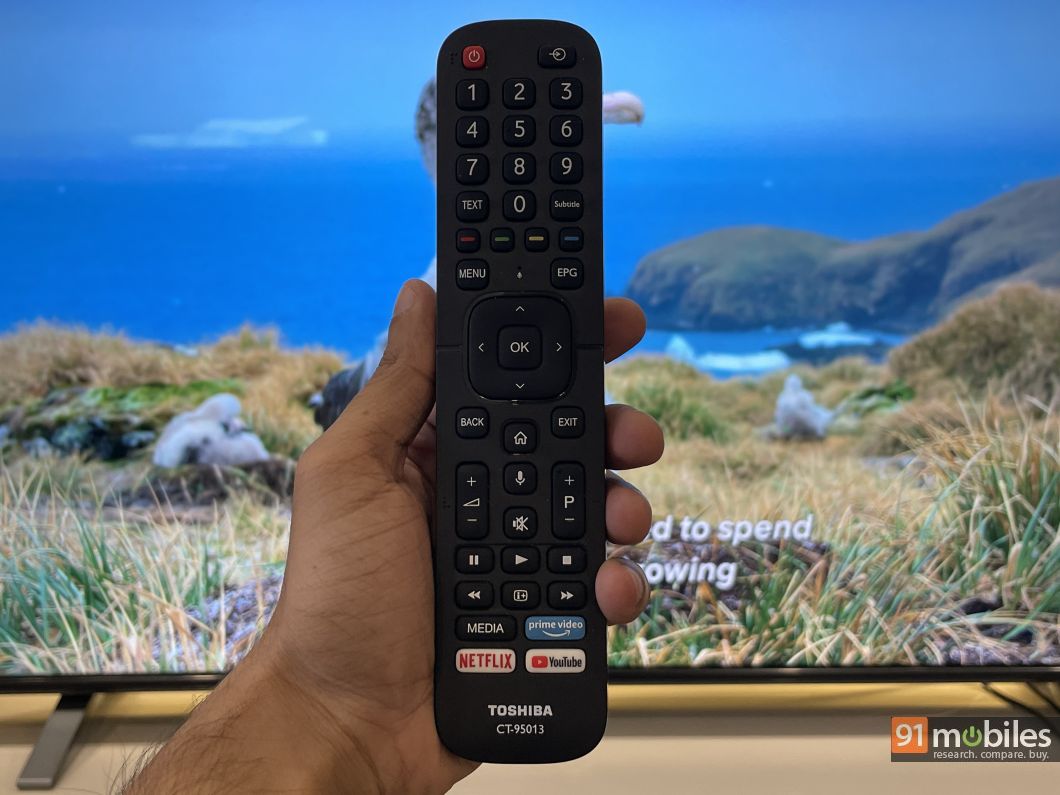 Moving on, the Toshiba 55U50 is as beautiful as it is rugged, and the TV ships with extremely slim bezels bordering the screen. This, in turn, paves way for a much more immersive movie-watching experience, and with the panel turned on, I could barely tell the bezels from the screen. I’d also like to add that the unit ships with elegant tabletop stands which have been constructed in entirety using metal. Furthermore, unlike most TVs, the slots to install the feet have been positioned slightly inwards. Ergo, you can rest the 55-inch Toshiba on a table which is relatively small in length too. That said, if you were planning to mount the TV on a wall, then you’ll be glad to know that the company bundles the required brackets with the retail packaging. 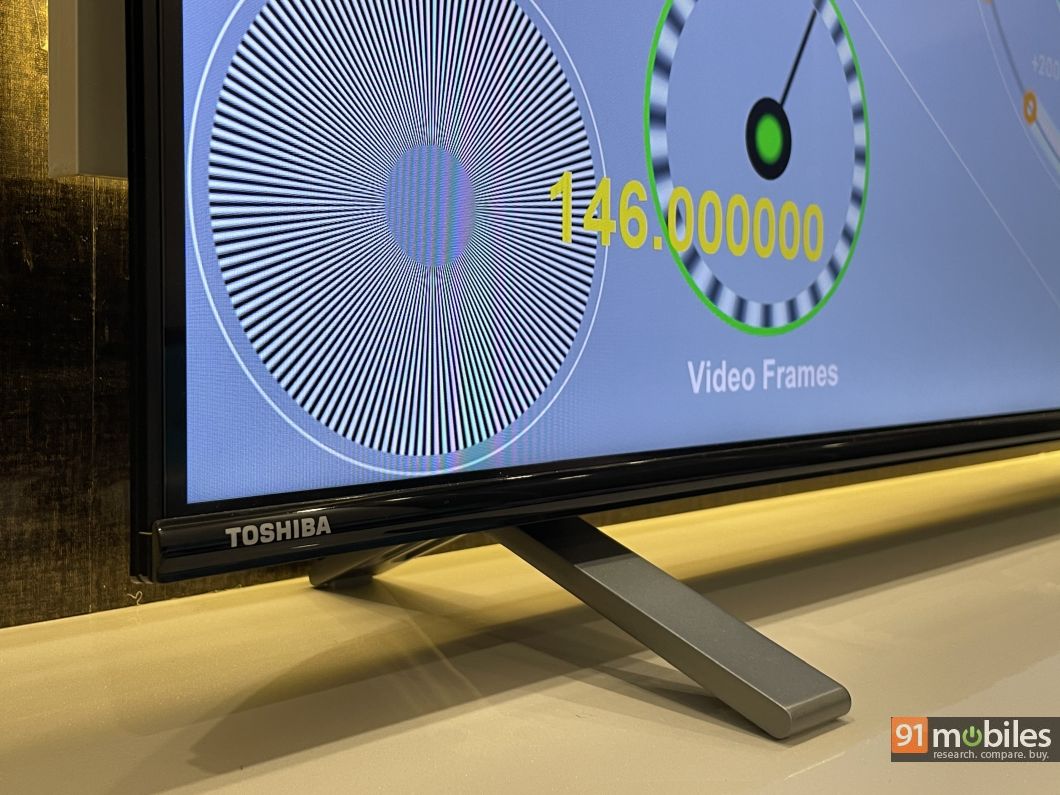 As for the remote, the Toshiba 55U50 comes with a Bluetooth remote which automatically connects to the TV upon first boot. The remote makes use of plastic for its construction and comes with hotkeys for popular streaming services like Netflix and Amazon Prime. Moreover, seeing how the TV is compliant with Amazon’s Alexa smart assistant, you can use voice commands to turn the TV on via an Echo device, or play a movie of your liking by speaking into the remote seamlessly. Bear in mind that you will have to register your e-mail ID or phone number on the company’s portal and link your Amazon account to the TV. However, the setup for the same is straightforward and I was able to get voice commands running on the TV in no time.

In terms of connectivity, the Toshiba 55U50 comes with a treasure trove of ports, including two USB Type-A 2.0 ports, three HDMI ports (one of which supports ARC), a headphone jack, a SPDIF port an ethernet connector and, an AV input slot. That said, the TV can only connect to 2.4GHz networks and correspondingly, my download speeds were severely limited on the Toshiba 55U50. On the other hand, most competing TV sets including Xiaomi’s 50-inch 4K Smart TV can connect to both, 2.4GHz as well as a 5GHz network. 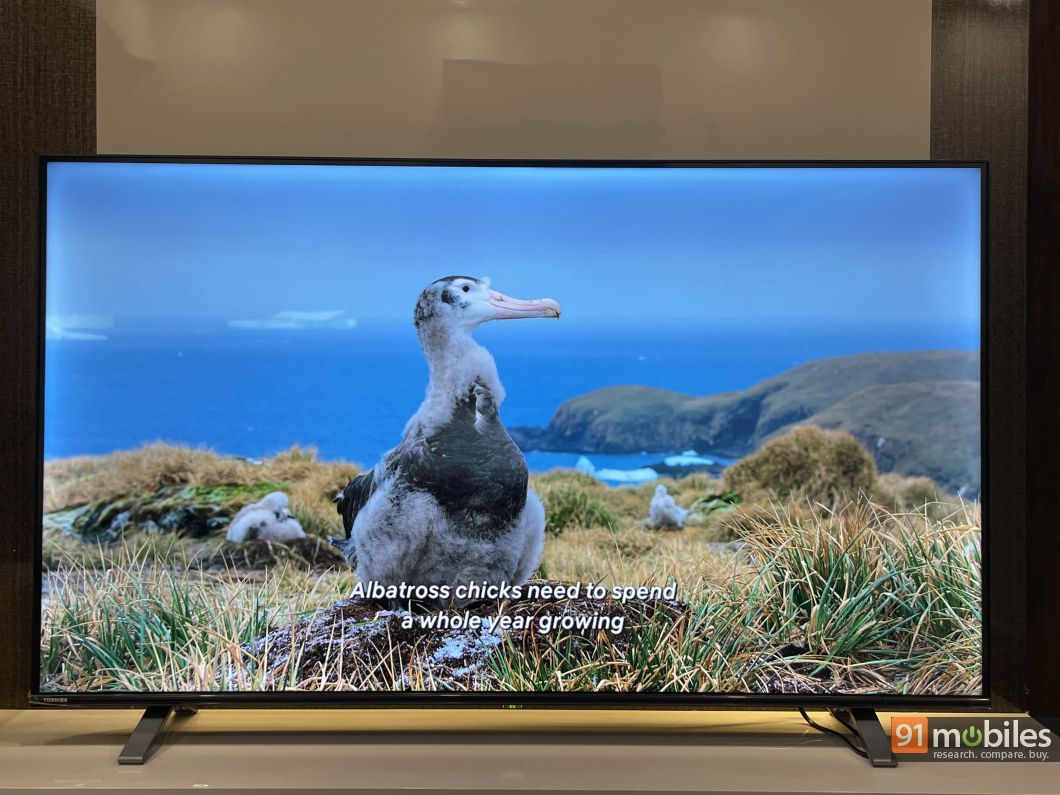 Unfortunately for Toshiba, the bad news doesn’t end there, and the company’s Vidaa OS leaves much to be desired. In fact, of all the popular OTT streaming services, the utility only supports Netflix, Amazon Prime, and YouTube. Therefore, you will not be able to stream a wealth of content available on platforms like Disney+Hotstar, MX Player, the works. Moreover, the TV doesn’t ship with any content tie-ups either and as a result, your media consumption experience will feel a tad restrictive on the TV.

Thankfully, Toshiba does offer a functional smart remote app dubbed Remote Now, which can be downloaded for both iOS, and Android. The app offers a tidy, user-friendly interface and should act as a good failsafe should you misplace the bundled remote or, should the batteries powering it run out of charge.

Coming to the meat of the matter, the Toshiba 55U50 is equipped with a 55-inch, 4K LED display. What’s more, unlike the herd of other 4K TVs in the market, the 55U50 supports Dolby Vision, which is a proprietary HDR format developed by Dolby. Now, compared to the HDR10 format you’d find on most affordable 4K Smart TVs, Dolby Vision implements HDR playback on a scene-by-scene basis, making the picture you see on your screen as accurate as possible. Techno mumbo-jumbo aside, watching movies or shows on the Toshiba 55U50 is a treat to the eyes. Sitting directly in front of the screen, I can confirm that the movie-watching experience offered by Toshiba’s offering is superior to what you’d get from say, a similarly-priced Xiaomi TV. Despite not offering any local dimming zones, the Toshiba 55U50 offered satisfactory black levels which can be credited to the company’s simulated Ultra Dimming tech. Correspondingly, the set captured the grim tone of the streets in series like Gotham, Dark or Marvel’s Daredevil really well. What’s more, I didn’t notice any instances of vignetting when viewing content that had been purportedly shot in the dark either.

Turn the page over to something more vivid, and you will be left awestruck admiring the bright, vivid shades offered by the 55U50’s screen. The colour temperature is slightly on the warmer side but it’s not a dealbreaker. Moreover, you can finetune the image quality by tweaking the colour saturation or, using the built-in colour tuner to change the white balance and adjust the gamma level too. 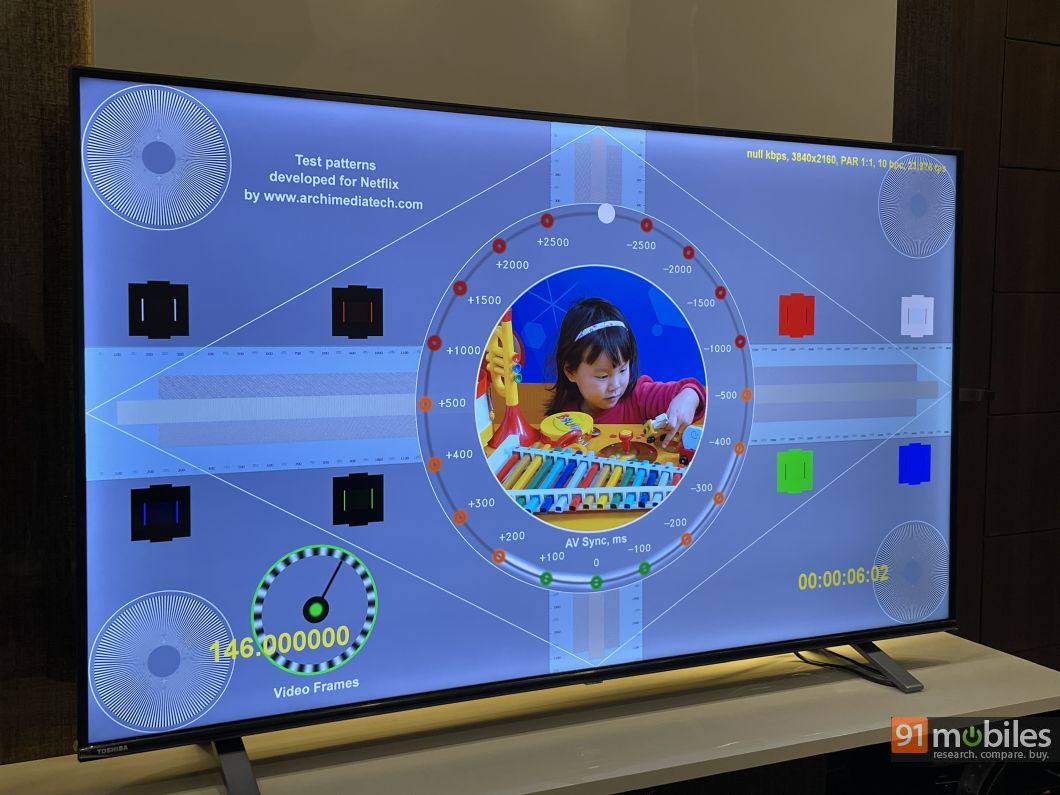 That said, I couldn’t get a number on the TV’s peak brightness level. I did reach out to the company, and was told that the brightness is around 350 nits or higher. Regardless, I didn’t face any issues watching my favourite shows on the TV, even with a lot of natural light seeping into my room. The viewing angles were fine for the most part too, however, I did notice more backlit bleed creep into the frame when viewing the screen at an angle.

In terms of audio, the Toshiba 55U50 offers a 30W output, which is on par with the competition. The speakers get adequately loud and offer good depth too, meaning you won’t have to invest in a soundbar straight away.

So, for its asking price of Rs 38,990, should you pick up the Toshiba 55U50? Well, despite offering outstanding picture quality and a robust, elegant design, I’d say pick up the set only if you’re not vested in streaming services other than Netflix or Amazon Prime. As things stand, the lack of other OTT services plagues the otherwise fantastic experience of using the 55U50. Correspondingly, until the company offers a fix for the same, I’d suggest you look elsewhere. 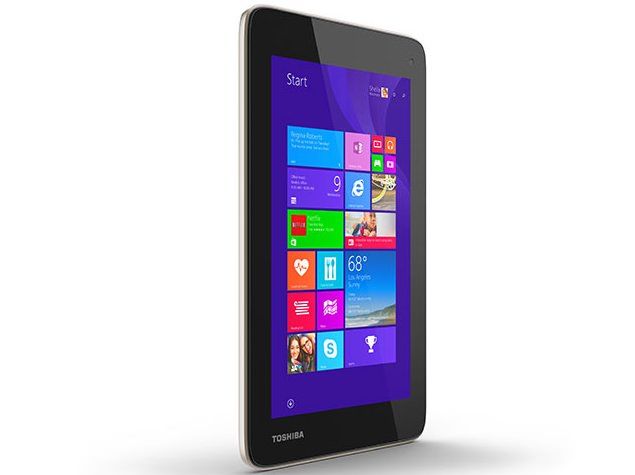 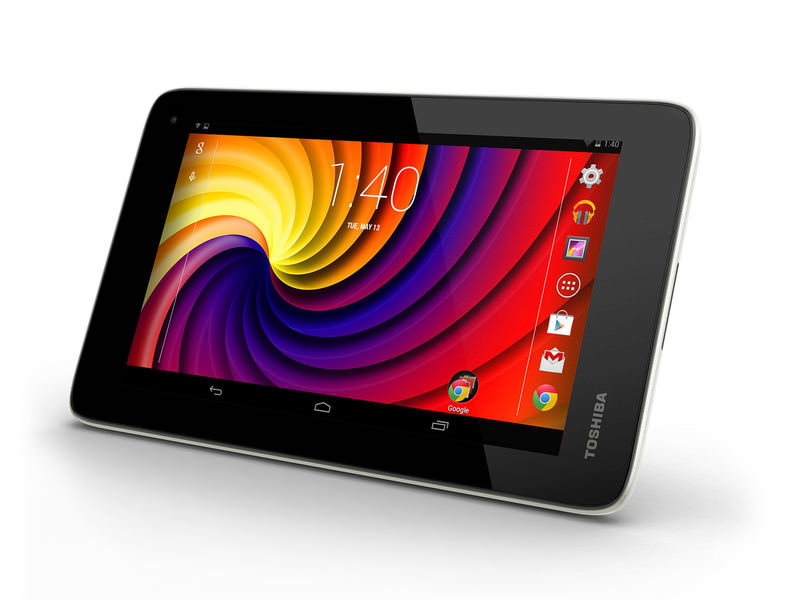 Toshiba with Sony to demonstrate TransferJet technology at MWC 2012

Uber drivers won’t ask you for your destination anymore and cancel, here’s why