Alexa doesn’t need any introduction, and for many households who use devices powered by Amazon’s smart assistant, is almost like a member of the family. Amazon has been quite active, adding new devices to its portfolio frequently, which means that the Echo smart speaker range now has something to suit everyone, regardless of budget or specific requirements. From serving up music on demand to controlling compatible smart home gadgets, and from responding to queries to delivering news and weather updates, there’s little that Alexa can’t do. And she (it does feel quite natural for me to refer to the smart assistant as she), keeps evolving too, adding new capabilities over time. The all-new Echo Show 10 comes in as the most premium and most feature-packed offering from Amazon yet, and some of its capabilities are quite exciting. Let’s get up close and check out how it performs. 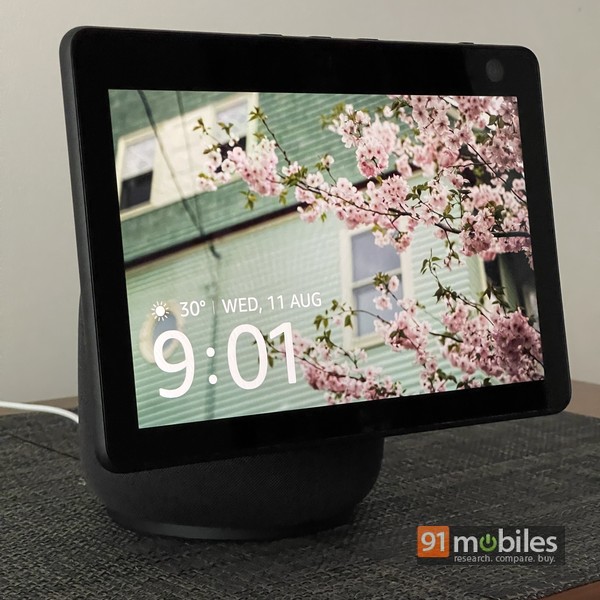 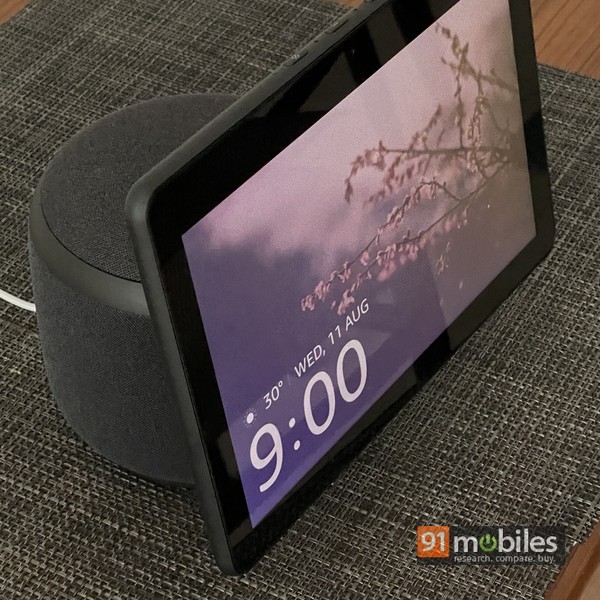 Both in terms of form and function, the new Echo Show 10 looks like a fusion of the Echo Studio and the previous-generation Echo Show 10. With a 10.1-inch screen slapped onto a cylindrical base that contains the speaker system, the overall design looks slightly strange, truth be told. That said, this ingenious design enables the screen to rotate and track you as you move around the room. I’ll get into more details later, but you should know that the placement of the new Echo Show 10 has to be given some thought since it can’t be just placed into a corner. You’d need to make sure there’s enough space around it for the screen to move. The motorised base with the screen can rotate almost a complete circle, but the range of motion can be adjusted if required too… to make sure the display doesn’t bump into a wall or something else kept in close proximity. The screen looks like a large tablet with noticeably wide bezels, along with a big lens that hides the 13MP camera on the top left, mounted on an arm on the side of the speaker base. On top, you can see the mics, along with buttons to control volume, a key that mutes the mics, and a slider that toggles the physical camera shutter. The speaker is clad in fabric, and right at the bottom, has a port for connecting the bundled adapter’s barrel connecter. 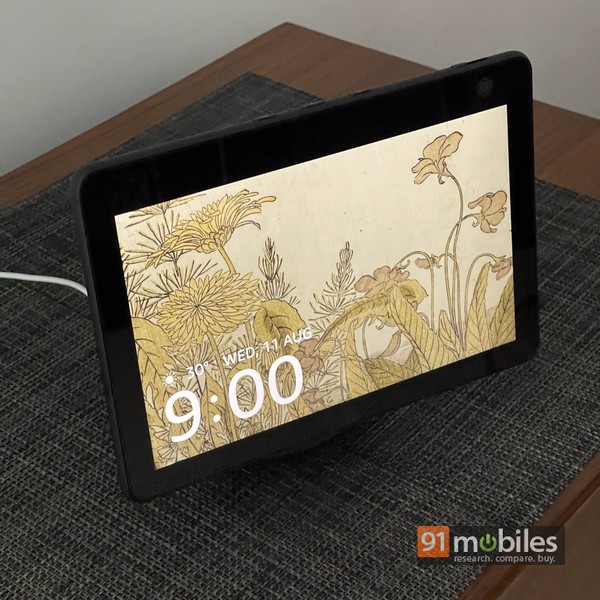 The 10.1-inch display comes with a resolution of 1,280 x 800 pixels, and as mentioned earlier, can rotate on its motorised base that has the speaker system. While a higher resolution would be good to have, the screen serves its purpose in terms of sharpness and clarity. It is however, quire reflective, which can be a problem if you keep it in a well-lit place, or have too many lights on. The screen is fixed in landscape orientation, though you can adjust the tilt manually if required. 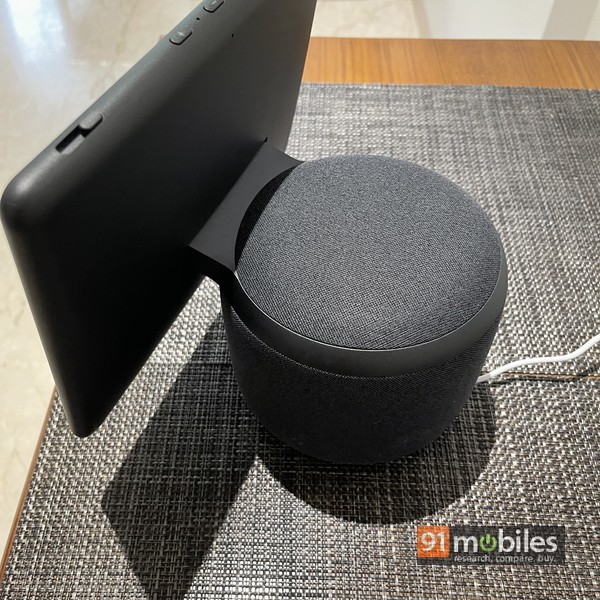 Thanks to the built-in 3-inch woofer and a pair of 1-inch tweeters, the Echo Show 10 can churn out room-filling sound. The bass can get a bit muddy when the volumes are turned up, and in some cases, the placement of the screen in front seems to affect the sound as well. It might not match the Echo Studio or please audiophiles as far as pure audio quality is concerned, but the Echo Show sounds fine for casual listening… fulfilling its use cases as a hybrid device that can serve up both music as well as basic visual entertainment etc. 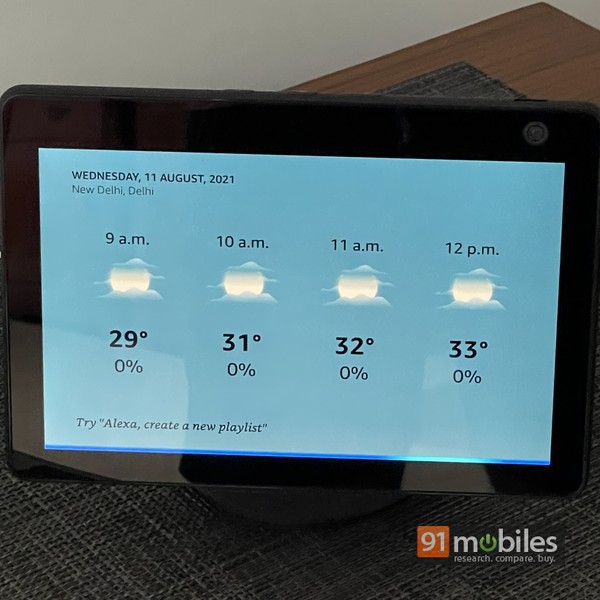 As the saying goes “behind every successful man is a woman”, Alexa is the one responsible for driving the Echo Show 10’s smarts. As usual, you can ask Alexa to play music, set reminders or alarms, give you weather updates, prepare shopping lists, perform web searches etc. Thanks to the screen, the Echo Show 10 actually gives you a visual version of Alexa, so asking for weather will give you icons, playing music can show you album art and song lyrics, and you generally get visual cues for almost everything you do with it. You can even use the screen to view videos via services like Prime Video, Netflix and YouTube. The screen background can be customised of course, and you can even use it as a digital photo frame. 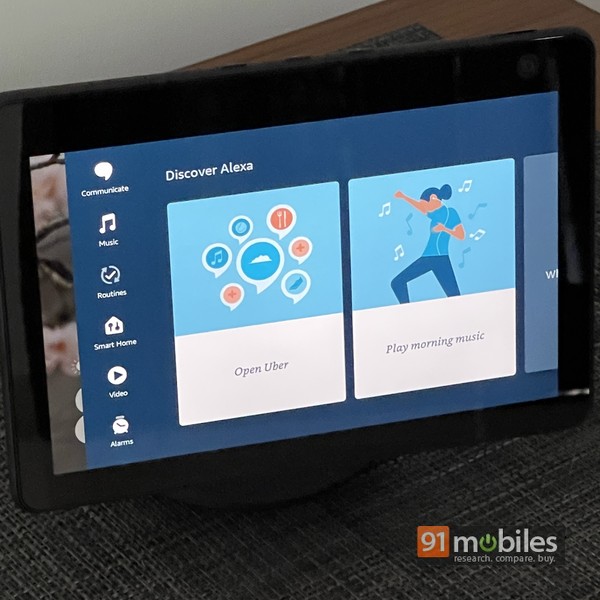 A Zigbee hub is built-in, allowing you to control compatible smart home devices without needing additional hubs. Of course, the Echo Show 10 lets you control Wi-Fi-based, Alexa-compatible smart home devices using your voice as well. There are a whole bunch of these available, including devices like smart bulbs, smart plugs, universal IR remotes, robot vacuum cleaners, security cameras, and others. I might be digressing here, but once you have an Echo smart speaker or smart display, it’s quite simple and affordable to set up a basic smart home system you can control by voice. 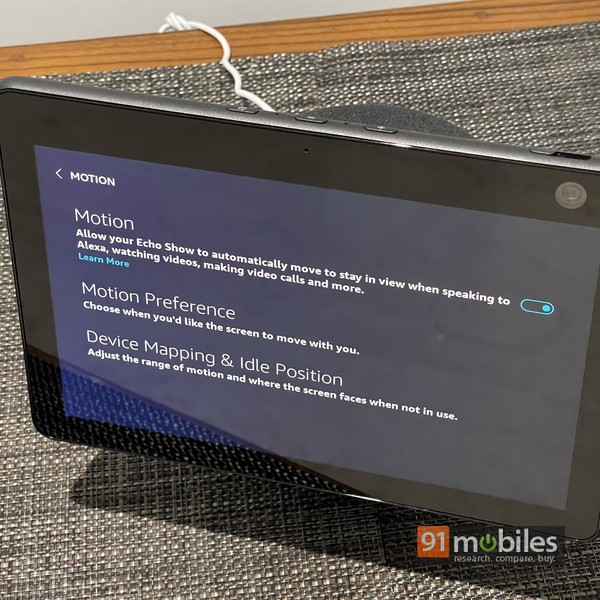 The new Echo Show 10’s motion features are really the main highlight of the device. In essence, its 13MP camera can track you, and the screen swivels to face you when you utter the wake word. In fact, the screen will keep moving as you move around the room. It’s extremely cool, futuristic and creepy, all at the same time. The feature also works for video calls, the video chat functionality that enables you to get face time with friends or family who have Echo devices with screens, or are logged into the Alexa app on their smartphones. The brushless motor doesn’t make any sound at all, so your calls remain unaffected. Of course, the novelty does wear off after a few days, but the feature can be quite handy if you want to use the Echo Show 10 extensively for video calls. The caveat is that you need good ambient lighting, without which the motion features won’t work. The motion features are also disabled when the privacy shutter is closed. 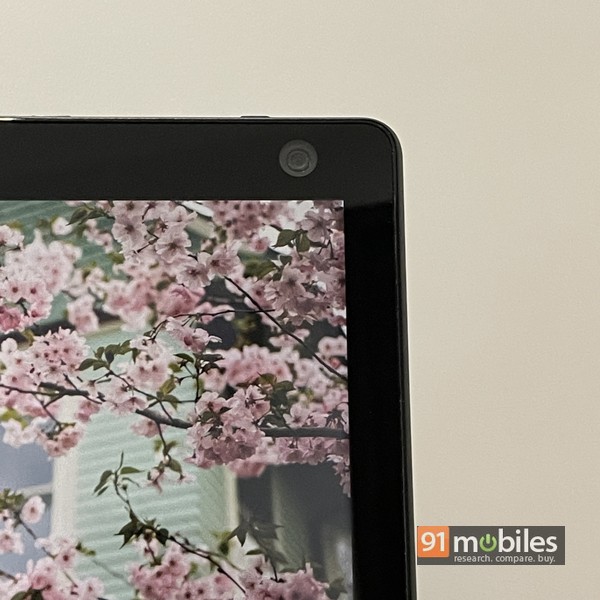 Another very handy feature in the Echo Show 10’s repertoire is home monitoring. This needs to be enabled in the device settings (on the Echo Show 10 device, not the Alexa app), and after that’s done, the Echo Show 10 appears as a connected camera in the devices tab of the Alexa app. Using this, you can monitor the room the device is placed in from anywhere in the world, though privacy can be a matter of concern. The privacy shutter can help, and in settings, you also get the option to delay the video feed and set an audio alert before the device starts streaming video from the camera. Of course, the home monitoring feature can be extremely useful for monitoring kids or elderly people at home, and other similar scenarios. 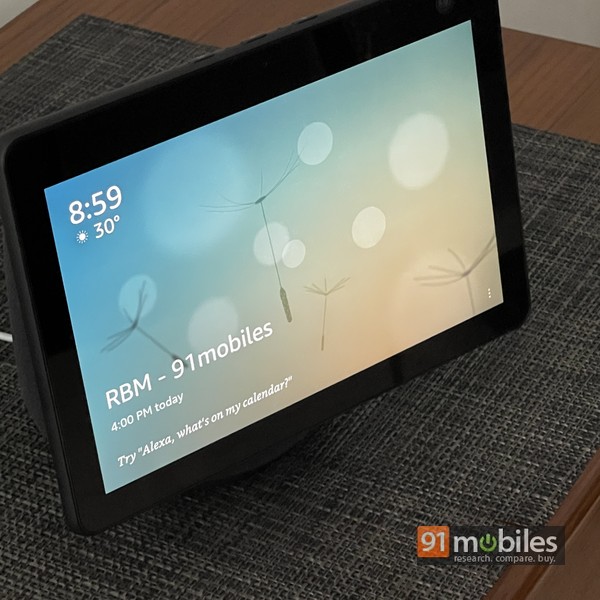 The Echo Show 10 (3rd-gen) will set you back by Rs 24,999, making it the priciest Echo device from Amazon in India. Even the Echo Studio is cheaper, and that should be your first choice if music quality is of prime (pun unintended) importance to you. Not that the Echo Show 10 is bad in terms of audio, it’s just that the Studio is better. However, the Studio doesn’t have a screen. You’d need to figure out if the Echo Studio 10 is for you, and that’s not an easy task, especially considering Amazon has a wide range of Echo smart speakers and smart displays available, spread across different price points. The beauty of the Echo Show Studio 10 is that it’s sort of an all-rounder, and the motion features it offers can’t be matched by anything else as of now. Apart from being a capable smart display cum speaker, it’s great for video calls, and handy for home monitoring too. Most importantly, it’s a fun device to have around.