Four years ago, the original Fire TV Stick (review) landed in India, and I’d like to believe it played a significant role in helping people transition from broadcast TV to streaming content. People were just waking up to the idea of smart TVs at that time, and OTT services like Prime Video, Netflix, et al, had started making their presence felt. In such a scenario, the Fire TV Stick emerged as a true saviour, converting dumb TVs to smart ones, and letting people get their dose of streaming entertainment on the big screen. Not only were smart TVs quite pricey then, there were limited options on offer, and the ones that were available couldn’t run all the streaming apps. There weren’t too many options, at least from known brands, for streaming devices too. Fast forward to 2021, and smart TVs are ubiquitous and much more accessible in terms of pricing, and there are multiple options if you want to pick up a streaming device. The Fire TV Stick, however, is still going strong. Amazon currently sells no less than three different models, with prices ranging from Rs 2,999 to Rs 5,999. The new Fire TV Cube (2nd-gen) has now landed as the most powerful, most capable streaming device from Amazon, adding another option to the mix. In essence, this device marries the functionality of the Fire TV Stick with an Echo smart speaker, and even a universal remote that can control your home entertainment setup. 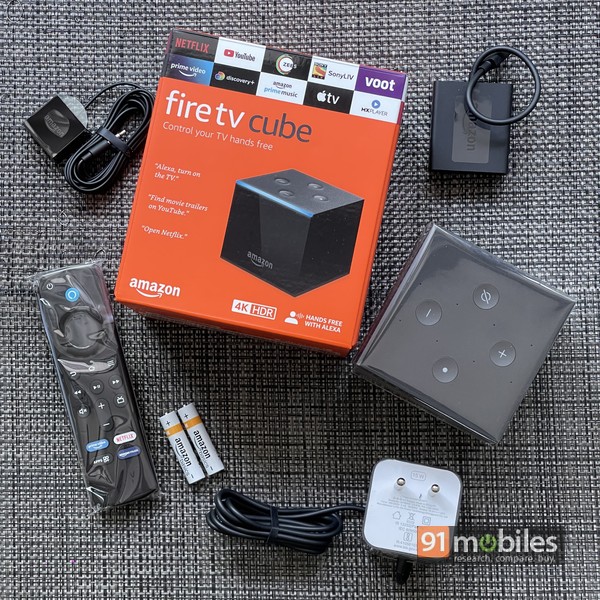 Right at the outset, it seems strange that Amazon doesn’t bundle an HDMI cable along with the Fire TV Cube. One glance at the product listing on Amazon.in, however, shows that the company has handled this issue very nicely, allowing you to add an HDMI cable to your purchase at zero cost while purchasing the device. The same glance will tell you that the Fire TV Cube is priced at Rs 12,999, making it a relatively pricier proposition as compared to its stick siblings. The device itself comes in the shape of… you guessed it… a cube, and unlike its stick cousins, is designed to sit in front of your TV rather than behind it. The small black cube is unobtrusive though and can blend into any decor. Amazon does include the latest Alexa remote (along with a pair of AAA batteries), an IR extender, and an Ethernet adapter in the box. The latter is actually a great addition in my opinion, since any device meant for serious streaming should definitely be able to hook up to a wired network. I might be digressing here, but you’d be doing yourself a favour by connecting your smart TV / streaming device to your router using an Ethernet cable if you can. Thank me later. 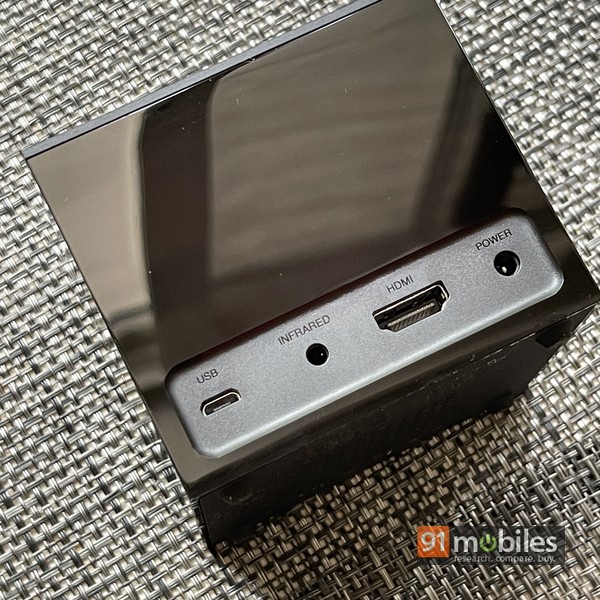 Coming back to the Cube, the small box has four buttons on top – two to control volume, one for waking up Alexa (quite redundant if you ask me), and another for muting the mics. Speaking of, the Fire TV Cube also has eight far-field mics that wait for you to utter the wake word. An LED strip on the device lights up when you do that, indicating Alexa is available (or not). On the back of the Cube, you’ll find an HDMI port, a port for the power adapter’s barrel connector, a 3.5mm socket for connecting the IR extender, and a micro-USB port for the included Ethernet adapter. Hook up the Cube to your TV using an HDMI cable and power up both devices, and the interface will guide you through the setup. 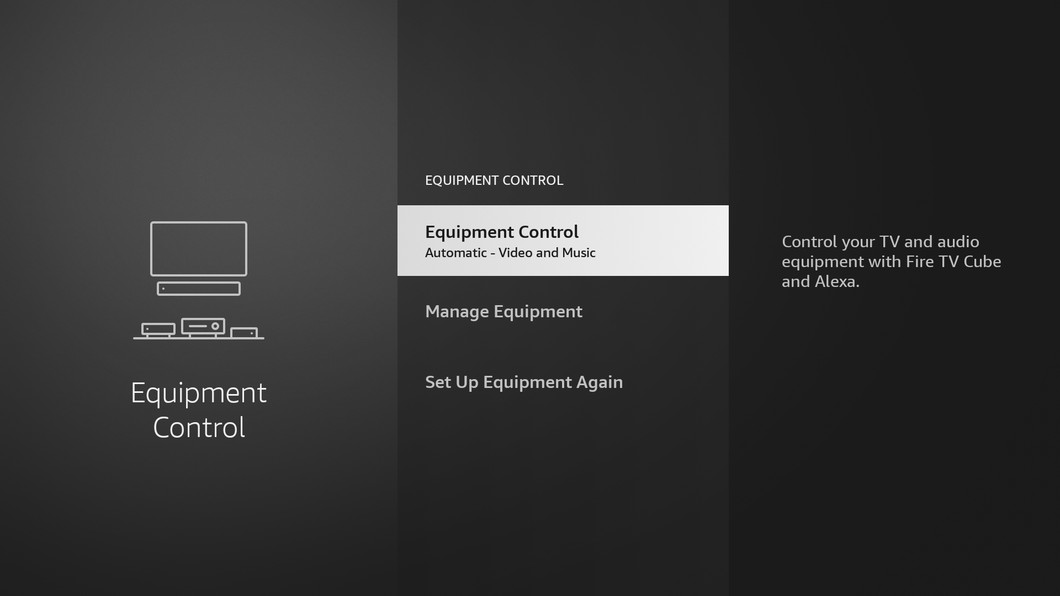 The setup process is actually very similar to that of a Fire TV Stick, and involves connecting the Cube to your Wi-Fi network and logging in with your Amazon credentials. However, there are a few additional steps, such as choosing the make of your TV, and adding other equipment such as a DTH set-top box, soundbar etc, depending upon what all you already have in your home entertainment system. The IR extender cable can be used in case you have some equipment placed inside a cabinet. You see, once set up, the Fire TV Cube allows you to control all these devices using just your voice. 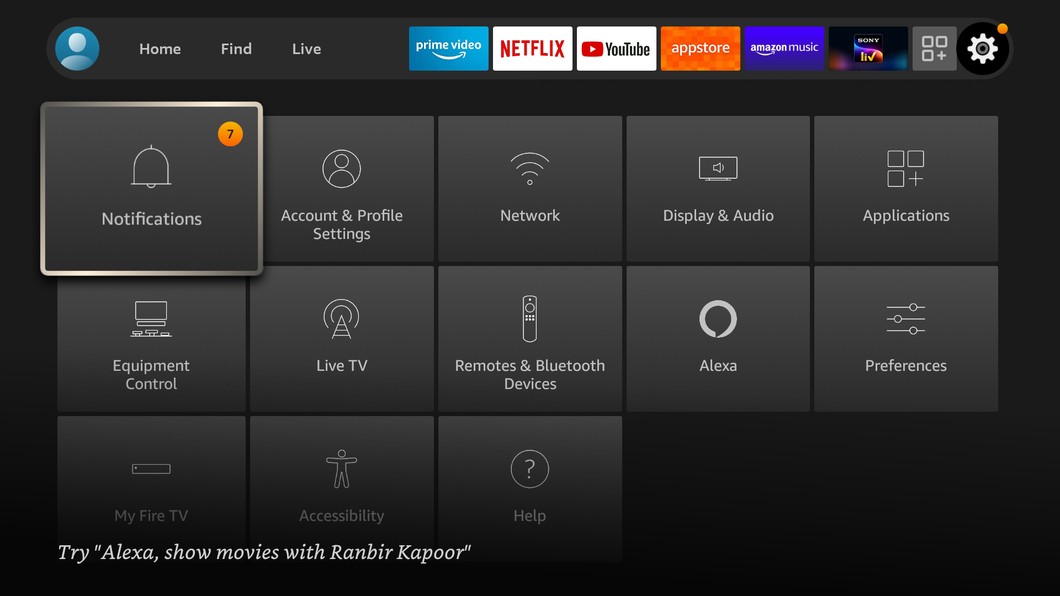 Once set up, the Fire TV Cube acts like an Echo speaker, listening for the wake word with its always-on mics. I has a built-in speaker, so it can respond to queries, give you weather updates, allow you to set alarms and timers, etc… via voice commands. Do note that this is the visual version of Alexa, similar to what you get on the Amazon Echo Show. So if you ask the Fire TV Cube for the weather, as an example, and your TV is switched on, it will show a weather pane on the screen. And just like an Echo smart speaker, it can control compatible smart home devices (like smart bulbs, smart plugs etc), and you don’t even need the TV to be powered on for this. However, it won’t play music standalone, and uses your connected TV for that. You can ask it to turn the TV on or off, play specific movies or shows from streaming services of your choice and much more. If you have your DTH set-top box configured with the Fire TV Cube, you can even use voice commands to switch to that specific TV input and put on a channel of your choice. It’s quite seamless, really. 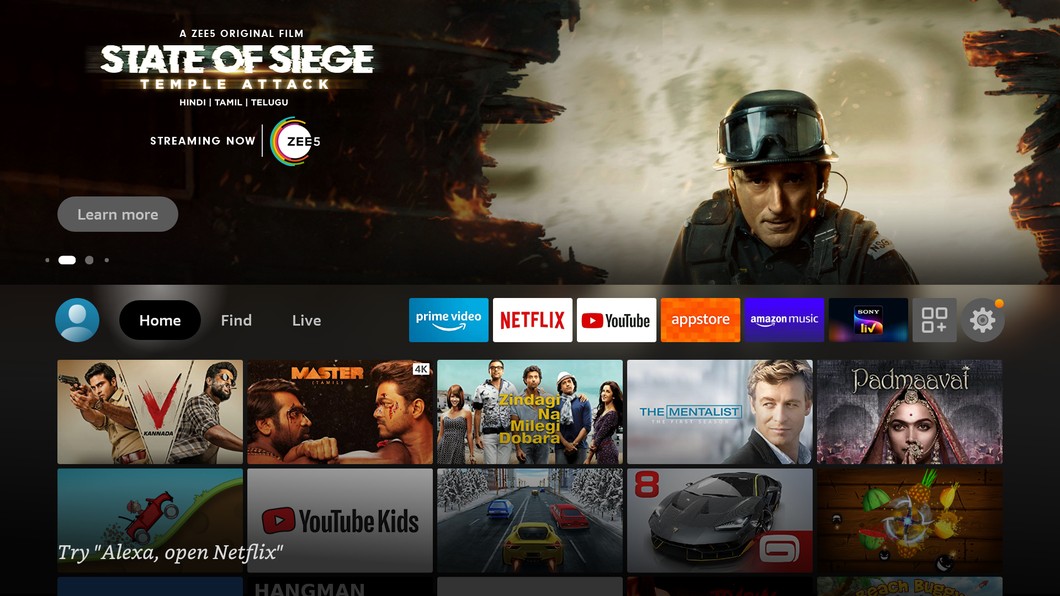 As far as the interface is concerned, you pretty much get the same deal as on the Fire TV Stick. The UI has recently received a major refresh, but if you aren’t used to it, it does look a little overwhelming at first. You’ll soon get used to it though. Content from Prime Video does seem to get more priority, but the UI also shows installed apps, content suggestions for various OTT services, and live content as well. There’s no dearth of apps available to install, and you’d find most streaming services covered. 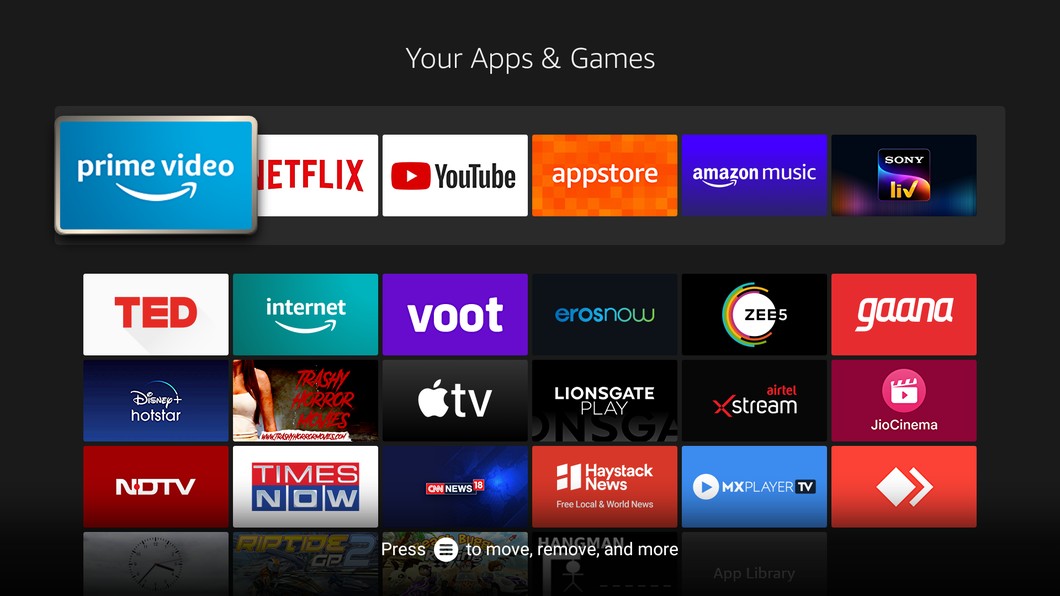 Apart from Prime Video and Netflix, you can install YouTube, Disney+Hotstar, Zee5, Sony LIV, Voot, Eros Now, MX Player TV, Lionsgate Play, Airtel Xtream, JioCinema, NDTV, YuppTV, Hungama Play, BBC News, Gaana, and so many others. You even get Discovery+ and Apple TV+. Suffice it to say, whichever streaming service you’re subscribed to, you should be able to find a compatible app to install. Basic games can be played as well, and the Fire TV Cube’s built-in 16GB storage should be enough for most users. 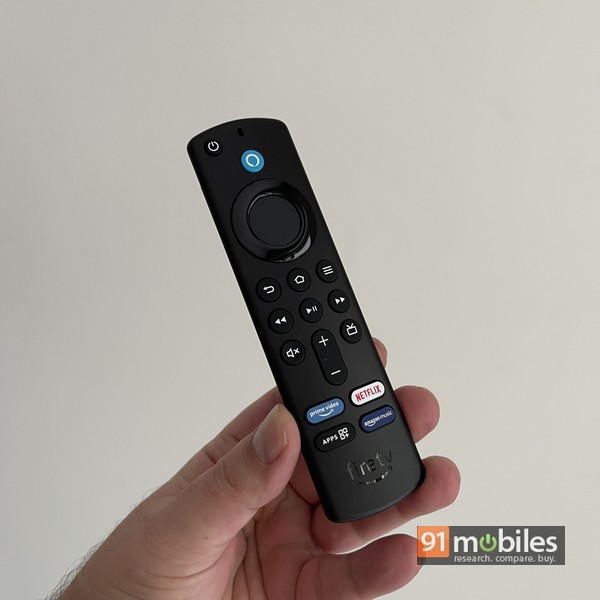 The included remote is very similar to the one that’s bundled with the Fire TV Stick, except that you get dedicated buttons for Prime Video, Netflix, Amazon Music, and one for accessing your app library. The voice button on top has been changed to blue, and sports the Alexa logo, signifying it can be used to invoke the smart assistant and issue voice commands via the remote’s built-in mic. This comes in useful when your TV / soundbar’s volume is high, and you don’t want to shout at the Fire TV Cube to make yourself heard while issuing a voice command. 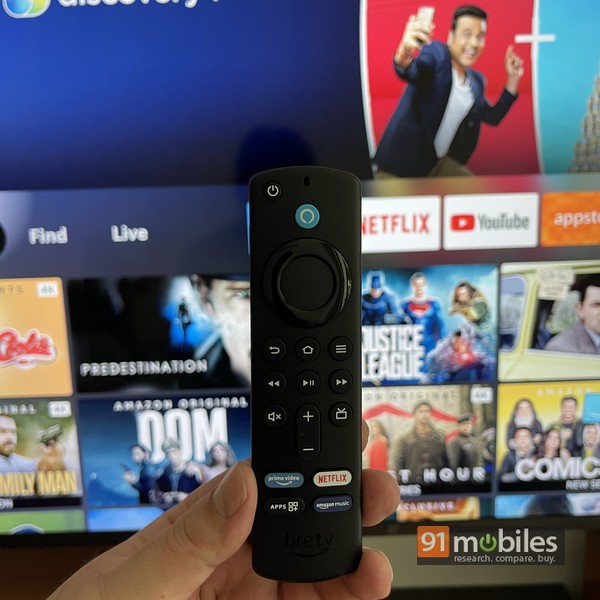 Thanks to the hexa-core MediaTek processor inside, the performance of the Fire TV Cube is very smooth. There’s no lag or stutter while navigating the content cards or the menus, and apps launch in a jiffy. Of course, the audio visual performance will completely depend on the capabilities of your TV and entertainment setup, but as far as the Fire TV Cube is concerned, it can output 4K, and supports most of the popular formats including Dolby Vision, HDR10, HLG and Dolby Atmos. 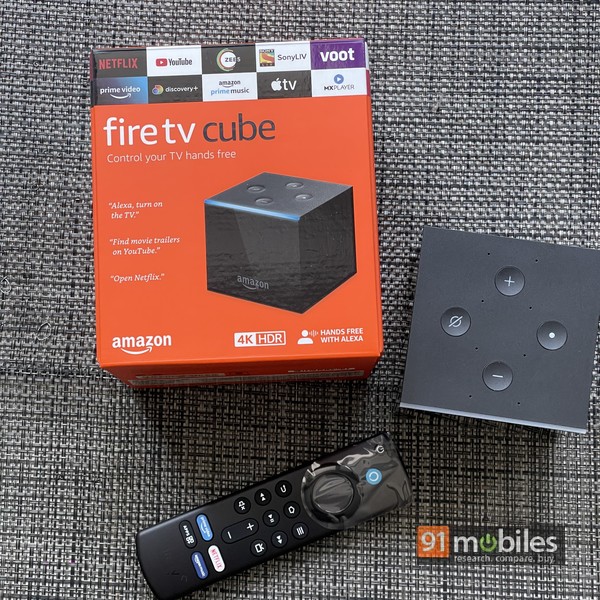 There’s no doubt that the Fire TV Cube is a useful, capable streaming device. Now whether it’s for you is a tough one to answer. You see, the Fire TV Stick 4K, which is priced at Rs 5,999, combined with an Echo Dot 4th-gen (Rs 4,499), will give you almost the same functionality as the Fire TV Cube, which is priced at Rs 12,999. The Fire TV Cube, however, is for you if you have multiple devices like a set-top box, soundbar, etc as part of your entertainment setup, and would like to control them all using voice. The additional outlay is not too high though, and as Amazon’s smoothest, fastest, most capable streaming device, the Fire TV Cube definitely gets a big thumbs up.