The iPhone SE 2022 is quite possibly the most polarizing handset from Apple’s stables. On one hand, the device packs the latest brawns from the Cupertino giant and harnesses the power of A15 Bionic SoC, ensuring everything the pricier iPhone 13 range can do, the SE 2022 can do just as well. On the flip side, the smartphone’s archaic design has raised a lot of eyebrows, with some techies dubbing the device contemptible by modern standards. So, is Apple’s most affordable iPhone riddled with compromises? Or, does the device pack in enough value to find a place in your pocket? Let’s find out.

There’s no escaping the fact that the iPhone SE 2022 looks exactly like its predecessor, which in turn resembles the iPhone 8 launched quite some time ago. In essence, buyers opting for the iPhone SE 2022 will have to – in a very un-Apple-like fashion – explain that they are, in fact, using a new iPhone. Even if you can overlook the phone’s resemblance to its predecessors, it’s hard to turn a blind eye to the competition that includes stylish, upmarket Android phones and all-screen iPhones. Now, that’s not to say that the phone’s design is bad. In fact, the smartphone feels every bit as premium as my iPhone 13 (review). 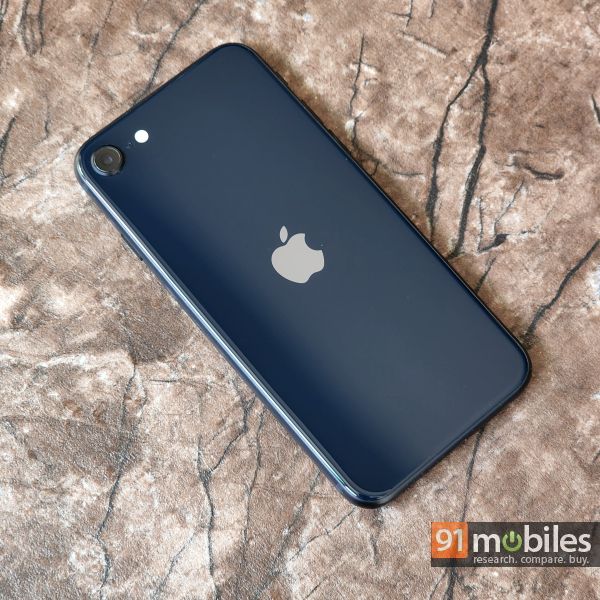 What’s more, in a sea of phones that are as big as a house, the SE 2022’s compact form factor comes across as a breath of fresh air. To wit, the phone is stupendously light and sleek, meaning you’ll barely get any wrist ache whilst using the device all day long. I also can’t remember the last time I was able to fit an Android phone in the pocket of my jeans comfortably – it’s the little things that reinforce my affinity towards the SE 2022. 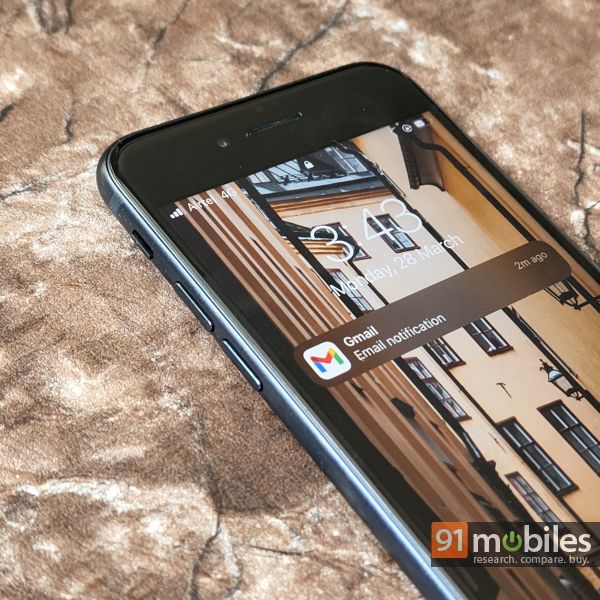 That’s not all, as the iPhone SE 2022 is IP67 certified and the device supports wireless charging as well. And, although Apple has rolled out an update to allow users to unlock their iPhones whilst wearing a mask via FaceID, it still cannot match the convenience offered by a physical fingerprint sensor. By the way, the capacitive sensor is extremely accurate and I never had to tap the unit twice to unlock the phone. All said and done, the iPhone SE 2022’s design, while dated, is still plenty functional. 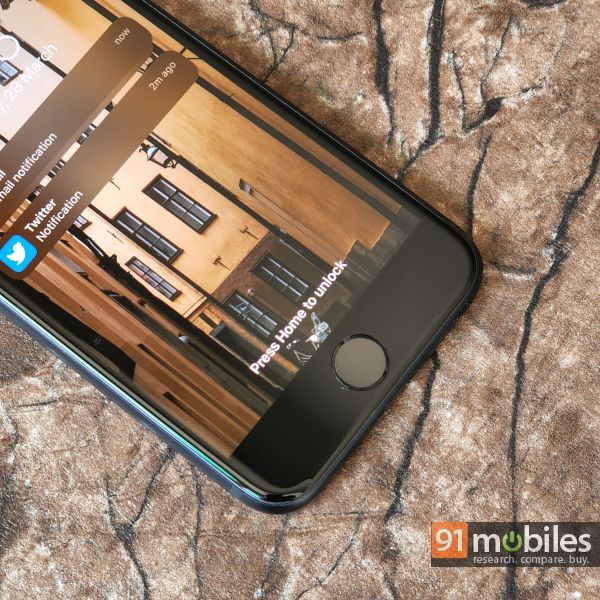 The handset’s display, on the other hand, leaves a lot to be desired. The smartphone ships with a 4.7-inch, Retina HD screen that feels cramped, to say the least. It’s seemingly outclassed by the iPhone 12 / 13 Mini’s panels too, which maximise the screen’s real estate and offer slender bezels. What’s more, unlike Apple’s modernised Mini range, the SE 2022’s display is backed by LCD tech, meaning you’ll miss out on the vibrant hues offered by the 12 Mini / 13 Mini’s OLED screens. Now, to the company’s credit, the smartphone’s screen offers pleasant viewing angles. What’s more, the panel gets plenty bright at 625 nits as well, so outdoor usage should not be an issue for most buyers. And, the phone can even relay HDR content via OTT services like Netflix. 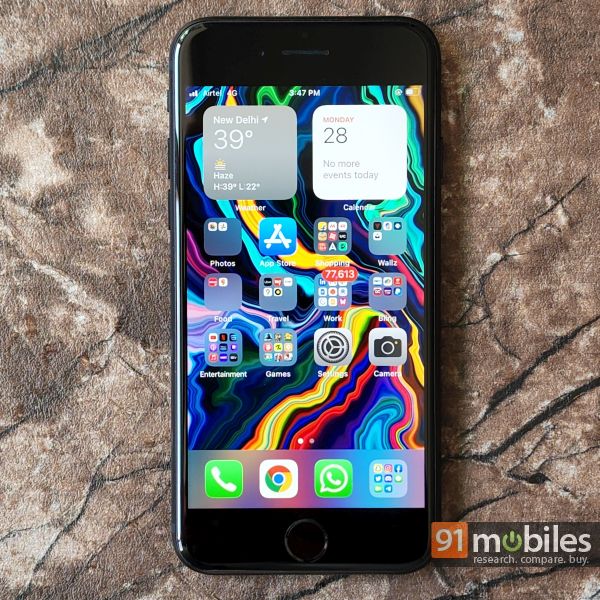 But, it’s quite difficult to acclimate to the unit’s minuscule size, especially if you’re coming from a big-screen phone. So much so, despite the device’s top-notch SoC, I rarely played any games that ran in landscape orientation on the set as my fingers would constantly run out of space. The same goes for watching movies on the fly too. While I could stream most content at an excellent quality on the device, the viewing experience paled in comparison to devices like the OnePlus 9RT (review). To wit, movies felt more immersive, and subtitles appeared more legible too. All said and done, the iPhone SE 2022’s panel is serviceable, so long as you don’t rely on your phone to play high-octane games or watch a ton of movies. 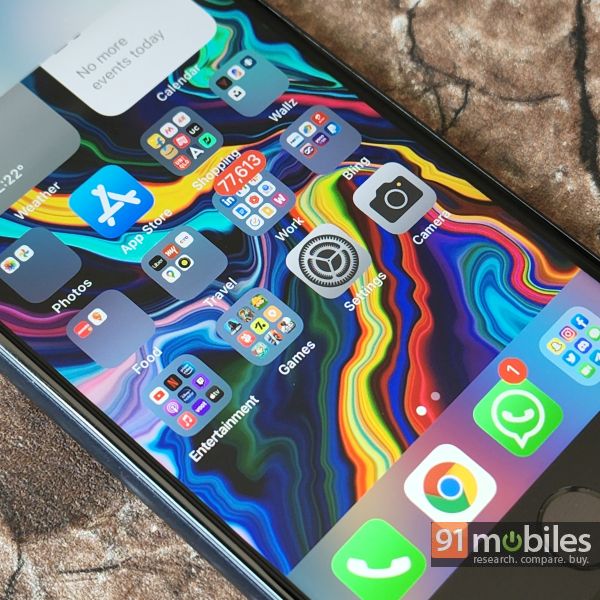 On to the performance front and here, the iPhone SE 2022 doesn’t disappoint in the slightest. The smartphone is backed by Apple’s A15 Bionic SoC which simply breezes through any and every task I threw at it. Now, as prefaced previously, the handset isn’t cut out for gaming. In fact, the phone’s battery dipped by around 12 percent after playing CoD Mobile for just 15 minutes. The smartphone’s pint-sized display doesn’t do it any favours either. To wit, you’ll notice that enemies appear unusually small, thereby making it difficult to aim and come out on top in heated gun battles. What’s more, the button layout feels congested too and on numerous occasions, I reloaded my weapon instead of pressing the fire button. 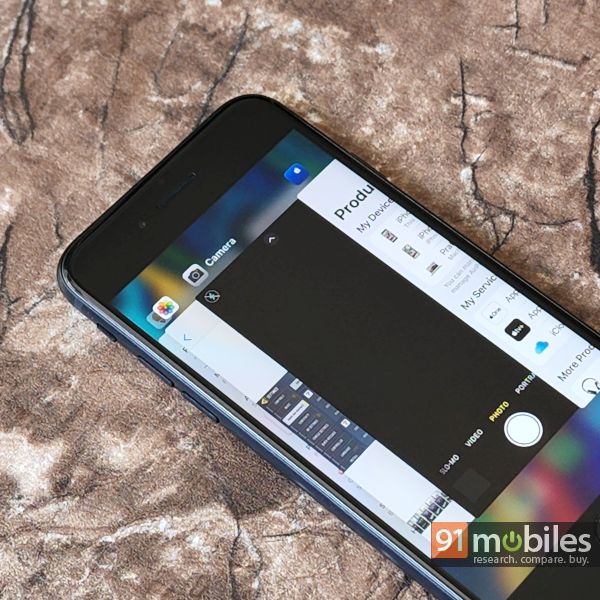 Still, if you’re hellbent on gaming on the phone, then you should know that the device can run demanding games like BGMI and CoD Mobile effortlessly. I tested the phone with the latter and the device could run the title at Very High Graphics and Max FPS, and that’s with other visual tweaks like Anti-Aliasing and Real-Time shadows enabled. Unsurprisingly, the SE 2022 does get a tad warm to the touch, however, that’s the case with most modern smartphones. Thankfully, the handset doesn’t throttle its performance even after playing games for around an hour at a stretch. The same is evident from the unit’s 3D Mark Extreme Stress test numbers wherein, the handset maintained 73.2 percent stability which, by the way, is on par with the result from the iPhone 13 as well. What’s more, the handset boots iOS 15.4 from the get-go, and knowing Apple, the device should receive software updates for years to come. That’s not all, as the phone offers an improved battery backup compared to the iPhone SE 2020 as well. In fact, I was netting around five hours of screen on time with the phone, with my usage comprising playing some casual games, aimlessly scrolling through various social media apps, and watching some videos on Youtube. 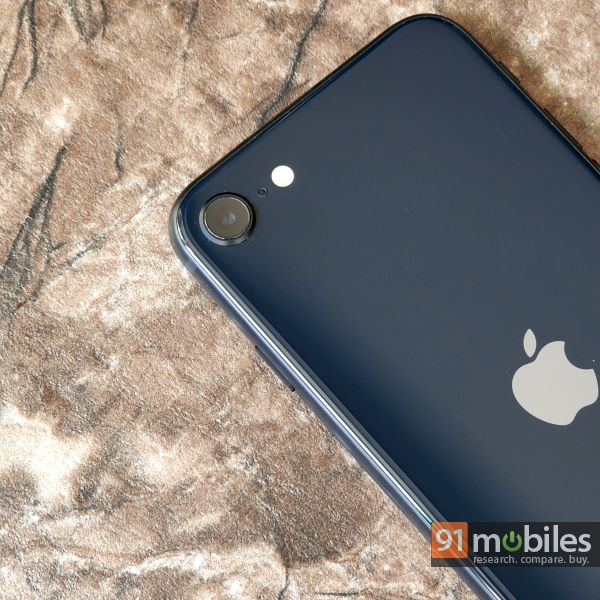 The iPhone SE 2022 offers a serviceable photography experience as well. Now, I’ve already compared the handset’s cameras to the iPhone 13 / 13 Mini, so do check it out. But, to cut a long story short, the iPhone SE 2022 is a dependable camera phone that can click stellar images during the day. The device gets a 12MP main sensor and a 7MP selfie camera which, for the most part, can click photos that are on par with the pricier iPhone 13 range. To wit, snaps taken during the day offer excellent dynamic range and authentic colours. Of course, the lack of an ultra wide sensor doesn’t help the phone’s case. Furthermore, while the device supports Apple’s Smart HDR 4 tech along with various photographic styles to spruce up the images, the SE 2022 misses out on a dedicated night mode. Unsurprisingly, the quality of snaps taken after the sun has set pales in comparison to competing devices. Still, if you only click images with a phone’s main camera – in particular, of human subjects – then the iPhone SE 2022 will not disappoint you.

The Apple iPhone SE 2022 retails for Rs 43,900 in India and for the price, the device is a great option for anyone looking to get into Apple’s ecosystem without burning a hole in their wallet. It also helps that the smartphone ships with a capable main camera and the unit performs like a champ too. That’s not to say that the phone is a no-brainer and despite its merits, buyers opting for the device will have to live with a long list of compromises, chief among them being the handset’s archaic display. 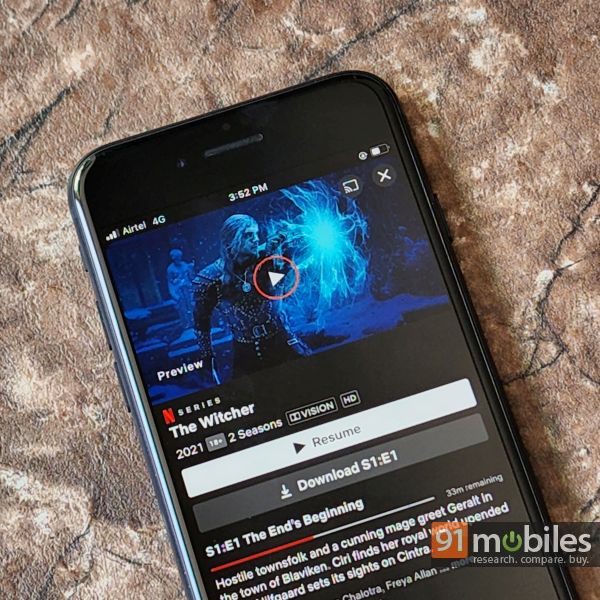 So, if you were eyeing the phone, know this – the handset is a reliable daily driver albeit will fall short of your expectations if you plan to game or watch a lot of movies on the set. Furthermore, while the phone’s primary sensor clicks gorgeous photos, you might want to look elsewhere if you take smartphone photography seriously and need a more versatile camera stack. To sum up, as good as the SE 2022 is, I wouldn’t recommend the device to power users or media buffs. For everyone else, however, the handset is a sound option.

Forget iPhone SE 3 at Rs 41,900, this is the compact iPhone you should buy