ASUS has announced the Flow X16 convertible gaming laptop in the Indian market and as expected, it carries a starting price tag of Rs 1,71,990. Apart from the Ryzen 6000 series CPU and NVIDIA’s RTX 3000 series GPU, the laptop has a 165Hz MiniLED option for viewing, touchscreen functionality, a 90Whr battery and a whole lot more. The ROG brand has been a top recommendation from my side for users who engage in heavy-duty gaming and the Flow X16, at least on paper, also looks like a device worth recommending. My review unit has an eye-watering price of Rs 2,61,990 so let’s find out in this review if ASUS’ latest gaming machine is worthy of your consideration. 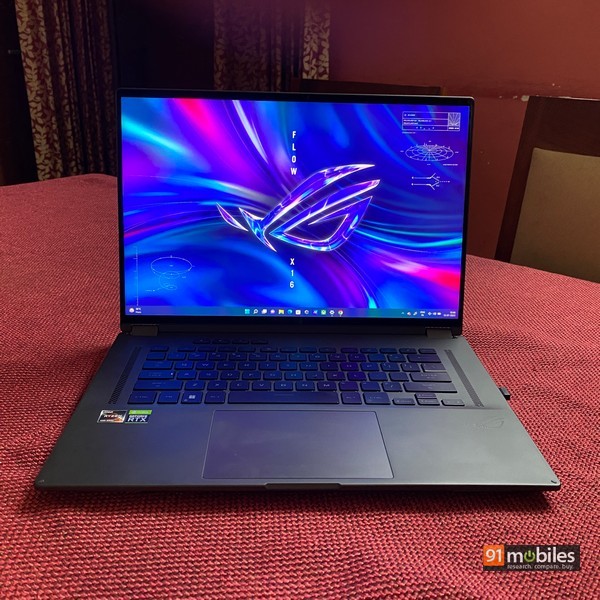 The Flow X16’s chassis height is just 19.4mm making it one of the thinnest gaming laptops on the market. Combined with a weight of just 2kg and a footprint equalling a standard 15-inch laptop, the ROG Flow X16 is a much more portable option than competing products. Of course, the device is not very useful without the massive 240W charging adapter that comes alongside it, so factor that into your calculations before hauling the Flow X16 off in your backpack. 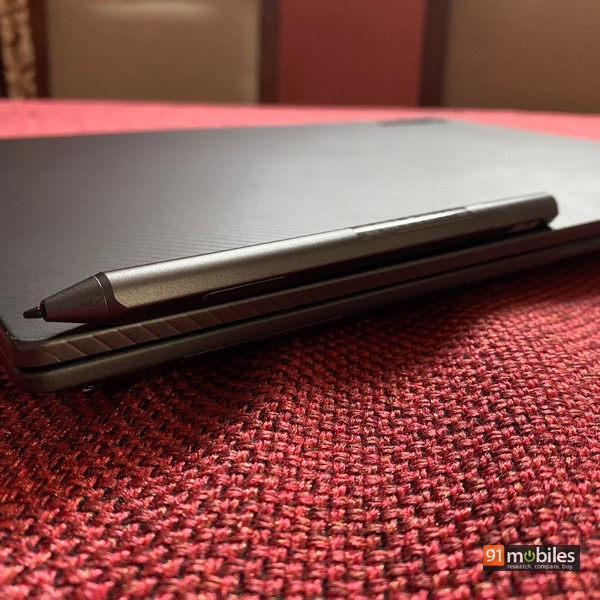 The construction of the laptop is quite rigid and unyielding, with no bends or creeks anywhere along the keyboard and palm rest area. By design, the lid is allowed to swivel all the way to the back for 360-degree functionality but the hinge’s lack of sturdiness introduces a lot of shake on the display while typing. Off Black is what Asus is calling the matte-grey colour scheme wrapping around the laptop. There is a textured carbon fibre-like finish on the palm rest and behind the lid, which does look pretty cool in my opinion. However, the lack of an outlandish gamer vibe, prominent on a few of the company’s high-end laptops, does make the Flow X16 look like a machine meant more for office use than heavy-duty gaming. 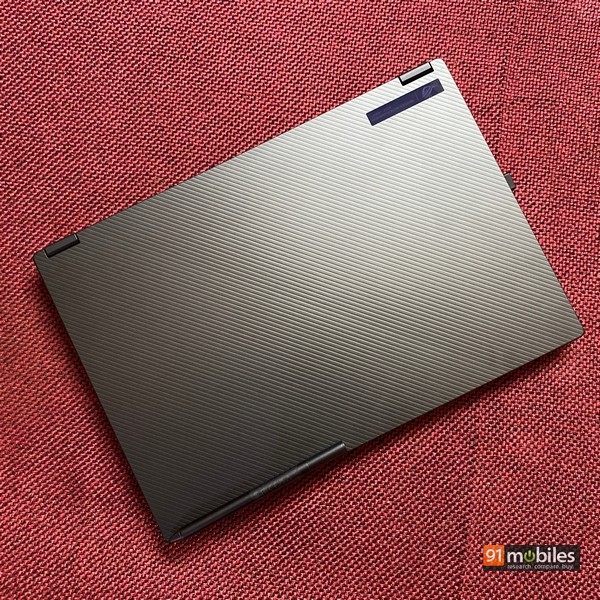 ASUS’ ROG lineup usually offers ample ports, and the Flow X16 definitely has plenty of them. For starters, there are two USB Type-C 3.2 ports, both of which support power delivery and DisplayPort capabilities. Apart from that, you get two USB Type-A 3.2 ports, an HDMI 2.1 slot, a microSD card reader, and a 3.5mm combo audio jack. Lastly, keeping up with tradition, the Flow X16, like previous Flow series devices, also gets the proprietary ROG XG Mobile interface port for attaching an external GPU. Wireless options on the device include the standard Wi-Fi 6E and Bluetooth 5.2 connectivity. 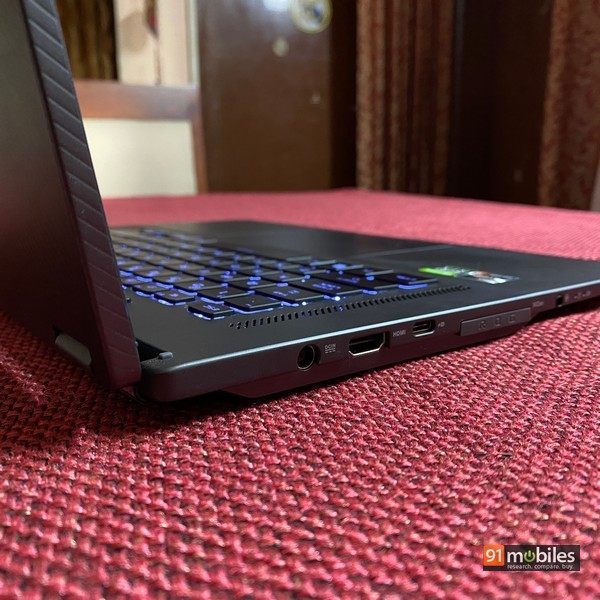 I have received the 16-inch (2,560 x 1,600) MiniLED version of the Flow X16. It’s dubbed the Nebula HDR display, and I have to say that very few laptop screens can outmatch this panel. While not in league with traditional OLED displays, MiniLED screens are certainly a cut above the sea of LCD-toting laptops in the market. There are 512 localised dimming zones across the panel which offer deeper blacks, better contrast ratios, and richer colours whether it is watching the next episode of Better Call Saul or exploring the murky underbelly of Night City in CyberPunk 2077. 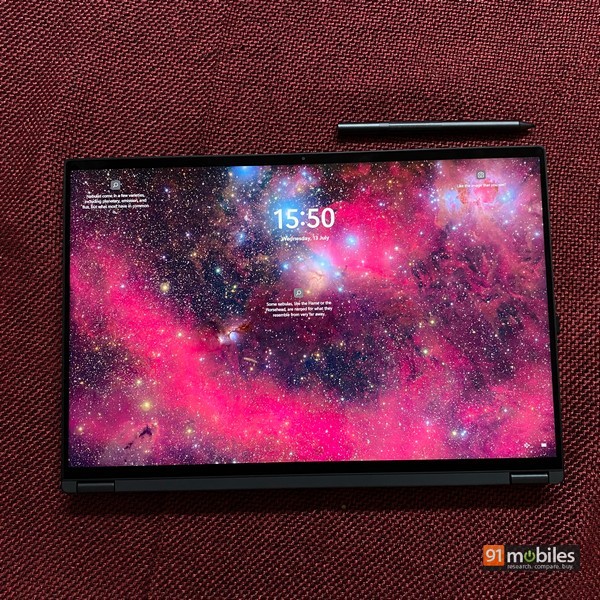 At 1,100 nits of peak brightness, this is a machine that thrives even in the blistering sunny afternoons of Delhi. Pantone validation, 100 percent DCI-P3 coverage, Corning Gorilla Glass protection and a 16:10 aspect ratio work towards enhancing productivity on the laptop in tasks such as colour correction or photo editing. Of course, the display comes with a touchscreen and stylus support, but the laptop’s relatively bulky size, as compared to more traditional two-in-one laptops, deters me from using this particular functionality. Even so, if you are inclined to get your creative juices flowing, ASUS includes the stylus inside the box and it can magnetically attach to the lid’s back. The refresh rate on the panel is 165Hz which is not the highest in the segment, but to be fair most AAA titles are rarely going to push beyond it given the hardware on the laptop.

ASUS’ standard chiclet keyboard can be found on almost all ROG devices and the Flow X16 takes its cues from the Zephyrus lineup. The typing experience is quite pleasant and the keys are spaced out evenly owing to the lack of a dedicated numpad that a few OEMs like Lenovo and MSI add to their devices. As far as backlighting on the keyboard is concerned it is adjustable to three levels, and has a full RGB implementation customisable in the Armoury Crate app. 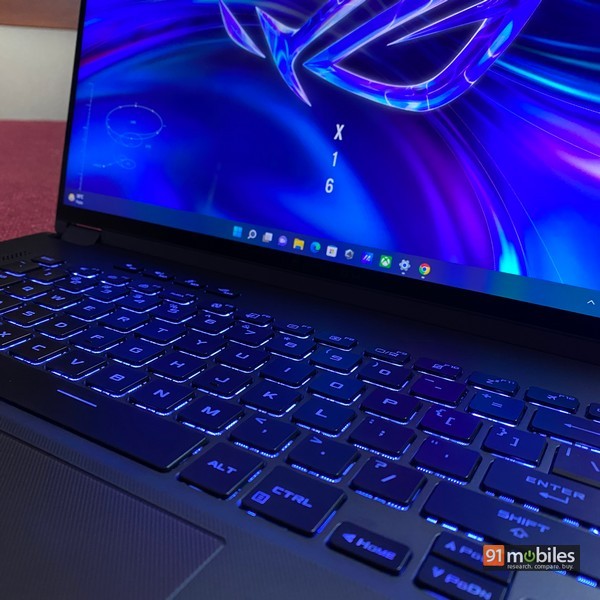 Volume controls, microphone and ASUS Armoury crate hotkeys are just present separately above the keyboard for ease of functionality. The trackpad is nothing out of the ordinary except that its palm rejection is not up to the mark. Like always I recommend attaching an external mouse for more precise usage whether it is casual browsing or gaming.

My review unit, which is also the highest specced version of the device, comes with AMD’s Ryzen 9 6900HS chipset running underneath the hood. Of course, the chipset packs in more than enough punch to push through multitasking, Chrome browsing, Microsoft Office and other tasks which are lenient on the SoC. 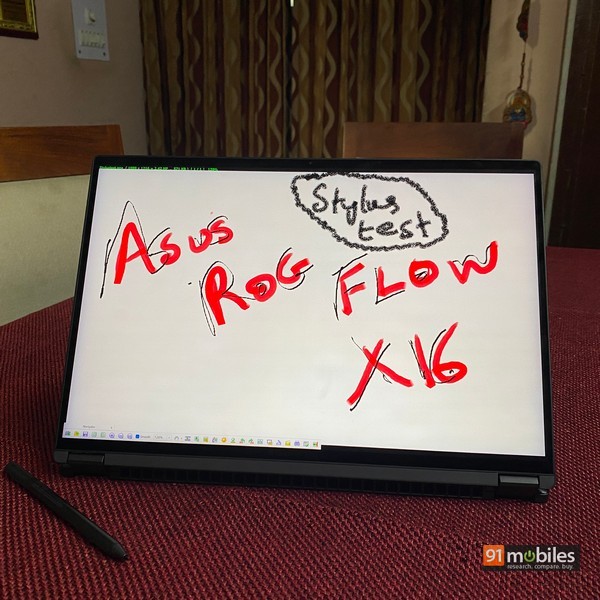 Running a few benchmarks on the Flow X16, the results I got were more or less in line with what I was expecting. Keep in mind I kept the system on Turbo mode via the Armoury Crate app for maximum performance. On Cinebench R23 the multi-core result of 14,156 is just about the second highest I’ve seen on a Windows machine and just behind the Strix Scar 15, which runs on the Intel i9 12900H. In terms of productivity, PCMark 10 churned out a fairly decent score of 6,736 which is again just slightly below what the Scar 15 can do. 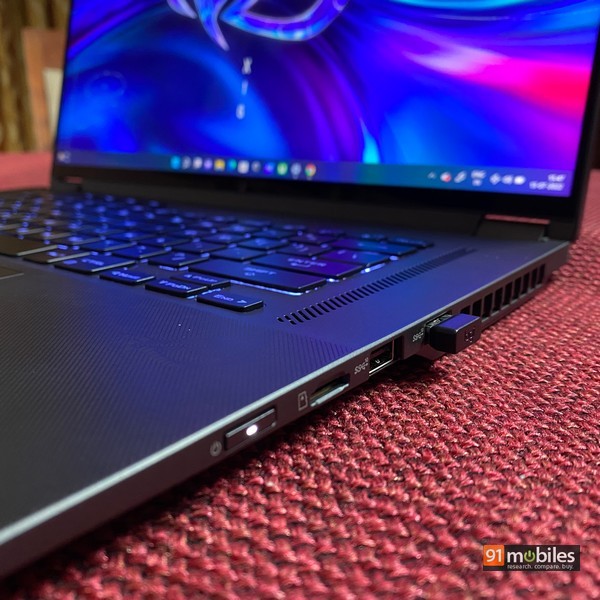 As for memory and storage needs, the former comprises two DDR5 SO-DIMM slots capable of housing 32GB each for a total of 64GB RAM. The latter sees a 1TB M2 2280 PCIe 4.0 SSD alongside another slot which can be used to further increase the capacity by 1TB in a RAID 0 configuration. I did run CrystalDiskMark’s storage speed test and came away with impressive read and write speeds of 6,597MB/s and 4,959MB/s respectively. In terms of thermals, ASUS has used a tri-fan setup called the Frost Force cooling system. It is made up of two regular fans placed on either side of the heatsink, while a third fan is placed in the centre of the chassis to provide an extra layer of fresh air over the components. While in theory, this does sound like a good way to reduce heat, in practical usage, especially when the laptop is kept over a table, the fans fall a bit short of cooling the system down. The CPU temperature, after about 20 minutes of heavy gaming, crossed 95 degrees and hovered around the 98-degree mark. The area just above the heat vents on the back can become very hot as well. Thankfully the GPU remained relatively cooler at around 85 degrees. Even so, the triple-fan design is remarkably silent even when I manually set up the fans to rev up to their maximum speeds. 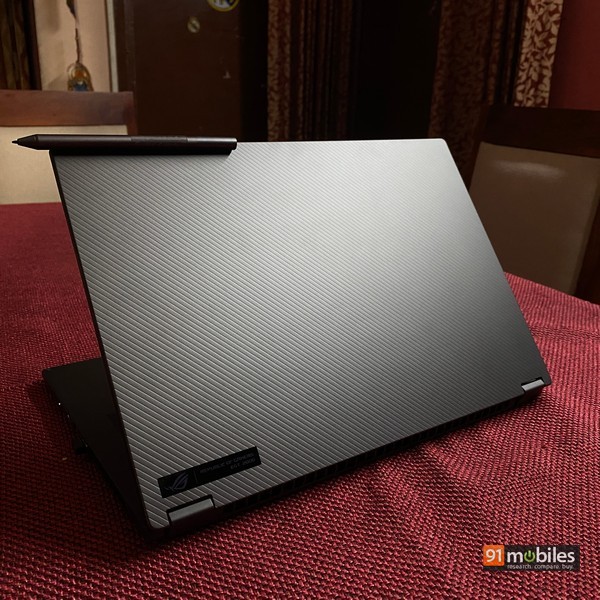 NVIDIA’s RTX 3070Ti is the GPU on my unit although you can also get the RTX 3050 on the base variant. Graphically, the ROG Flow X16, despite its relatively slim form factor, is able to churn out frame rates expected of a 3070Ti machine. Importantly, ASUS has implemented its capable MUX Switch which bypasses the CPU’s integrated graphics and allows the display to communicate directly with the GPU. This increases the fps count further and gets in better graphics. You can read about it in more detail via my ROG Strix Scar 15 review. In any case, I ran a few AAA titles to gauge the system’s graphical prowess and came away quite satisfied. 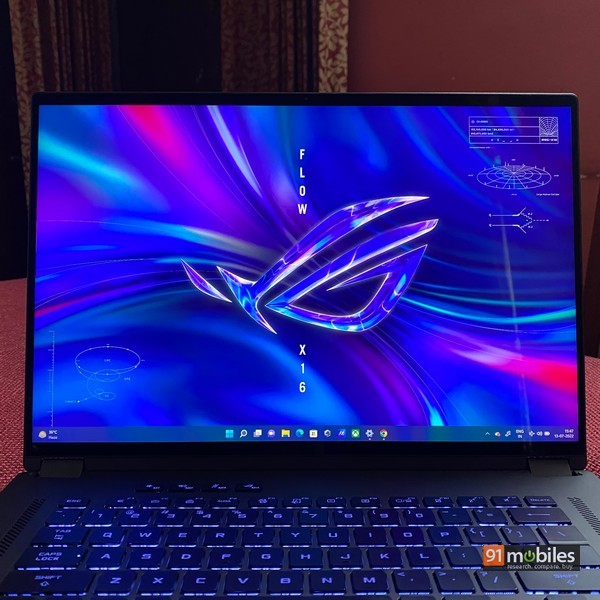 Apart from that the quad-speaker setup, comprising two 2W dual-force woofers with Smart Amp Technology and two 2W tweeters, is perhaps the best audio setup I’ve heard outside the latest MacBook Pro lineup. In terms of the battery life, the 90Whr cell is certainly helped by AMD’s reliable power efficiency. I got about 5-6 hours of regular usage from the device on battery power with the resolution and refresh rate cranked up. As always, without the 240W charging brick that comes with the Flow X16, there will be no point of gaming on the machine.

At its price point, the Flow X16 goes up against laptops from ASUS’ own stable of products like the aforementioned Strix Scar 15, and others like MSI’s GE76 Raider (review). However, the unique MiniLED screen, the relatively thin form factor without compromising on performance, incredible speakers and a good battery backup, all make the ROG Flow X16 the laptop to beat this year.