MSI has, for long, offered top-notch gaming laptops that come loaded with impressive hardware and tout stylish, sleek designs. The company’s GE76 Raider series, in particular, has been my go-to recommendation for gamers with deep pockets. Recently, the company announced the 2022 refresh of the GE76 which, this time around, makes use of Intel’s 12th-gen Alder Lake mobile CPUs. 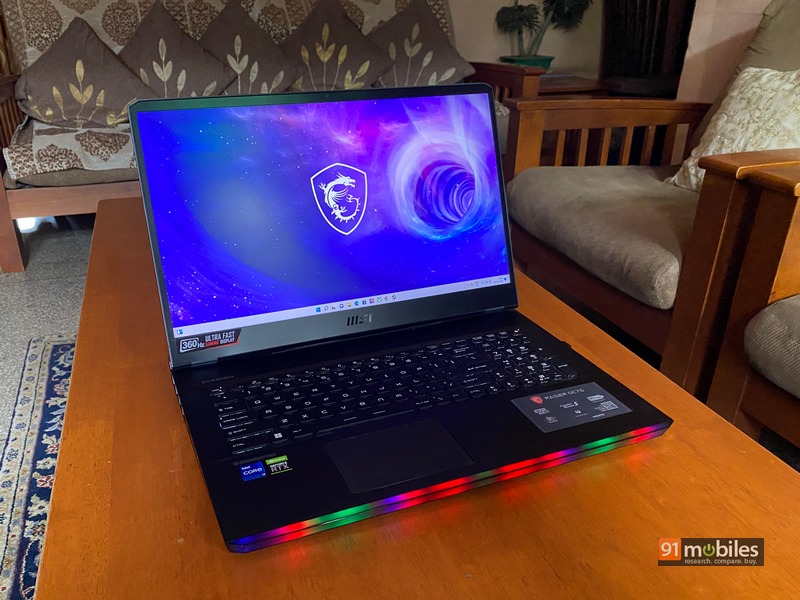 The device recently arrived in the Indian market and the unit costs a whopping Rs 2,85,990, should you spec it up with Intel’s 12th gen Core-i7 12800H CPU and NVIDIA RTX 3070Ti GPU. Understandably, the GE76 Raider’s MRP is not for the faint of heart and with the market flush with competition, it is imperative to see if the laptop’s substantial price tag is justified. In this detailed review, let’s try and answer that very question.

The GE76 Raider’s front is dominated by a sizeable 17.3-inch panel. Now, gaming laptops tend to be chunky, and MSI’s latest is no exception to the rule. In fact, the device tips the scales at nearly three KGs and correspondingly, will weigh your shoulders down. To the unit’s credit, the laptop offers a relatively sleek profile and from the sides, looks the part of a standard-sized laptop. What’s more, the unit doesn’t feature any gaudy decals on the lid and instead, ships with a dark grey colour scheme that wraps around its chassis. 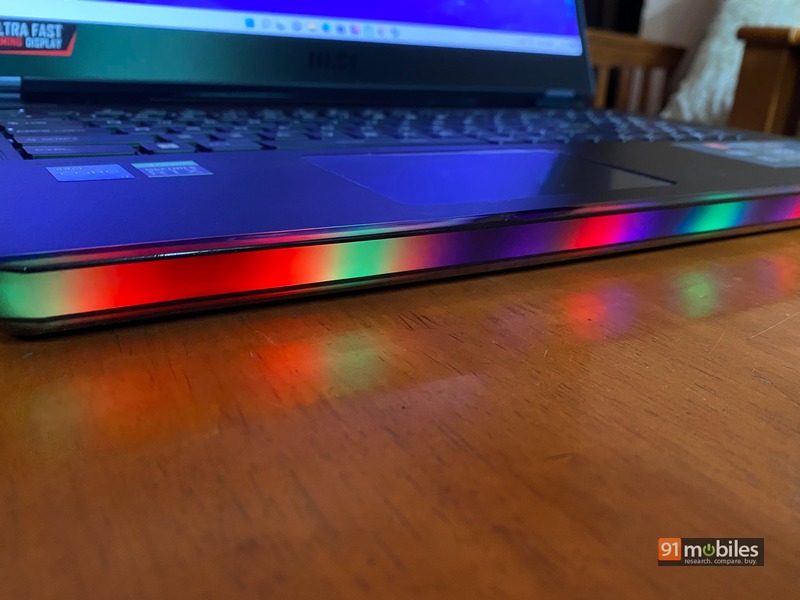 Interestingly, the machine ships with an RGB lighting strip at the bottom which exhibits a diffused and soothing glow. Most of the ports are placed on the device’s back, with the heat vents housed on either side of the unit’s frame. The hinge mechanism felt robust enough too and the unit offers ample friction, thereby ensuring the lid doesn’t wobble all that much when you’re using the laptop. 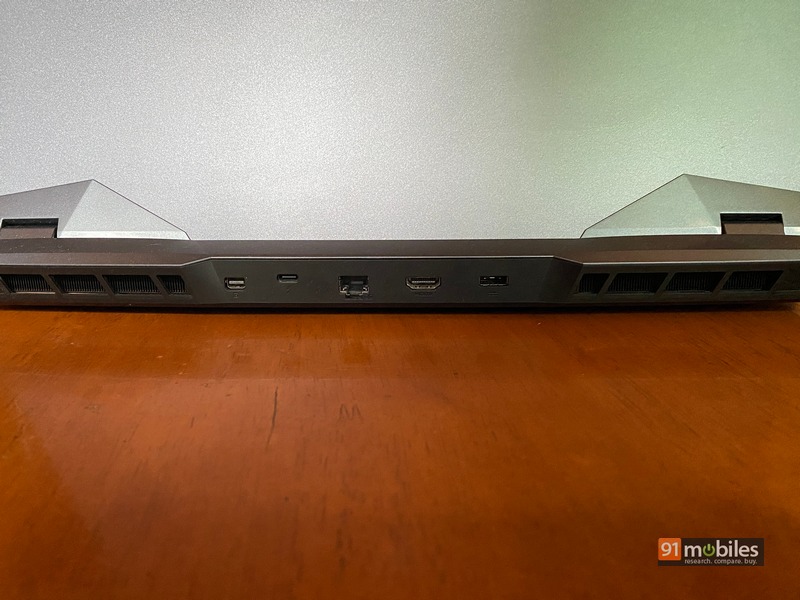 But, coming back to the laptop’s I/O, the GE76 Raider ships with a generous port selection and comprises a miniDisplayPort 1.4, a USB Type-C with Thunderbolt 4 connector, an ethernet slot, an HDMI 2.1 port, and a charging port. That’s not all, as the laptop’s right-hand side features two USB Type-A 3.2 Gen 2 ports and an SD card reader, while the left side features another USB Type-A 3.2 Gen 2 port along with a USB Type-C connector and a 3.5mm headphone jack. For wireless options, the laptop comes with support for the latest  Wi-Fi 6 and Bluetooth 5.2 standards. 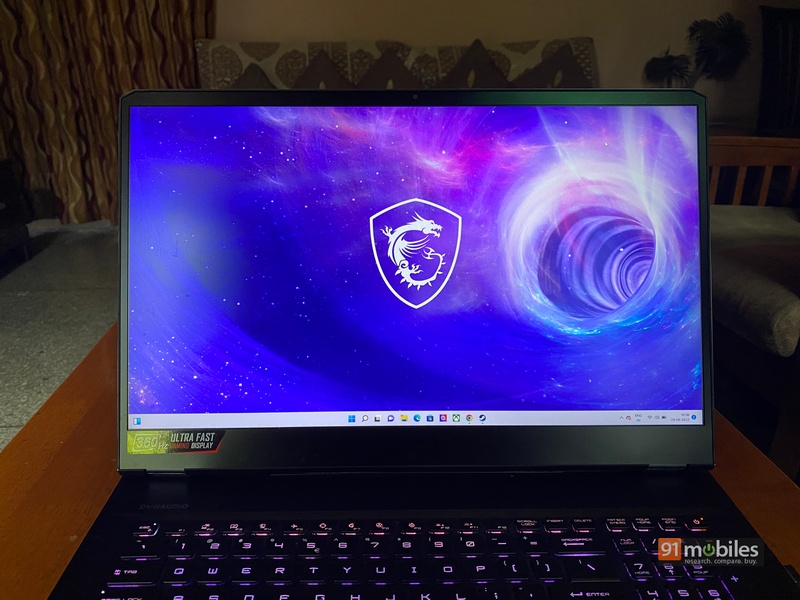 Display-wise the 17.3-inch 360Hz FHD panel is one of the smoothest in the business. What’s more, the screen gets adequately bright at 300nits and consequently, you should find the display legible even in well-lit environments. The panel also comes with HDR10 certification which implicitly makes viewing content a more pleasurable affair. On the flip side, the laptop’s display is not the most colour-accurate panel I’ve laid my eyes on so if you were looking to pick up a machine to colour-grade your photos or videos, you might want to look elsewhere. 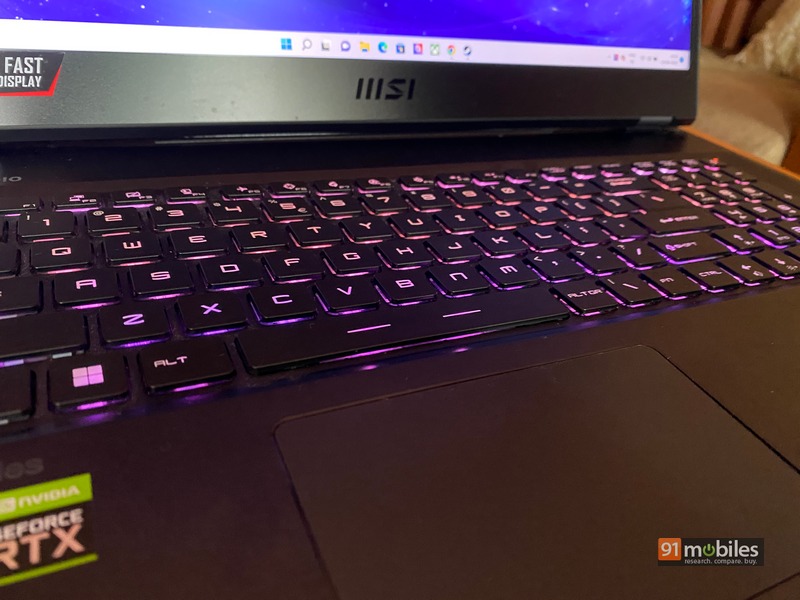 Moving on, the GE76 Raider ships with a full-sized keyboard that is replete with large arrow keys and a Numpad. Arranged in the regular six-row layout, the keyboard deck felt rather spacious and I acclimated to the same in no time. The keys offer adequate travel too and the RGB backlighting can be adjusted by up to three levels. And, while most users will probably plug in a gaming mouse with the set, the GE76 ships with a serviceable trackpad that gets the job done.

Coming to the meat of the matter, the MSI GE76  Raider is backed by Intel’s 12th gen Core-i7 12800H CPU. That said, buyers looking for more computing prowess can pick up the machine with an i9 12900HK chip as well. Unsurprisingly, the laptop crunched through my workload, and despite opening around 50 Chrome tabs, the entire suite of Microsoft Office, running several downloads on Steam in the background, and playing videos on the VLC player, the unit could seamlessly switch between the apps. Benchmarking numbers paint a similar picture, with the laptop outputting 11,660 and 9,681 points in the Cinebench R23 multi-core test and a Geekbench 5 test run respectively. Moreover, PCMark 10 showed a score of 7,274 which is in line with the 12th-gen H series CPUs I have tested previously. Memory-wise, the laptop has 32GB of DDR5 4,800MHz RAM and 2TB of PCIe Gen 4 SSD storage. And, fret not as the SSD is plenty fast for everyday use too. In fact, in CrystalDiskMark, the unit net sequential read and write speeds of 6,756MB/s and 4,555MB/s respectively. 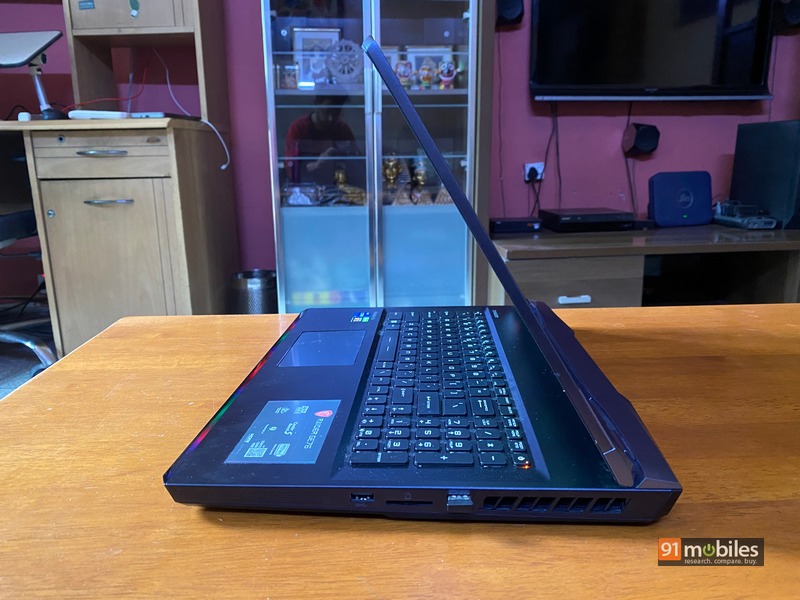 Talking about the graphical prowess of the machine, the laptop ships with an NVIDIA RTX 3070Ti GPU which should suffice for all your gaming needs. What’s more, the thermal design on the GE76 Raider appears to be quite effective as the GPU temperatures plateaued at around 90 degrees. The keyboard and palm rest do get warm too, but not to a point where it causes any discomfort. That said, with the fans running at full tilt, the noise generated by the machine can be quite loud so I’d reckon you use a pair of headphones when playing games on the unit. 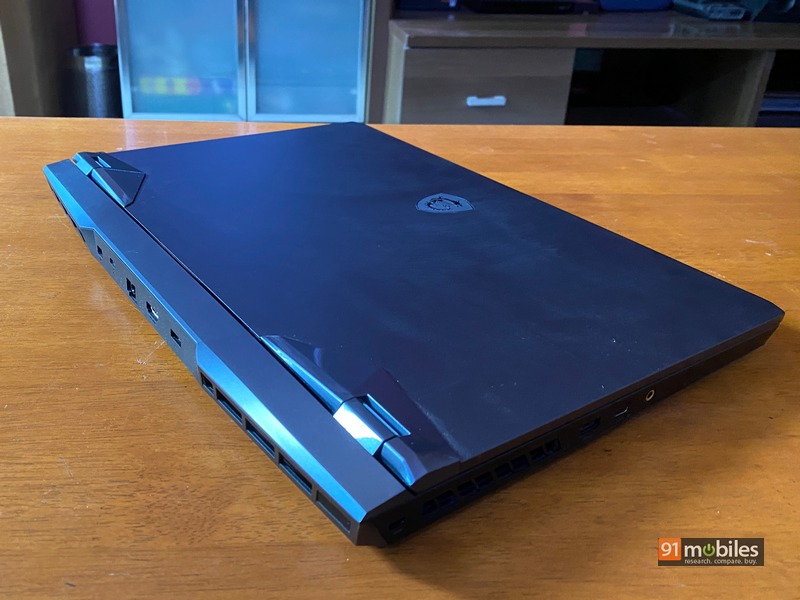 During my entire review period, I kept the GE76 running on Extreme performance mode so let’s talk about some numbers. God Of War at Ultra settings and Ray Tracing enabled delivered a cool 70fps with about 120-130W being utilised by the GPU. On CyberPunk 2077, at Ultra graphics and Ray-tracing, the frame rate achieved was between 60-70fps which is also quite good. The thing to note here is that the display is capped at 1080p which does help in pushing more frames without overloading the GPU. Witcher 3 at the highest settings on the GE76 Raider is able to throw 60fps  while less intensive titles like CS: GO and Valorant easily touched upwards of 250fps. 3DMark’s Time Spy benchmark revealed a score of 10,650 which is about what you can expect from the RTX 3070Ti. 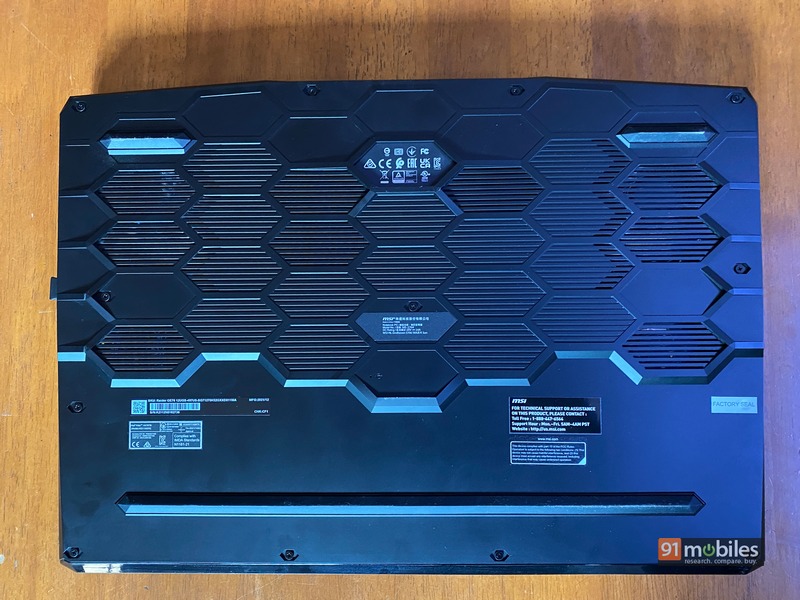 Moving on, the laptop also has dual speakers that have been tuned by Dynaudio and are accompanied by a pair of woofers. Needless to say, the laptop’s audio setup paves the way for an enjoyable media consumption experience. What’s more, the unit’s headphone jack supports Hi-res audio and Nahimic by SteelSeries offers excellent EQ presets as well. Unfortunately, the device doesn’t feature any biometrics so unlocking the laptop is a bit of a hassle.

The GE76 Raider has a 99.9Whr battery which is just about the most capacious cell on a laptop. However, with the taxing hardware in place, the GE76 Raider doesn’t have the best battery life. On a full charge, without any GPU-intensive activities and with the display set to 360Hz, the device is able to deliver about five hours of screen-on time. Accompanying the device is a 240W charging adapter which takes about 2 hours to fully juice up the cell. Needless to say, the best experience on the GE76 Raider is going to be while the device is connected to the charger and not on battery backup. 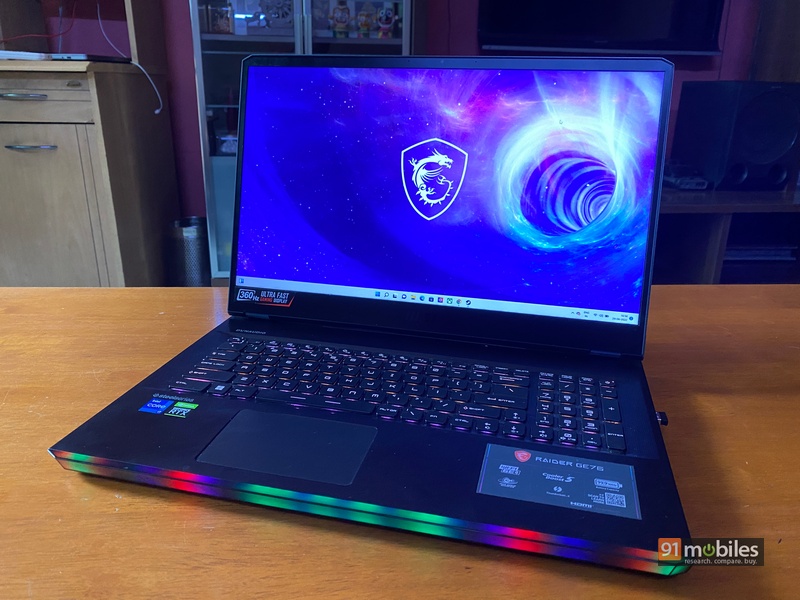 The MSI GE76 Raider is definitely a laptop worth certain considerations. It has excellent thermal capabilities which provide a sustained gaming experience while the hardware is definitely quite capable to run any AAA title thrown its way. The price tag of Rs 2,85,990 is a bit high considering how the ROG Strix Scar 15 gets almost all the features with the addition of a 12th-gen i9 12900H SoC at a lower cost. However, if you are interested in the larger screen size, excellent speakers, and the overkill 360Hz of refresh rate, the MSI GE76 Raider can be your gaming machine of choice.