Last year, Taiwanese tech giant ASUS introduced the first out and out gaming smartphone in India in the form of the ROG Phone (review). This year, the company is taking ‘do you even game, brah’ to a whole new level with the all-new ROG Phone 2 (first impressions), which ships with the beefiest battery in its segment, the fastest chip in the market and, the most responsive display on any smartphone yet. What’s more, the handset’s pricing makes it much more gettable compared to its predecessor too. 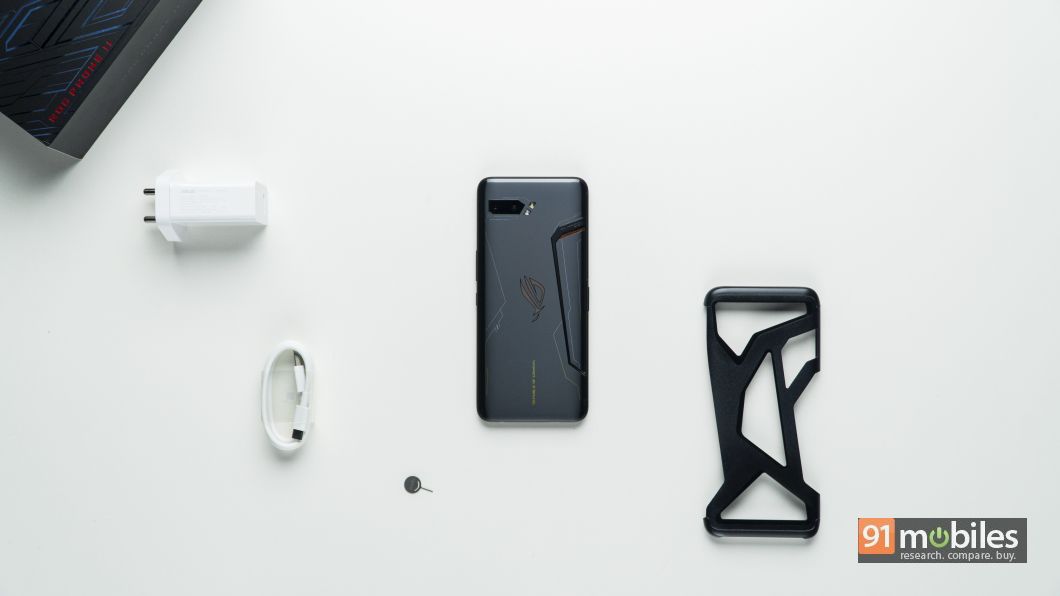 Now, I know what you’re thinking – if it’s too good to be true, then it probably is. Thankfully, in the case of the ROG Phone 2, it truly is a stellar product which comes closest to being a ‘do everything’ phone than any other gaming phone yet. Here’s how.

ASUS has seemingly glossed over the design of the ROG Phone 2 as the smartphone looks eerily similar to its predecessor. In fact, barring a few cosmetic changes, it’s hard to tell one from the other. But, for all the curious cats in the audience, the ROG Phone 2 doesn’t ship with a capacitive fingerprint sensor akin to its forerunner and instead, opts for an in-display one. Moreover, as opposed to the OG ROG Phone, the handset features just one vent on the back for the company’s proprietary 3D Vapour chamber, which by the way, has been tweaked to be even more effective at removing heat from the phone under intensive loads. I did notice some thermal improvement during my time with the ROG Phone 2, though it’s hard to put a pin on whether that was due to the newer cooling solution or owing to the more efficient Snapdragon 855+ chip. 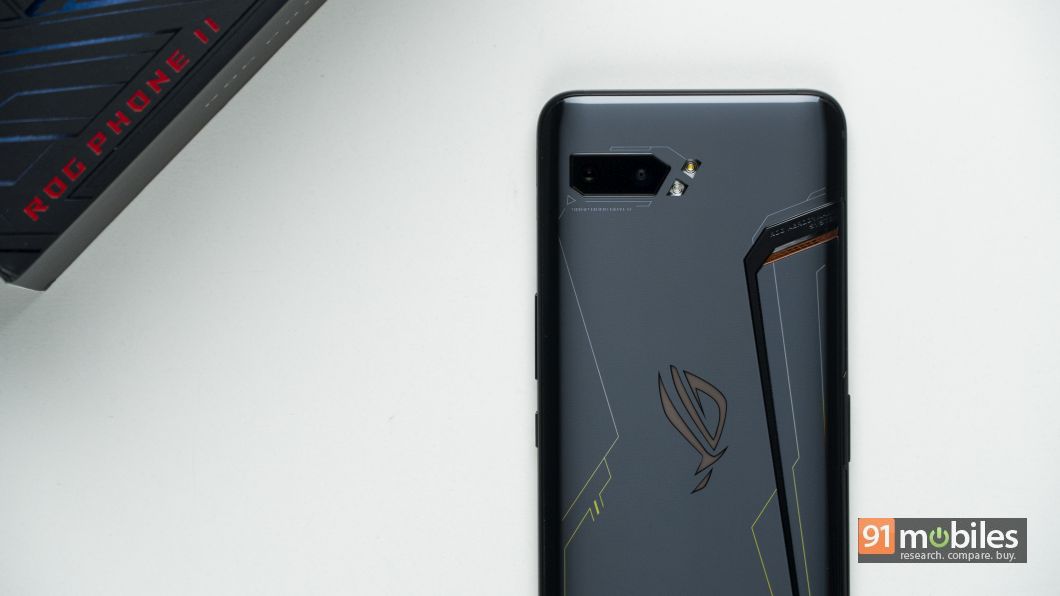 Moving on, the ROG Phone 2 also features more eccentric lines on the back which at certain angles, emanate the colours of a rainbow. Barring that, the ROG Phone 2 felt surprisingly familiar to hold and use during my time with it. The handset is, undoubtedly one of the heaviest phones I’ve ever reviewed and it’s bafflingly tall too. That, coupled with its slippery, glossy and smudge-prone back, and I’m glad that the company bundled a case with the retail unit of the phone. 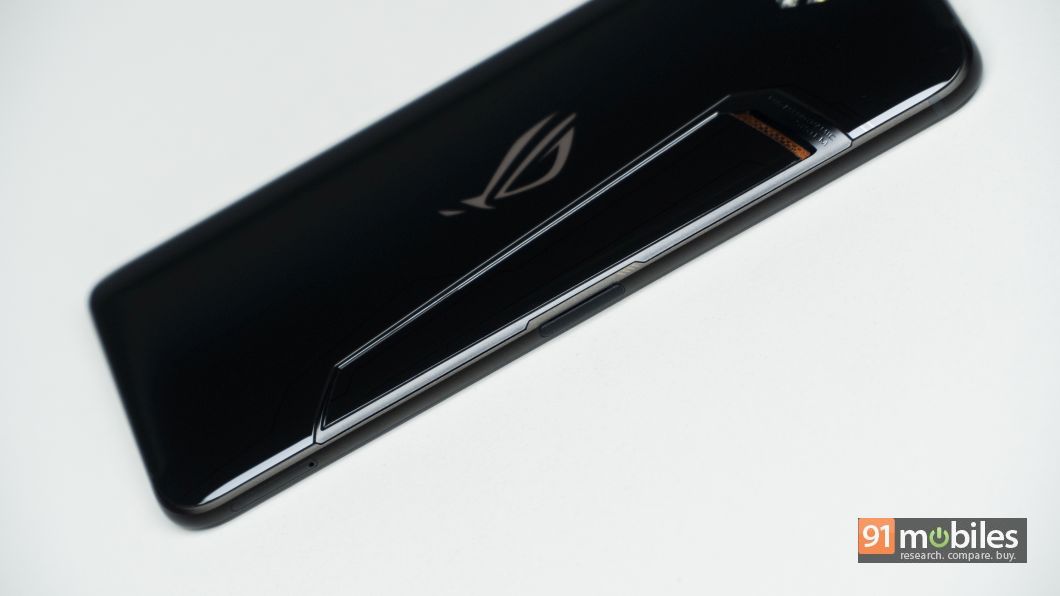 Now, while the phone’s design is somewhat new, the company retained all the features which made its predecessor a hit in my books. So, you still get a headphone jack, along with a USB Type-C port for charging at the bottom. The handset also comes with support for the company’s all-new AeroCooler dock, which docks on to the left fascia by means of a proprietary dual Type-C connector. 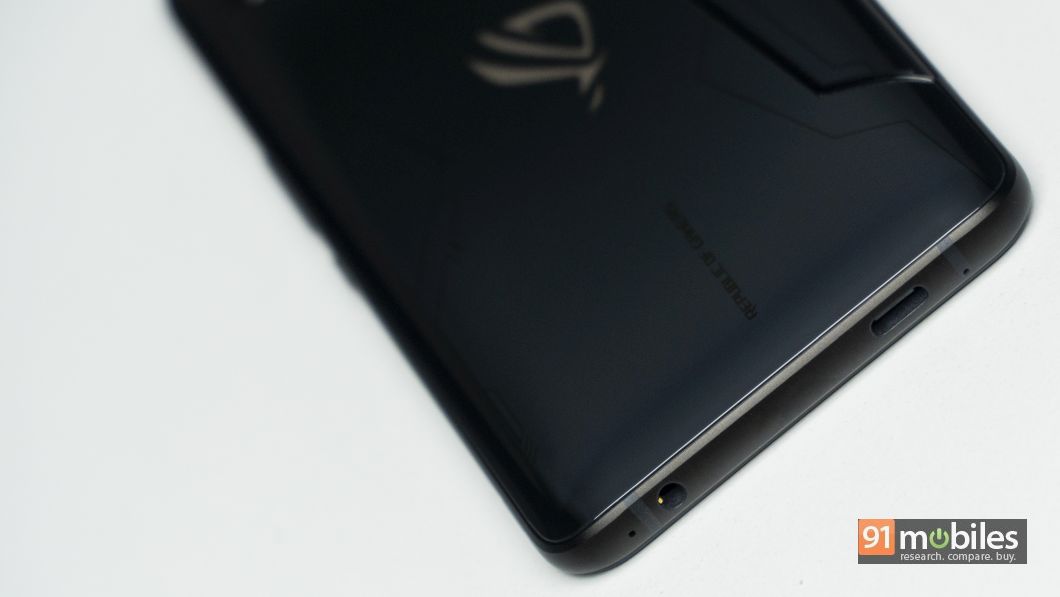 Fun fact, you can charge the ROG Phone 2 using the port on the smartphone’s left-hand spine too, which is ingenious as it allows users to have a comfortable grip whilst gaming on the phone. Then, there’s the brand’s RGB logo towards the back, which can be customised to output a pattern or a colour for different games, notifications, the works. Lastly, the device features what might very well be the loudest front-firing, dual stereo speaker setup to ever grace a smartphone. Similarities and differences aside, one look at the ROG Phone 2 and you’ll be convinced it’s a gaming smartphone. The design of the smartphone is, by far the edgiest in its price segment and I really like it. It’s clearly not for everyone and I definitely got some mixed reactions when I showed the handset to my friends and colleagues. Correspondingly, I feel that you’ll really have to love the unorthodox design of the ROG Phone 2 to buy it over the competition.

Before I talk about the smartphone’s display, here are a few more tidbits about the ROG Phone 2’s design:

1 – The under-screen fingerprint sensor on the ROG Phone 2 isn’t very fast, nor is it exceedingly reliable. Therefore, you will be spending a good chunk of time tapping your thumb on the phone’s display.

2 – On the flip side, the face unlock tech on the smartphone is among the quickest I’ve tested, and it only faltered in pitch darkness.

3 – Much like its predecessor, the ROG Phone 2 ships with Air Triggers on its right-hand spine, which are a set of capacitive buttons. You can use the triggers to elevate your gaming experience as they’ve been designed to mimic the shoulder triggers on controllers of gaming consoles. To use them, simply swipe inwards from the left on any game running in landscape (doesn’t work on games which boot in portrait mode) mode and map any in-game function on the screen to the capacitive buttons. 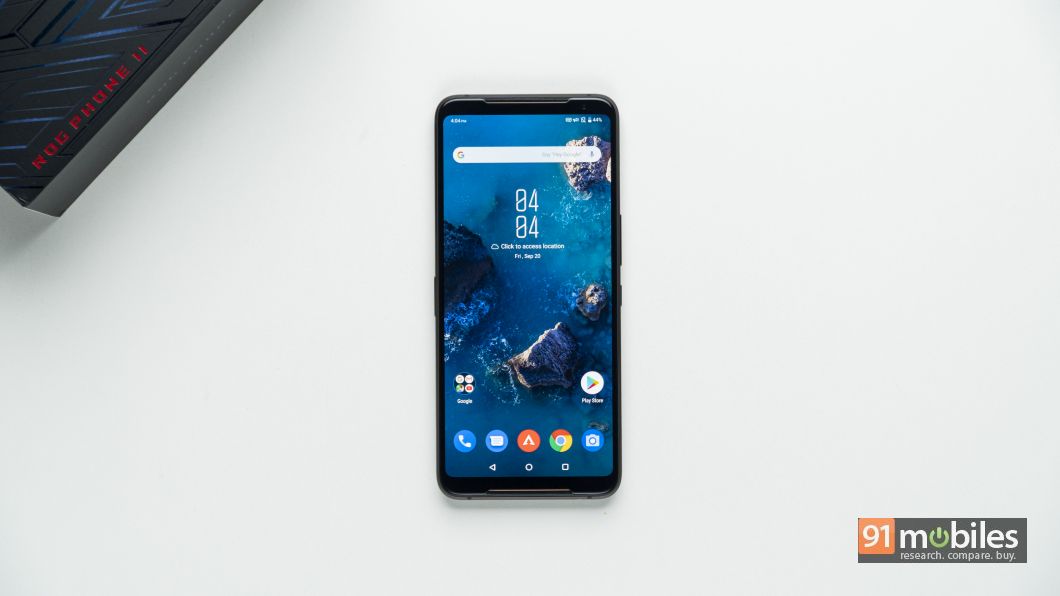 Coming to the display, the ASUS ROG Phone 2 is the only smartphone in the world to feature a 120Hz AMOLED panel, which is mind-boggling to even think about. The screen measures in at 6.59-inches, packs in full HD+ resolution, is 10-bit HDR compliant and ships with a layer of Corning Gorilla Glass v6 on top for protection against scuffs too. In a nutshell, the ROG Phone 2 features the smoothest, punchiest panel in existence. The 120Hz refresh rate is honestly, a pretty big deal as it makes browsing content or navigating around the phone’s UI an absolute bliss – the transitions are quick, fluid and responsive. Furthermore, you’ll also be able to reap benefits of the smartphone’s state-of-the-art panel in select games which support high refresh rates too. 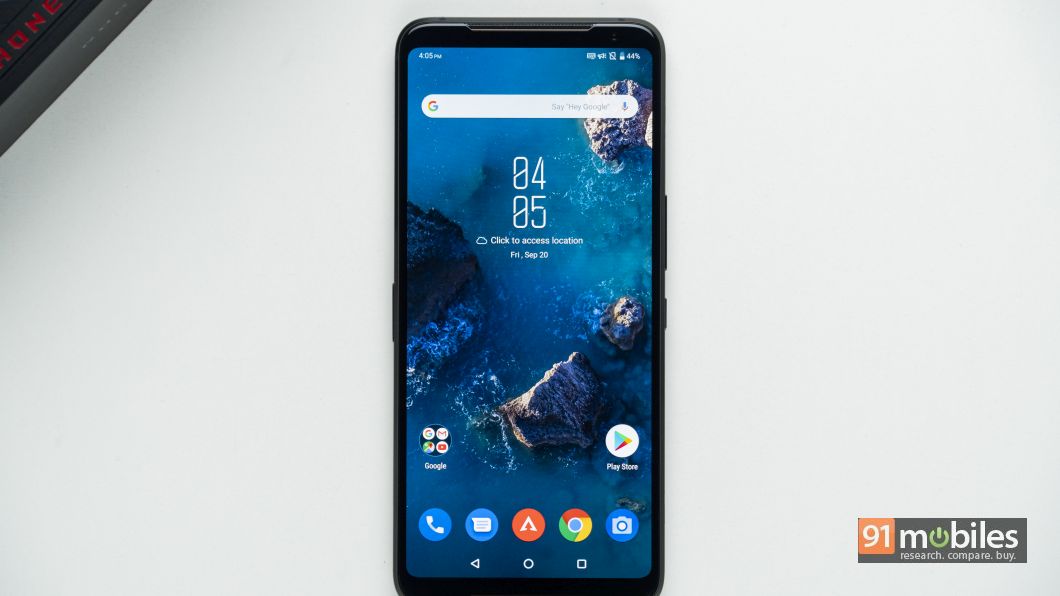 Unfortunately, the display is not without its faults. At night, with the lights turned off, I noticed that the panel exhibited a faint ghosting effect as the pixels took a while to reset to the new colours and interface of an app like YouTube. Consequently, I could still make out the markings which separated one video from another after I’d started watching something. What’s more, under dimly-lit environments, the display flickers, making viewing content on the screen extremely irritating. Provided the company can fix these issues via a software update, the display on the ROG Phone 2 will undoubtedly be the best in the business. Until then, I’d be more inclined to recommend buyers OnePlus’ latest smartphone, the 7T (review), which comes with a 90Hz, flicker-free panel.

My biggest gripe with the ROG Phone was that the smartphone didn’t offer good imaging capabilities. While the scenery has bettered with the ROG Phone 2, I’m afraid the handset still doesn’t do enough to compete with the OnePlus’ and Redmi’s of the world as far as shooting prowess is concerned. But, before I dwell into that, let’s get the camera specs out of the way first. 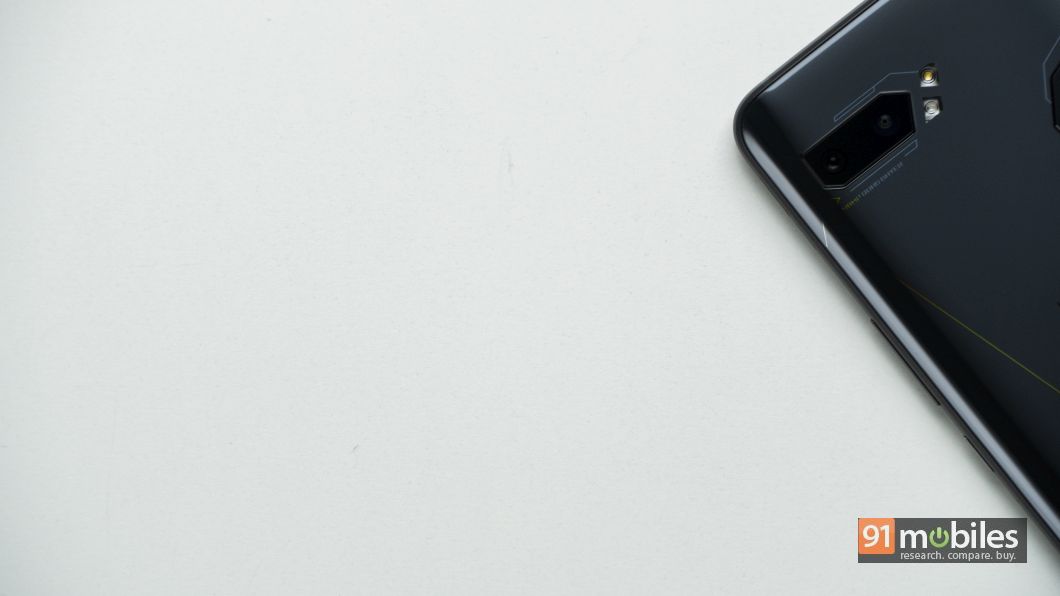 The ROG Phone 2 is backed by a 48MP Sony IMX586 sensor and a 13MP ultra-wide sensor towards the back, with f/1.79 aperture and a 125-degree field of view respectively. For selfies, the smartphone ships with a 24MP sensor with f/2.0 aperture. As far as the device’s video-recording capabilities are concerned, the ROG Phone 2 features 3-axis EIS (electronic image stabilisation) for the rear cameras and can record in 4K 60fps with the main 48MP shooter. You’ll also get the option to record slow motion videos at 480fps and HD resolution on the phone.

With that, it’s time to talk about my experience with the smartphone’s camera setup. I’ve summarised it in the form of bullet points, so have a look –

1 – The ASUS ROG Phone 2 clicks good photos during the day with ample vibrancy and details. The handset offers two HDR modes namely HDR+ and HDR++, the likes of which you might’ve seen on the brand’s 6Z. Now, during my testing, the HDR++ mode clicked images with a flatter colour tone and therefore, I didn’t find much use for it. Regardless, with the HDR+ turned on, the handset clicked pleasing photos during the day which were rich in details and colours. The dynamic range was good-enough too, however, the handset did bring up the highlights a touch more every now and then.

2 – The ASUS ROG Phone 2 has been priced to match OnePlus’ 7T and therefore, it was only right to pit the device against the latter’s triple camera setup. Right off the bat, the 7T will offer you more versatility in the imaging department but it’s also a significantly better shooter too. Honestly, OnePlus nailed the camera on its latest flagship and it’s going to be difficult for any phone to go toe-to-toe with the 7T.

3 – The ROG Phone 2’s cameras failed to impress me after the sun had set. While the phone’s night mode did manage to keep the noise to a minimum, shots taken at night still had considerable lens-flaring along with less than ideal details. 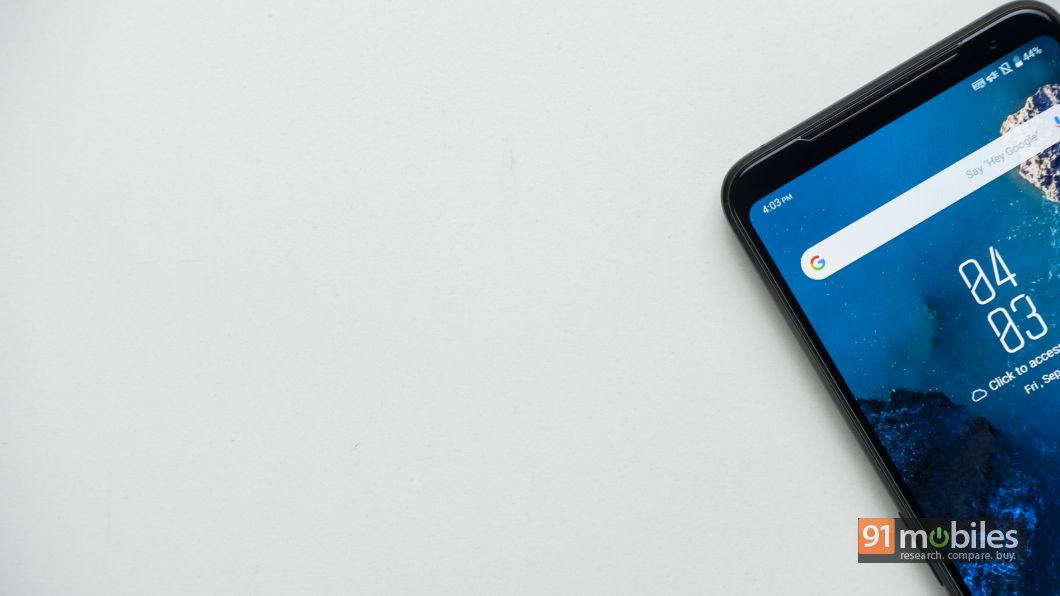 4 – On the bright side, selfies taken on the ROG Phone 2 are pretty impressive. The smartphone’s 20MP shooter clicked tonally accurate photos during the day, and thanks to the bundled screen-flash tech, managed to output serviceable photos even at night.

5 – The assisting wide-angle shooter on the ROG Phone 2 did a good job of capturing more of the scene too. The shooter had minimal distortion towards the edges of the photos, so no complaints here.

The ROG Phone 2 has been touted as a beast of a gaming smartphone and the device has the specs to back its reputation too. Underneath its chassis, the device is powered by Qualcomm’s Snapdragon 855+ processor which works alongside either 8GB or 12GB of RAM. Correspondingly, buyers will get either 128GB or 512GB of uber fast UFS 3.0 storage with the phone. Unsurprisingly, the handset performed exceptionally well during my testing – applications opened quickly, multitasking was a breeze and there was no game on the Play Store the smartphone couldn’t run at the highest graphics preset. 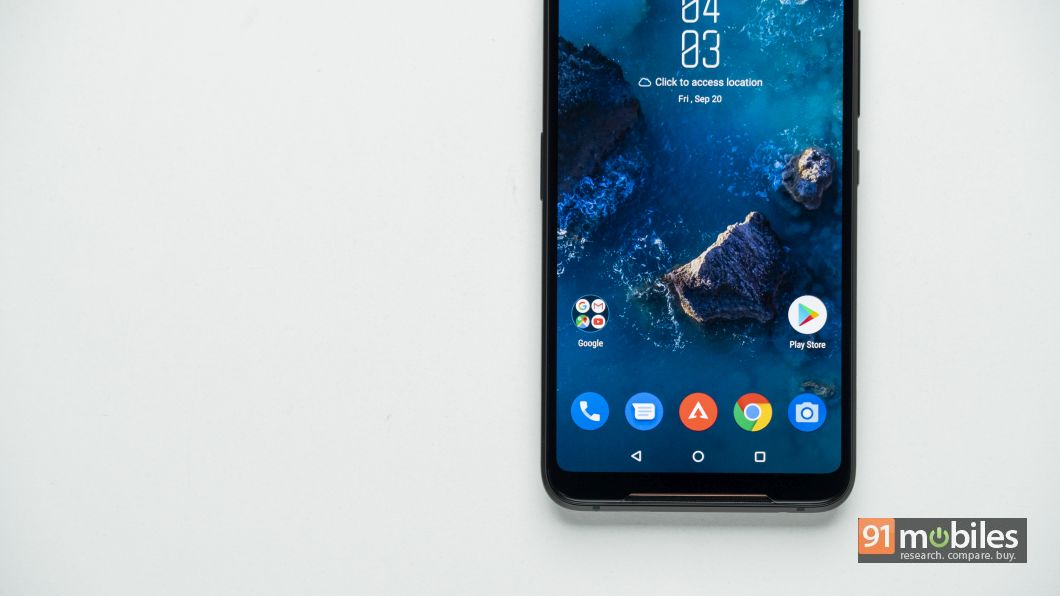 The software has matured over the year too and instead of booting a gaudy gaming theme, the ROG Phone 2 now gives buyers to opt for something subtler instead. The handset boots Android Pie and for the most part, offers a clean UI free from bloat. You do get some apps bundled with the phone, including the brand’s Armoury Crate app which can be used to browse through the game library, customise RGB lighting on the device and configure the sensitivity of Air Triggers. Other than that, the software on the ROG Phone 2 doesn’t offer anything out of the ordinary. As I mentioned previously, the ROG Phone 2 is quite chunky which can be accredited to the smartphone’s massive 6.000mAh battery. Consequently, provided you’re not playing PUBG or other intensive titles on the phone for hours at end, you can comfortably use the device for close to two days off a single charge. Suffice it to say, you won’t find much use for your power bank should you upgrade to the ROG Phone 2.

Why pay in full when you get EMIs with 0% interest?
Buy ASUS ROG Phone 2 now and pay later in flexible EMIs!
Know More

The ASUS ROG Phone 2 starts at Rs 37,999, which is almost half of its predecessor’s launch price. That alone conveys ASUS’ conviction to disrupt the affordable flagship space and get prospective buyers under its umbrella. What’s more, the handset delivers for the most part too and ships with a stunning display, edgy design, a mammoth battery pack and oodles of performance under the hood. 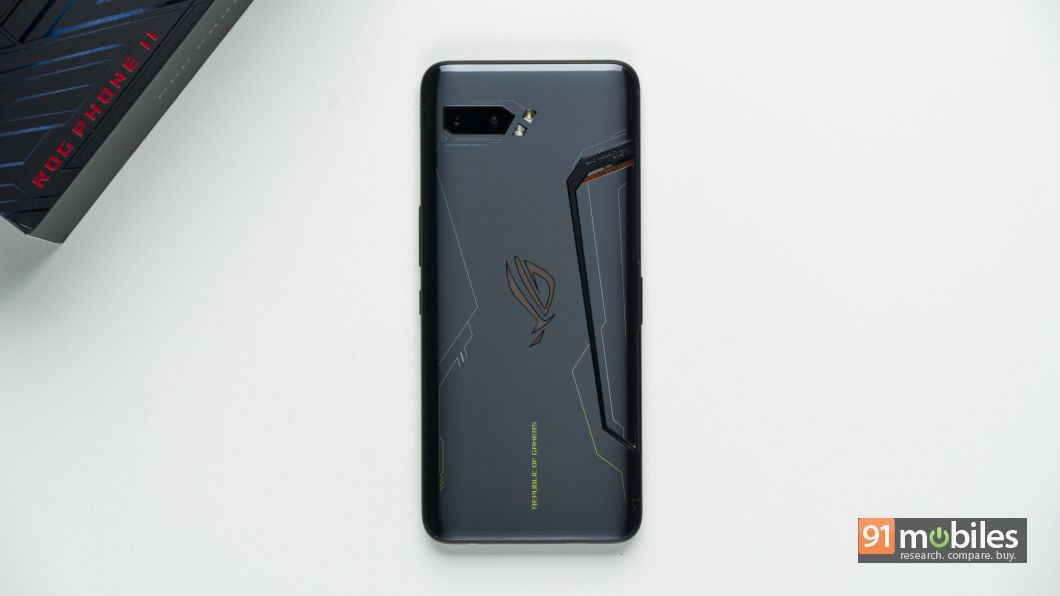 Unfortunately, the smartphone’s cameras still leave a lot to be desired and as good as its screen is, I can’t turn a blind eye on the ghosting and flickering issues. Therefore, despite putting forth a compelling package, I still feel that buyers will be better off with the OnePlus 7T as it’s a more well-rounded product. However, if you want something out of the ordinary, then the ROG Phone 2 might be what you’re looking for.