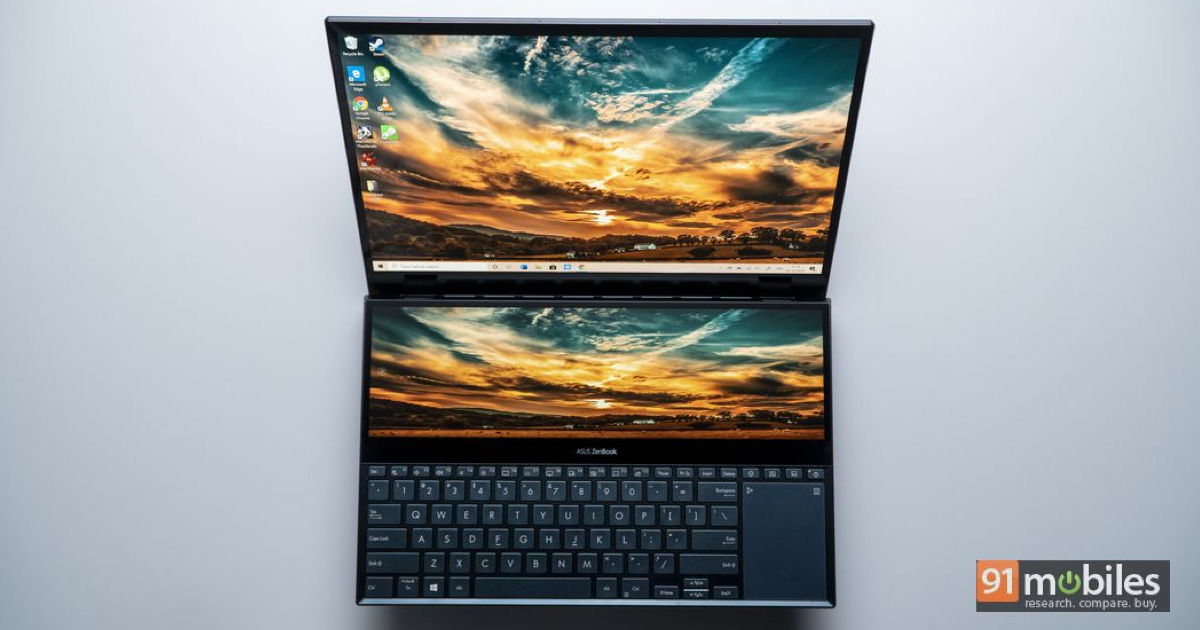 “Our take on ASUS’ latest concoction – the ZenBook Pro Duo”

Dual-screen smartphones still have ways to go, but ASUS has seemingly perfected the two-display laptop. Last year, the company introduced ZenBooks with a touchscreen built into the trackpad and if you thought that was pushing the envelope, then you clearly undermined the Taiwanese giant. 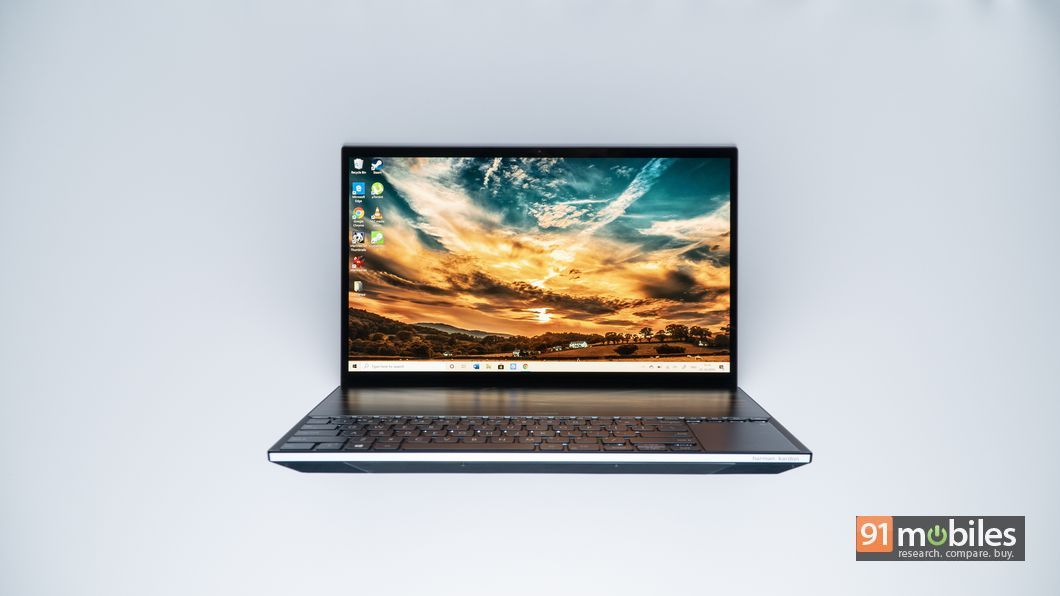 I say this, because the company’s flagship laptop this year – namely the ZenBook Pro Duo – features not one, but two touchscreen 4K displays, paving way for a multitude of outlets to channel your creative self. I’ve spent over two weeks using the machine as my daily driver and here’s why, barring a few caveats, it’s the best laptop to have launched in 2019.

The ASUS ZenBook Pro Duo cuts a handsome package with its brushed aluminium lid and Celestial Blue hue but the star of the show is undoubtedly the laptop’s two-display setup. Upon opening the laptop’s lid, you’ll be greeted by a 15.6-inch 4K OLED panel which in itself, is a thing of beauty. But, as you shift your glance towards the base of the unit, you’ll notice a massive black slate measuring in at 14-inches which too, sports 4K resolution and is dubbed the ScreenPad Plus. With the machine powered on, the two screens look incredible. 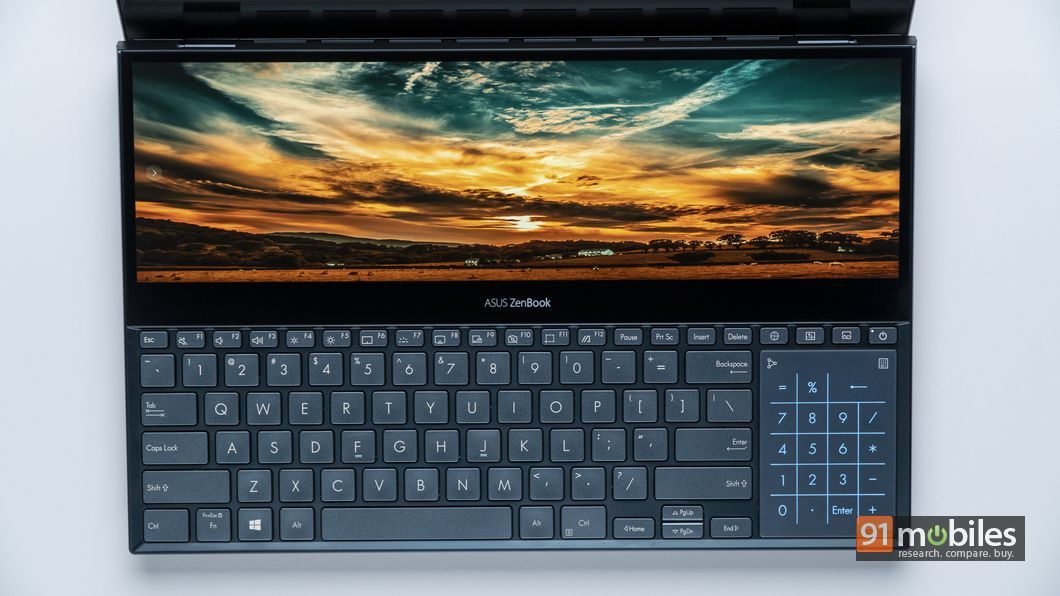 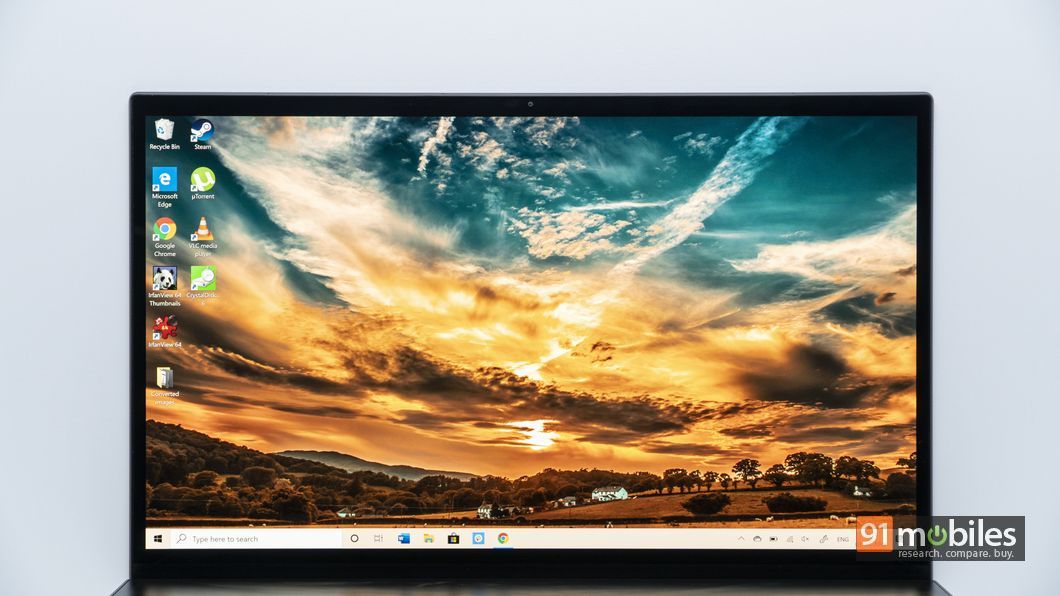 Now, if I were in your shoes, I’d be skeptical about the design of the Pro Duo too. And, I’ll admit, using the secondary display to maximise productivity does take some time getting used to. For one, the screen is upward facing and secondly, it sports a matte finish, making it difficult to comprehend what’s on the display unless you’re glancing at it head-on. Even with the laptop’s ErgoLift mechanism (which lifts the keyboard up by a couple of degrees), you’d still have to flinch from time to time to consume the content on the screen. 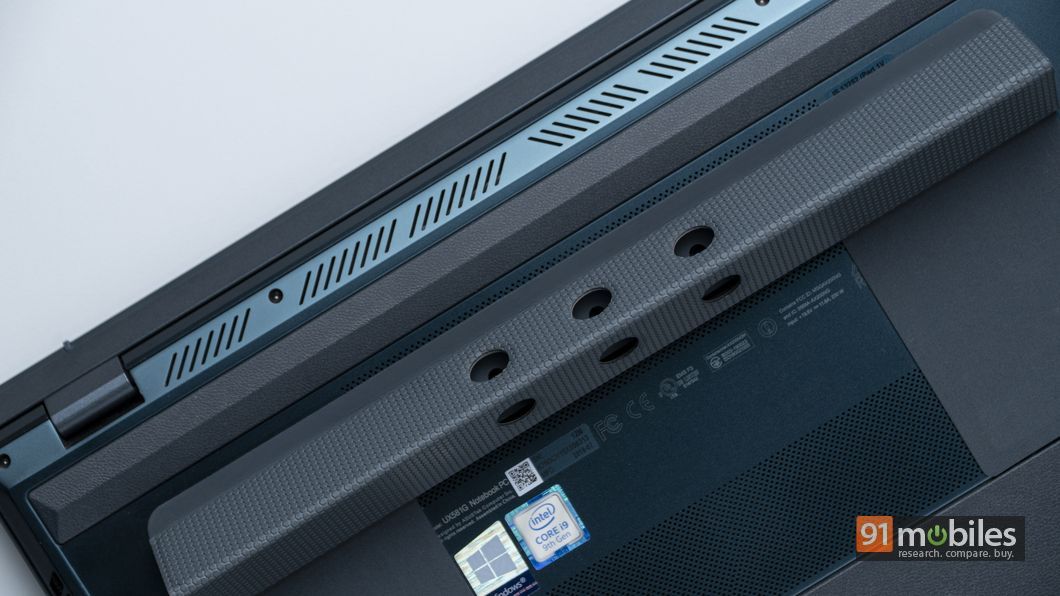 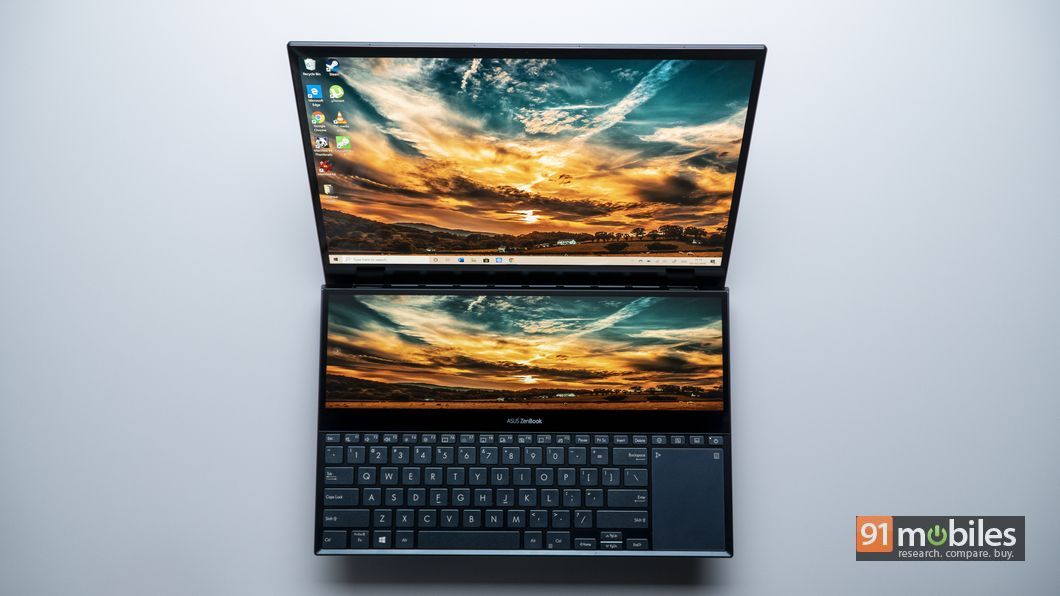 Despite its caveats, I feel that the dual-screen implementation on the ZenBook Pro Duo is the best the industry has to offer yet. You see, much like a two-monitor setup, you need to use the secondary display on the laptop as an added utility. Therefore, instead of loading my primary, need-of-the-hour apps on the panel (Word and Chrome), I used the secondary screen to keep a tab on my colleagues’ messages on Slack, my Twitter feed and to sift through my music playlists on Apple Music. What’s more, the company offers a lot of cool features to make the most out of the ScreenPad Plus too. 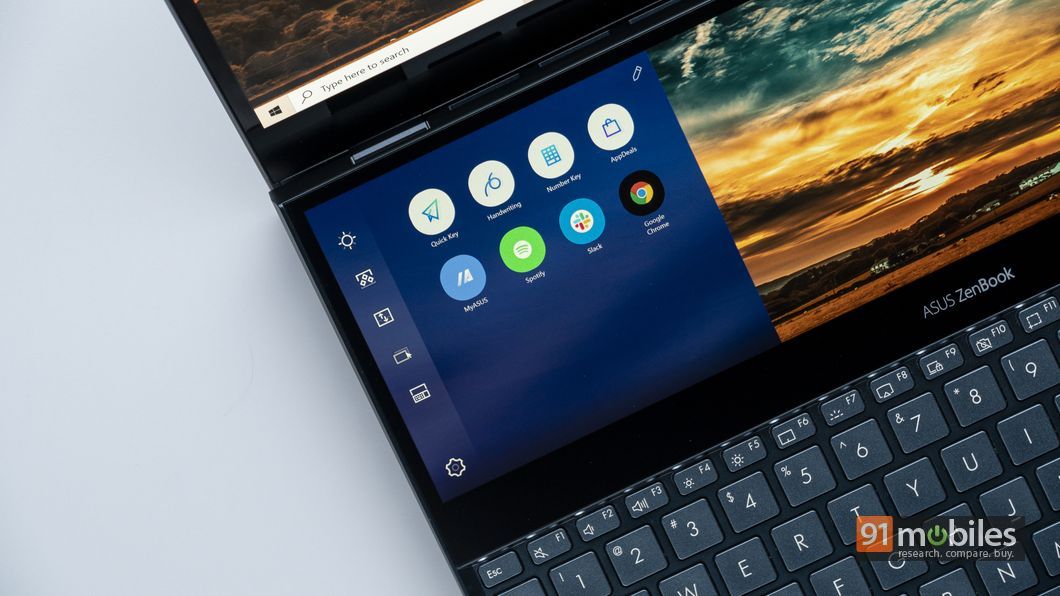 For one, you can create groups of certain apps and launch them at the tap of a button. Therefore, instead of opening Chrome, Slack and Word one after the other and assigning them space on the two displays, the laptop would automatically do it for me. Furthermore, ASUS is also working with app makers to boost ScreenPad Plus’ functionality. In fact, the laptop ships with a dedicated Spotify app, which is neat. Lastly, the brand also offers a bundled utility which automatically highlights zones where an app could fit on the ScreenPad Plus. 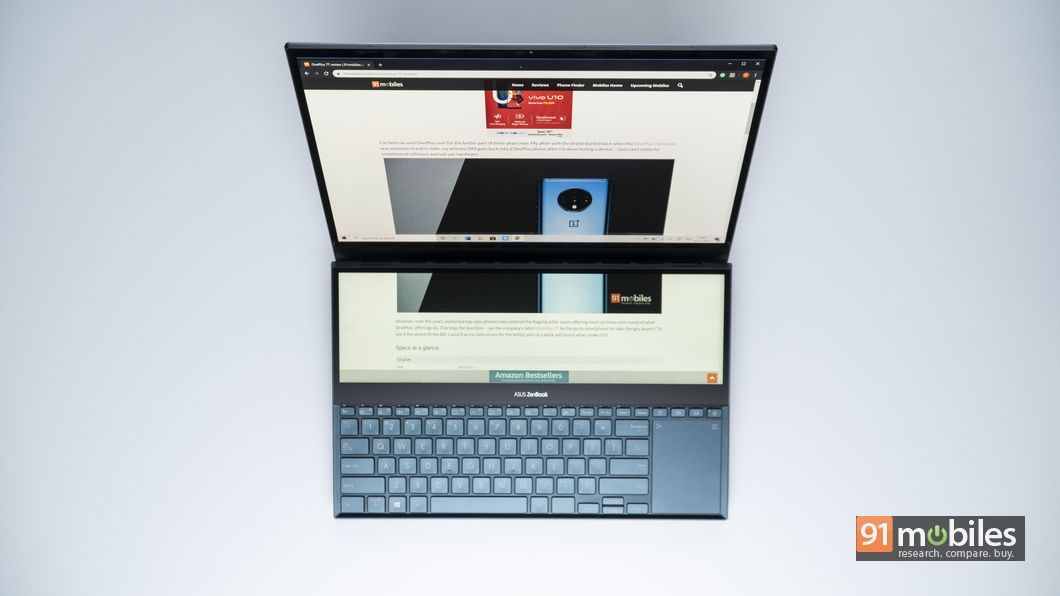 You can even combine the two displays into one giant monitor which although looks cool in photos and B-roll, doesn’t really better a user’s end experience. So, to sum up – is the ScreenPad Plus perfect? Heck no. But, I’m willing to let its quirks slide as it offers a one of a kind setup which with a little tweaking, can match if not thwart an externally connected monitor. 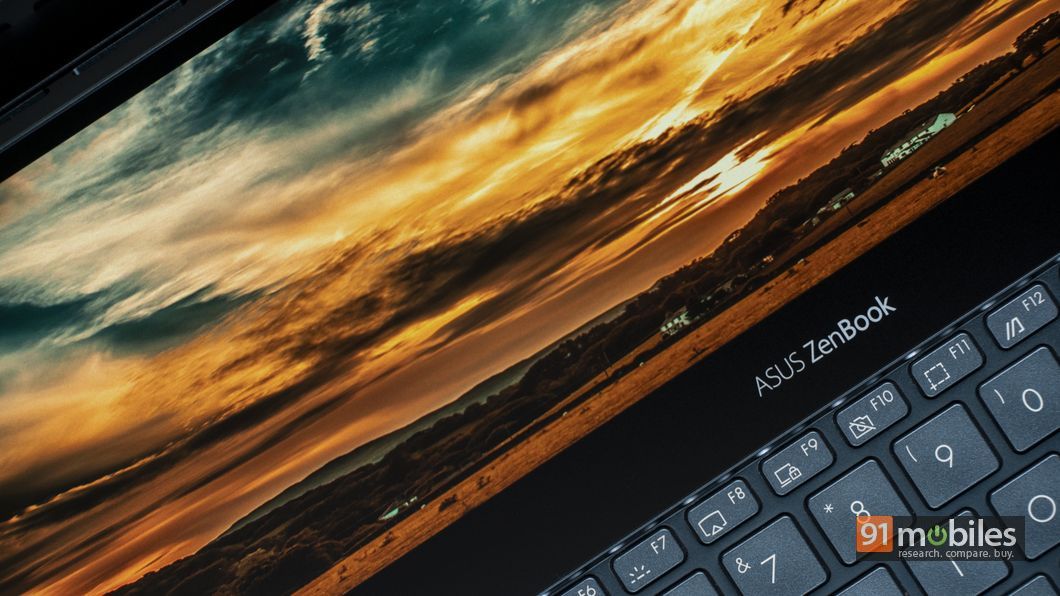 With that out of the way, how good is the primary display on the ZenBook Pro Duo? In a word – it’s outstanding. The panel is OLED in nature so you can expect blacks to be really black and not greyish. Moreover, the display gets plenty bright and covers 100% of DCI-P3 colour gamut, making it ideal for creators on the go*.

As for the asterisk, the ZenBook Pro Duo is quite chunky and heavy. In fact, at 2.5kg for the laptop and a couple of hundred grams for the brick, you best get a gym membership when you buy the ZenBook Pro Duo too. Thankfully, the unit does somewhat make up for its beefy profile by offering a plethora of ports and with the unit, buyers will get a USB-C Thunderbolt port, two USB 3.1 Type-A connectors, an HDMI 2.0 slot, an audio jack, and a barrel-style DC-in port. Unlike its smaller sibling, the Pro Duo cannot be charged using the USB Type-C port as it features a power-hungry RTX GPU from Nvidia. Regardless, the port selection on the laptop is excellent and I have no complaints with the machine in this department.

Much like the company’s Zephyrus line of laptops, the ASUS ZenBook Pro Duo features an ill-placed keyboard and trackpad setup. You see, in order to make room for the secondary screen, the keyboard has been pushed downwards and correspondingly, the trackpad has been moved towards the right-hand side. Thankfully, the ZenBook Pro Duo does ship with a separate palm rest which ensured I could type comfortably on the machine. What’s more, the keys are adequately tactile and well-spaced too, ensuring your fingers won’t be fighting for space. My only qualm with the bundled palm rest is that it doesn’t latch on to the base of the laptop magnetically and therefore, slips on the desk from time to time. 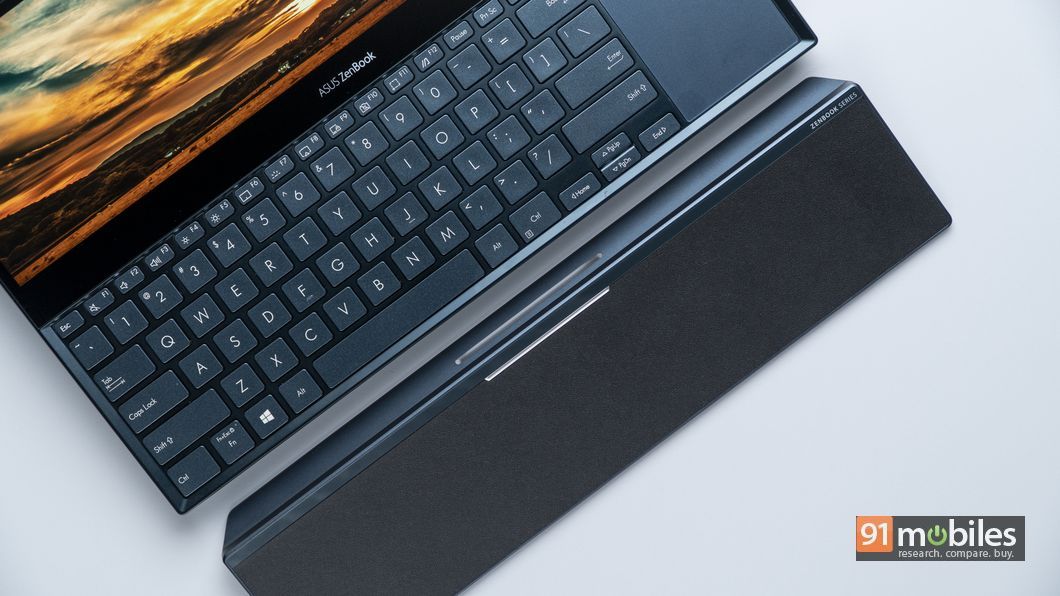 Unfortunately, I couldn’t acclimate myself to using the laptop’s trackpad during my stint with the machine. Therefore, I’d recommend you use an external mouse if your workflow involves jumping in and out of apps and using precise pointer movements. I’d also like to point out that the laptop ships with a stylus, though I didn’t find much use for it. That said, the pen input was fairly accurate in applications like Google Chrome and Word, so make of that what you will. 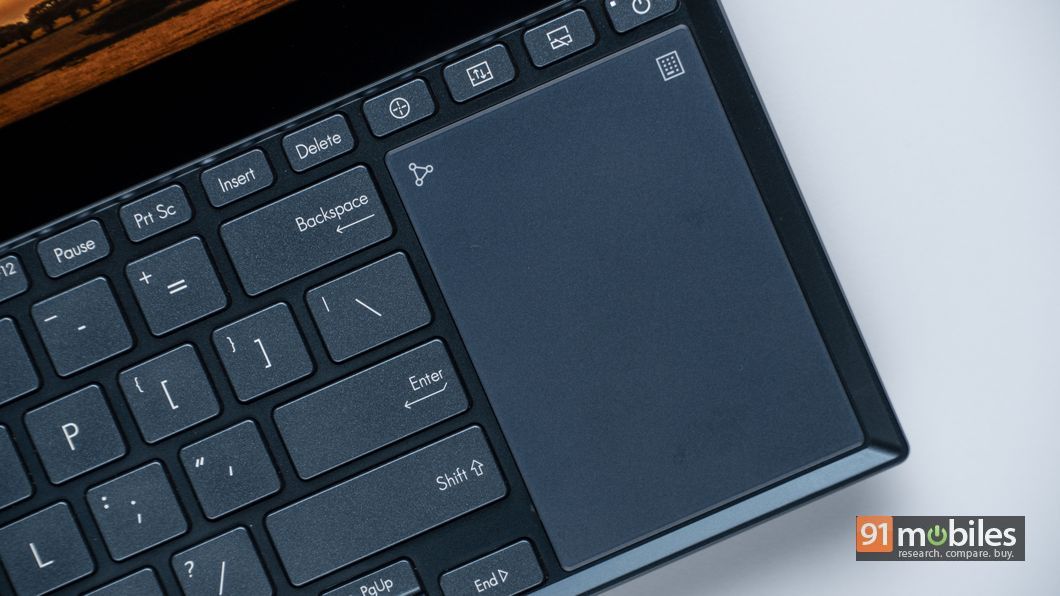 Going by the ZenBook Pro Duo’s size, you’d think the laptop shipped with powerful speakers. On the contrary, the laptop offers tinny speakers which don’t get reasonably loud. So, you can all but forget about watching movies with friends on the machine.

The ASUS ZenBook Pro Duo is backed by Intel’s Core i9-9980HK processor which is among the most powerful CPUs you can have on a laptop. The processor has been paired with 32GB of DDR4 memory, a terabyte of uber-fast SSD storage and an Nvidia RTX 2060 GPU with 6GB of GDDR6 VRAM. Now, you don’t need to be a computer expert to know what these specs entail – rapid, no-compromise performance. And sure enough, during my time with the machine, I couldn’t find any faults in the ZenBook Pro Duo’s performance, be it whilst running synthetic benchmarks, gaming or just going about my workflow. 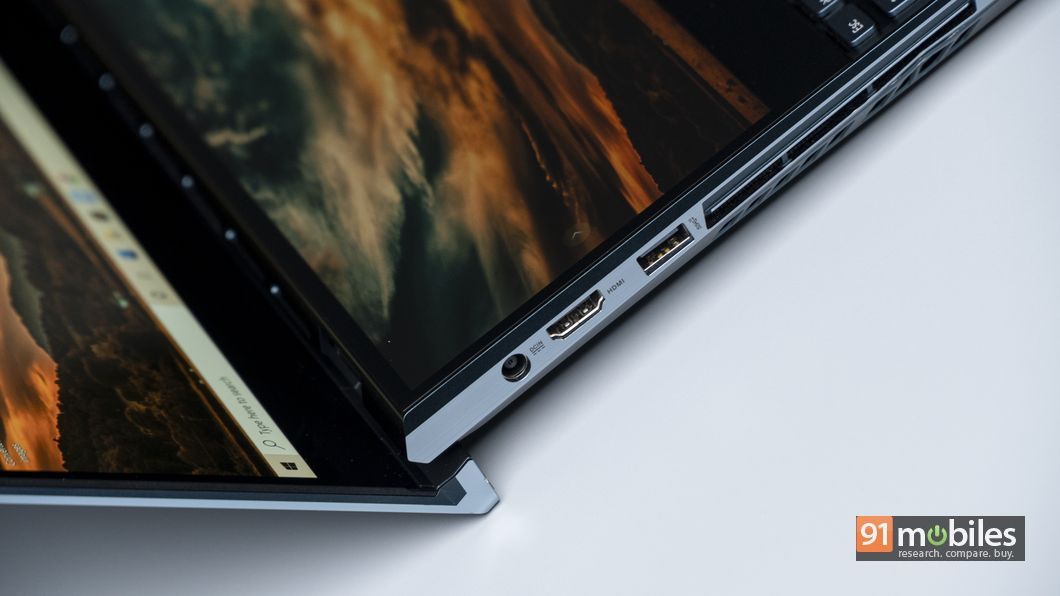 What’s more, thanks to its relatively thicker chassis, the ZenBook Pro Duo keeps the temperatures under check and despite running power-hungry apps like CineBench R20 on the machine, the CPU temps never spiked over 70-degrees. Adding to the list of pros, the cooling fans are tolerable even when they’re chugging away in Turbo mode. To give you a better picture of the laptop’s superb performance, do take a look at some of the benchmark snaps I’ve attached below.

I had my concerns about the ZenBook Pro Duo’s battery life even before I received the unit for review. After all, keeping the lights on two 4K displays and having to power components like an RTX 2060 GPU has got to take its toll, right? Well, unsurprisingly, you cannot take the ZenBook Pro Duo anywhere without its power brick as the laptop barely lasted me two hours off a single charge. Moreover, in our battery eater pro test, the laptop drained in just 82 mins, which is appalling even from a gaming laptop’s standard.

For its asking price of Rs 2,09,990, the ASUS ZenBook Pro Duo is an expensive proposition but the laptop justifies its price tag by offering a one-of-a-kind design which is as beautiful, as it is functional. Sure, the speakers could’ve been louder and I would’ve liked better battery backup, but on the whole, the ZenBook Pro Duo offers a dual-screen setup which is a godsend for creators. 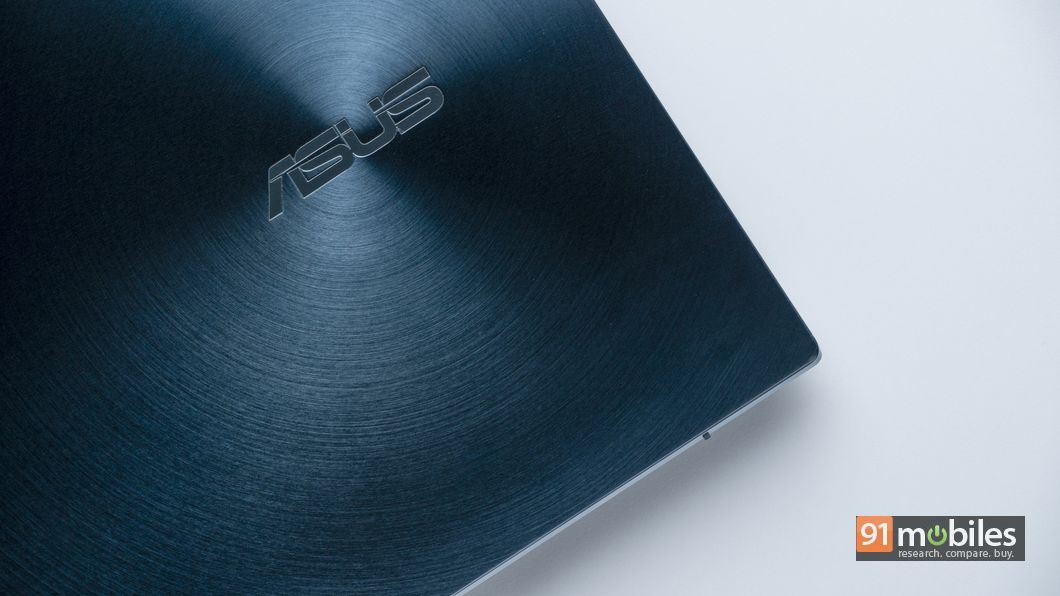 Suffice it to say, the ZenBook Pro Duo isn’t for everyone but it beats having to lug around an external monitor in your travel suitcase.